As we come to end of what has been some historic and wild trading in the month of August, this is what is really driving the price of gold higher.

This Is What Is Really Driving Gold Higher
August 31 (King World News) – Jeff Snider at Alhambra Partners:  “It isn’t inflation which is driving gold higher, at least not the current levels of inflation. According to the latest update from the Bureau of Economic Analysis, the Federal Reserve’s preferred inflation calculation, the PCE Deflator, continues to significantly undershoot. Monetary policy explicitly calls for that rate to be consistent around 2%, an outcome policymakers keep saying they expect but one that never happens.

For the month of July 2019, the index increased 1.38% year-over-year. That’s only slightly above June’s 1.33% advance. After having achieved the inflation target for all of eight months in 2018, despite an unemployment rate at a half-century low they’ve missed the mark now in each of the nine months following. 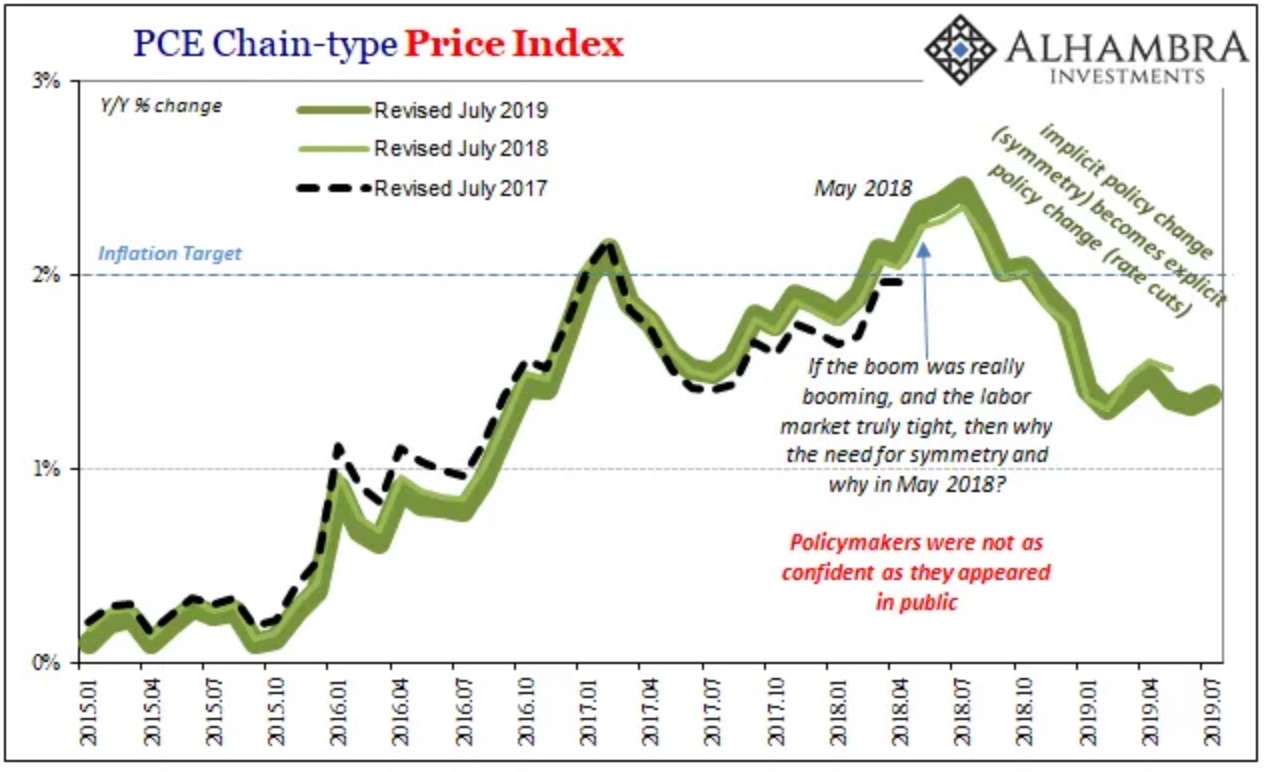 The so-called core inflation rate, the deflator stripped of energy and food prices, increased just 1.58% in July. The rate is basically unchanged since January even though it was during this time when the labor market (allegedly) reached its epic level of tightness. 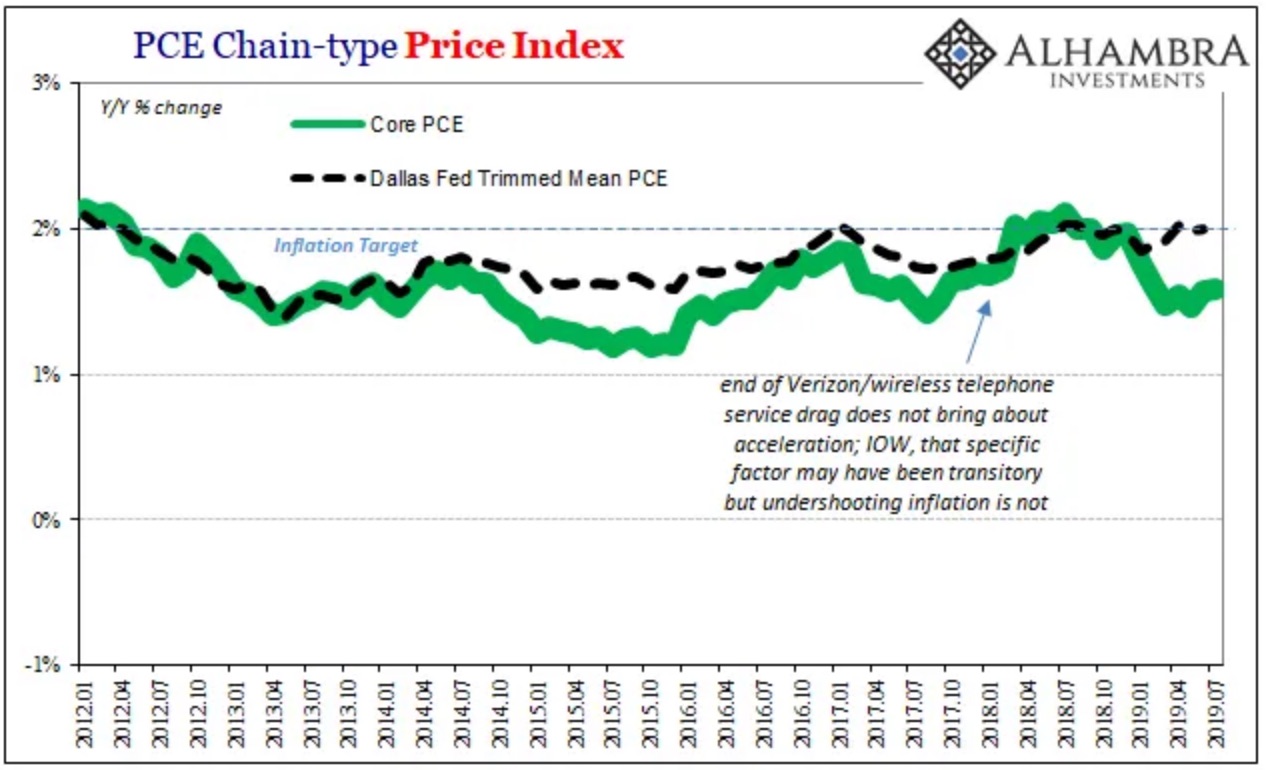 No matter how much Fed officials keep insisting that inflation will (someday) rise toward 2% and stay there, the evidence right now gives them plenty of justification should they wish to change tune. Currently, Jay Powell’s FOMC is sticking with a one-and-done rate cut plan in part to stay consistent with their overarching message of an otherwise strong economy which is experiencing nothing more than transitory cross currents.

Should the economy worsen, as most forward-looking indications suggest, there isn’t any wall of consumer prices to hold officials back from responding – even “forcefully” responding.

This is the new defense line for the bond/dollar bears. Maybe the BOND ROUT!!! is dead in the one sense, though perhaps able to be resurrected by something else. Interest rates in particular will still explode higher, they claim, only this time it won’t be a growth acceleration as they had been saying throughout last year. With growth at least on pause, the only available option left to them is central banks who will have to get creative maybe even crazy.

Having shorted bonds (so much negative duration among the “bond kings”), they desperately need the inflation for their positions to payoff. If the economy and the unemployment rate refuse to provide them with it, then why not an overzealous Fed?

And that might appear to be consistent with the noise coming from the gold pits of Chicago and London. Gold is up sharply in 2019 and everyone knows it is an inflation hedge. Thus, since it can’t be current levels of inflation then gold must be anticipating a pickup on the other side of the horizon.

Like most of these theories, it sounds plausible. But is gold really an inflation hedge?

It’s a question that central bankers and mainstream Economists love to ponder. For one reason, they are outright hostile to gold (as bonds). They really dislike markets which have the potential to tell the world how much they’ve screwed up.

In December 2009, because it was a very relevant topic the late Marty Feldstein of the NBER talked about gold and its presumed worth against inflation. Many early critics of QE, those who were sadly taken seriously, were against it because it was Weimar Germany. Damned money printing, a charge supposedly confirmed by the rising gold price.

Traveling through Dubai, of all places, Dr. Feldstein marveled at the flourishing trade in gold coins taking place right at the airport. How stupid, he thought (I’m paraphrasing, of course).

When you go back and review them, his rough numbers all check out. I started in November 1979 (below) because that was the last month when gold was close to $400 as in Feldstein’s example, but otherwise it turned out just as he described. NOTE: to stay consistent, I’m using the CPI in the following examples rather than the PCE Deflator. 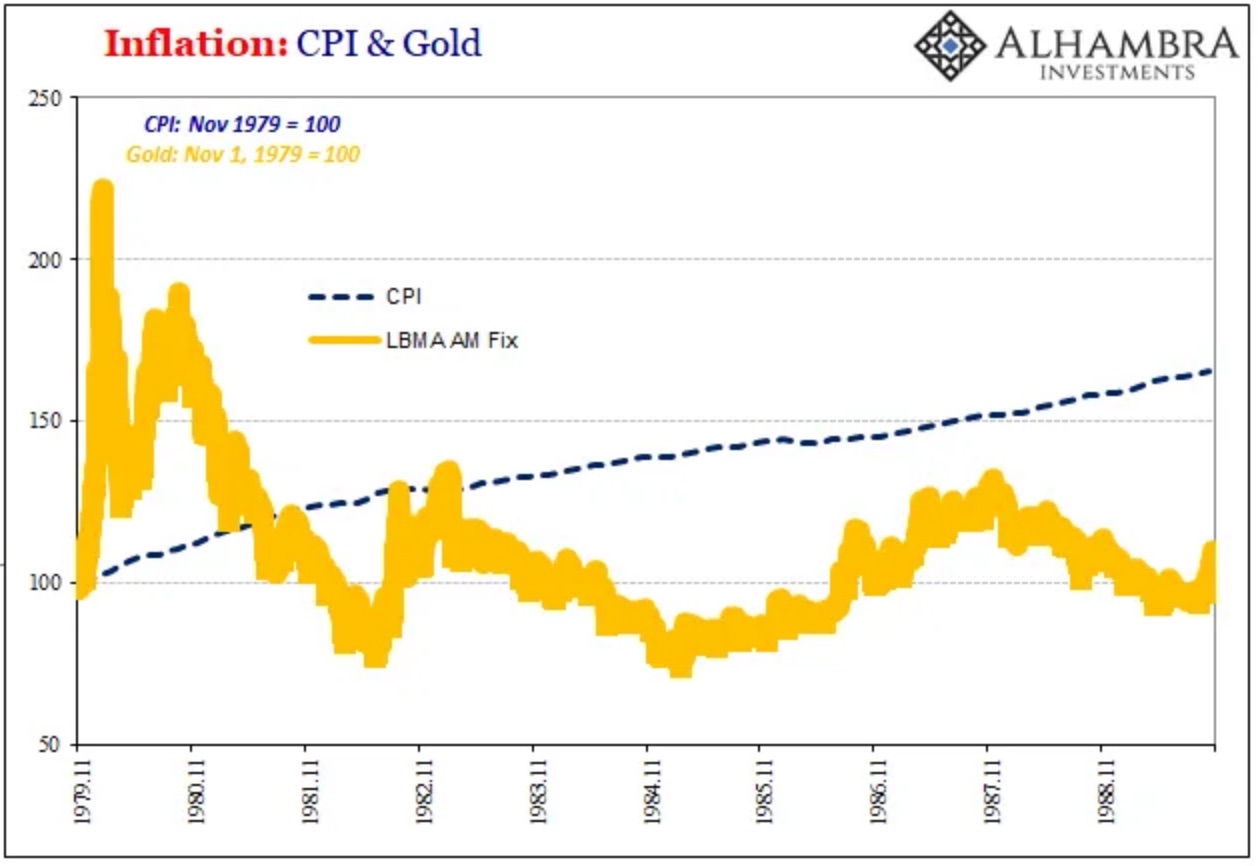 It’s pretty obvious that gold didn’t hedge against more mundane (compared to what had just happened up to 1980) inflation increases. Bullion isn’t very likely to help you much when the world thinks everything is basically fine. The relatively tame consumer prices of the Great “Moderation” fit with the conventional impressions of the time.

Central bankers had everything under control, or so it was widely believed.

Gold sure had been a godsend the decade before, though; at least for anyone who did get their hands on some. It wasn’t by accident that Feldstein started the clock in 1980. The Great Inflation, as opposed to the mainstream perception of the Great “Moderation”, very, very different story. 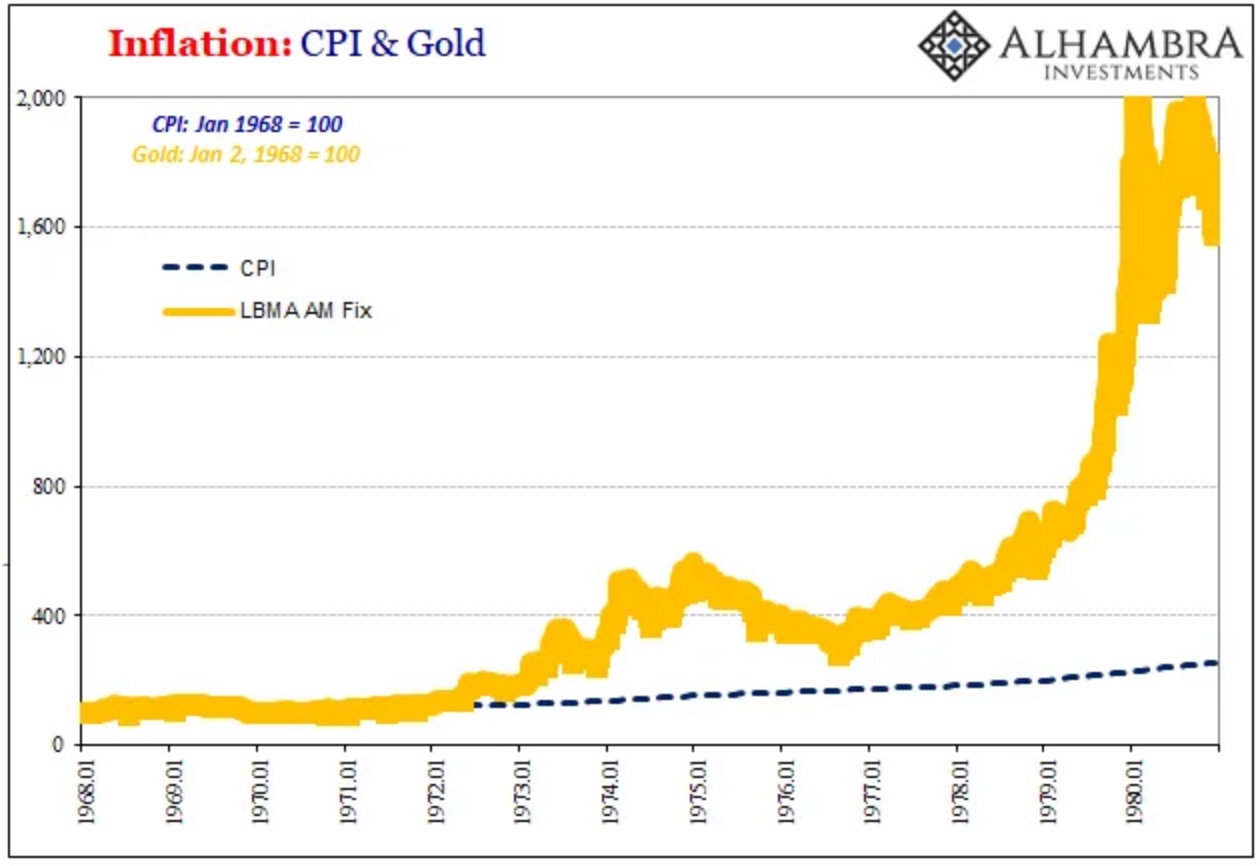 Even though consumer prices more than doubled, closer to tripled, between 1968 and 1980, gold beat them by a country mile. It had provided a lot more than just useful protection against a monetary system run amok, the same system we were told was being looked after by our best and brightest minds.

In other words, even on the inflation side we have to qualify gold’s value as a hedge. It doesn’t protect against inflation shifting from one moderate level to another; say, from around 1% to 2%. Or even 3% and 4%. As is clear on the chart above, gold skyrocketed when inflation was pitching double digits – meaning an economic situation that had gotten way out of hand despite the “best” efforts of officials.

It wasn’t protection against the accumulation of small errors, it was in demand for the probability of the big one. And in the late seventies, even Congress had figured out that central bankers and Economists had no idea what they were doing. That’s when gold soared; when it was obvious to everyone but central bankers that central banks were failing.

This holds true even in the first decade of the 21st century; the last some Economists still associate with the Great “Moderation.” To most people, there was nothing moderate at all about the middle oughts, in particular. And that’s just when gold popped. 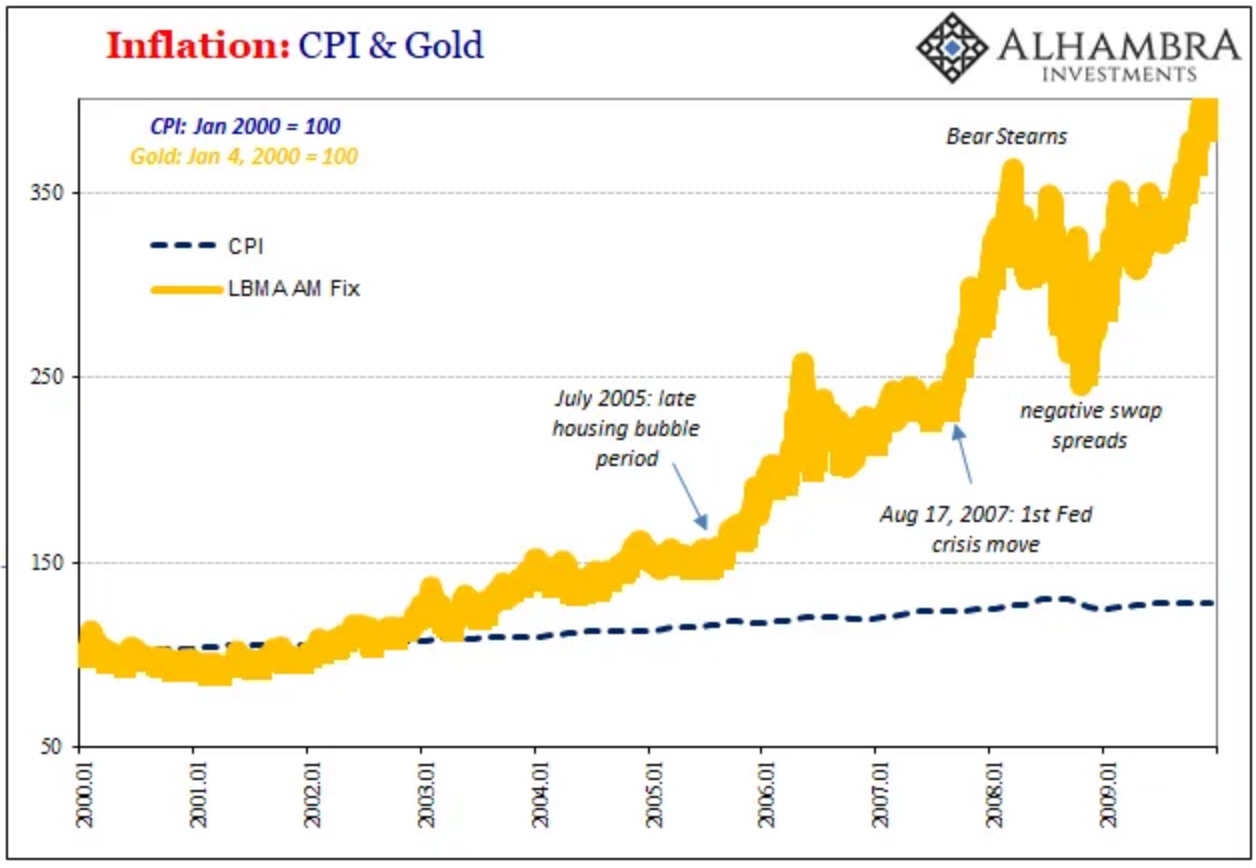 Not only did the metal’s price far outpace consumer price increases (keeping in mind that Feldstein was right when he said gold going back to 1980 had underperformed even as far forward to 2009 when he was speaking) during the decade, more importantly when that really kicked in. 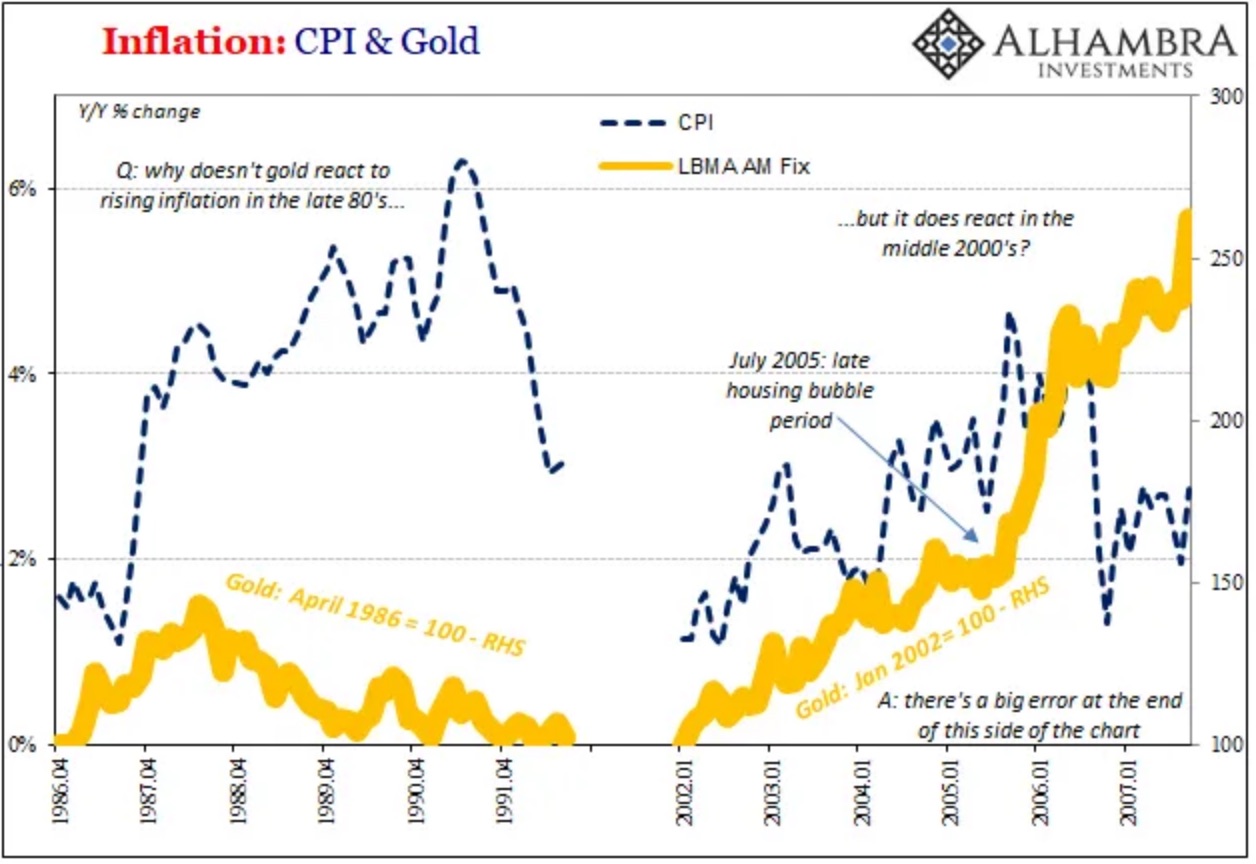 It was much the same as the middle 2000’s – but as Feldstein had pointed out gold barely moved throughout the eighties. Again, gold doesn’t seem to be excited by a relatively minor change in inflation for which both time periods qualify. There must have been some other substantive difference which found its way into the gold price after the middle of 2005.

There are always other factors to consider, of course, but from 2005 onward the world could only be characterized as increasingly dangerous. Alan Greenspan had his bond market “conundrum” and in that same year Ben Bernanke had said there was nothing to worry about in housing. The rest of the world wasn’t nearly so (stupidly) sanguine. There were dangers everywhere you looked.

The risks of a big error had been rising along with the CPI. It was the former which grabbed the gold market, not the latter. This sort of fear would be amplified after August 17, 2007, turbocharging gold, when the Fed made its first crisis move (the FOMC reduced the rate on Primary Credit while begging several big banks to make a public show of borrowing at what used to be called the Discount Window).

By doing something, anything, the gold market saw the Fed confirming everyone’s worst fears. Whereas between 2005 and the summer of 2007, the potential for instability had grown, after August 2007 there really wasn’t much doubt left. The more the Fed was forced into action with new programs the bigger the problem must have been.

Again, the chances for a big error is what gets gold going. The bond/dollar bears would have to be saying that an inevitable super-QE is going to unleash the next Great Inflation.

It isn’t Fed action which is moving the gold price, though. It is the lack of effect in all central bank actions which is bothering more than just gold hedgers. 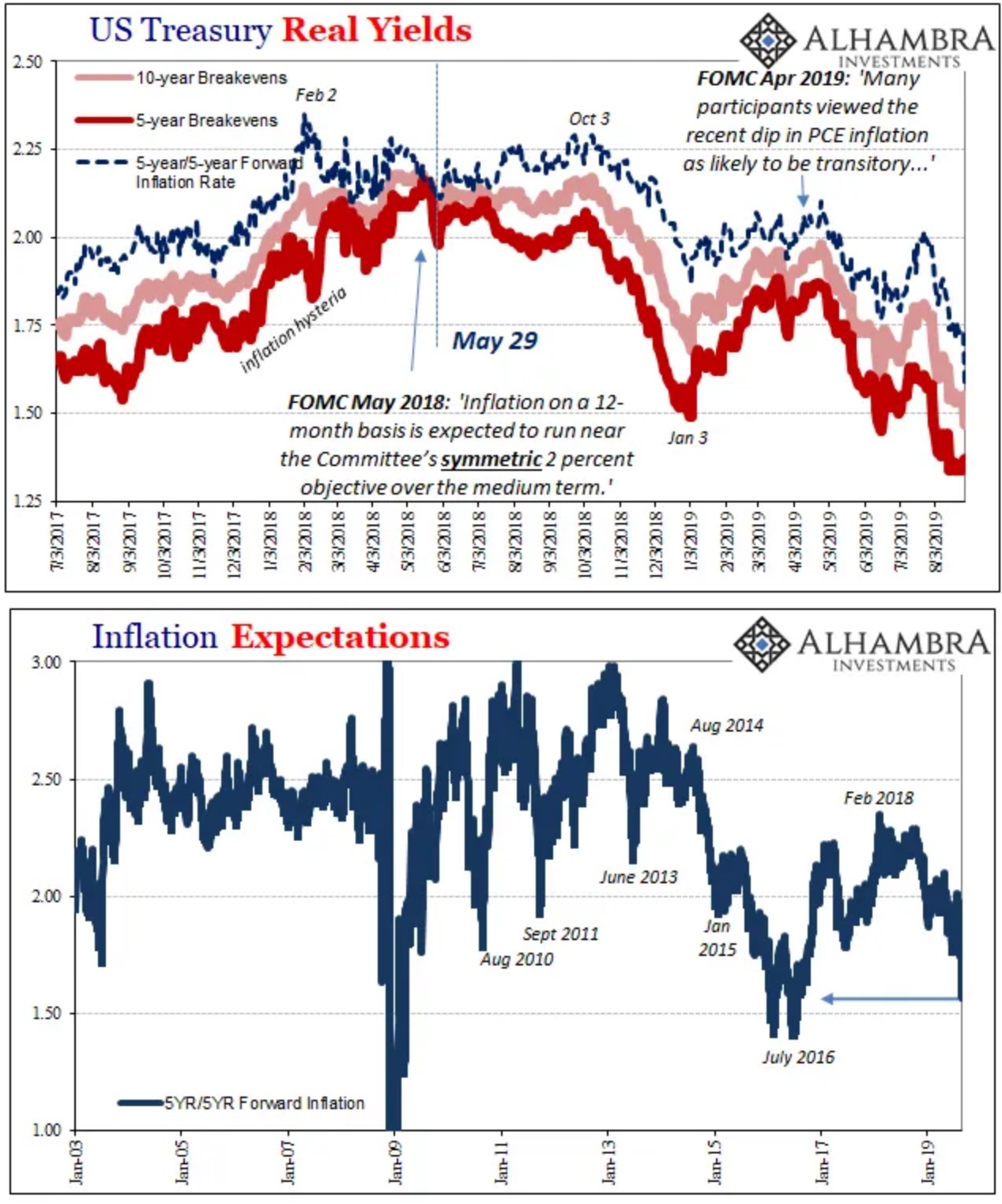 Just as in the bond market, the gold market knows central banks are, outside of sentiment, powerless (moneyless monetary policy). That’s why as gold moves higher inflation expectations – especially longer run expectations – have cratered. Bonds as gold know what’s coming from officials, and yet both are discounting monetary policies because all the evidence says that no matter how big the talk monetary policies are only that.

Like 2008, the big error isn’t the Fed going way too far with stimulus, the big error is in thinking anything the Fed does is stimulus. And that’s precisely the backdrop and predicate condition for serious instability. We know what happens when liquidity turns sour without any effective backstop at all because unlike the mainstream media these markets haven’t the luxury of looking the other way and taking the word of Fed Chairs at face value.

Martin Feldstein was right about the one thing. Gold isn’t an inflation hedge. It is both a signal of, as well as protection against, Economists/central bankers who are particularly prone to making huge errors and the great costs associated with the instability that always comes with them. 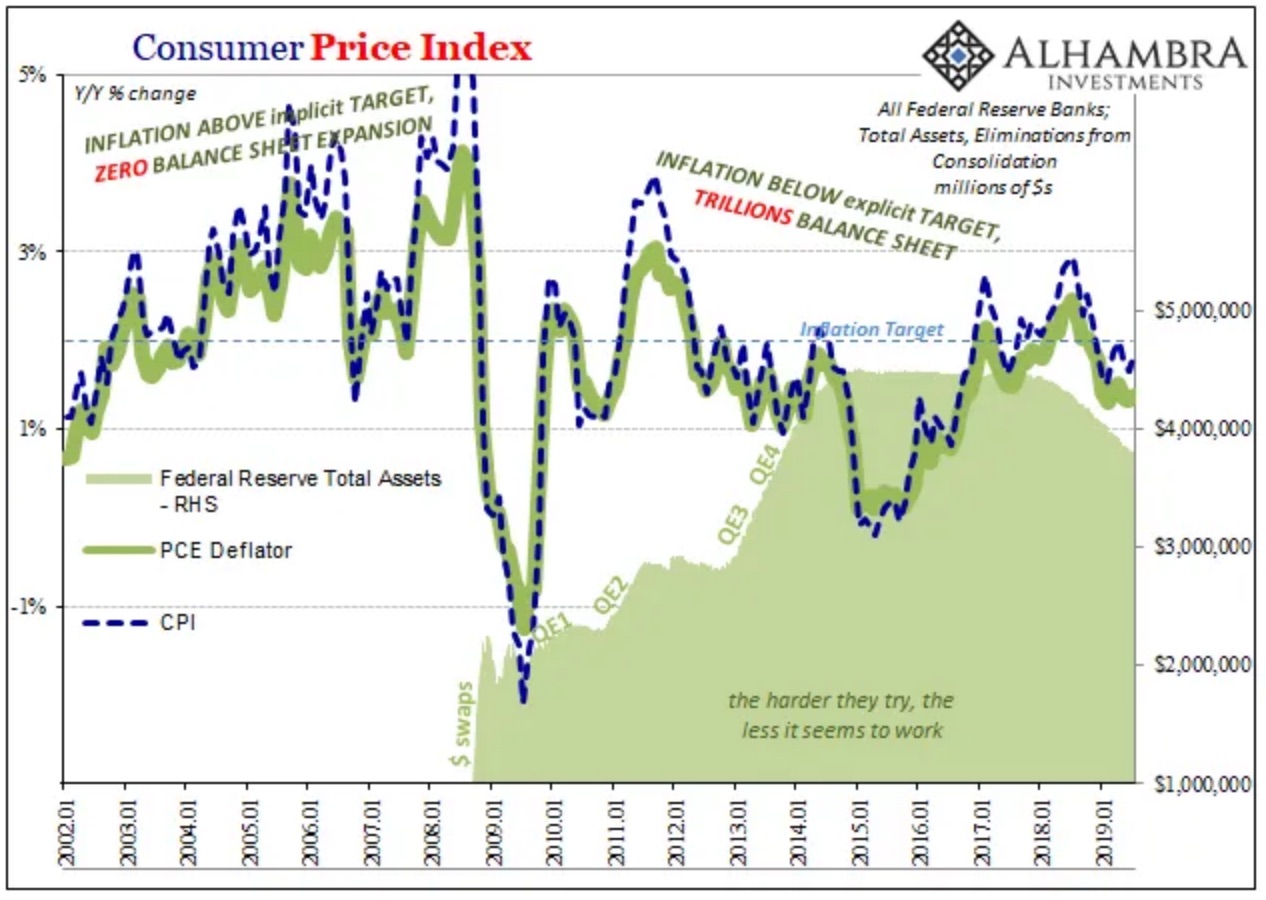 Something To Think About, Plus The Chart Of The Day CLICK HERE TO READ

WOW: Look At This Tumble, Another Record, Banksters, A Little Problem, Plus Gold & Silver CLICK HERE TO READ

Stocks Up But Look At What Is Collapsing, Plus Another Bull Flag For Silver CLICK HERE TO READ