This is very good for gold, plus future of rate hikes.

Future Of Rate Hikes
Peter Boockvar:  Taking a step back from the Friday Fed speak and the Nick Timiraos Fed plug WSJ whisper article, we are essentially back to where we were on September 21st, 2:01pm, one minute after the economic and rate projections from the Fed were released that day. Just before, we expected a 100 bps of rate hikes in total over the remaining two meetings in November and December. What those dots told us was that maybe it would be 125 bps. Fast forward to the CPI report a few weeks later and the market started to price in maybe two 75 bps increases. Now, we’re just back to 125 bps, likely 75 bps next week and 50 bps in the one after. Either way, the Fed is getting to their 4%ish level and its soon time that they will be much more sensitive to the data as the rate front loading is almost done. The fed funds futures are pricing in a 48% chance of 150 bps more vs 76% last Thursday.

Now we can see that just maybe a Fed bond put emerged on Friday with the Timiraos article and followed by comments from Evans and Daly amid the sharp selloff in Treasuries. Evans said “Front loading was a good thing. But overshooting is costly too, and there is great uncertainty about how restrictive policy must actually become. So this is going to put a premium on the strategy of getting to a place and a level where policy can plan to rest and evaluate.” Daly said on the prospect of a “step down” from the pace of 75 bps rate hikes, “It should at least be something we’re considering at this point, but the data haven’t been cooperating.”

As for the markets response on Friday we were reminded again of how much Fed policy means to just about everything and just the prospect of the end of rate hikes is welcome relief. It certainly will be but it’s only part of this journey in that we’re going to have to live with a much higher cost of capital for a longer period of time thereafter.

Korean Government Bond Buying
Reflecting how hard it is for central bankers to extricate themselves from their extreme policies over the past 15 years, Reuters reported yesterday that “South Korea’s government will expand its corporate bond buying program among other liquidity supply measures amid growing worries about a credit crunch in bond and short term money markets. The government will double the ceiling of its corporate bond buying facility run by state-run banks to 16 trillion won ($11 billion), Minister of Economy and Finance Choo Kyung-ho said Sunday.” The Kospi did rally by 1%.

UK
With the likelihood that Rishi Sunak will be the next PM, the author of the corporate tax rate hike next year to 25% from 19%, that Liz Truss wanted to prevent, and also the windfall profits tax, gilt yields are rallying sharply as maybe the BoE won’t be as aggressive with hikes. The 2 yr gilt yield is down by 33 bps to 3.47%. The 10 yr yield is lower by 20 bps to 3.86%. Both are at one month lows. The pound is little changed after the rally last week.

Positively for Europe, the price of Dutch TTF natural gas fell below 100 euros per MWH at 98. It’s the lowest since June and for perspective, it was in the low 70s before the Russian invasion. 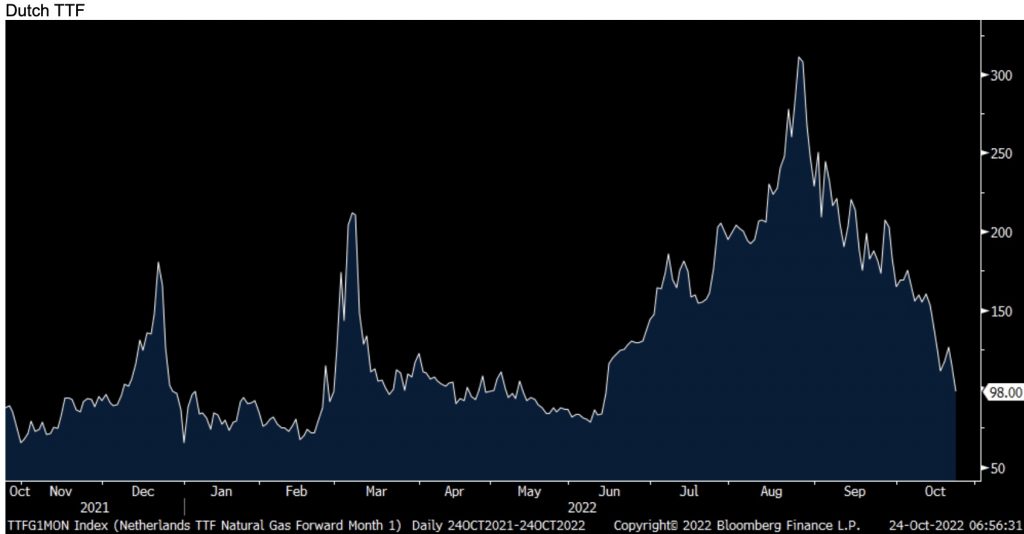 Chinese Yuan Getting Hammered
Not that it’s surprising but President Xi officially announced that he’s surrounding himself by ‘yes’ men and that security could be/will be the priority over economic growth and Chinese stocks got slammed in response, particularly H shares in Hong Kong by 7.3%. The offshore yuan is also getting hammered, down by 1% which is a huge move for this currency. The Chinese economy is going to have to grow in spite of Xi, not because of him. Speaking of which, China’s GDP (finally reported) grew by 3.9% y/o/y, above the estimate of up 3.3% as infrastructure spending (both helping IP and fixed asset) and trade offset weakness in consumer spending and property. We take the absolute level of GDP with a large grain of salt and instead focus on the trajectory of growth and that of course is a downshift.

Trouble In Japan Continues
We also saw some overseas PMI’s before the US one today. Japan’s composite index rose to 51.7 from 51 solely due to a rise in services. That service figure was helped by a pick up in tourism in response to the ever weakening yen and “The recent easing in international border restrictions and the launching of the Nationwide Travel Discount Program” according to S&P Global. In contrast, “The manufacturing sector continued to struggle in the face of weak demand conditions and severe cost pressures.”

Speaking of Japan, the moves in the yen are getting ever more wild as after rallying 1.7% on Friday because of the FX intervention, it’s selling off by 1.2% today as the Japanese government is getting reminded AGAIN that intervention is spitting in the wind unless the crux of the weakness is dealt with and the BoJ has no interest in that. 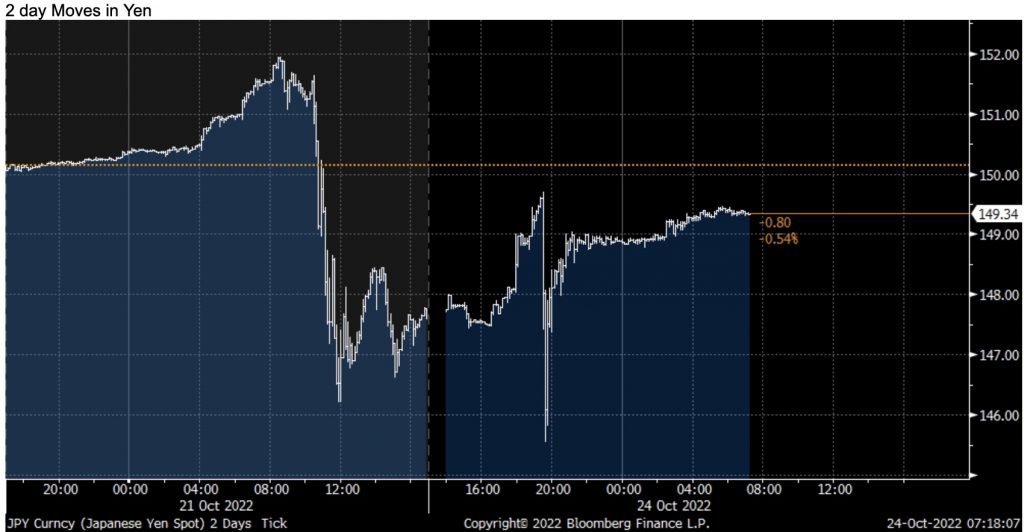 Australia
Australia’s October PMI fell under 50 at 49.6 from 50.9 in September with both components lower m/o/m. S&P Global said:

“A fall in demand for services was underpinned by higher interest rates and prices, altogether reflective of the detriments of aggressive monetary policy tightening and capacity constraints upon business activity.”

Eurozone
The October Eurozone PMI fell 1 pt to further below 50 at 47.1. The estimate was 47.6. Services dropped by .6 pts to 48.2 while manufacturing dropped by almost 2 pts to 46.6. So, there should be little doubt that the Eurozone economy is in a recession. S&P Global said:

“While the rising cost of living remains the predominant cause of the economic slowdown, the region’s energy crisis remains a major concern and a drag on activity, especially in energy intensive sectors. Price pressures meanwhile remain stubbornly elevated, as rising energy and staff costs, and the weakened euro, offset any lowering of commodity prices linked to improving supply conditions.”

The UK PMI declined to 47.2 from 49.1 and below the forecast of 48 with also both components below 50. We can certainly blame the political turmoil, among other things like the energy price crunch and expect a negative Q4 GDP print here too when it comes.

ALSO JUST RELEASED: Greyerz – The World Is Now On The Verge Of Another Lehman Moment CLICK HERE.

***To listen to James Turk discuss the world hurtling into a financial panic that will rival 2008 CLICK HERE OR ON THE IMAGE BELOW.

***To listen to Alasdair Macleod discuss the global collapse that will rival the Great Depression CLICK HERE OR ON THE IMAGE BELOW.