Sprott may have just pinpointed the next market where investors will make huge returns.

Uranium’s August Glow
September 13 (King World News) – Jacob White at Sprott Asset Management:  Uranium, both the physical spot price and uranium mining equities, had standout performance in August. Uranium’s strength provided a notable divergence from the weak performance of the broader markets. Equity, bond and the broader commodity markets posted negative performance for August, a month characterized by rising interest rates, persistently high inflation and thin market depth and trading liquidity. These macro factors were further amplified by Chair Jerome Powell’s comments at the Federal Reserve’s (the “Fed”) 2022 Economic Policy Symposium held in Jackson Hole, Wyoming. Powell stated that the Fed would continue to raise interest rates and hold them at a higher level until inflation was brought under control.

The U3O8 uranium spot price rose from $48.59 to $52.83 per pound in August, an 8.73% increase. In response, uranium equities climbed even higher, with the Northshore Global Uranium Mining Index (URNMX) gaining 12.03% for the month. The positive returns experienced by both physical uranium and uranium mining equities reflected the increased acceptance among global governments of nuclear power’s dual role in supporting the world’s energy transition away from dependence on fossil fuels and in ensuring higher energy security. Further, we believe the uranium market’s outperformance in August reflected its unique micro factors and highlights the low correlation and diversification benefit potential of uranium equities. 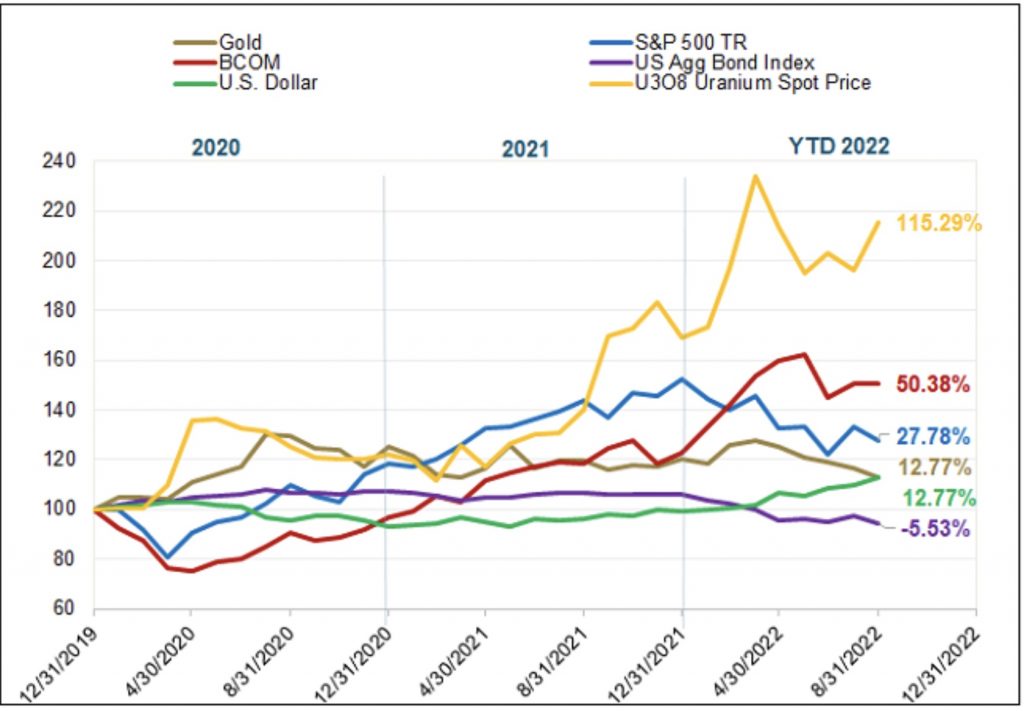 Global Sentiment Towards Nuclear Power Continues to Improve
Positive news headlines about the growing acceptance of nuclear power were abundant in August. Faced with the prospects of energy shortages and rocketing energy costs, many governments are turning to nuclear energy to provide reliable, affordable base load energy. The energy crisis that many countries are facing provides the “political will” to galvanize public support for nuclear energy.

Uranium equities had a strong positive reaction to Japanese Prime Minister Fumio Kishida’s announcement on August 24 that Japan wants to restart seven more nuclear reactors by summer 2023 and will explore the development and construction of innovative next-generation reactors as well as consider extending the life of existing nuclear reactors.3 Prime Minister Kishida further noted that “Nuclear power and renewables are essential to proceed with a green transformation” and that “Russia’s invasion changed the global energy situation”. Market participants had been patiently waiting for Japan to announce the restart of additional nuclear power plants to address its long-term energy needs.

South Korea was among the other countries that expressed greater commitment to nuclear energy in August. The South Korean government noted on August 30 that it planned to increase its percentage of total energy creation from nuclear to ~33% from a previous mid-term plan of 25%. In California, U.S., the nuclear power plant Diablo Canyon extension of life proposed by Governor Gavin Newsom has passed, representing a turnaround from the Governor’s previous stance to close the plant. In addition, the Inflation Reduction Act in the U.S passed in August and will give existing nuclear power plants $15/MWh generated conditional on shortfalls in their revenues from other sources. While this would not be triggered at current wholesale prices, it is likely to help keep the fleet online if prices were to revert to lower levels…

Uranium’s Bullish Outlook
August’s standout performance for physical uranium and uranium miners was a welcome exception in what has been a tough summer for most other asset classes. We believe, however, that the recent performance of uranium miners does not reflect the strong uranium market fundamentals. Year-to-date as of August 31, U3O8 conversion and enriched uranium prices have all significantly appreciated for both short- and long-term purchase contracts. Still, by contrast, the performance of uranium miners remains in the single digits. We believe that the current demand for uranium conversion and enrichment, coupled with a shift away from Russian suppliers supports an increase in the U3O8 uranium spot price, which is ultimately supportive for uranium miners.

This past summer saw numerous endorsements of nuclear energy from governments worldwide. In addition, other positive news continues to increase confidence, including the inclusion of nuclear energy in the EU taxonomy, Germany’s rethinking of planned plant closures, the U.S. Department of Energy’s announcement to buy $4.3 billion in enriched uranium from domestic producers and the G7’s statement on reducing reliance on nuclear goods from Russia. We believe these strong developments will likely bolster greater investment in nuclear energy, physical uranium and uranium miners.

Looking beyond the significant positive short-term performance, we believe the uranium bull market still has a long way to run. Over the long term, increased demand in the face of an uncertain uranium supply is likely to support a sustained bull market. For investors, uranium miners have historically exhibited low/moderate correlation to many major asset classes, providing portfolio diversification potential. 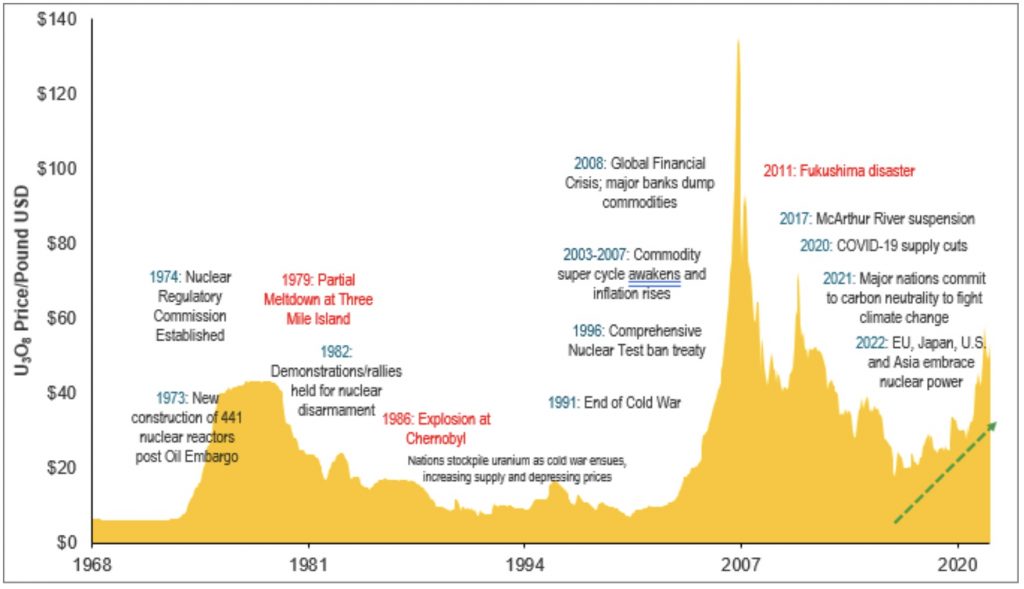 We continue to believe that physical uranium and uranium miners are well positioned to take share within the energy sector as energy security and decarbonization increase in importance. With the number of nuclear reactors planned to increase by 35%, governments are signaling the need to embrace the reliable, efficient, clean and safe energy produced by nuclear to meet ambitious decarbonization goals. At the same time, a uranium supply deficit remains entrenched and uranium miners may be the recipients of increased investment, which may in turn bring the market back into balance.

***To listen to James Turk discuss the chaos in Europe and the US as well as how silver and gold could vault to new highs quickly CLICK HERE OR ON THE IMAGE BELOW.

Silver Breaking Out As Gold And Silver Have Seen Their Bottom