Despite the countertrend rally in stocks, this is one hell of a crisis as turmoil in global markets will continue.

Some Kind Of Crisis
April 2 (King World News) – Jeff Snider at Alhambra Partners:  Following up on what I wrote earlier, there were no Lehman’s or anything like it during March 2020. Does that mean there hadn’t been a crisis? According to some, yes. If you were talking specifically about a bank crisis, then, of course, that would be true. There was no bank crisis last month.

It would be hard, however, to claim there wasn’t some kind of crisis. The stock market doesn’t just chop off 35% in a matter of days when everything is fine. Bond yields don’t collapse and oil prices crash. And all of these things at the very same time. An obvious global flush.

Lest we forget, too, the Fed was hard at work during this “it.” Starting with an emergency rate cut on March 3, quickly forgotten after “repo” bazookas, dollar swaps, QE4EVA, and a whole bunch of ’08 alphabeted abbreviations. None of those things seemed to calm markets.

But there was no Lehman!…

Something was obviously wrong, liquidations, fire sales, and a flight to liquidity all over the world. It was, in a word, disorderly.

That’s the whole point of a central bank, which is a huge problem because the monetary system doesn’t actually have one. A true central bank’s main job is currency elasticity; to stare confidently into a real crisis and stand ready to meet the needs of the entire system so that a crisis doesn’t get any worse than it needs to be; a catastrophe is unnecessary when central banks actually create elasticity.

Show the world the money. 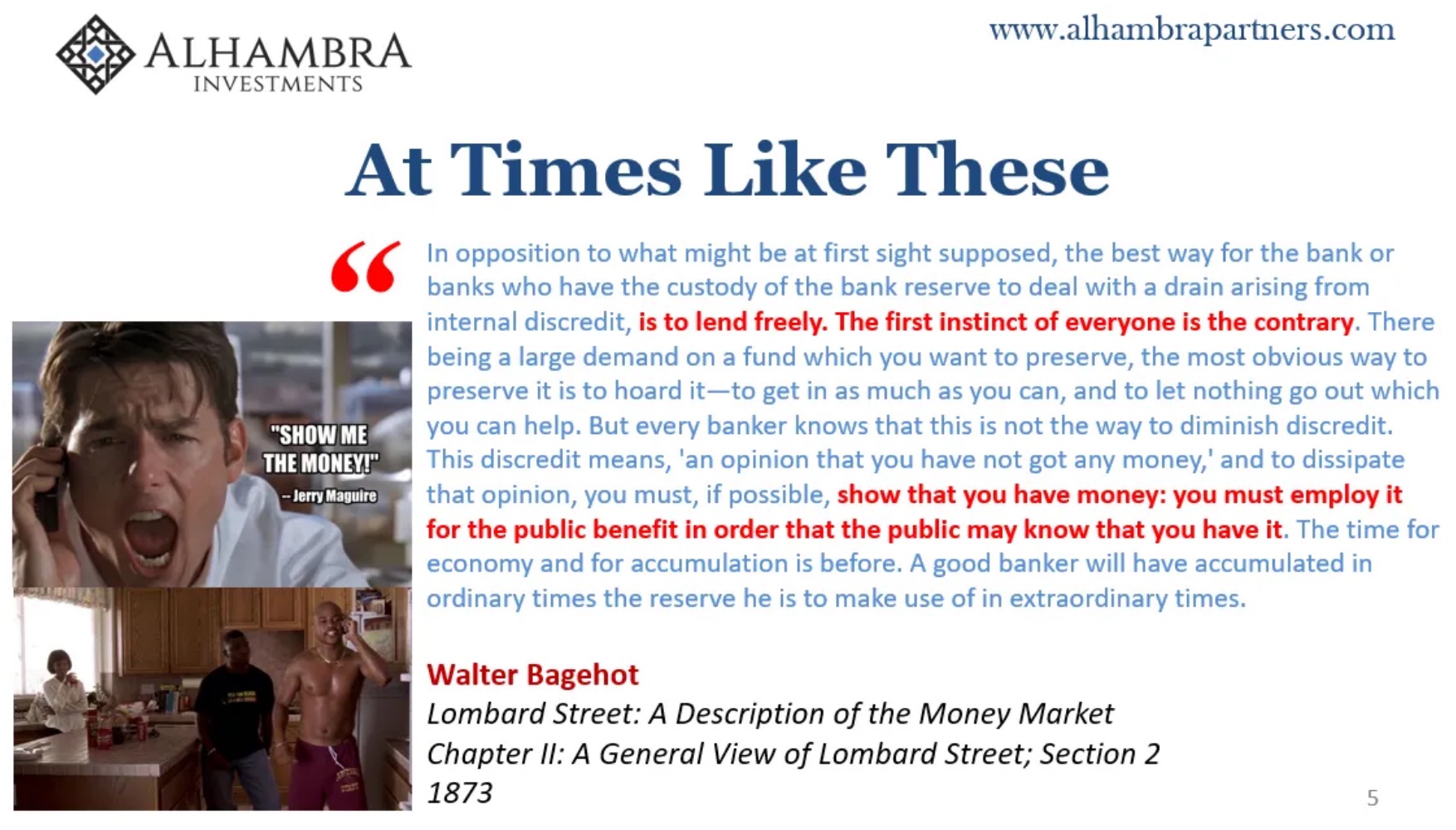 As I’ve been writing this week, we don’t actually have a central bank and Powell doesn’t have any money (just laundromat tokens). What we do see before us is a domestic bank authority which is, right now, congratulating itself for the lack of a banking crisis. How cute.

While technically that’s true, it’s also entirely irrelevant. There was and, this is the important part, still is a raging (euro)dollar crisis. I mean, you can actually see it: 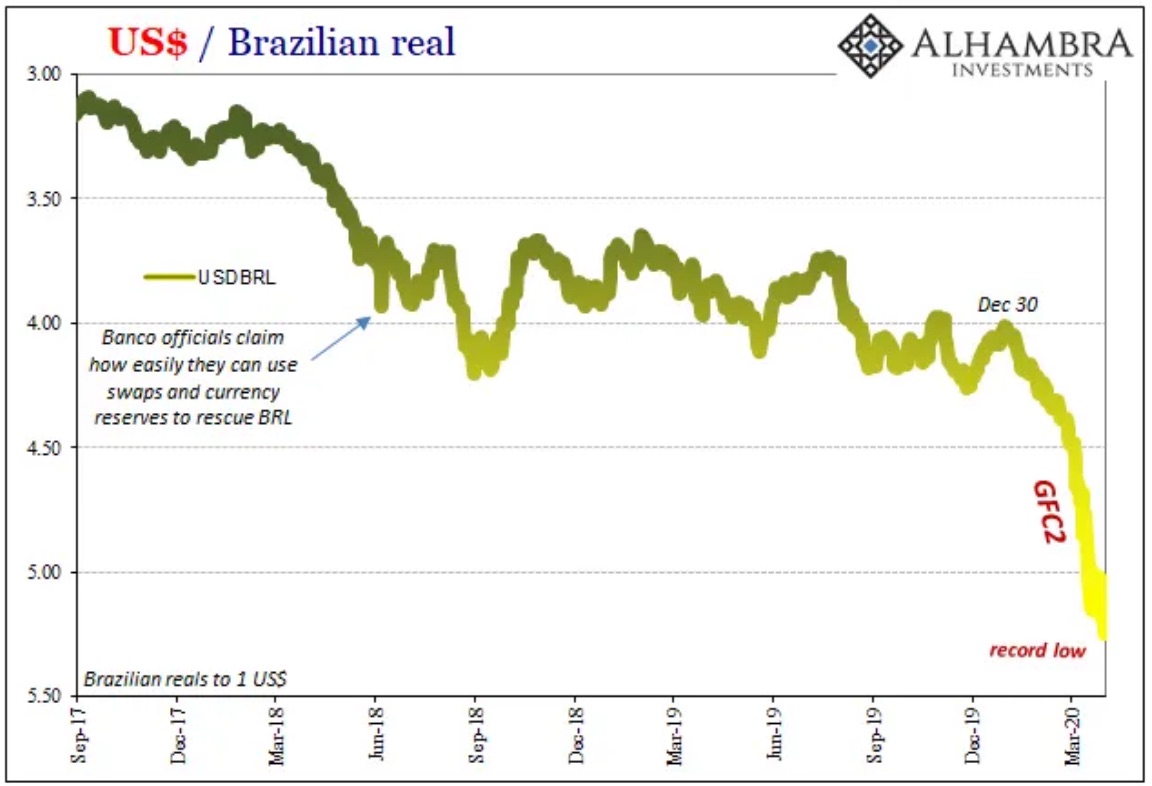 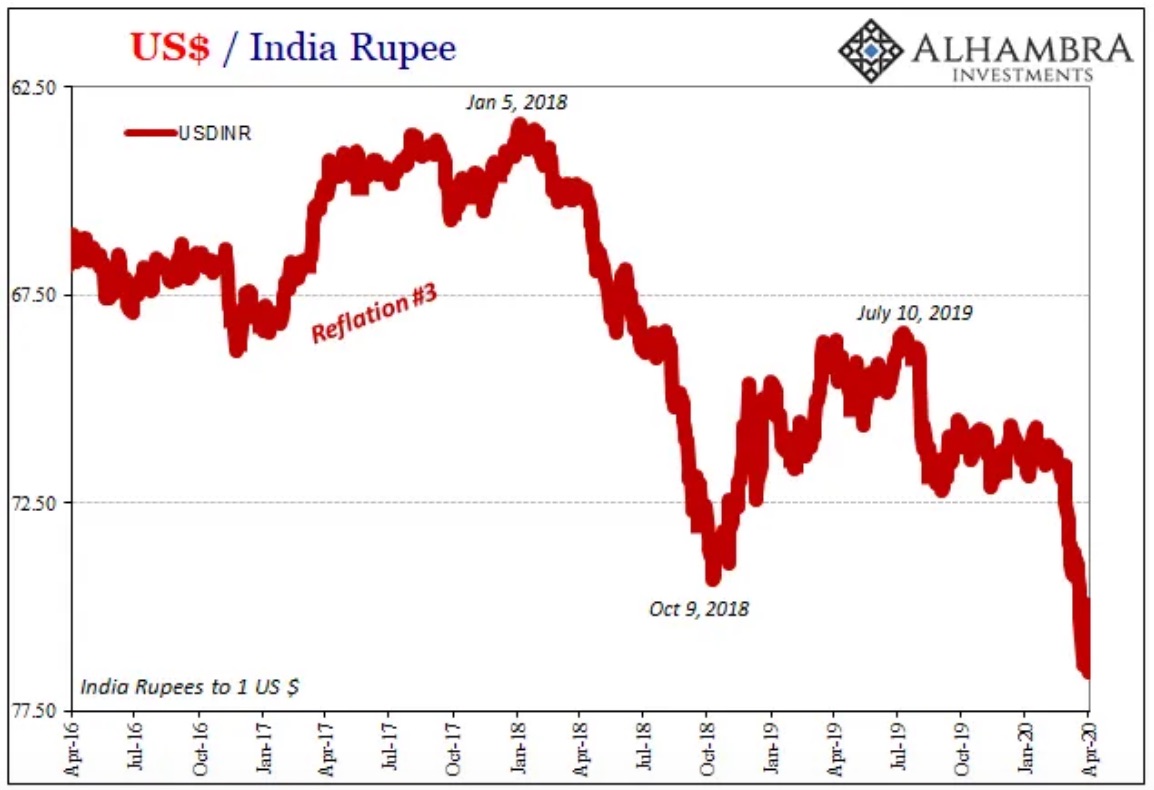 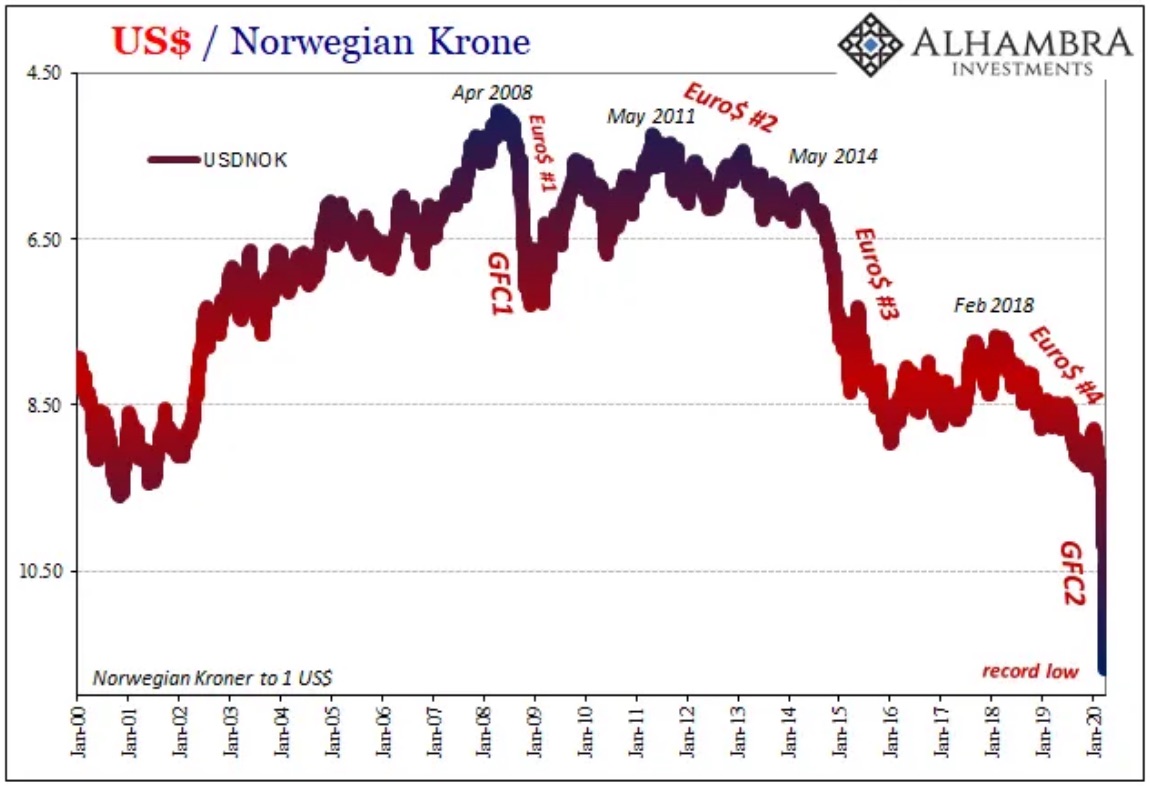 Mere coincidence, I suppose, this massive dollar wrecking ball which showed up at the very same time as all those things listed above; liquidations, fire sales, curve collapses, etc. 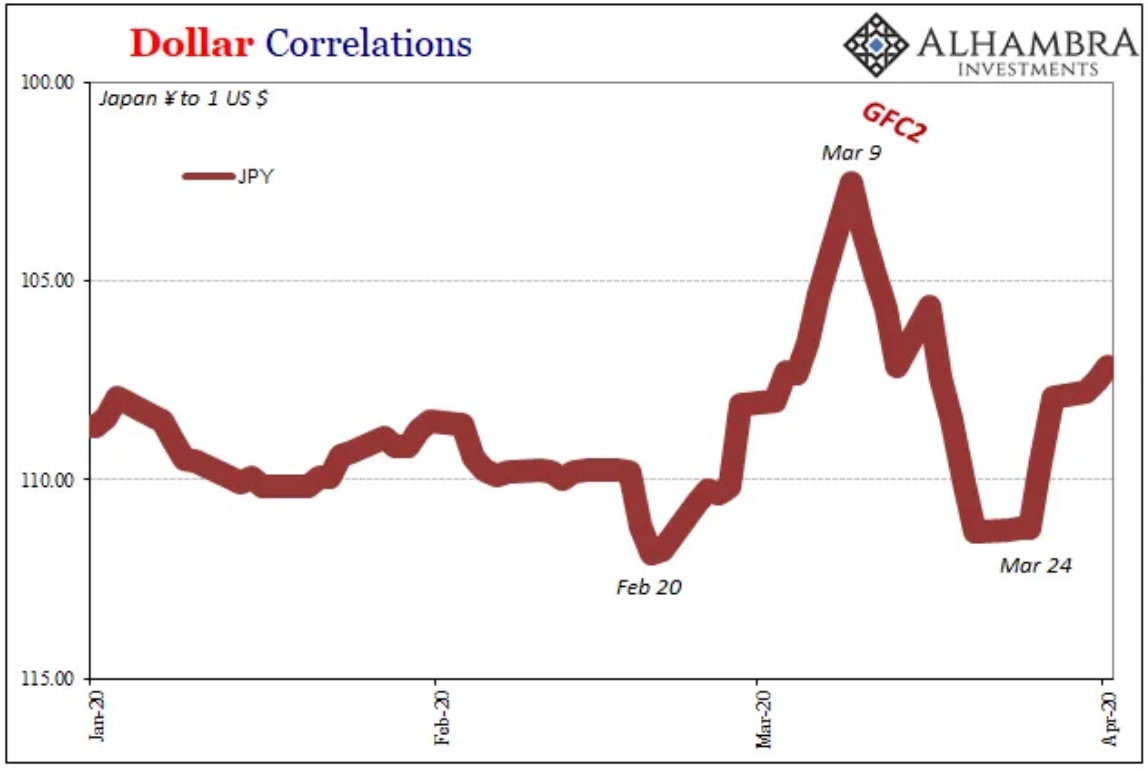 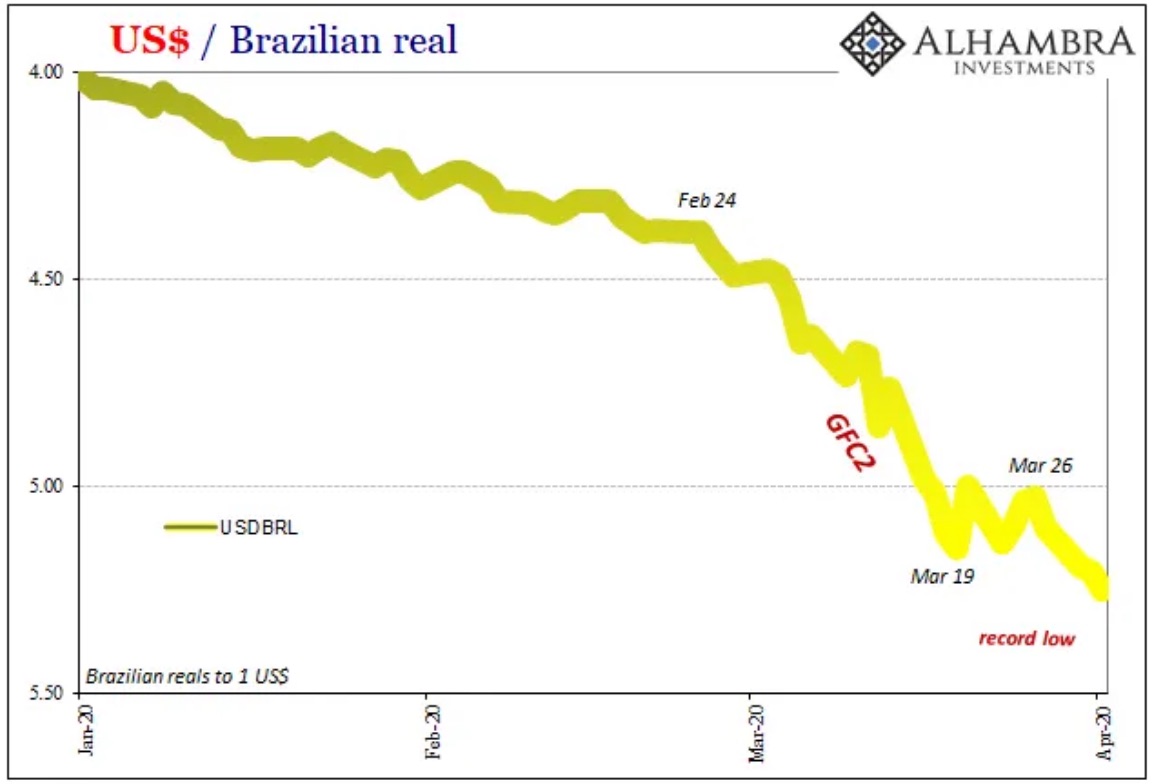 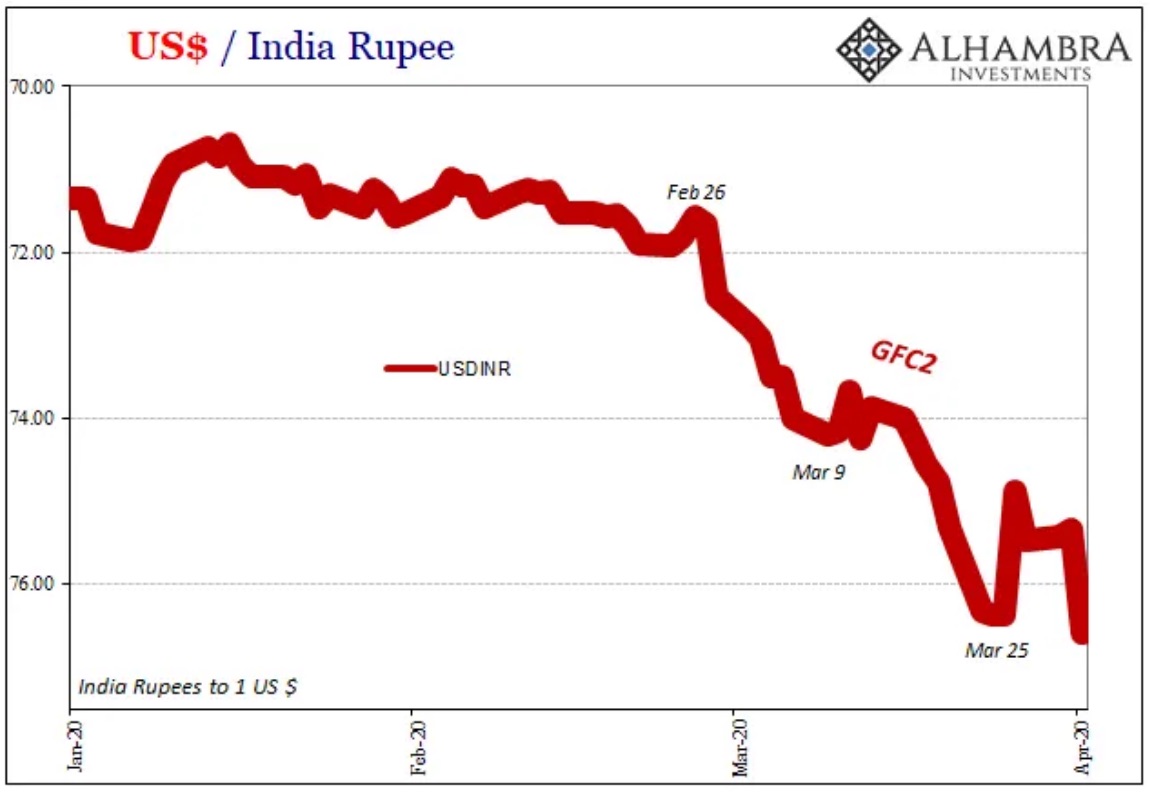 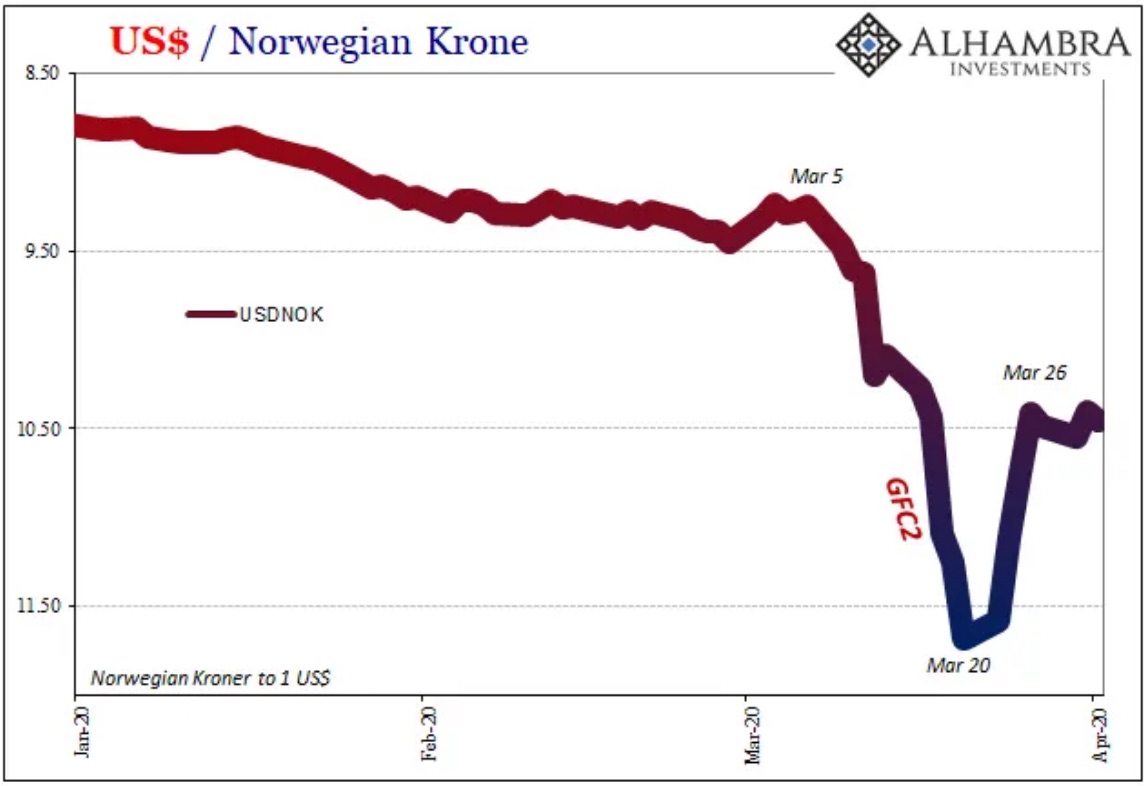 As you can see, too, there was only a small window of calm later in March. Jay Powell is busy taking credit for that, too, except it was more likely his brief good luck the mid-March calendar bottleneck had passed. Now that the calendar window has moved on, the last quarter ended, and here we are again with the dollar rising (and I don’t mean DXY).

Some places more than others. In all of these places, the central banks are active in currency markets (Norway faring the best, Brazil the worst, though India’s rupee did experience something like a flash crash today) “selling UST’s” which is the same as “supplying dollars” at the same time begging the IMF for some relief – and getting FIMA instead.

To belabor the point: dollar crisis. It’s so obvious. But congratulations, Jay, on the lack of a banking crisis. Kudos.

Fire the man. Immediately. While we still can.