As we come to the end of another wild week of trading, things are tough all over.

Things Are Tough All Over
September 2 (King World News) – Peter Boockvar:  We know what’s going in the housing market in terms of unaffordability and subsequent sharp slowdown in the pace of transactions but we can add another data point on the downturn it’s in. Redfin yesterday had a housing market update titled ‘Typical home now sells for less than asking price.’ They said “The average sales-to-list ratio fell below 100% for the first time since March 2021 and the share of homes with a price drop came down from its record high. With mortgage rates ticking back up, expect the post-Labor Day slowdown to be even more intense than usual.” This is for the 4 weeks thru August 28th. Again, housing all in makes up 15-18% of US GDP.

Auto sales out yesterday for August saw 13.18mm at a seasonally adjusted annual rate. That was just under the estimate of 13.3mm and down from 13.35mm in July and compares with 13.06mm in August 2021. Keep in mind that these are recession type figures as it averaged 16.9mm in 2019 but we know it’s a combination of limited supply at the same time the average price of almost $50,000 at the same time financing costs are higher makes a new car ever more unaffordable. According to Bankrate, the average interest rate for a 60 month auto loan is 5.19% vs 3.50% in January. Housing and auto’s of course are the two most interest sensitive parts of the US economy…

Bulls & Bears
I forgot to mention the stats around stock market sentiment yesterday. Capturing last Friday’s 3.4% drop, Investors Intelligence said Bulls fell to 38.4 from 45.1 and most of them went to the Correction side as Bears rose only .5 pt to 30.1. AAII, likely thru Tuesday of this week, said Bulls dropped 5.8 pts to 21.9 and that is the least since July 7th. At the June market bottom it got as low as 18.2. Bears recaptured the 50 level, up 8 pts to 50.4 and that is the most since that July date. It peaked at 58.3 in mid June. The CNN Fear/Greed index is at 44 vs 45 Wednesday and down from 55 one week ago. It has now slipped by a hair into the ‘Fear’ category from ‘Neutral.’ Again, as sentiment follows price, the likely end of the bear market rally off the June lows has sentiment more cautious again but not yet to the extent seen in June.

Energy Crisis
With NordStream1 likely back on line tomorrow after a few days of so called ‘maintenance’, the price of Dutch TTF natural gas is down by 15% today to a 3 week low bringing needed relief, however maybe temporary. Prices though are still dangerously high. 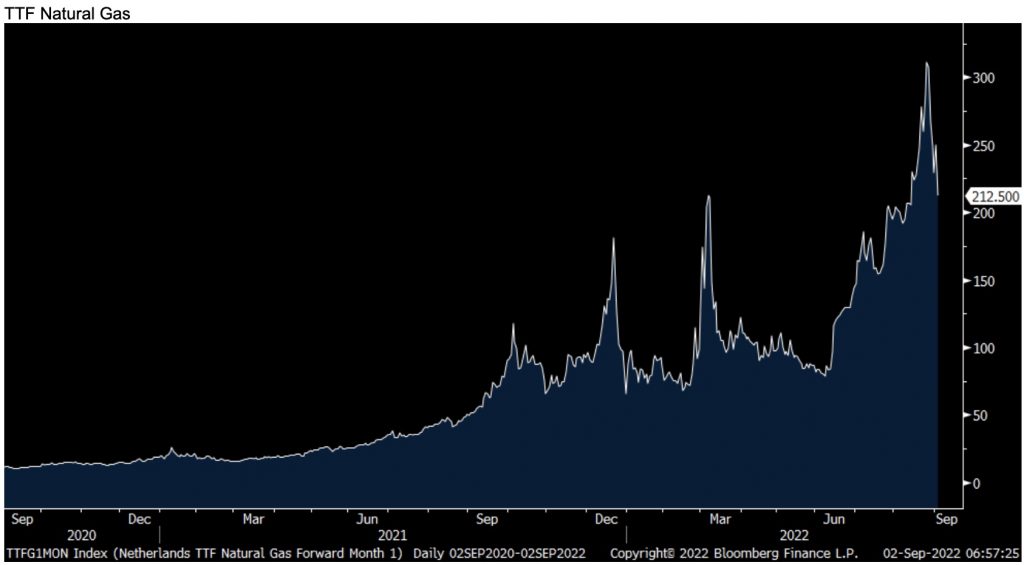 German power prices in turn are down for a 5th day this week and lower by 48% from last Friday after rising by 70% last week. 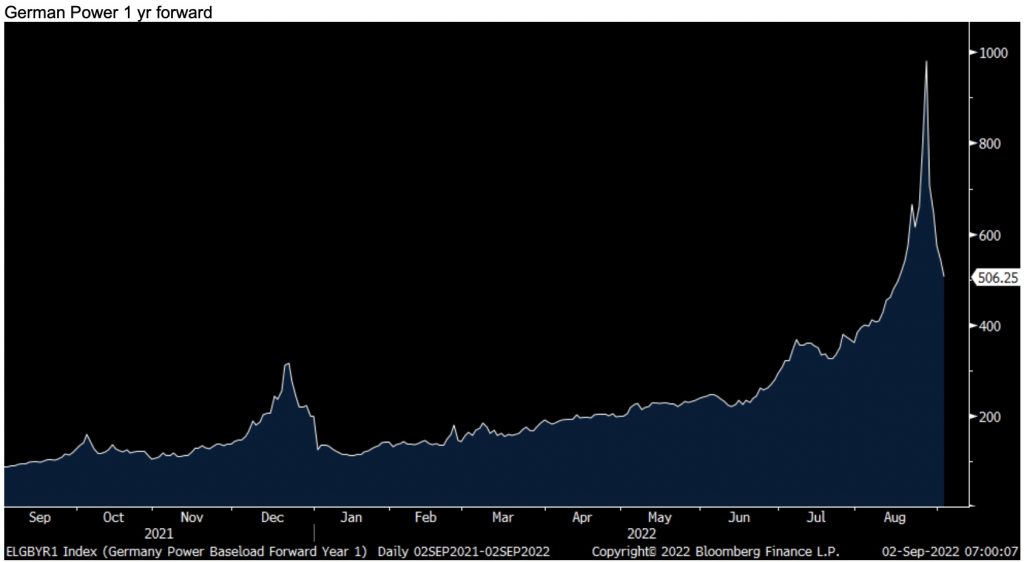 The euro is rising as a result but European bonds are softer again as it focuses on the growing likelihood of a 75 bps rate hike next week from the ECB.

Ahead of that ECB meeting next week, the Eurozone reported its July PPI and it rose 38% y/o/y, just above the estimate. 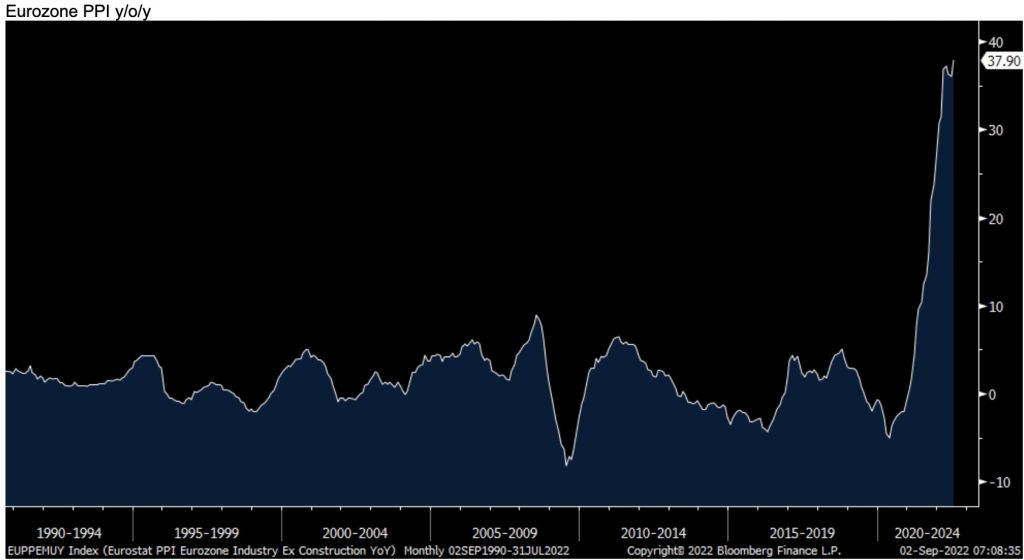 Ex energy, wholesale prices were still up by 15.1% y/o/y. The 5 yr 5 yr euro inflation swap is up by 4 bps today to 2.19% and that is the highest since late June but off its early May peak of almost 2.50%. Good luck Christine Lagarde.

During the Jackson Hole coffee talk, the head of the South Korean central bank said they will continue keeping on with rate hikes but they did see today a weaker than expected CPI print for August. It fell .1% m/o/m instead of rising by .3% as expected because of the fallback in energy prices and cuts in energy taxes. The y/o/y gain was 5.7% vs 6.3% in the month prior. The core rate though was about as expected, up 4.4% and compares with the Bank of Korea base rate of 2.50% and why they will keep on hiking. In response to the lighter print, South Korean yields are down a hair.