As we come to the end of the week, here is a look at gold, silver and the coming financial hurricane.

Gold & Silver
June 3 (King World News) – Alasdair Macleod:  After a minor sell-off earlier in the week, gold and silver rallied on Wednesday and Thursday. Trading was moderate despite being interrupted by holidays — Memorial Day in the US on Monday and the Queen’s Jubilee closing London yesterday and today (Friday). On the week, gold rose $17 from last Friday’s close to stand at $1866 in morning European trade today, and over the same timescale silver rose 28 cents to $22.38.

Financial markets have been consolidating their bear market losses. Bond yields have eased, equities rallied, bitcoin bounced, as have the euro, sterling, and the yen. But the underlying bearish trends may be returning. WTI oil is testing the $120 level and Jamie Dimon, head of JPMorgan doubled down on his warnings of banking conditions – more of which below.

European governments are giving in to Moscow’s demands for energy payments to be in roubles.

Bullion banks have taken the opportunity to straighten their books on Comex. Gold’s Open Interest on Comex reflects the degree of their success. 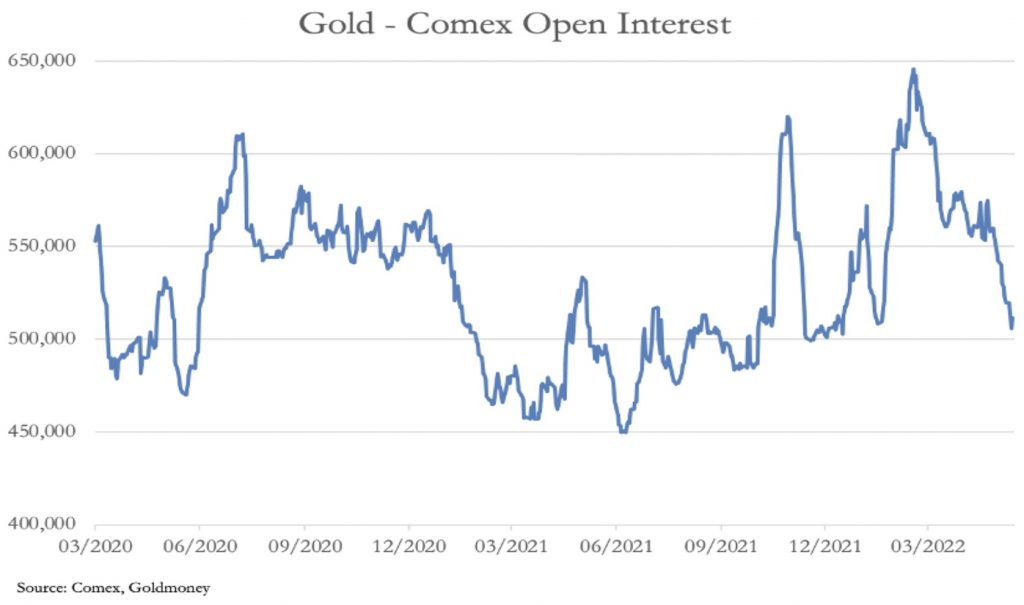 Having pushed Open Interest to a low of 505,854 contracts on 1 June, that appears to be as far as it can go. With a rising gold price and with the dollar’s trade weighted index now falling from its peak at 104.85 to a current 101.68, hedge funds are increasingly likely to buy into a new uptrend in Comex gold.

The overall banking environment is changing rapidly. Just two days ago Jamie Dimon of JPMorgan changed his description of the banking environment from stormy only nine days previously, to hurricane force. The signal is clear: JPMorgan will contract its balance sheet, and where it goes, so will all the other global systemically important banks — the G-SIBs. The banking cohort always acts as a crowd, alternatively driven by greed for profits and fear of losses. When fear takes over and banks protect themselves by withdrawing credit from the economy and markets, a financial and banking crisis always follows.

There has rarely been a clearer signal for financial markets.

So far as bullion bank trading desks are concerned, there will be cause for them to panic. Initially they may think — with some justification — that deteriorating bank credit conditions will lead to widespread selling of financial assets by hedge funds cutting all their long positions, including gold and silver futures contracts. But that must be put against investor concerns over holding liquidity in bank deposits as the systemic risks in the sector become foremost in their minds.

With an underlying lack of physical liquidity in gold and silver, the effects of a flight out of bank deposits could be dramatic. Furthermore, bank bosses will almost certainly bring pressure to bear on trading desks in all markets to cut their positions as soon as possible…to listen to Alasdair Macleod discuss the coming crack-up boom CLICK HERE OR ON THE IMAGE BELOW.