The world is hurtling toward another “Minsky moment” that will lead to full-blown panic.

US Dollar And Gold
September 8 (King World News) – James Turk:  The big story at the moment, Eric, is the US dollar. It has been riding high as troubles around the world continue to mount, but it is important to note the reasons behind this dollar move.

Given the near 10% US inflation rate, investors are not moving into the dollar to protect their wealth. Losing 10% of one’s purchasing power is too high a cost.

The dollar is in the stratosphere because of the global knee-jerk reaction to the growing energy crisis. The dollar only looks good because the other fiat currencies look so bad.

The dollar is at a 37-year high against the British pound. The euro has sunk to below parity to the dollar, which hasn’t happened since its wobble in its early days more than two decades ago shortly after this new currency experiment was launched.

Therefore, the strength in the US Dollar Index is misleading. This outcome is a result of its composition, of which 70% is just two European currencies: euro 58% and British pound 12%.

Another 14% is the Japanese yen, which probably has an even worse outlook. Japan has its own problems because of its heavy reliance on imported energy and also because of the Keynesian rut in which its central bank is stuck.

So discount the bullish appearance of this chart of the US Dollar Index. The dollar is not a safe alternative to protect one’s purchasing power, and when this uptrend in the index finally ends, the flight from the dollar will likely be swift and violent when measured against gold and silver – not other fiat currencies, all of which are becoming increasingly doubted. 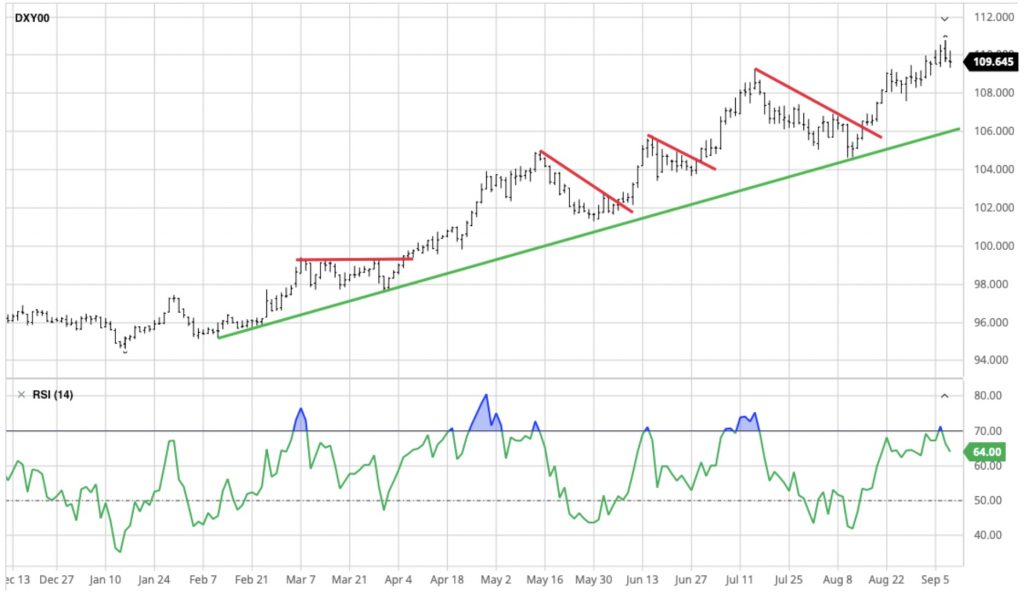 Aside from the dollar’s inflation problem, there is another reason to be worried about the dollar. At this moment in time, everyone needs to be familiar with the term “Minsky Moment”.

It is named after economist Hyman Minsky to mark the end of economic growth and rising stock prices that usher in a period of decline. Minsky observed this decline often leads to a banking crisis and financial panic.

In other words, Minsky Moments are marked by banking crises…

When the currency itself is not doubted, people rush into the currency. However, when there is little or diminishing confidence in the currency, investors look for alternatives to protect their wealth.

They typically move into tangible assets like the precious metals and land/buildings – depending on whether one is seeking liquidity or just protection of their purchasing power. Tangible assets do not have counterparty risk and will still exist after the crisis passes. For this reason even stocks can be a safe alternative, if chosen wisely. For example, owners of Mercedes stock still owned the company after the 1920’s collapse of the German reichsmark, which the company was able to successfully navigate.

It used to be that Minsky Moments were events contained in one or perhaps two countries at the same time. These days Minsky Moments occur at the same time worldwide as evidenced by the 2008 collapse because of the interlinking of the global economy, modern communications, and unified central bank adherence to fallacious Keynesian theories that created today’s currency problems. Therefore, given the mess created by central banks and increasing government intervention in economic activity, it looks to me that investors should batten down the hatches and prepare for the next Minsky Moment.

ALERT: You Heard It Here First – “QT” Will Be The New Buzzphrase That Moves World Markets