As we come to the end of what has been a wild summer, the world is hurtling toward a new global monetary system.

“It is well known that every boom must one day come to an end. The businessman’s situation, however, depends on knowing exactly when and where the break will first appear. No economic barometer can answer these questions. An economic barometer only furnishes data from which conclusions may be drawn. Since it is still possible for the central bank of issue to delay the start of the catastrophe with its discount policy, the situation depends chiefly on making judgments as to the conduct of these authorities. Obviously, all available data fail at this point. But once public opinion is completely dominated by the view that the crisis is imminent and businessmen act on this basis, then it is already too late to derive business profit from this knowledge. Or even merely to avoid losses. For then the panic breaks out. The crisis has come.”
— Ludwig von Mises

A new recession is inevitable. As already mentioned above, precise predictions regarding the when or how are not possible. At this juncture we nevertheless want to warn about an economic scenario that we believe to be a realistic possibility, namely stagflation. 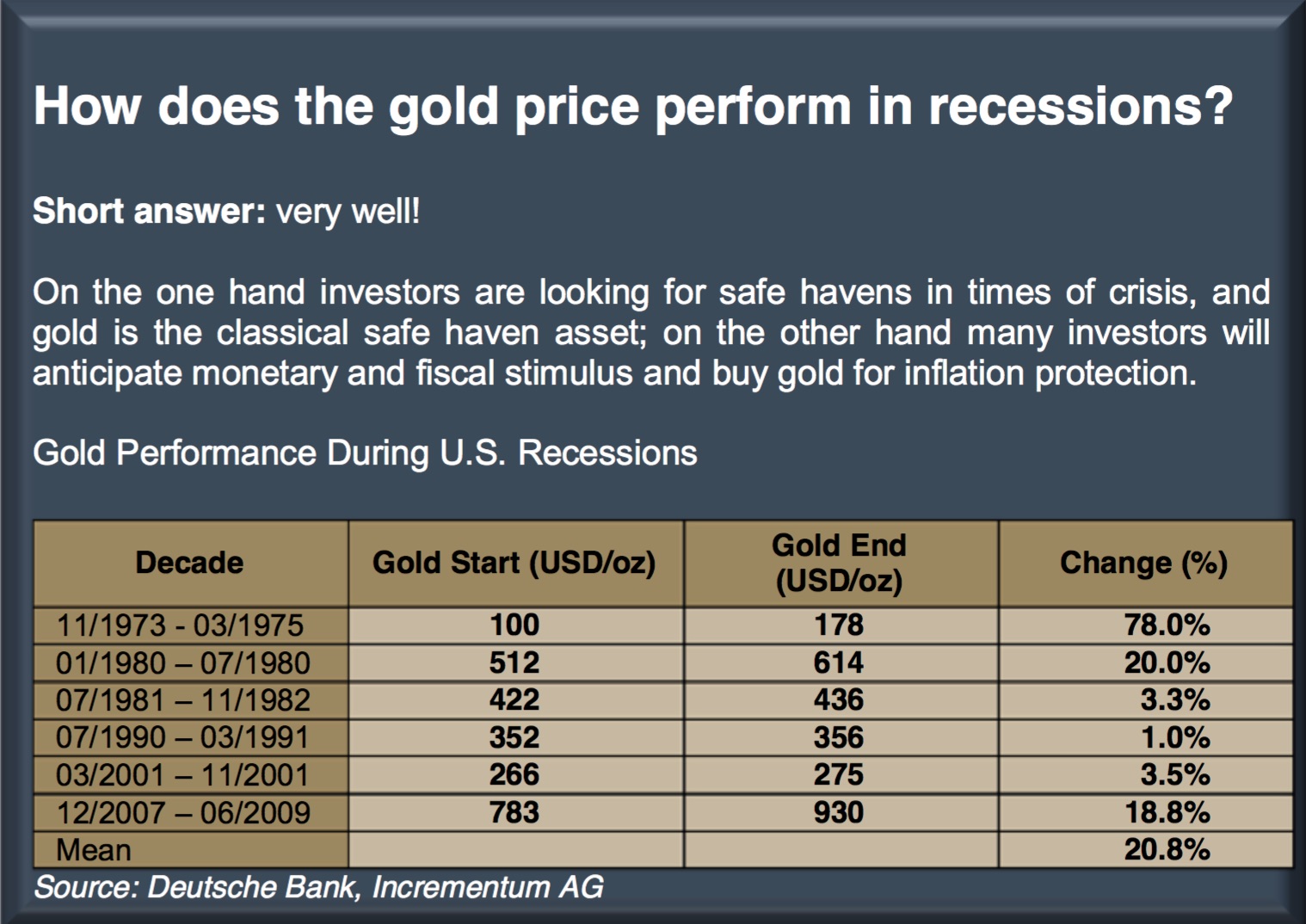 The term ”stagflation” is derived from the terms stagnation and inflation. It describes an economic situation in which economic stagnation (i.e., stagnating or even contracting economic output) occurs in combination with price inflation. According to the mainstream – i.e., Keynesian – doctrine, stagflation is practically an impossibility, as it is inter alia contradicting the Phillips curve. However, this is no reason for us to dismiss this scenario – quite the contrary.

Today’s framework conditions are of course different from those of the 1970s, when the Western world last faced a pronounced period of stagflation. However, from our perspective it is time to once again warn of considerable currency debasement and stagflationary tendencies arising in its wake. 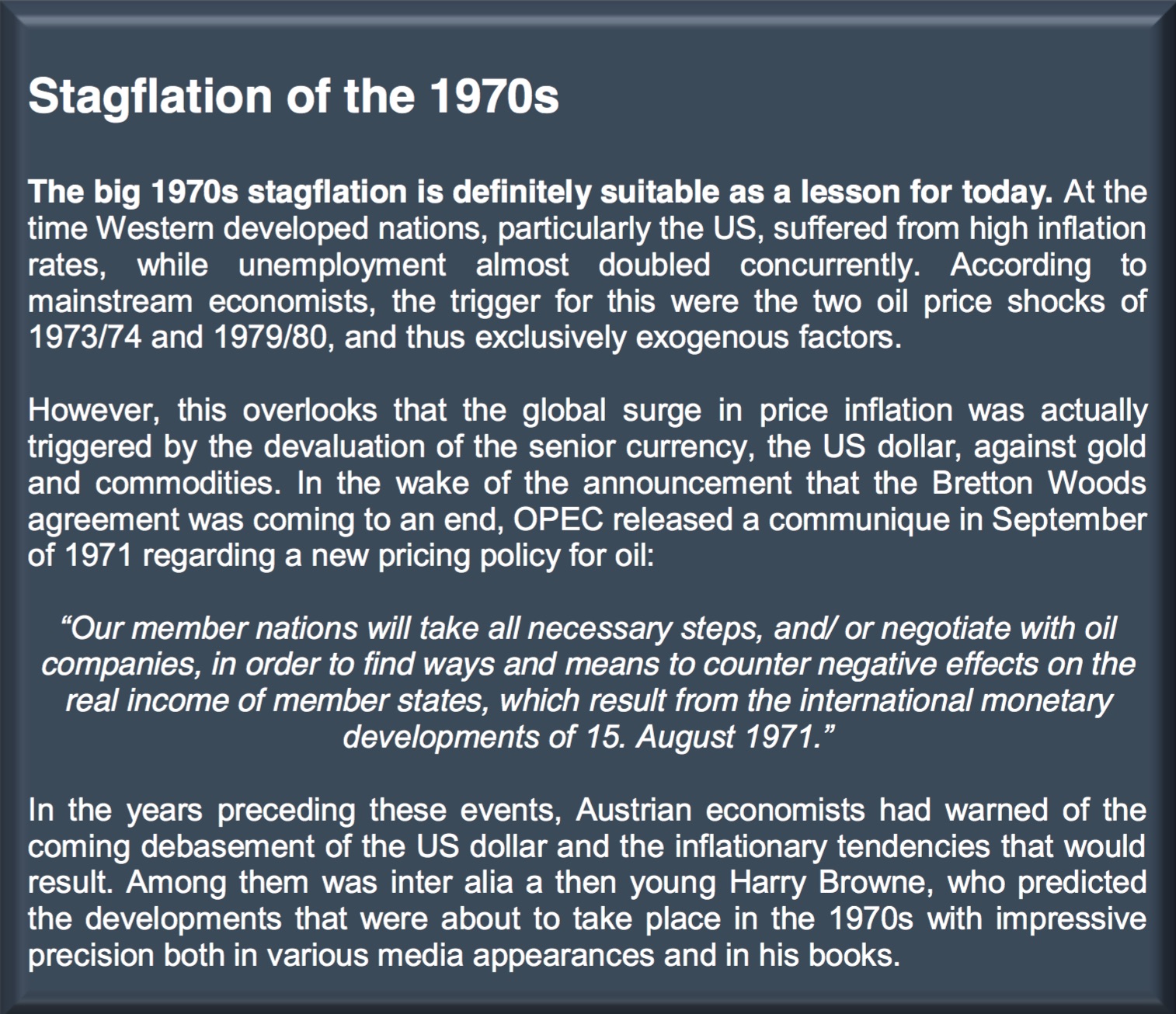 If reflation through higher credit expansion becomes more difficult, central bankers can do nothing but improvise (e.g. by testing the “academic thought experiment” of helicopter money in practice), which could lead to a loss of confidence in the paper currencies. This could – similarly as happened in the 1970s – manifest itself in a devaluation of paper currencies towards commodities.

Monetary Policy Is At The End Of The Line
Monetary policy is at the end of the line – no instrument from the toolbox of conventional and unconventional measures applied to date appears to be working anymore: Interest rates are at rock bottom and can only be lowered further if cash currency is banned; expanding central bank balance sheets further is becoming ever more dangerous as well – not to mention that it has never had the desired effect. Fiscal stimulus launched to counter the last recession has moreover raised government debt to such a dangerous level that it has become nigh impossible to revive the economy from this source.

This debt burden also makes a return to monetary policy normalcy extremely unlikely, as governments would likely be bankrupted left and right as a result. If a recession were to strike, it would strike with full force, as neither monetary policy nor fiscal policy could be used to mitigate it. Only inflation and economic growth could solve this dilemma, but neither of them can be pushed beyond a pedestrian pace. The Gordian knot needs to be cut – but how?…

Helicopter money could be the central bankers’ ace in the hole, as it would probably indeed boost inflation. Whether this inflation would evolve in an orderly manner or go off the charts in an uncontrollable burst, is difficult to predict. In either case helicopter money could well – whether this is the intention or not – ring in a new era of the monetary system, in which different crypto-currencies with “reputational backing” compete with each other.

It would also be the time for gold to shine. Should money indeed begin to drop from the skies, the reflation efforts of central banks would in all probability finally succeed and occasionally overshoot their targets – the kind of environment in which gold is traditionally doing well. Gold, which has been accorded great confidence for thousands of years, could furthermore play an important role in a possible monetary order based on reputation money.