The war in the silver market is heating up as the price of silver sees a major upside breakout.

First, there is a clear message from the big jump in volatility. Silver had a 9% trading range between its high and low price today, which is very unusual but also good news. Volatility like this normally accompanies bull markets, which is an observation also being confirmed by the second takeaway.

Silver finally broke above $26 and out of a sideways trading range. Overhead resistance at the $26 level had been containing silver for three months. So this breakout means the uptrend in silver that began in March is resuming with the result that we can expect a fundamental change in sentiment…

Previously, when silver approached $26 the prevailing thinking of traders was to sell because that level had been stopping advances in the silver price since August. Also, because of the prolonged trading range, a lot of traders over time had moved to the sidelines. But here’s the important change.

Enter The Momentum Traders
Those momentum traders who have been on the sidelines waiting for the breakout are again putting their money to work. It started last week and gained ground in Asia today as investors were gobbling up physical metal. So what had been overhead resistance at $26 now becomes support. Here is why that happens.

Anyone who missed out buying silver under $26 will now be in there trying to buy when it gets to or below $26. We saw two good examples of that today. Both times silver dipped below $26 money came off the sideline to buy quickly, pushing silver back above $26. There is always uncertainty as to whether a new uptrend is beginning, but these momentum traders and trend followers buy just in case the train is leaving the station and silver is on its way to higher prices.

One last point, Eric. There is a lot of talk about metal shortages. The problem is being misstated because there is metal around, but just not at current prices. It is in “strong hands” of people who understand value and are looking for higher prices.

The Real Problem
So the real problem is actually that there is too much fiat currency being created in an environment where precious metals are being actively capped by central planners. So to properly restate the problem, so-called metal shortages will disappear when gold and silver start trading at a fair valuation, which is a much higher price than at present.

Regardless, I continue to focus on silver, Eric. Both gold and silver are good value, but even though their ratio has dropped to about 72, it is still too high. So I expect the ratio to drop further. Meaning silver will outperform gold like it did today. Here’s a chart of March silver at today’s Comex close. 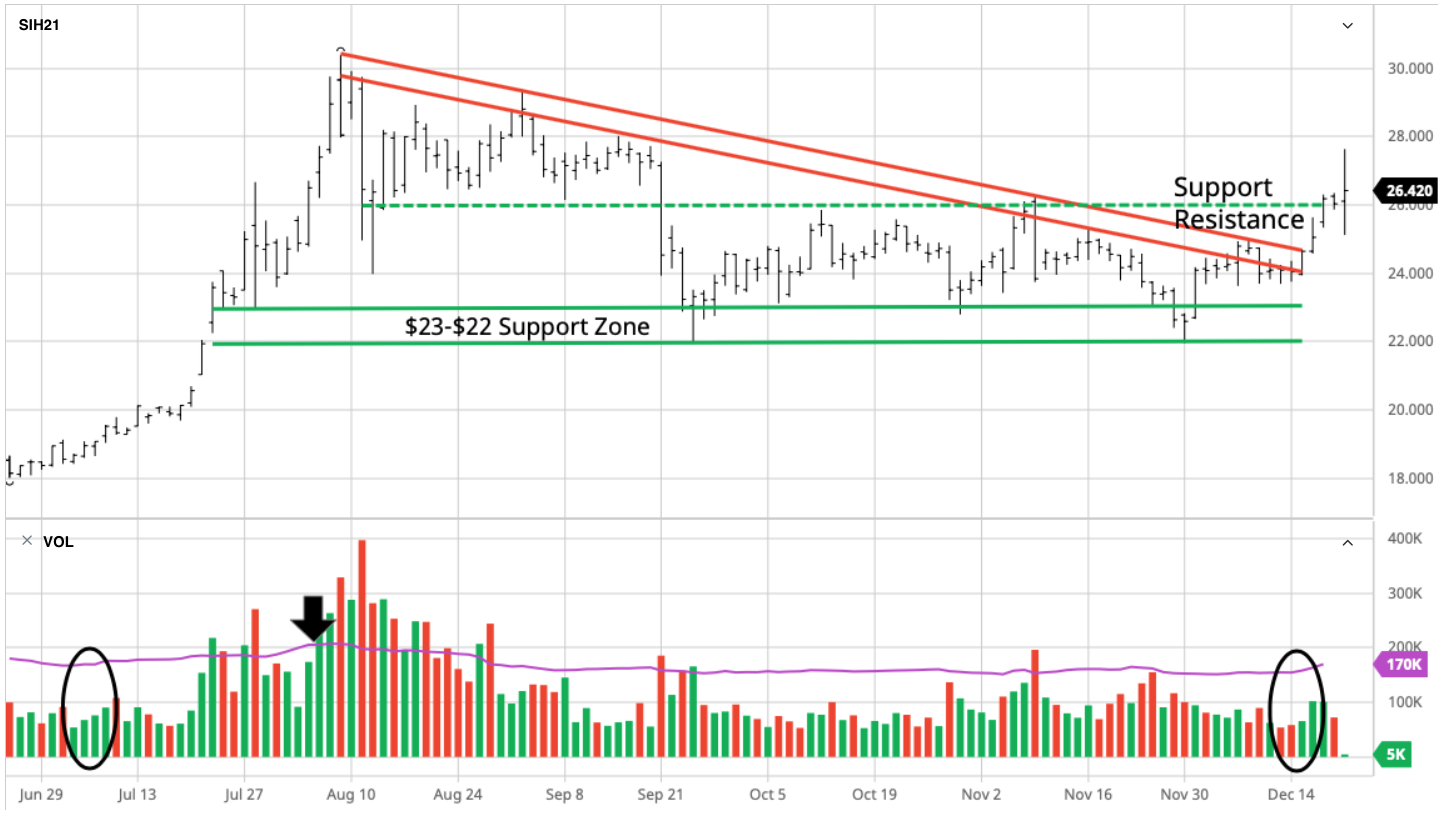 It was a wild day with a huge trading range, as you can see. But look at the circles I drew on volume and Open Interest.

$30 In Sight
So far OI is ticking higher like it did when the big move in silver was just getting started this summer. If this continues we will see volume surge and new buyers enter. OI will expand to over 200k contracts as the central planners go short by selling paper in a futile attempt to try stopping the rising price.

In other words, Eric, a very interesting battle is shaping up as yearend approaches and the summer’s high at $30 is in sight.

WORSE THAN 2008: The Financial World Is Facing The First Chapter Of A Global “Uh-Oh Moment”

The Trifecta For Gold Is In Place But Are Investors Prepared?