The liquidity drain is still ahead as bulls and bears battle.

Bulls & Bears
August 4 (King World News) – Peter Boockvar:  The emotion of market sentiment following price is obvious again. Yesterday Investors Intelligence said bulls rose to 41.1 from 38.9, and that is the most since January. It got as low as 26.5 in June. Bears fell to 30.1 from 33.3, the least since February and it got as high as 44.1 in June. Today, AAII said Bulls rose 2.9 pts to 30.6 and that is the most since June 2nd when it hit 32. Outside of that print, we have to go back to late March to see Bulls this high. Bears fell for the 4th week to 38.9, down by 1.2 pts and that is the lowest since that same day in June. The CNN Fear/Greed index yesterday closed at 46, which is in Neutral territory. That is up from 38 one week ago and 24 one month ago. Bottom line, none of these stats are extreme, not even close with AAII still seeing more bears than bulls but there has been a notable shift from the bearish side that was extreme in mid June. Thus, this rally is going to now need more than ‘sentiment is so bearish’ as a key factor for it to continue on.

Liquidity Drain Still Ahead
I do have to remind everyone that QT on September 1st ramps up to its max monthly level of $95b per month. The main focus on when the Fed is going to stop hiking rates has seem to have distracted some from the liquidity drain that is still ahead.

The Bank of England raised interest rates by 50 bps as anticipated to 1.75%. Go back 27 years the last time they hiked by 50 bps with an 8-1 vote on this. The one dissent wanted 25 bps. Because of the caps that are soon coming off electricity prices, the BoE expects inflation to reach 13% in Q4 from 9.4% in June. This at the same time growth is slowing and the BoE has to maneuver thru a bad case of stagflation. Here was a key line in their statement, “Firms generally report that they expect to increase their selling prices markedly, reflecting the sharp rises in their costs.” But, they expect “inflationary pressures…to dissipate over time. Global commodity prices are assumed to rise further, and tradable goods price inflation is expected to fall back, the first signs of which may already be evident.” As for what comes next, “The MPC will take the actions necessary to return inflation to the 2% target sustainably in the medium term, in line with its remit. Policy is not a pre-set path. The Committee will, as always, consider and decide the appropriate level of Bank Rate at each meeting.” In other words, they will play it by ear and are clearly not committing to another 50 bps hike at the next meeting.

The pound is selling off on that non-committal. The 2 yr yield though is little changed at 1.84% while the 10 yr yield is down by 7 bps to 1.86%, so their yield curve is now the most flat since 2019. The US 2s/10s spread inversion by the way is now up to 38 bps, wider for a 5th straight day. With the FTSE 100 heavy in banks and energy stocks, its P/E ratio on expected 2022 estimates is at only 10x with a 4% dividend yield. The FTSE 250, that has mostly domestically focused companies, has a P/E of 14.3x with a 2.9% dividend yield. I continue to like London based energy stocks, some banks and some reits. 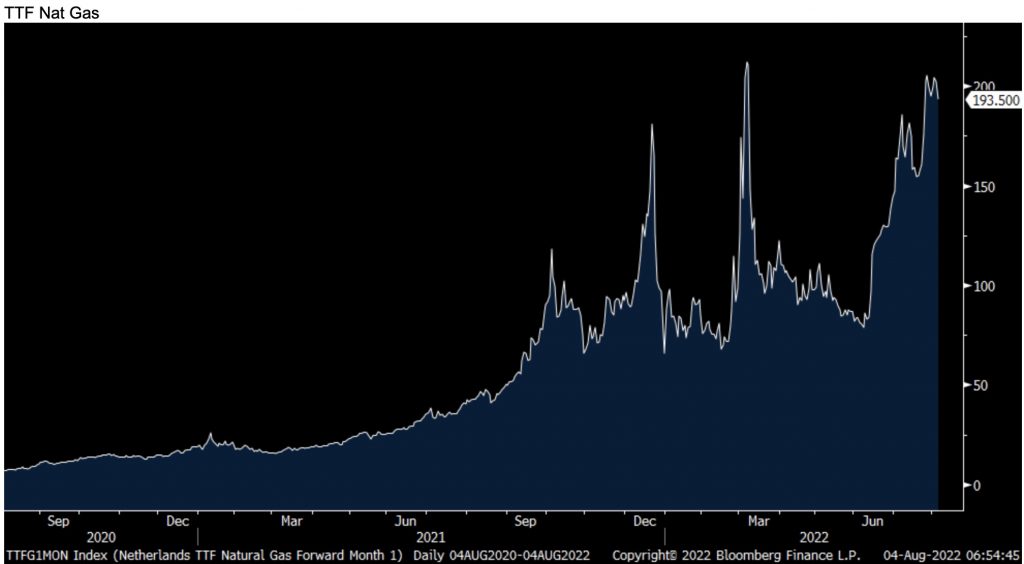 Germany factory orders in June were softer than expected and May was revised down. Their statistics office cited what is clear, “In view of the increased uncertainty caused by the war and an impending gas shortage, demand development remains weak. The outlook for industrial activity remains restrained as the business climate has cooled.” They didn’t mention but is implicit, China, their biggest export customer, is experiencing its own economic weakness. The 2s/10s spread in Germany is at the most narrow since December 2021 on the continued growth worries. The euro is up a bit as are German stocks.

The Brazilian central bank raised its Selic rate by 50 bps as expected to 13.75%. 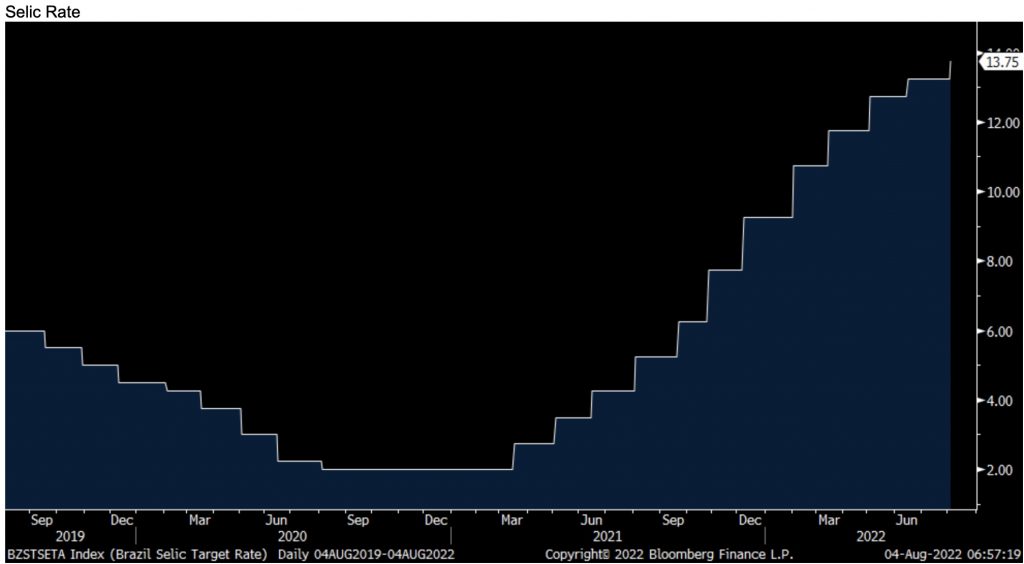 Talk about a rate hiking cycle as this was 2% in March 2021 and was at 4.5% going into 2020. With their long experience of bouts of high inflation, ‘transitory’ is not in the Brazilian vocabulary. They left open the possibility of another increase in September but at a slower pace, “The committee will evaluate the need for a residual adjustment, of lower magnitude, in its next meeting.”