With tremendous fear spreading to global markets around the world, today one of the top economists in the world sent King World News an incredibly powerful piece warning about the collapse of a deluded fantasy and the most devastating reality check of all.  Below is the fantastic piece from Michael Pento.

The economic plan known as Abenomics, which promised that massive money printing coupled with government spending would put the world’s third largest economy on a path to sustainable growth, seems to have hit another roadblock. This latest contraction marks the third such setback since the optimistic launch of Abenomics at the end of 2012. Japan appears to be headed towards a triple-dip recession. 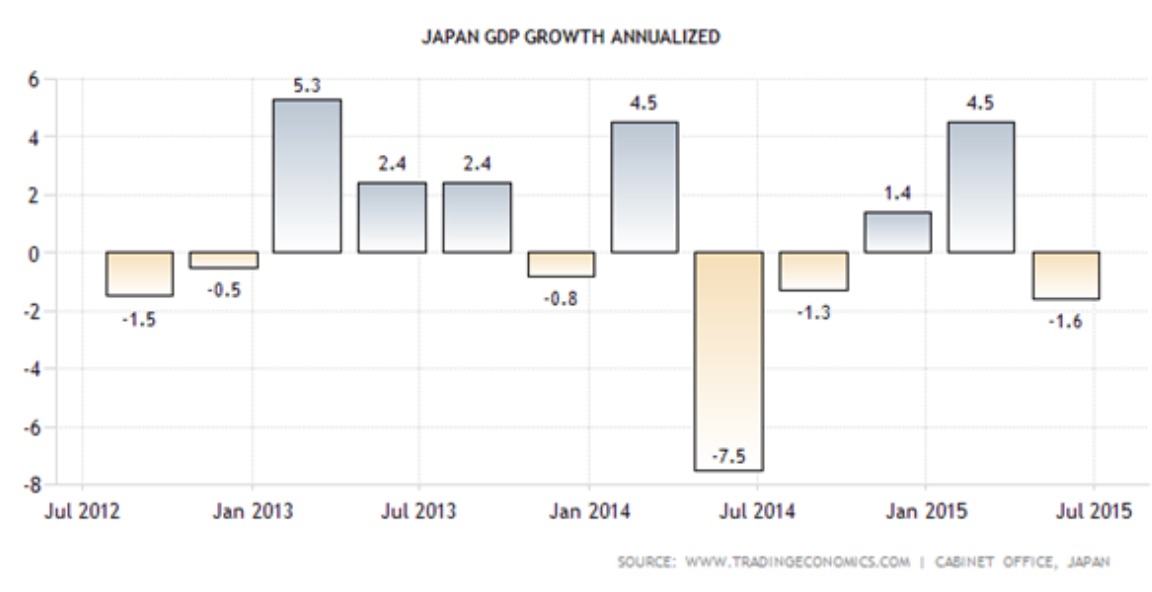 As Japan’s economy has been struggling, bond prices have soared and yields have crashed. But only because Japan’s central bank has been frantically buying JGB’s (Japanese government bonds) in a futile attempt to spur growth. While it is true Abenomics has been hard-pressed to reach its inflation targets, it is also a fact that the revenue needed to service Japan’s humongous and mounting debt mountain is quickly diminishing. Therefore, natural market forces should be pushing interest rates inexorably higher despite persistent deflation.

All this money printing has also given a nice bid to the stock market; the Nikkei 225 has increased 100% during the reign of Abenomics, defying the notion that high stock valuations should be the product of strengthening economic growth that leads to rising earnings.

The ECB’s (European Central Bank’s) foray into QE provides more proof of the impotence of central banks to generate viable and robust GDP growth. In July 2012, Mario Draghi promised to do “whatever it takes” to bring growth to the flailing European Union. To make sure his words don’t get lost in translation, in English this means print money and buy debt. After this promise, Europe saw another four quarters of contraction before growth emerged on the positive side. But that anemic growth rate has been stuck between the flat line and 1.6% ever since.

In fact, in the European Union’s latest Q2 data; Germany, France, and Italy all posted weaker-than-forecast numbers, while growth in France registered at a nice round 0.0%.

Despite Draghi’s $67 billion a month worth of “whatever it takes” money printing, eurozone GDP has barely moved off the flat line. Yet despite this, the German benchmark DAX is up 65% during the tenure of the ECB’s promise to keep bond yields in the zero-bound range. And Draghi’s quest to keep sovereign debt yields in a bubble has truly come to fruition — the German 10-Year] note yields just 0.6%.

And in our third case study of QE, let’s see how the US is faring after $3.7 trillion of new Fed credit. Since the end of the Great Recession the US economy has been limping along at around a 2% growth rate, despite perpetual optimism that QE will bring growth to escape velocity. To illustrate how dead the US manufacturing sector has become, just this week the New York Fed’s Empire State Index plummeted from 3.86 in July, to -14.92 in August, the lowest reading since April 2009.

The highly-accurate Atlanta Fed has third-quarter GDP tracking at an anemic 1.3%. Yet despite seven years of sub-par growth, stocks as measured by the S&P are up 160% from their lows and bond yields are near all-time lows as well. Growth has been slow and is getting worse…and now stock prices are getting a huge wakeup call.

Time has provided three clear and indisputable conclusions about QE: QE pumps stocks to levels that are completely disconnected from the underlying fundamentals of an economy. It allows bond prices to soar and yields to drop to levels the free market could never accept. And perhaps most importantly, QE does not lead to robust economic growth. This is because whatever unsustainable job growth there is comes from the building and servicing of asset bubbles, while it also encourages further unsustainable debt accumulations. The US oil fracking industry is a perfect example this.

Central bank cheerleaders hold to the counterfactual that growth may have been worse if governments didn’t implement QE. But QE prevents the economy from truly healing because it keeps asset bubbles and debt levels from contracting. What you end up with are massive capital imbalances, increasingly unsustainable debt loads, and financial asset inflation that sits on top of a crumbling economic foundation.

Collapse Of A Deluded Fantasy And The Most Devastating Reality Check

It is now becoming empirically obvious to any objective observer that the philosophy of money printing to generate growth is a complete failure. That bankrupt philosophy led to the biggest bubble of all: the QE-induced faith in central banks’ ability to save the world. The collapse of this deluded fantasy will be the most devastating reality check of all. ***KWN has now released the incredible audio interview with Egon von Greyerz, where he discusses the worldwide collapse, chaos in China, what investors can do to prepare and protect themselves, why gold and silver are headed to new all-time highs and much more, and you can listen to it by CLICKING HERE OR ON THE IMAGE BELOW.

John Embry – As We March Closer To Economic Armageddon, Something Is Terribly Wrong