Suppression Of Gold Coming To An End, Plus Looking Good So Far

It appears the suppression of the gold price is coming to an end, plus looking good so far.

Suppression Of Gold Coming To An End
October 28 (King World News) – Alasdair Macleod:  The systematic suppression of gold in favour of the dollar is now coming to an end. The fact that westerners hardly own any bullion as part of their savings is a mistake they will rue, if, as seems inevitable, current monetary and economic policies persist…

AS GOOD AS GOLD:
Day 36 Bottom Call For Gold Was Perfect 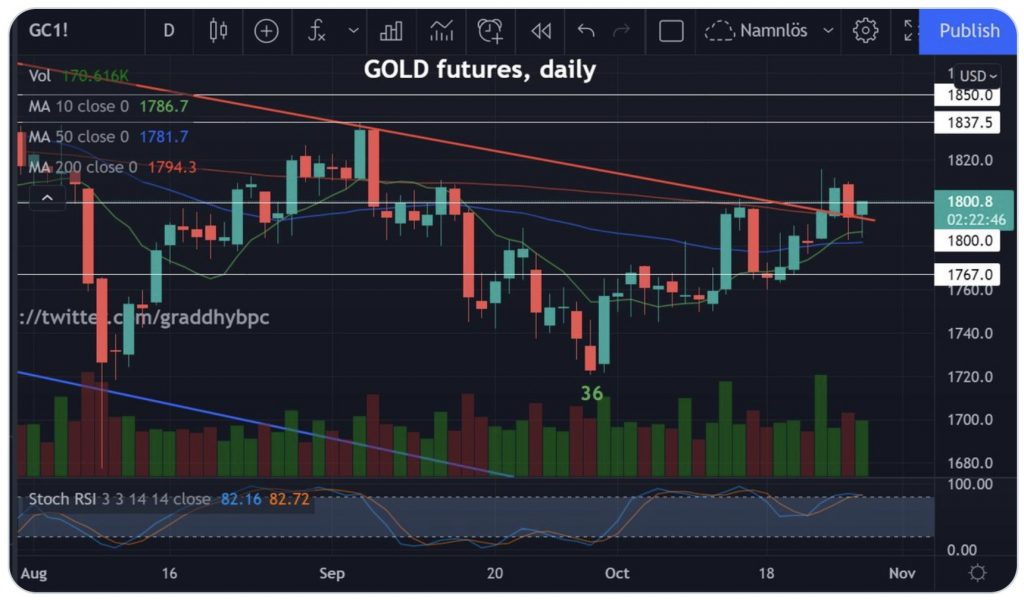 Want to read a line of pure bullshit?

Pay attention to what the Bankster Gang, the U.S. Federal Reserve has to say.

According to the Bureau of Labor Statistics’ the average American spends $8,000 a year on food… and with inflation rising, prices will go higher.

And, as reported by Breitbart on 9 October, the middle class now represents the smallest share—26.6 percent—of America’s financial wealth ever, since the Fed began calculating such figures.

The top one percent of America’s earners, however, have, for the first time, exceeded the middle class, and now account for 27 percent of the nation’s financial wealth; that one percent includes approximately 1.3 million households earning over a half-million dollars yearly.

So there’s now more wealth in the hands of that one percent than is held by the entire middle class.

Over the past 30 years or so, the middle class’s share of private and corporate business and real estate has been shrinking; at the same time, the top 20 percent of earners have increased their share by about 10 percent.