Today one of the greats in the business quoted Jesse Livermore’s famous “be right and sit tight,” warning gold may anticipate a historic Fed pivot.

The Dollar, Safe Haven or Leaky Lifeboat?
October 10 (King World News) – John Hathaway, Senior Portfolio Manager at Sprott Asset Management:  The “strong U.S. dollar” has been, of late, the most topical affliction for gold. Already sagging under the weight of hawkish Fed speak, receding financial liquidity, competition from crypto and disappointment from its failure to rise to new highs on the back of high inflation. The investment consensus appears to be one of highly convicted bearishness. Technical charts bear this out, with the metal breaking to a three-year low. The U.S. dollar lifeboat is no longer safe for occupancy.

The parabolic ascent of the U.S. dollar (USD) against all currencies and commodities, however, contains the seeds of its own demise. It is akin to the panicky overcrowding of a leaky lifeboat. The facade of USD strength foretells a comeuppance for all paper currencies: A steep devaluation relative to gold. As noted by economist Mohamed El-Erian, the “relentless appreciation of the dollar is terrible news for the global economy.” (Fortune, 9/26/2022). It is the latest and maybe final refuge of safety certain to disappoint clingers on as much as the late lamented “ultrasafe” refuge, U.S. government debt securities which are down 12.47% year-to-date through October 3, 2022.

What comes next? Could it be the rediscovery of gold, the one and only safe haven still relatively unscathed?

The kiss of death for the strong USD may well have been delivered by the Bloomberg Businessweek cover below. Overcrowded consensus trades are often top-ticked by magazine covers, a long-standing media tradition in keeping with Business Week’s “Death of Equities” cover in 1979. 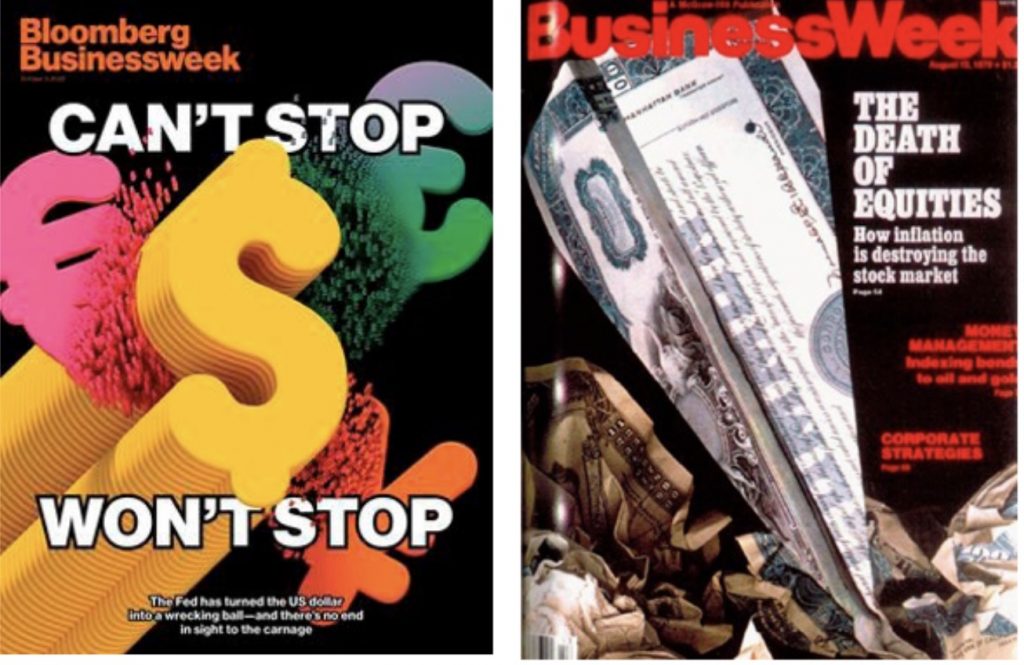 Extreme Dollar Strength May Lead to Instability
Dollar “strength” is a mirage. It is the reverse image of all other paper currencies’ weaknesses. In our view, the dollar “wrecking ball” may well represent the last stand for paper currencies in general, all of which are the ever-increasing issuance of fiscal decay.

Should the Federal Reserve (the “Fed”) stick to its Kamikaze inflation-fighting mission, the interest rate on U.S. debt will accelerate from its current monthly upward creep of 8.7 basis points (Figure 1). When annualized, that rate of gain translates to a nearly $300 billion addition to the fiscal deficit. The latest 12-month interest bill of $716 billion is based on a minuscule average annual interest rate of 1.971%. The average maturity on the debt is 6.7 years. Factors that would accelerate this monthly creep to a gallop would be the continuation of Fed hawkishness plus sales by foreign holders of U.S. Treasuries to defend their national currencies. 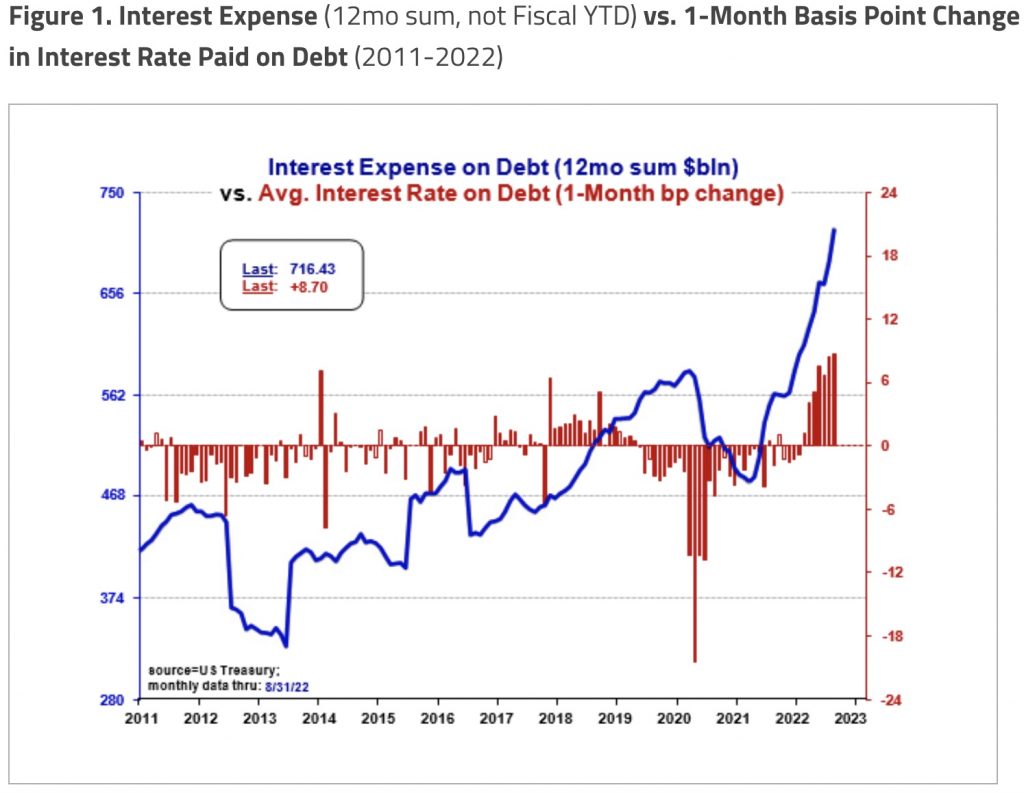 The days of the Fed purchasing 60-80% of annual government borrowing needs through balance sheet expansion have been decreed over. Quantitative tightening will add to supply already swollen by trillion+ dollar deficits. In addition, the Fed monetary MENSAs did not consider that foreign Central Banks would resort to selling their holdings of U.S. Treasuries to support their sinking currencies. To support the yen’s decline, the Central Bank of Japan sold $21 billion of U.S. Treasuries, resulting in a 3% one-day decline (September 26, 2022) in long-dated U.S. Treasuries. If you add foreign holdings of $7.5 trillion in U.S. Treasuries to the normalization (via quantitative tightening) of the $8.8 trillion Fed balance sheet, this tallies $16.3 trillion. What slice of that supply overhang leaks into the market as governments rush to defend their own currencies battered by U.S. dollar strength remains to be seen.

As Luke Gromen (Forest For the Trees, 9/30/2022) noted, rising interest rates against a backdrop of falling inflation would likely be based on an unfavorable market assessment of U.S. sovereign credit risk. How far will price discovery be allowed to operate in the face of a potentially massive mismatch between supply and demand? We reckon that market price discovery is on a very short leash, irrespective of the chorus of Fed Speak promising restrictive liquidity as far as the eye can see…

“The spillover effect of the Fed’s interest rate hikes has triggered many deep-rooted problems in the global economic and financial system…The dominant global status of the dollar means many central banks are forced to raise interest rates following the Fed, even if economic activities in those countries are under pressure or their domestic inflation remains soft.” – Sheng Songcheng, former director of the People’s Bank of China’s statistics and analysis department. (Bloomberg, 9/28/2022).

Multiple warnings of Treasury market dysfunction are surfacing. According to Ralph Axel, Bank of America rates strategist (as quoted in Grant’s, 9/16/2022):

“Declining liquidity of the Treasury market arguably poses one of the greatest threats to global financial stability today, potentially worse than the housing bubble of 2004-2007.”

In our view, U.S. Treasury market fragility combined with a potentially historic mismatch between supply and demand is the perfect recipe for stifling price discovery. As noted by the Wall Street Journal (The First Central Bank Casualty, 9/29/2022), citing the Bank of England’s rapid response to the rapid depreciation of the pound, “central bankers are easily spooked into rescue mode”. The MOVE index (Figure 2), broadly reflects bond market stress, with recent readings the highest since the 2008 Global Financial Crisis. 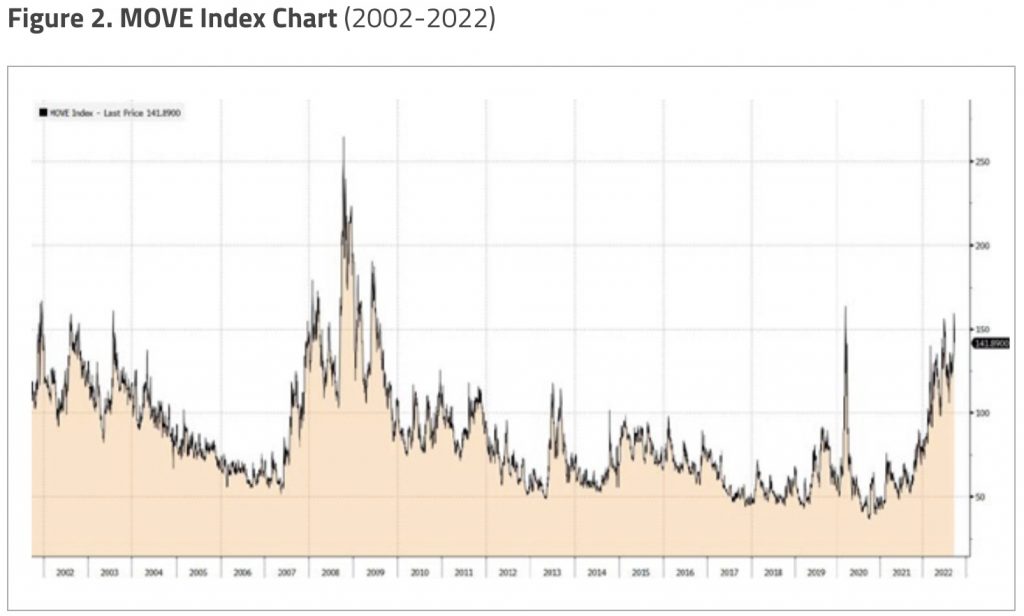 While the Fed may have been resolved at one time to look askance at the damage to the U.S. equity and bond markets when it embarked on its anti-inflation crusade, we believe that it was ignorant, even clueless, as to the economic repercussions of rising interest rates and draining liquidity. We have long believed that the consequences of applying a tight money regimen are different this time. The difference between the days of Paul Volcker and today is the much greater level of leverage in the U.S. and the world economy. The financial system of 2022 was built on submarket interest rates. What was painful medicine in 1980 is poison to the financial system of 2022. 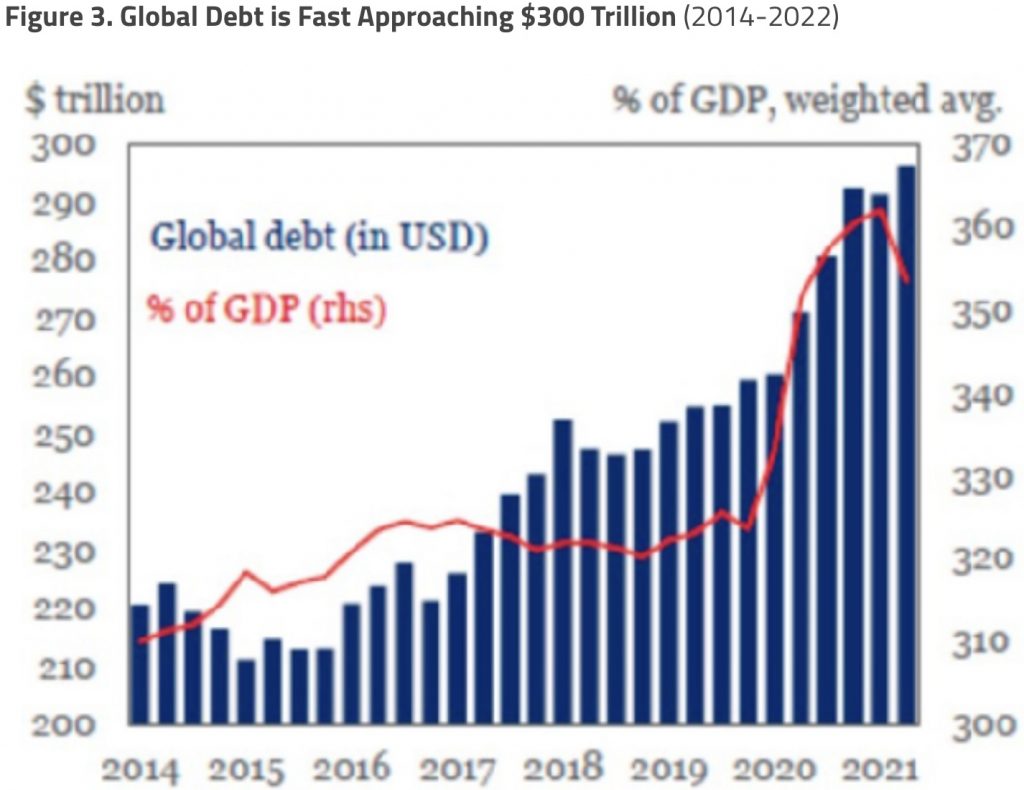 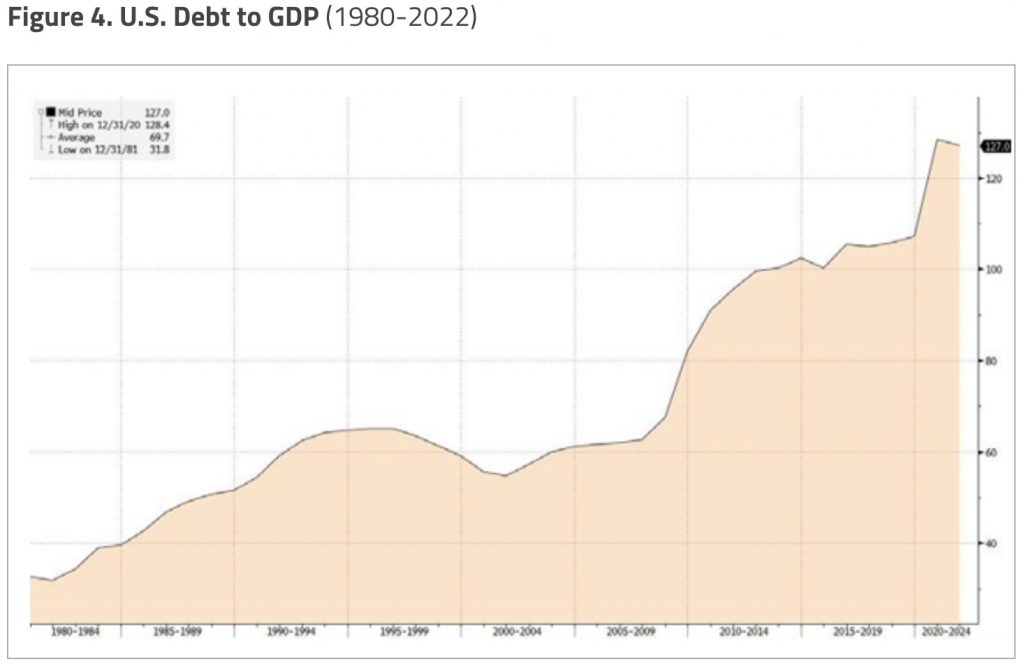 Hard Landing?
We believe the effects of collapsing leverage are only beginning to surface. The Fed’s laser focus on unemployment and CPI (consumer price index) inflation as the sole metrics to guide policy is in our opinion misplaced. Both are lagging indicators. By the time they are flashing green for the Fed to relent, long-lasting damage will have been inflicted. Waiting for unemployment to rise or the CPI to print 2% could take well into 2023. By then, the current recession that is underway will have steepened into an “L” shape, meaning an economic recovery delayed for years.

Collateral damage includes more than the still overvalued equity market. Don’t take it from us. As noted by Stanley Druckenmiller in a 9/28/2022 CNBC interview, the Fed engineered the:

“Wildest raging asset bubble I’ve ever seen… We’ve had 30 trillion QE [quantitative easing] globally over the last ten years. When you have free money and you have bond buying for that period of time, it creates bad behavior….That 30 trillion has created all sorts of stuff that’s probably under the hood.” 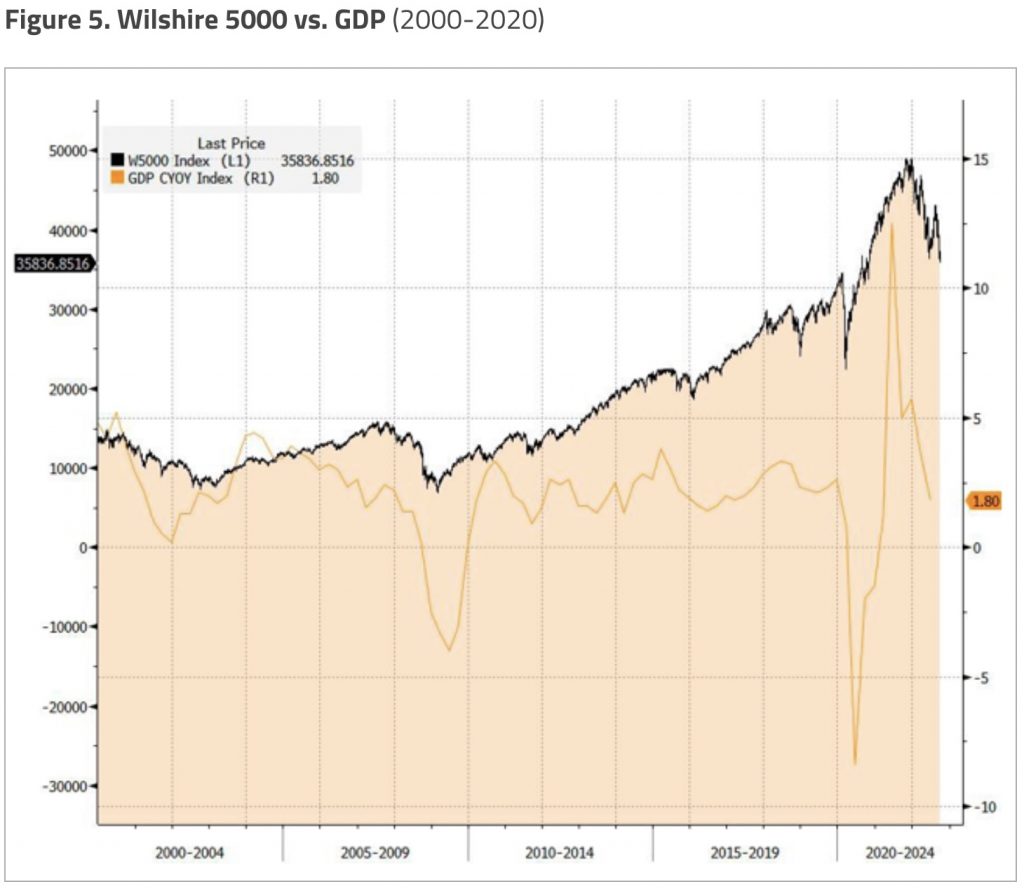 Our view continues to be that exigent circumstances will cause the Fed to abort its anti-inflation mission. Timing is always and everywhere speculation, but realistically there are too many leaks in the dike (faltering Treasury market liquidity, widening credit spreads, chaotic FX markets) for the Fed’s resolve to last much longer. Fed Vice Chair Brainard, in a nod to unruly markets, stated (WSJ, 9/30/2022) that the:

“Fed was attentive to financial vulnerabilities that could be exacerbated by the advent of additional adverse shock but the drive to tame inflation could set a higher bar for the Fed to deviate from its plans to raise rates.”

Really? Will the Fed drive the world economy over a cliff just to save face? Highly dubious, in our opinion.

Markets will celebrate a pivot, but the rally may not be long lasting. Most likely, inflation will survive an aborted Fed assault and public policy will revert to papering over mistakes as in 2008. If so, the outperformance of gold relative to financial assets may last for years. The historical precedent is from year-end 1968 (DJII 903.11) to year-end 1981 (DJII 932.95). During the same stretch, gold rose from $39.11 to $460/oz.

Gold May Anticipate a Fed Pivot
Gold and mining stocks may anticipate the coming pivot in advance of the headlines. Mining stock valuations on a relative and absolute basis are at rock bottom. The risk/reward is asymmetric to the upside. Figures 6-8 speak for themselves. The real investment challenge, all too familiar to the contrarian, is to muster the patience to wait. To paraphrase the words of stock trader Jesse Livermore, “get right and sit tight. It was never my thinking that made big money for me. It was always my sitting. Got that? My sitting tight”. The U.S. dollar lifeboat is no longer safe for occupancy. The wait for gold to be rediscovered as a safe haven is nearing an end. 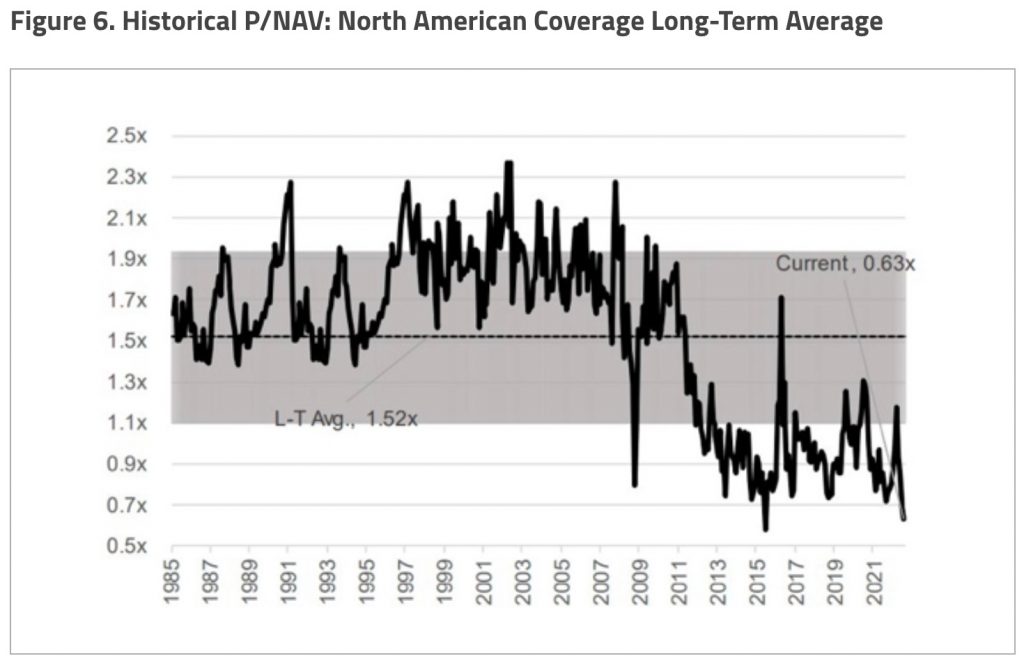 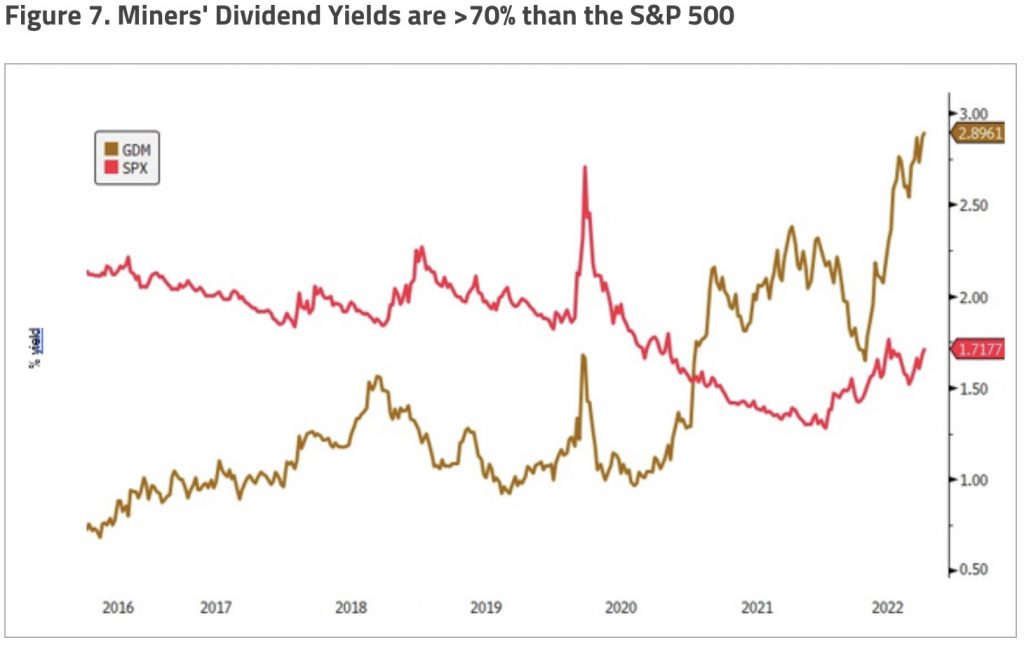 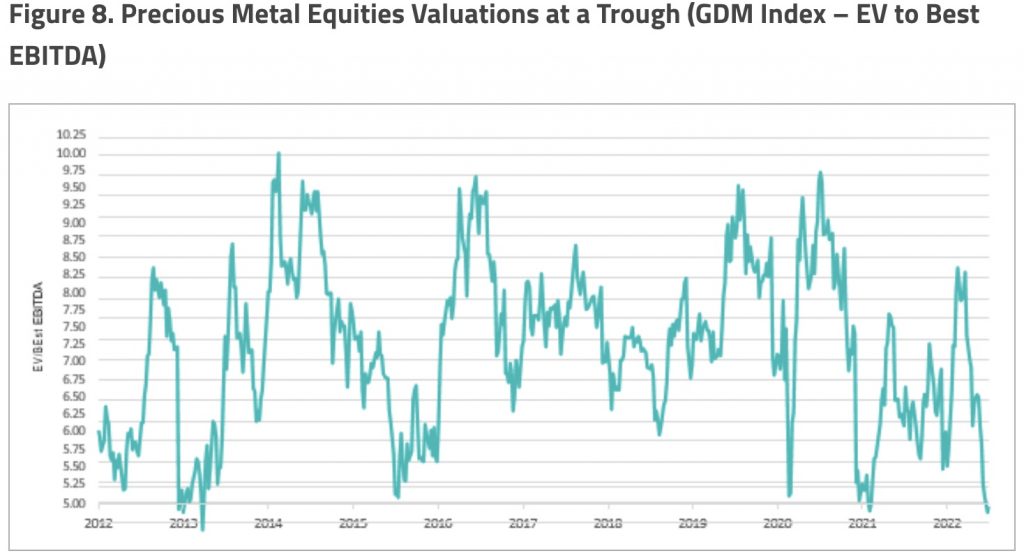 ***To listen to Alasdair Macleod discuss the unfolding banking crisis and how it will impact major markets including gold and silver CLICK HERE OR ON THE IMAGE BELOW.

Dow Plunges Over 800, Gold & Silver Tumble And Here Is What To Watch In The Metals