Silver soared as the U.S. dollar weakened today but here are some other surprises.

Silver
September 12 (King World News) – Graddhy out of Sweden:  Silver is moving strongly today, right now above MA50. We have a swing low, break of red DC(L) trend line, close above MA10, plus that MA10 is starting to turn up now. Means the daily cycle low (DCL) should be in place, and then probably also the weekly cycle low. 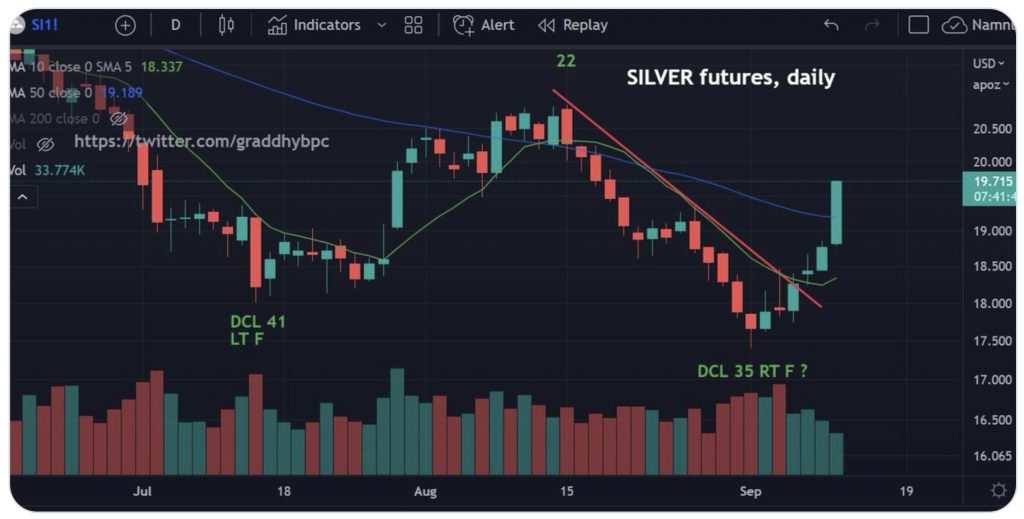 Inflation
Peter Boockvar:  While I’ve been thinking that a lower than expected CPI tomorrow would result in a 50 bps Fed hike in a few weeks rather than 75 bps, reading closely to what voting members Waller and Mester said on Friday tells me otherwise. Governor Waller said “The consequences of being fooled by a temporary softening in inflation could be even greater now if another misjudgment damages the Fed’s credibility. So until I see meaningful and persistent moderation of the rise in core prices, I will support taking significant further steps to tighten monetary policy.” Mester said, “I would welcome a good report on inflation, but I don’t think that one report is going to change my view that we’re just really at a high inflation level, and the risks are that it stays high.”

I’ll say it really doesn’t matter whether they hike 50 or 75 at this point, assuming they still hike at the last two meetings again as whether the fed funds ends up at a 3.5, 3.75% or 4%, the aggressive pace and high level (relative to the zero it stood at the beginning of the year) will still have its notable impact on economic growth and multiples. QT will still be taking place rather aggressively and at least to the economic impact, it takes quarters to cycle through and that is what we still have ahead, along with a drop in corporate earnings…

If you didn’t see in today’s WSJ, “Sliding Earnings Post Next Test for Markets.” In the piece, “Analysts have cut their estimates for third-quarter earnings growth by 5.5 percentage points since June 30, according to John Butters, senior earnings analyst at FactSet. That is more than usual and marks the biggest cut since the second quarter of 2020, when the Covid-19 pandemic and ensuing lockdowns brought economic activity to a standstill.” We can then of course debate what the right P/E multiple is to place on peak profit margin driven eps estimates and I’ll argue again it won’t bottom at 17x. That said, many stocks now have multiples much lower than that and thus look much more attractive relative to the S&P 500 index.

The news flow was really quiet overseas but we are seeing another drop in European natural gas prices because of the expectations of the cap, continuously being discussed, that the EU wants to place on Russian energy. Dutch TTF is down another 7% to 190 euros per MWH. In turn, German power prices are down almost 6% and has been the relationship recently, the euro is up about 1% vs the US Dollar and is quietly at a 4 week high. 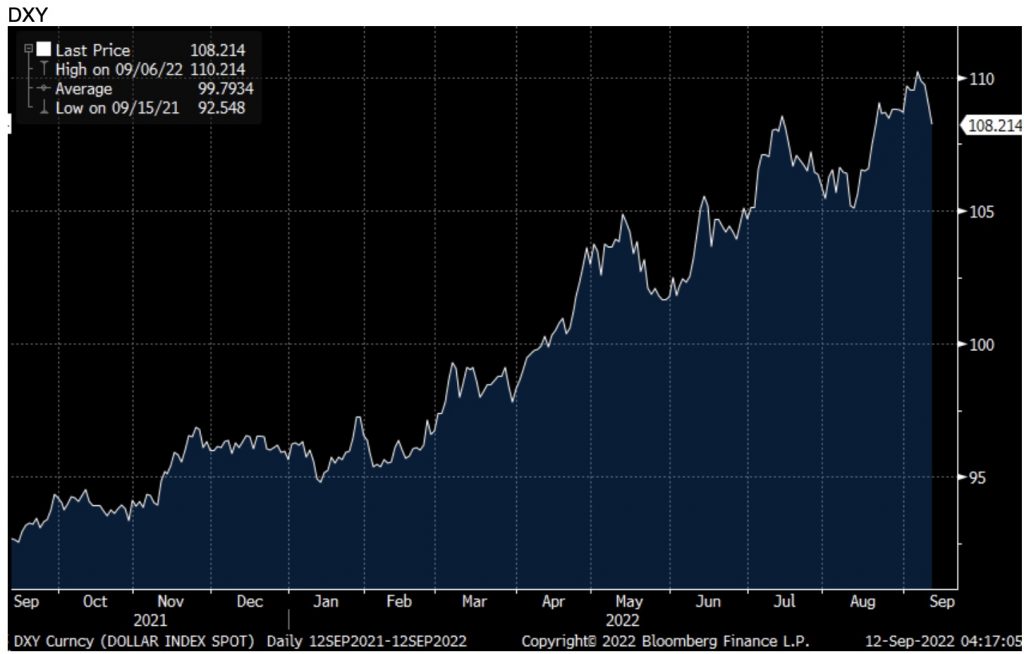 Also of course helping was the big ECB move, at least big for them. European stocks and bonds are following with their gains. While we can all hope that we’ve seen the worst with their with the energy shock, and markets have already adjusted, the pain will still be acute this winter and god knows what Putin does next.

The UK economy grew by .2% m/o/m in July but after falling by .6% in June and that also was below the estimate of up .3%. The June drop had a lot to do with the Queen’s jubilee and the days off people took. Services were ok in July but construction and industrial output contracted. We know the energy challenges the country faces and the enormous costs of capping prices for both households and business. Also, the mourning period for the Queen will also entail work holidays that will drag down September activity. The pound though is rallying due to the broad dollar weakness. The BoE will be meeting next week instead of this and it will be either 50 bps or 75 bps higher.

***To listen to James Turk discuss the chaos in Europe and the US as well as how silver and gold could vault to new highs quickly CLICK HERE OR ON THE IMAGE BELOW.