As we kickoff the week, the price of silver is soaring today as the shorts are being squeezed and a $50 price target was just issued, but look at this surprise.

A Wild Ride!
February 1 (King World News) – James Turk out of London:  We are only one month into this new year, Eric, and it has already been a wild ride. To say it has been unprecedented is an understatement.

It actually reminds me of the way 1973 began, just months after the election and President Nixon was beginning his second term. 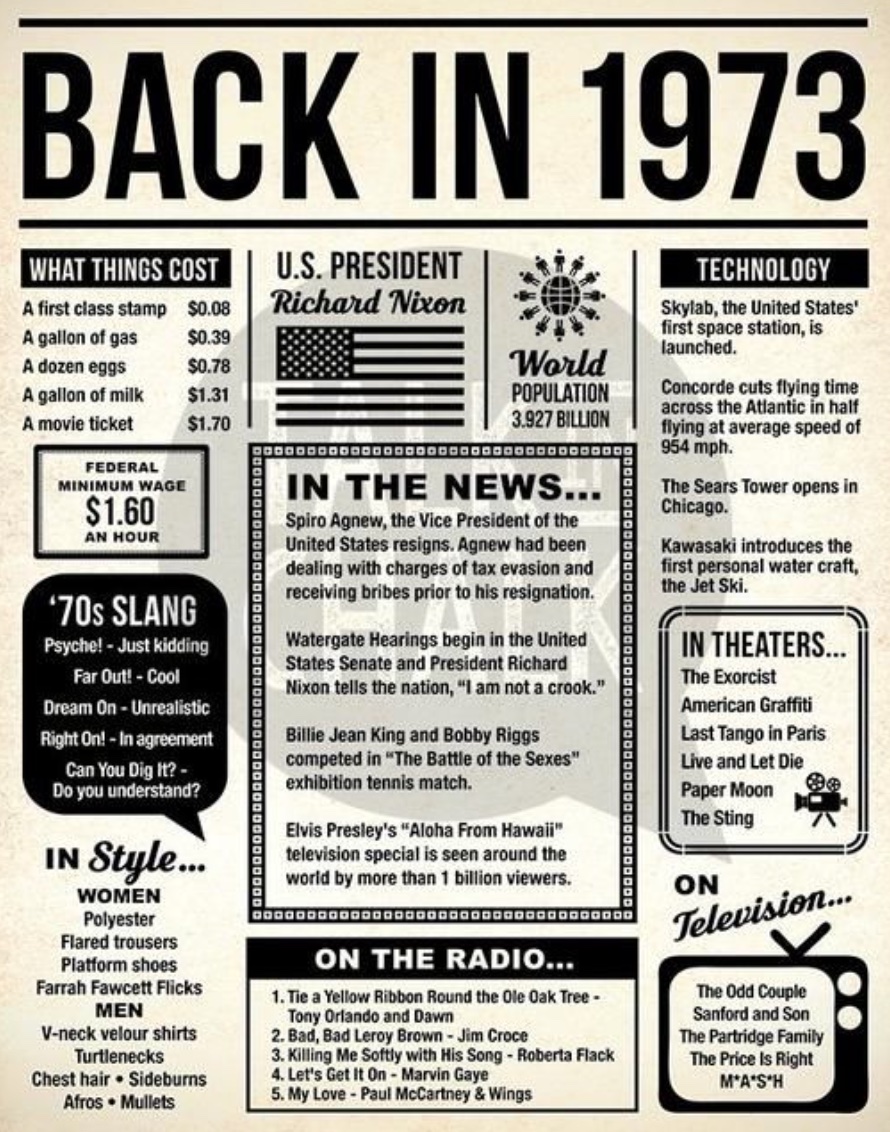 The dollar’s link to gold had already been suspended “temporarily” to use Nixon’s word. Stagflation – a weak economy and high inflation – was already apparent.

Nevertheless, despite these problems the DJIA had managed to climb above 1000, which was a level that had been impenetrable since it was first reached in the 1960’s stock market boom. The 1067 price reached that fateful month was the peak.

Stagflation remained the norm for the rest of that decade. But the outlook is worse today, judging from this chart of M1 money supply. Compare recent growth in the money supply to what happened in the 1970s. 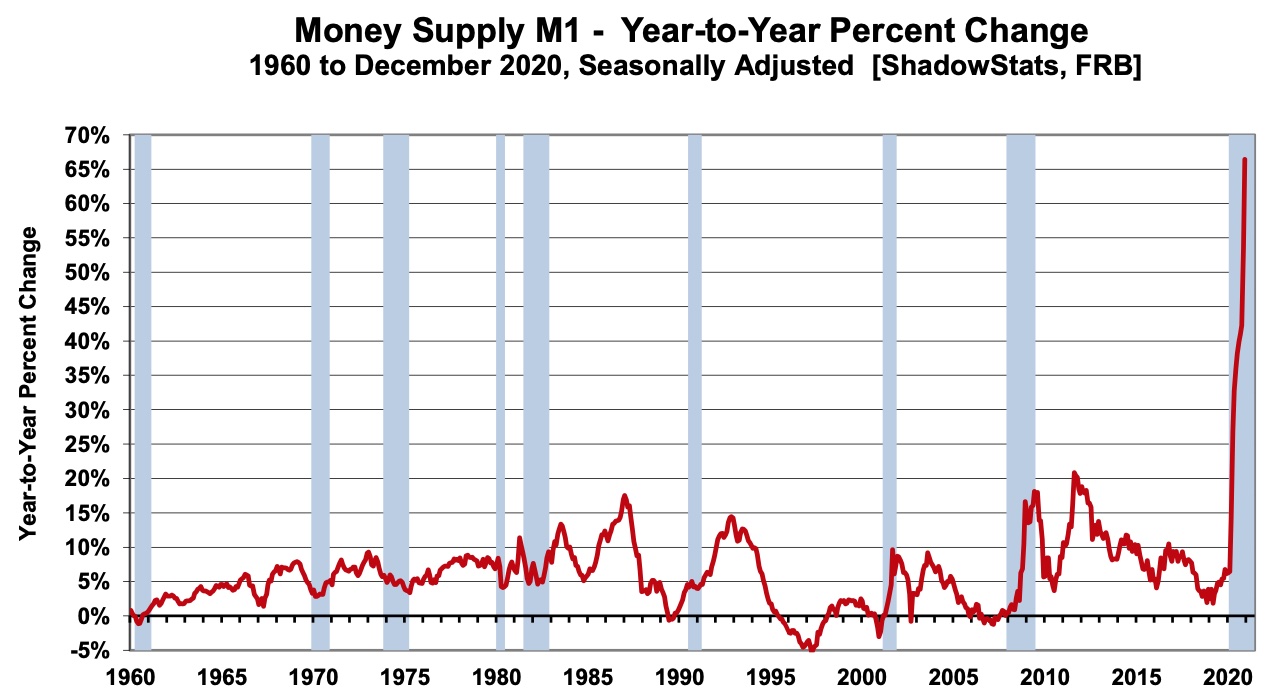 It is a shocking comparison. This kind of money growth is what you expect to see in a third world banana republic. And I haven’t even mentioned the growth in debt.

The Federal Reserve seems to have lost sight of the fact that money printing is not a substitute for vibrant economic activity. In other words, a country cannot print itself out of an economic mess. It only makes the mess worse.

There is another side to all this money printing and poor economic prospects. It encourages speculation, and we are seeing plenty of that, again just like I recall from January 1973.

There are so many extraordinary events of this past week to choose from, but GameStop is the obvious one. And there is more to it than just speculation.

It illustrates that the system is broken. There is no other plausible explanation for regulators and brokers, or in other words, the ‘system’, to allow a short position to equal 140% of a company’s issued capital.

I thought every short seller, and particularly those in supposedly sophisticated hedge funds, knew the famous adage coined by Daniel Drew, a legendary 19th century stock operator who warned short sellers: “He who sells what isn’t his’n, must buy it back or go to pris’n.”

The retail army buying GameStop want the short sellers to take responsibility for their foolish bets. But the closing of trading on certain platforms just rubbed salt in the wounds of the retail public who decry in social media platforms the hypocrisy of those managing this broken system.

But let’s step back and consider the real cause here, Eric. These events are the result of a broken system, not the cause of it. In other words, wet streets don’t cause rain.

The real cause of today’s trials and tribulations is a broken monetary system. Money is the heart of economy activity, and an inferior money results in an inferior economy. What’s worse, the dollar no longer is a neutral tool in commerce. It can be printed at will, and that ability does not favour the general public. This point is understood I believe by most of the retail investors breaking the shorts in GameStop.

Back in January 1973, generally there was a rosy outlook despite the dark clouds on the horizon. There are plenty of those clouds these days, with emotions running high and a lot of anger and resentment out there about real or perceived double standards. The consequences of Nixon’s decision five decades ago to abandon gold are coming home to roost, which is not a surprise to anyone reading the lessons of monetary history.

How Did They Buy 4% Of World Silver Production In One Day?
More questions on SLV. How did it manage to buy 4% of annual silver production added January 29? Also, prospectus says: contemplate, bulk, is represented by. Why doesn’t it say: requires, 100%, is. Therefore no certainty that SLV is 100% silver. If you buy silver in an ETF buy PSLV…

Expect $50 Silver
Ratio of Gold/Silver closed Friday at 68.7 breaking below 70 for first time in 4 years. Falling ratio is bullish for both precious metals but means silver is outperforming because it’s undervalued relative to gold. My Gold/Silver ratio target from the following chart is 40 ratio and with $2,000 gold that equals $50 silver. 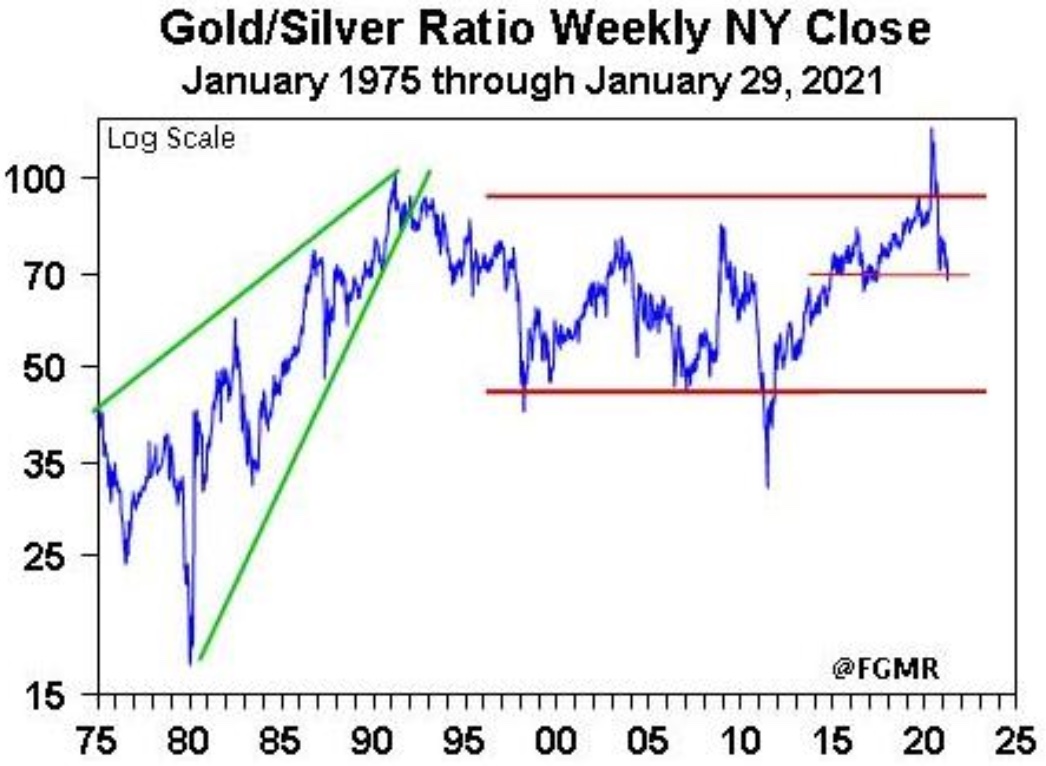