On the heels of the news that the French central bank has now come under enormous pressure to repatriate the French gold held abroad, today the man who predicted just days ago that other countries would follow the Dutch repatriation, said he was shocked at how quickly this situation has unfolded.  Below are his comments about the stunning ramifications of what has transpired.

Eric King:  “James, as you know French leader Marine Le Pen has sent a letter to the French central bank demanding the repatriation of French gold held abroad as well as an end to gold sales.  It’s astonishing this happened so quickly because just days ago you predicted other countries would follow the Dutch repatriation: 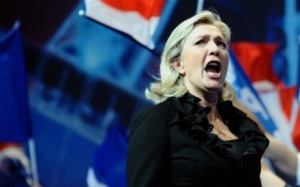 Turk’s astonishingly accurate prediction 4 days ago: “And the people (or entities) who own paper gold are getting nervous about not being able to convert their paper gold into physical gold, and that’s (already) resulting in a very tight physical market.  Gold’s main purpose today as far as any country is concerned is if a currency collapses in that country because of too much government debt, mismanagement by the central bank or whatever, they are going to need that gold in order to rebuild the currency system.

In fact, there was an important announcement by the Dutch Finance Minister who said, ‘After 2008, the Dutch central bank actually looked at reestablishing the guilder if the euro collapsed — if they couldn’t keep the euro together.  And you’ve got to believe that all of the European countries have these contingency plans.  And the key element of any contingency plan is getting control of the gold that you own.  That means bringing it back to a safe place where you know the gold really exists and that means putting it back in the vaults of the central bank of the country that owns that gold.  So the fact that the Dutch are doing this is very bullish.  But I think, Eric, you are going to see (even) more countries looking to get their gold back.” 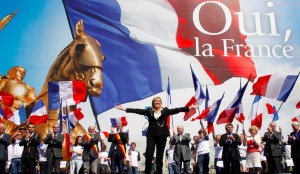 Eric King continues:  “I guess the announcement by Le Pen comes as no surprise to you since you just predicted other countries would look to get their gold back.”

Turk:  “I was surprised, Eric, that it happened so quickly after I predicted it.  But it’s not just countries that are nervous about whether they are gong to get their metal back.  There are also major entities out there who are owed significant amounts of gold, and they are getting very nervous about whether they will ever see their physical gold again.  So I think this squeeze that we are seeing for physical metal is going to continue at least through year end.

Eric King:  “So the fact that France now wants their gold back, it did surprise you in terms of how quickly it has unfolded.”

Turk:  “Yes, but when you get near a panic in the market this is what starts to happen.  We are not quite at panic levels just yet, but we are on the edge of it.  These entities understand that there is a fractional reserve gold system in place and it has a lot more paper promises to deliver gold, than actual physical gold that exists.

So the only way that gold is going to come available and remove the backwardation, which deepened once again today, is to have a much higher gold price than what we are seeing today.  We have the last of the options expiring tomorrow.  Once that is completed, I’m very optimistic about where the price of gold is headed.”

Eric King:  “Do you have any idea of how high the price of gold will go as the run on physical gold intensifies and the U.S. and London based fractional reserve gold Ponzi scheme collapses?”

Turk:  “It’s incredibly hard to predict because anything can happen to the price of gold at that point.  What we do know is that it’s going to be a hell of a lot higher than what we are currently seeing quoted.”

Greyerz:  “Eric, the Swiss Gold Initiative vote is now only days away.  The outcome of this vote is still of course very uncertain.  There have been so many undecided voters and they will ultimately be the deciding factor.  Meanwhile the Swiss National Bank (SNB) and the government have conducted a massive propaganda campaign against the initiative. 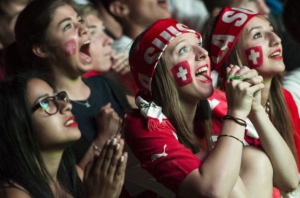 This is completely against the normal protocol of this type of vote but the establishment has totally disregarded this.  The reason they have taken such unprecedented steps to prevent a yes outcome is because they are desperate….

“They are desperate because they are extremely concerned that the disastrous investments of the SNB will be exposed.  Switzerland has pegged its currency to the euro at 1.20.  But over the last 50 years the Swiss france has strengthened against most of the world’s currencies.  And with a strong currency Switzerland has had a strong economy and a low inflation rate.

Also, Swiss industry has done very well with the strong currency.  But sadly the race to the bottom in global currencies reached Switzerland 3 years ago.  That is when the Swiss National Bank decided to peg the franc to the euro.  This will be seen as a disastrous policy in the fullness of time.  They claimed this was to protect Switzerland’s industries and jobs.  But this totally ignored the history of a strong currency benefitting Switzerland.

The problem is that a currency peg doesn’t work because a central banks says so.  It requires massive intervention.  This has created an explosion in the SNBs balance sheet since 2011, from 100 billion to 500 billion francs.  This represents a staggering 80 percent of Swiss GDP.  There is no other central bank in the industrialized world with such an inflated balance sheet.

Back in the 1990s Switzerland had around 40 percent of reserves in gold.  Today that figure has plunged all the way down to 8 percent.  Over half of Switzerland’s gold was sold at the bottom of the market.  So far this has cost Switzerland over 30 billion francs.  This is why the Swiss Gold Initiative will prevent any future gold sales.  Any central bank that sells half its gold at the bottom should be banned from any future sales.

The Swiss National Bank has printed over 450 billion francs in order to make risky investments.  They are now heavily exposed to the foreign currency markets, and they are short 470 billion Swiss francs.  So they are sitting on a massive speculative position.  This is the reason they can’t afford to lose the Swiss Gold Initiative.  It would mean an attack on the Swiss franc/euro peg.  This would cost the central bank tens of billions.

And if the currency position really went against them they would have to take a massive loss or print an enormous amount of money to counter the trend.  But to trade almost 500 billion Swiss francs in the market is almost impossible.  This is why the Swiss National Bank is campaigning daily because they stand to lose their excellent reputation with the Swiss people.

The SNB has always been a bastion of security and so the Swiss people haven’t realized that their national bank has gone from a position of 40 percent gold backing to a 500 billion franc currency gamble.  It is virtually guaranteed that their will be major currency losses in the next few years.  And this will happen whether the Swiss Gold Initiative wins or not.  Sadly the SNB has followed the example of most Western central banks and become a highly-leveraged hedge fund rather than a custodian of solidity and prudence. 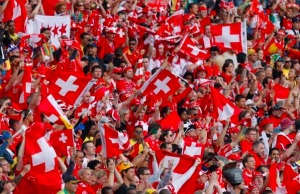 But, Eric, despite the problems Switzerland now faces, I still think it’s a great country.  As an example, Switzerland is the only real remaining democracy in the world where the people have a major say in what happens with the government, and the Swiss Gold Initiative is just one demonstration of this.  This is how the people can change the Constitution with a private initiative.” 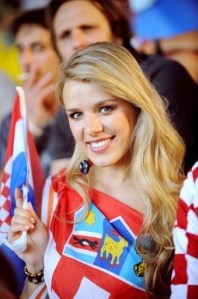 Greyerz added:  “Looking at the gold market, gold is clearly in an uptrend and has most certainly bottomed.  And all of the factors for gold are bullish as well as the technicals.  China and India continue to buy more than the entire annual global gold production.  Russia is also buying and of course they will never sell as some people are indicating.

And the global money printing will escalate dramatically in 2015, not only in Japan but also in Europe.  And in the U.S. QE will resume with a vengeance.  This will mean a very unstable world economy in 2015, but it will also mean a very strong gold market.”

Since PayPal without warning blocked donations to the Swiss Gold Initiative, an alternative method of payment has been set up.  The PayPal donations that were blocked have been refunded.  Donors can now pay  by bank transfer to a Swiss Post Finance account.  Alternatively, Bitcoin donations are also accepted.  Please click on the link below for details.”

Will This Trigger A Death Spiral For Stocks In 2017?