After Monday's massive selling pressure in the gold market, today King World News is pleased to feature a piece from one of the greats in the business discussing the fact that Monday's panic selling in gold has only occurred 6 times in history.  He also noted that movements in the gold price after each historic panic selloff were remarkably similar.

Jason Goepfert at SentimenTrader: There were whiffs of panic selling in gold on Monday, which normally happens within days of the metal forming a short- to intermediate-term low, but it says nothing about its long-term prospects.

For the past couple of days in this report in the update on gold stocks, we've been watching for heavy, exhaustive selling over the next several sessions as likely signaling a wash-out.

That's what's happening now, as Monday's activity had many of the hallmarks of panic selling pressure (see chart below)…. 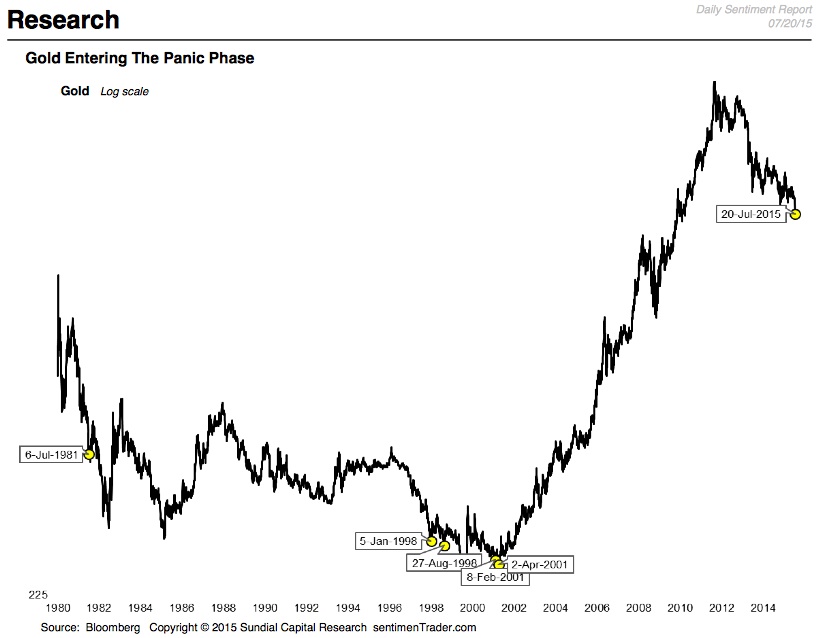 Gold and gold stocks were the topics of the day, trending on Twitter and plastering mainstream media websites something usually seen near exhaustion points. While volume wasn't as heavy as some prior lows, combined options volume on GDX and GDXJ set a new record high.

Among constituents in the HUI Gold Bugs Index, 75% of them sunk to a 52-week low, among the highest ratios in that index's history. Every time since 2000 new lows have been this high, gold and the miners have rallied over the next three weeks.

Price-wise, gold has now suffered at least five straight days of lower prices, set a 52-week low and had its largest drop on Monday.

In the history of the commodity, that kind of relentless selling has occurred only five other times, noted in the chart above. Only one of those was good for a long-term low, but all of them were a heads-up that the selling pressure was hitting a temporary exhaustion point.

By two weeks later only one of them showed a (small) loss and by three months later they were all positive. And as we've noted in prior reports, large commercial traders are near the least-hedged they've been in 10 years, historically a good sign for gold.

This kind of pattern is playing-with-fire kind of stuff. While most indications are that the panic selling should cease in the next day or two, that day or two could mean another 10% decline in the miners. Unlikely, but it happens.

Long-term, metals and the miners are clearly still in a bear market with broken support, so any setups based on price and sentiment extremes are trading-based only, and not necessarily a basis for investment. These charts are just a portion of one of the latest fantastic reports. To try a free 14-day trial of the internationally acclaimed work that Jason Goepfert produces at SentimenTrader simply CLICK HERE.