What is happening right now is devastating many people and businesses around the world. The bottom line is it’s not easy out there. 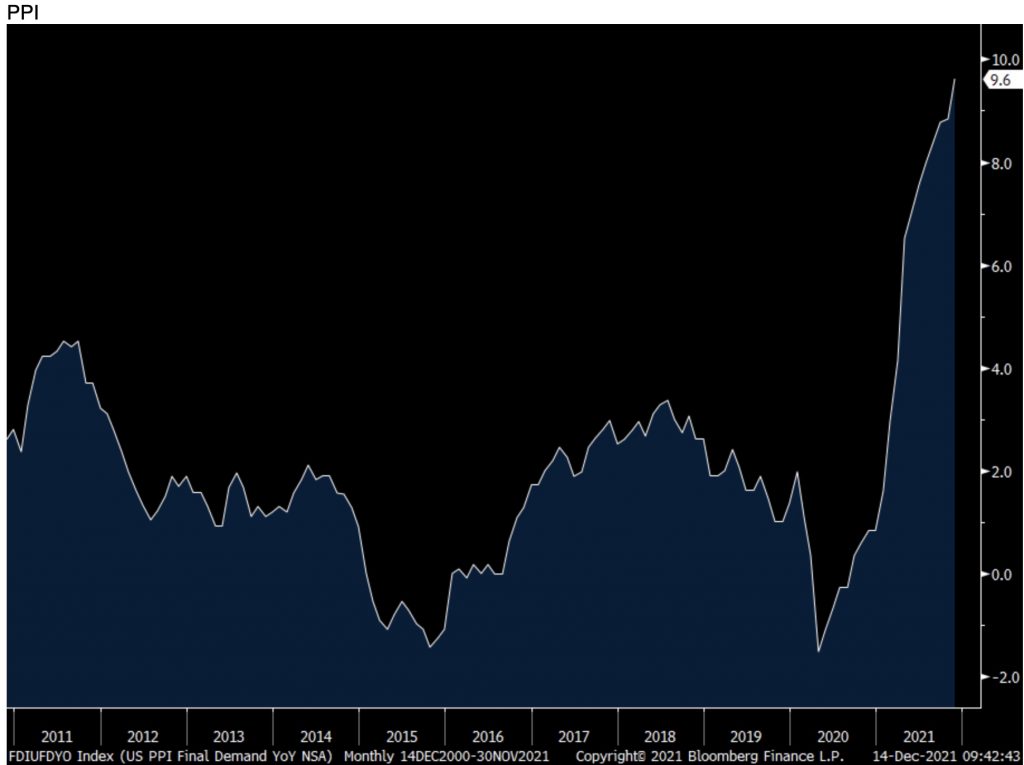 Core goods prices were up .8% m/o/m and service prices by .7%. Driving goods prices up were iron and steel scrap and industrial chemicals, outside of the increase in food and energy. Apparel/jewelry/footwear/etc… saw prices up 15.9% y/o/y. 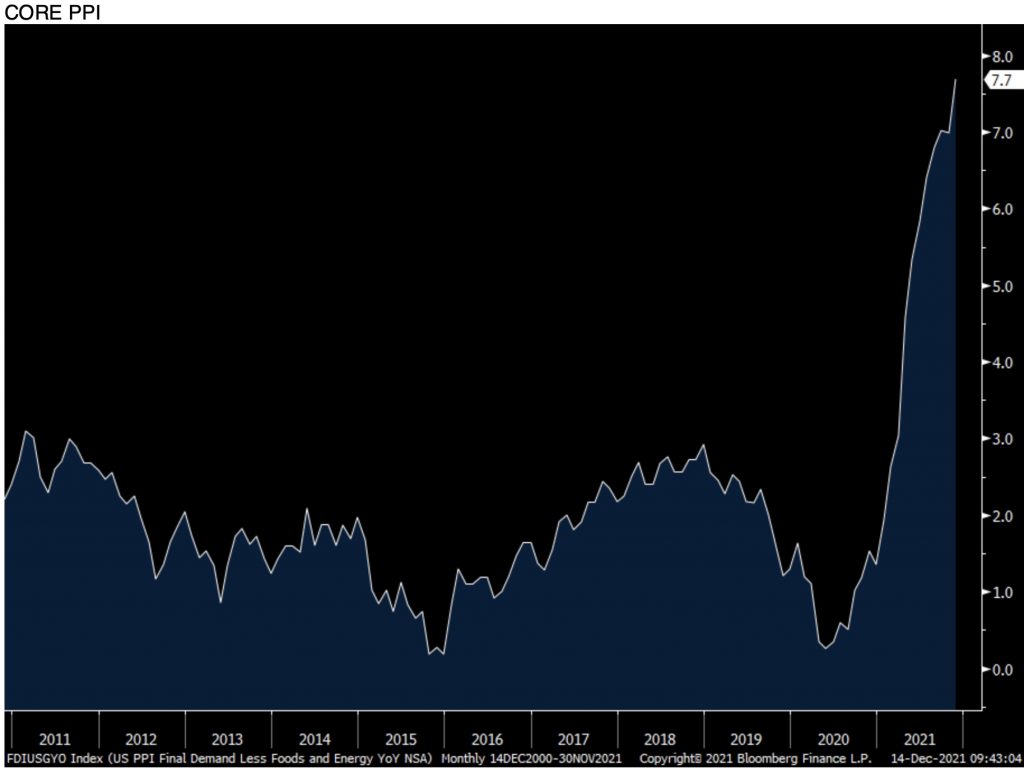 The wholesale prices of RVs, trailers and campers are up by 66% y/o/y to name another high flying good.

Bottom line, an almost 10% y/o/y increase in wholesale prices speaks for itself but beginning in February the comps start to get tougher and the rate of change will slow. The only question is thus to what extent. I’m hopeful that after the intense rush ahead of Christmas will likely see some relief in January on with the supply chains but I still think inflation will remain persistent through 2023 for many structural reasons I’ve stated many times this year and even last year.

Yields are at the high of the morning but the 10 yr yield is still below 1.50% because of the market confidence that the Fed is going to stamp out inflation and/or economic growth as seen with the flattening yield curve. They’ll still be increasing the size of their balance sheet for another 3 months however and if they hike 3 times in 2022, the fed funds rate will still be just .75-1.0%. That’s not exactly tight and if you think the Fed on their own volition will eventually get tight, I have a bridge to sell you.

It’s Not Easy Out There
In 2022, companies will continue to do their best to recover ‘lost margin’ and no, I’m not taking out energy prices whose price changes filter into so many goods. Companies will also try to manage via higher prices their rising wage costs along with what they can do on the productivity side.

With respect to wage costs, within the November NFIB small business optimism index which rose a touch to 98.4 from 98.2, current and future compensation plans held at record highs dating back to 1984. 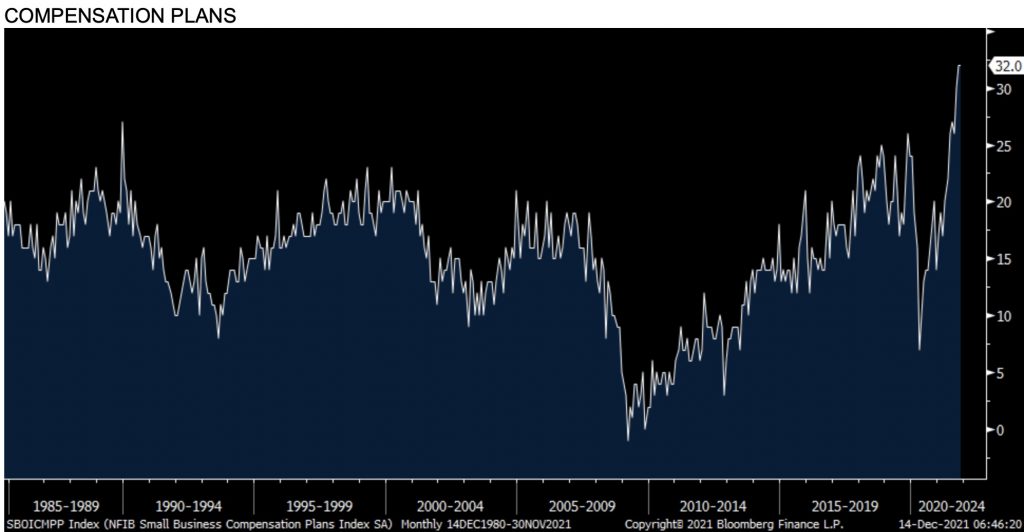 Plans For Higher Prices Highest Since 1979! 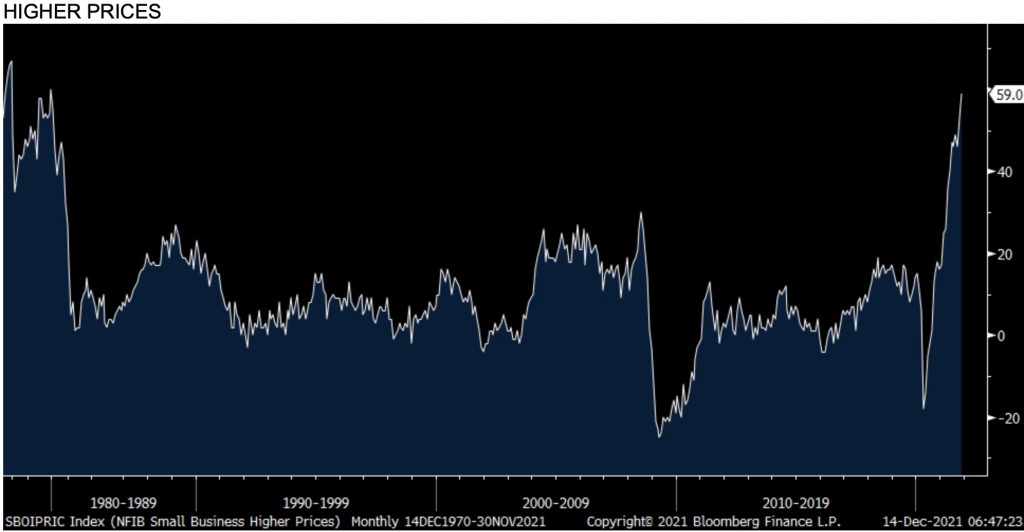 Plans to Hire fell 1 pt to 25 while Job Openings were down by 1 pt too to 48. It peaked at 51 in September. Capital spending plans fell 4 pts after rising by 3 last month. Plans to raise inventories rose 2 pts. Discouragingly, those that Expect a Better Economy declined another 1 pt to match the weakest level on record dating back to 1974 smack in the middle of that recession.

Those Expecting A Better Economy Hits Weakest Level
On Record, Lowest Since 1974 Recession! 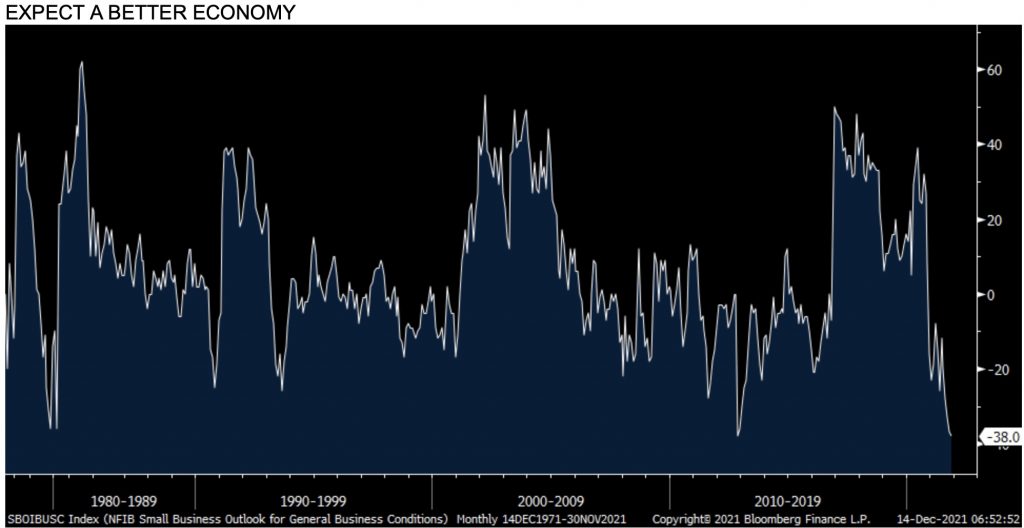 The chief economist of the NFIB said:

“As the end of the year nears, the outlook for business conditions is not encouraging to small business owners as lawmakers propose additional mandates and tax increases. Owners are also pessimistic as many continue managing challenges like rampant inflation and supply chain disruptions that are impacting their businesses right now.”

Zacatecas Silver Initial Silver Resource At Panuco Deposit
Zacatecas Silver, the well funded silver exploration company with a commanding land package in one of the world’s most important regions for silver has just published an initial inferred mineral resource estimate on their Panuco Deposit. The estimate of 16.4 Million silver equivalent ounces at 187 g/t AgEq includes a zone of 5.1 Million silver equivalent ounces at 235.25 AgEq (see company news release on December 14, 2021 for a breakdown of metal components). Interesting to note that while this is an impressive start for the company, which attracted early attention out of the gate for garnering backing from some world class silver investors such as Eric Sprott, the recent high grade drill results produced by the company (including an intercept of 2.17m at 823 g/t AgEq described by the company on November 23, 2021) are outside of this resource zone and therefore are not included in the resource estimate.

Panuco- A Pure Play on Silver
One thing important to note about the Mineral Resource described today is that a very substantial component is comprised of silver, with a small gold component. There are no base metals used within the equivalency calculations and this speaks to the fact that Panuco represents a very pure play on silver as it develops.

Mineral Resource Estimate a Great Foundation
Dr. Chris Wilson, Chief Operating Officer and a Director of Zacatecas comments, “This Mineral Resource Estimate of over 16 million silver equivalent ounces is a great foundation for Zacatecas Silver. Our experienced field team will continue to focus on Mineral Resource expansion drilling at Panuco, along strike and at depth, while also carrying out pure exploration drilling at newly identified regional targets within the large land package. Drilling is currently focused on the Tres Cruces vein to the north of Panuco where where the results from the first four diamond drill holes returned results of up to 2.17m at 823 g/t AgEq (as outlined in a 23 November 2021 News Release).”

Small Share Structure, Big Upside
Well financed, excellent early exploration results and now an initial resource estimate is a great combination but adding to the upside is the share structure. A lot has been accomplished already and has been done while the share structure has stayed small. Less than 53 million shares are outstanding and no warrants have been issued. This can provide real potential torque for shareholders as results continue to get generated via the active program on the ground targeting expansion of the Panuco resource and pure exploration on previously undrilled targets. Zacatecas Silver, symbol ZAC in Canada.