Strategic Political Reserve?
October 19 (King World News) – Peter Boockvar:  The continued draining of the SPR (and could continue into the winter) which should now be renamed the Strategic Political Reserve, gives continued reason to be bullish on energy as this action further disincentivizes new supply and eventually this reserve needs to be replenished as it was initially meant to be used for actual physical supply disruptions (as we should all know already), not to manipulate the price…

Mysterious Cayman Islands Buyer Strikes Again
As we discuss who are going to be the buyers of US Treasuries as the market loses the Fed, the banks and some foreigners like the Chinese and Japanese, buyers are coming from elsewhere, albeit at weaker prices and higher yields. According to the Treasury International Capital flow data out last night for August, foreigners bought up a huge $174b of US notes and bonds. That is the biggest one month pace ever and based on where it is coming from, it’s most likely coming largely from hedge funds and other private pools of capital as the UK (foreign buyers likely using its banks as the source) and the Cayman Islands was where most of the money came from. From the UK came $100b and $68b from the Caymans. Japan and China both were buyers of notes and bonds for the first time in many months but the Japanese let about $30b of T-bills mature that were not reinvested. As they intervened in September, I’m sure a further reduction in US holdings continued for Japan. 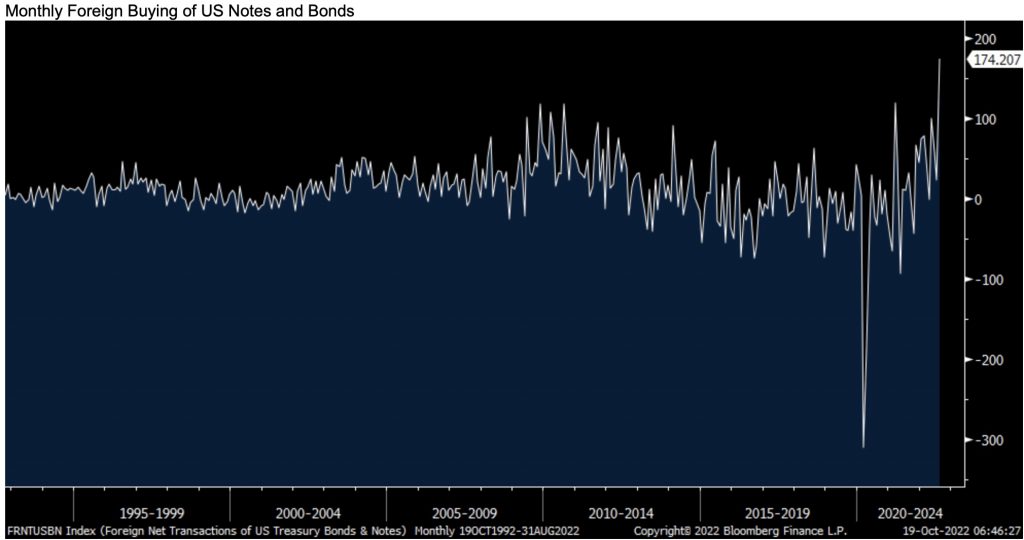 There will be always buyers of US Treasuries but at what price is the question and as seen in markets, it is at weaker prices and higher yields. As of this writing, the 10 yr yield is rising to a fresh 14 yr high at 4.08% following weakness in Asian and European bonds.

UK Pension Funds Panic Selling Assets After Leveraged Gilt Disaster
With respect to gilts, Deputy Governor of the Bank of England Jon Cunliffe penned a letter to the Treasury Committee in Parliament and said “Taken as a whole, LDI funds are now significantly better prepared to manage shocks of this nature in the future. As such, the risk of LDI fund behavior triggering ‘fire sale’ dynamics in the gilt market and self-reinforcing falls in gilt prices has been significantly reduced.” Let’s hope so but I’m hearing stories that pension funds are selling a variety of assets, including real estate, to firm up their financial positions.

40 Year High “Transitory” Inflation
The UK released its inflation stats today for September and headine CPI rose by 10.1% y/o/y with a core rate of up 6.5%, both one tenth more than anticipated. Input prices also grew more than expected while output charges were in line when including the August revision. In response, the 10 yr inflation breakeven is jumping by 13 bps to 3.78% after the sharp drop seen in the past few weeks. The next BoE meeting is on November 3rd, and the market is expecting them to step up to a 75 bps pace. Much of the gilt chaos is being blamed on Truss but the BoE’s snail walking on its monetary tightening is mostly to blame I believe.

Used Car Prices Coming Back To Earth
On the inflation front, Manheim said yesterday that wholesale used car prices fell 2% from September in the first 15 days of October and down by 10.3% y/o/y. So the price spike over the past few years continues to reverse and in coming months will further be reflected in the retail used car price gauges. We’re still waiting though for new car prices to cool but they at least seem like they are plateauing. 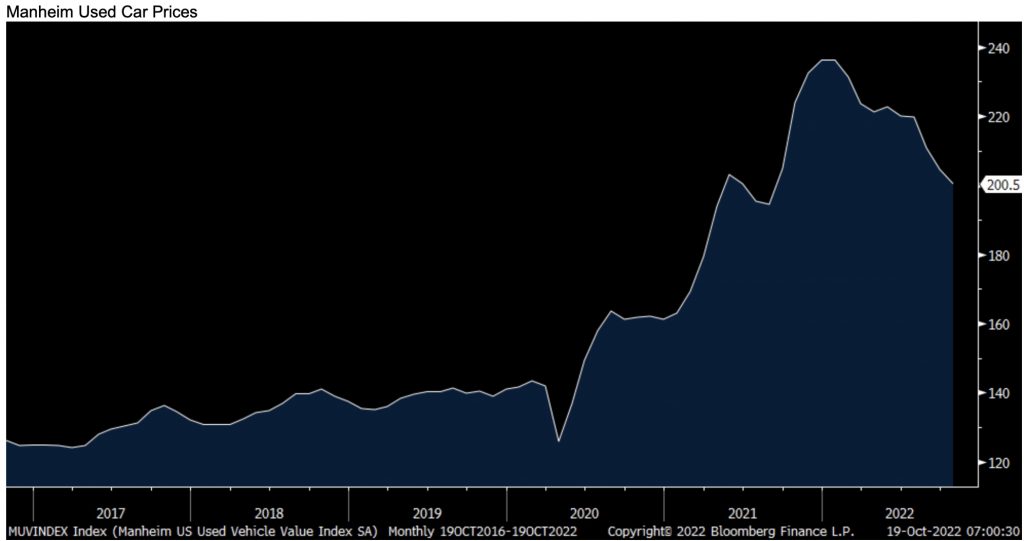 In terms of the transportation of goods, trucking company JB Hunt said a few notable things in their earnings call last night.

“While some improvement has been seen in rail service and company hiring challenges in particular with our driver force, we continue to face difficulties in equipment availability for growth and replacement along with the uncertainty of the direction of macro conditions” said the CEO.

The CFO said: “From a cost perspective, we continue to experience inflationary pressures across most areas of our business, but primarily around labor, equipment, including both parts and labor and in the area of claims. We are keeping a close eye on receivables, credit and bad debt as economic conditions change.”

With respect to preparation for the holidays, “peak season volumes aren’t where we would have anticipated them to be just, I don’t know, four or five months ago. Certainly would have anticipated stronger volumes. But peak season this year just doesn’t appear to be much of an event, I’ll just say it like that, while we’re still experiencing growth.” I’ll add my belief that part of this was inventory loading earlier than seasonal trends as companies didn’t want empty shelves again this holiday season.

Here is what UAL said in its earnings release, “Looking forward through the end of the year, the airline expects the strong Covid recovery trends to continue to overcome the recessionary pressures in the macroeconomic environment. The airline now expects fourth quarter adjusted operating margin to be above 2019 for the first time.” As for the main factors in their optimistic outlook, “The company believes there are three durable trends for air travel demand that are more than fully offsetting any economic headwinds: air travel is still in the Covid recovery phase, hybrid work gives customers the freedom and flexibility to travel for leisure more often, and external supply challenges will limit industry supply for years to come.” And the latter will give them extra pricing power I’ll add.

Housing starts in September totaled 1.439mm, just under the estimate of 1.461mm and down from 1.566mm in August. Of note, and on the heels of the 38 print in yesterday’s NAHB builder survey, single family starts fell to 892k from 936k and that is the least since May 2020. 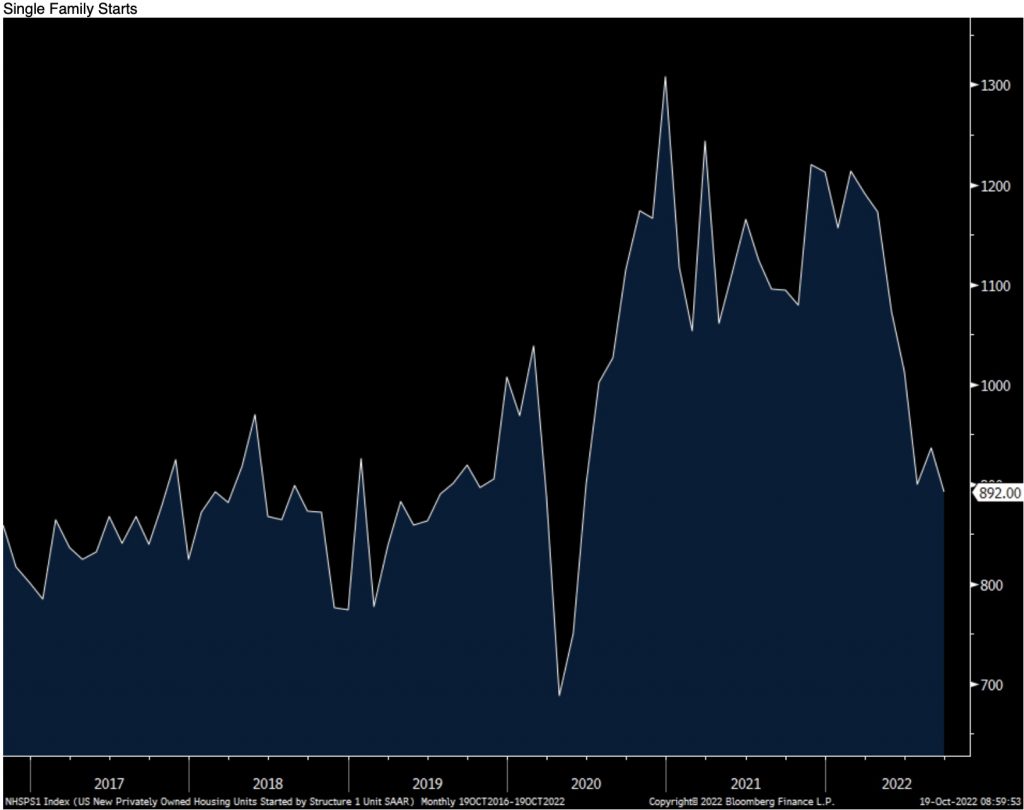 Multi family starts, which are very volatile month to month, fell to 547k from 630k in August and vs 477k in July and 562k in June. We know all about the tightness in the rental market but we are slowing getting more needed supply. 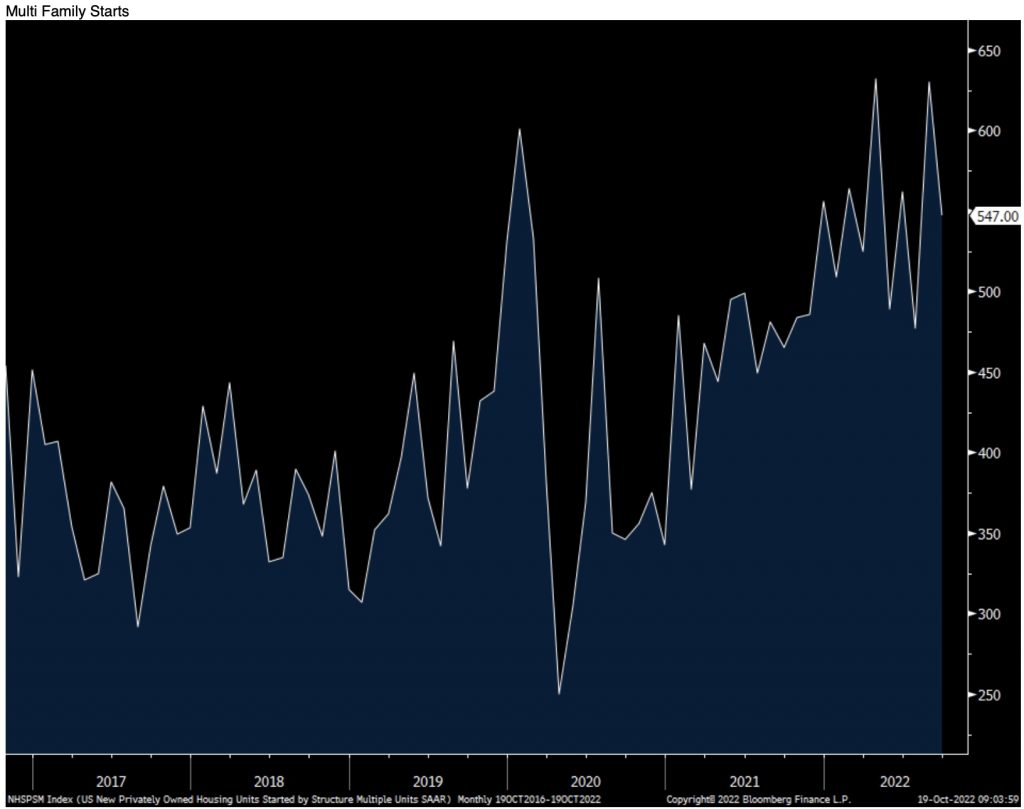 With respect to permits, they fell again for single family, also to the lowest since 2020 but multi family permits increased after the August drop.

Bottom Line
Bottom line, it’s obvious why single family starts are falling and obvious why multi family construction remains healthy. The rental market supply/demand was offsides even before the mortgage rate spike which means even more demand for rentals.