One of the greats in the business just flashed this alert on gold and the miners.

This piece was delayed from being published due to technical difficulties that have now been resolved. KWN apologizes for the delay.

Gold & Miners: Bridging The Performance Gap
By Trey Reik, Senior Portfolio Manager, Sprott USA
December 1 (King World News) – In this month’s report, we examine the interplay between gold bullion and gold equities. This relationship has been noteworthy in 2017, given an anomalous performance gap that we believe may provide investment opportunity for precious metals investors.

At Sprott, we view investment merits of gold and gold shares as distinctly different. Gold offers the ability to remove investment capital from the traditional financial system at a moment’s notice. Gold shares, on the other hand, offer two important variations. First, gold mining equities provide well-documented torque to cyclical advances in spot gold prices. In essence, high-quality gold miners introduce a value-creation proposition to the secular opportunity of rising gold prices. Second, we believe gold shares represent a tactical portfolio allocation capable of generating significant alpha during periods in which excessive ebullience for U.S. financial assets is being recalibrated. We suspect that we may be coming upon one of those periods now…

We have organized this report into three sections. First, we examine the traditional contention that gold mining equites provide “beta-to-bullion” torque to rising gold prices. Are there tangible fundamentals supporting this relationship? Second, we document the relative performance of gold bullion and gold shares during the past two years and offer our interpretation of contributing factors. Third, we turn our attention to current prospects for gold shares.

I: Gold Mining Equities Provide Torque to Gold
The beta-to-bullion reputation of gold equities is based on sound fundamentals. Gold mines involve significant fixed costs underpinning highly variable revenues. The math of a rising gold price implies strong operating profit leverage over both imbedded development and construction costs as well as ongoing costs of extraction. Additionally, a rising gold price can increase the proven-and-probable reserves of most mining companies, even in the absence of new discoveries. SEC accounting rules require that gold miners report their mineral reserves based only on the portion of their ore bodies which can generate profits at the prior-three-year-average gold price. As the gold price rises, miners convert their mineral resources to reserves based on their audited assumptions of profitability. Finally, a rising gold price fuels expanded corporate exploration budgets, in turn enabling the value creation of potential new discoveries. Because most gold is found close to existing deposits, a rising gold price reflexively enhances the value of miners’ existing land packages.

Gold Supply/Demand Feedback Loop is Unique among Commodities
There is a unique aspect to market “feedback loops” which differentiates gold from other commodities. In most commodity markets, rising prices attract increased capital investments, which in turn foster increased supply and eventually lead to softer pricing for the underlying commodity. This supply/demand feedback loop is far less relevant in gold markets because, unlike any other commodity, almost all the gold ever produced remains above ground in one form or another.

Gold’s above-ground stock (currently 187,200 metric tons) towers above annual mining production (currently 3,222 metric tons) to such a huge degree that annual mining output is a negligible factor in reigning market pricing. Further, gold’s rarity and the daunting physics of its extraction bring unyielding inelasticity to the global gold mining industry. For example, in 2001, spot gold averaged $271 and global mine production totaled 2,645 metric tons. In 2012, the gold price averaged $1,669, a 516 percent increase over 11 years, yet global mine production increased only 9 percent to 2,883 metric tons [all GFMS statistics]. We can think of very few businesses in which a decade-plus sextupling of the product price barely budges industry capacity! The point here is that during secular advances in the gold price, gold mining equites do not face headwinds of industry production responses. The chart below illustrates how annual mine production has remained fairly steady since 2001, while prices have been generally trending upward. 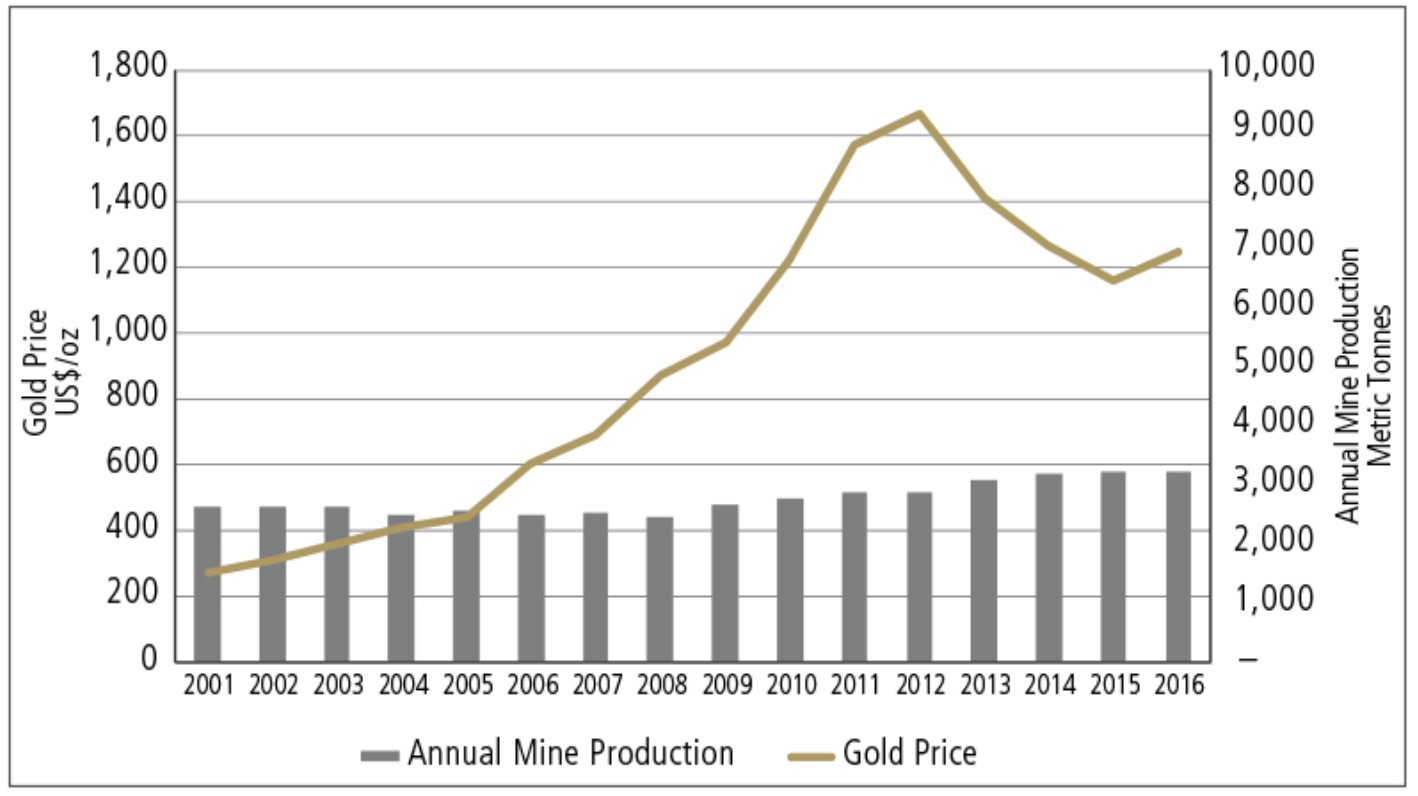 Source: GMFS, Thomson Reuters. Gold price is based on the “London PM”, i.e., the London Bullion Market Association (LBMA) Gold Price that is set at 15:00 London GMT in US dollars.

II: Performance of Gold Bullion and Gold Equities in 2016 and 2017
The obvious flip side of gold share torque is the fact that this gearing works in both directions. During extended periods of gold price weakness, the investment merits of gold mining companies can become increasingly challenged. Along these lines, after spot gold’s 10-year, 657 percent gain through its intraday high of $1,921 on Sept. 6, 2011, spot gold declined 45.53 percent through its Dec. 3, 2015 intraday low of $1,046. During this four-year “correction,” the NYSE Arca Gold Miners Index (“Gold Miners Index”)[i] declined 81 percent to its low of 347.41. Along the way, the spirits and sensibilities of an entire generation of gold equity investors were sorely tested, while generalist investors simply abandoned gold miners as a relevant asset class.

Gold Equities Soar in 2016 …
Of course, from such sentiment depths are often born the greatest investment opportunities. Following the lead of spot gold’s December 2015 trough, gold equities marked their ultimate low in January 2016. Then, following the lead of spot gold’s 29.59 percent surge year-to-date through July 6, 2016, the Gold Miners Index powered to a 129.51 percent year-to-date gain by Aug. 10, 2016. On the same day, one Junior Gold Miners Index[ii] reached a year-to-date gain of 167.87 percent. As is so often the case with gold shares, their post-trough sentiment inflection generated electrifying returns during the first half of 2016…

Then, after consolidating summer gains in orderly fashion through the fall of 2016, the gold complex was rattled by the game-changing election of President Trump. Even so, by year-end 2016, spot gold had consolidated a calendar year gain of 8.03 percent, while the Gold Miners Index and the Junior Gold Miners Index finished the year with sterling gains of 54.57 percent and 75.28 percent, respectively.

What accounts for the lagging relative performance of gold shares during 2017?

When Gold Bullion Takes the Lead, Equities Likely to Follow
While gold shares are commonly viewed as a harbinger for gold bullion’s prospects, there are many instances (such as during the bottoming process of spot gold in December 2015 followed by gold shares in January 2016), in which gold must take the lead to set the course for the gold complex. During 2017, spot gold has traded largely in a $100 trading range (between $1,200 and $1,300). Spot gold had flirted with a breakout above $1,300 on three occasions before a September round-trip to $1,358 (then back below $1,300). While gold shares’ relative valuation versus bullion rests near historic lows, we expect gold will need to break convincingly above its 2017 trading range before animal spirits truly return to gold shares. When this occurs, gold shares will be poised for an explosive move.

Are Investors Gun-Shy Because of 2015 Declines?
Our interpretation of the listless 2017 performance of gold equities is that investors simply remain a bit gun-shy from painful share declines through 2015. Even during the steep run-up of first-half 2016, prominent gold-equity vehicles experienced only negligible capital inflows, and now the post-Trump gold correction seems only to have reinforced investor indifference towards the space. As a result, prominent gold miners still trade near their cheapest valuations in decades. As shown in Figure 2, below, the average price-to-NAV multiple for the 12 seniors in the Canaccord gold-miner universe has ranged between 0.53x and 1.40x since 2009, with an eight-year average of 0.85x. Today the blended price-to-NAV multiple stands at just 0.60x! 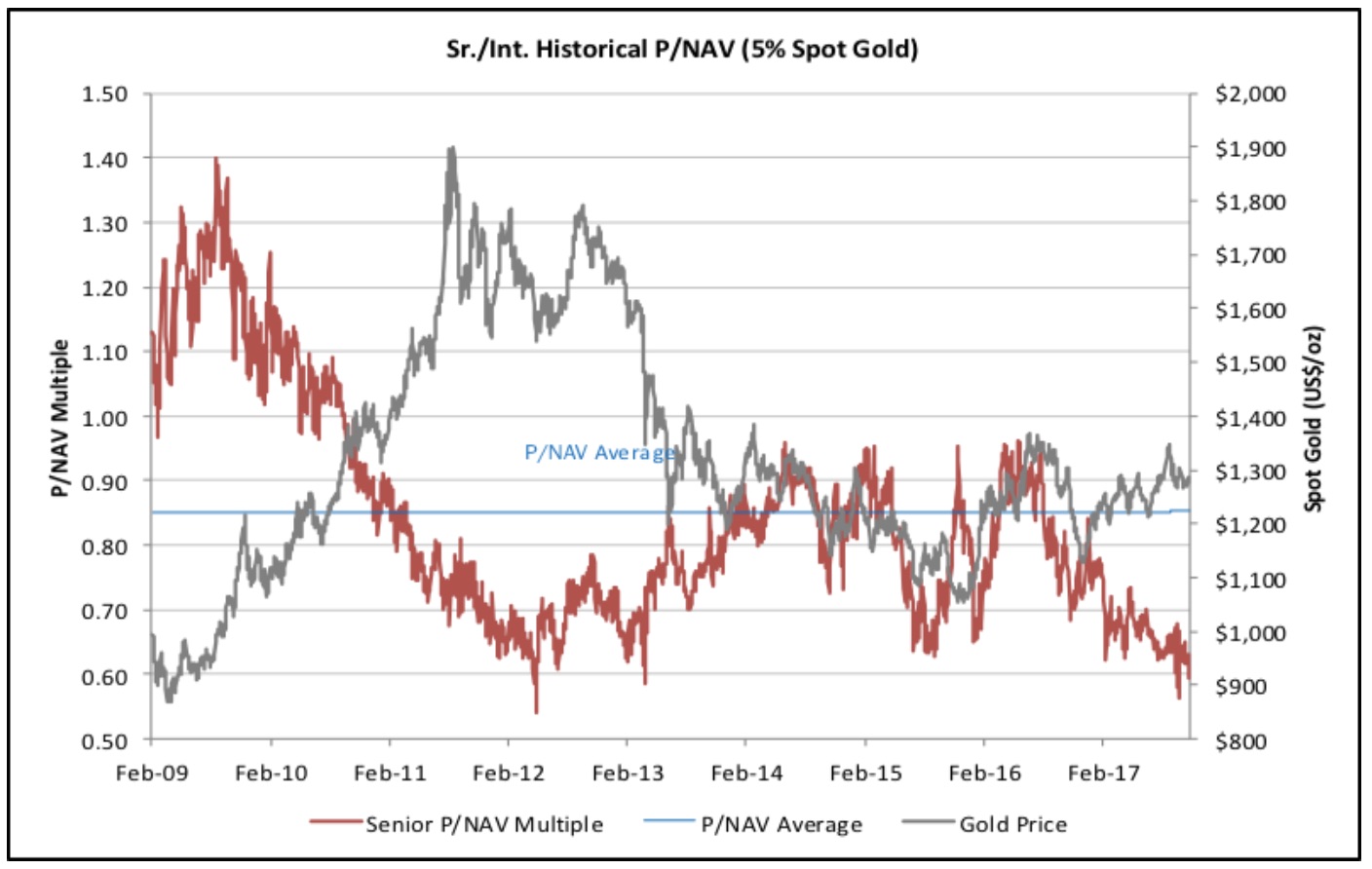 III: Current Prospects for Gold Shares
Ebullient equity markets and a range-bound gold price have constrained investor enthusiasm for gold equities during 2017. Despite significant gains during 2016, gold shares remain near historic lows in many valuation metrics. As shown in Figure 3, below, during 25 years through 2008, the ratio of the XAU Index to spot gold averaged 0.2497x but today rests at only 0.0632x. We recognize there are several legitimate factors contributing to this ratio’s decline. Component XAU companies have issued more shares, contemporary mining opportunities are increasingly challenging and gold miners are still disabusing investors of their reputation for poor capital allocation. Nonetheless, we view the 75 percent decline in relative valuation between prominent gold miners and their sole output as an investment opportunity offering compelling reversion-to-the-mean potential. 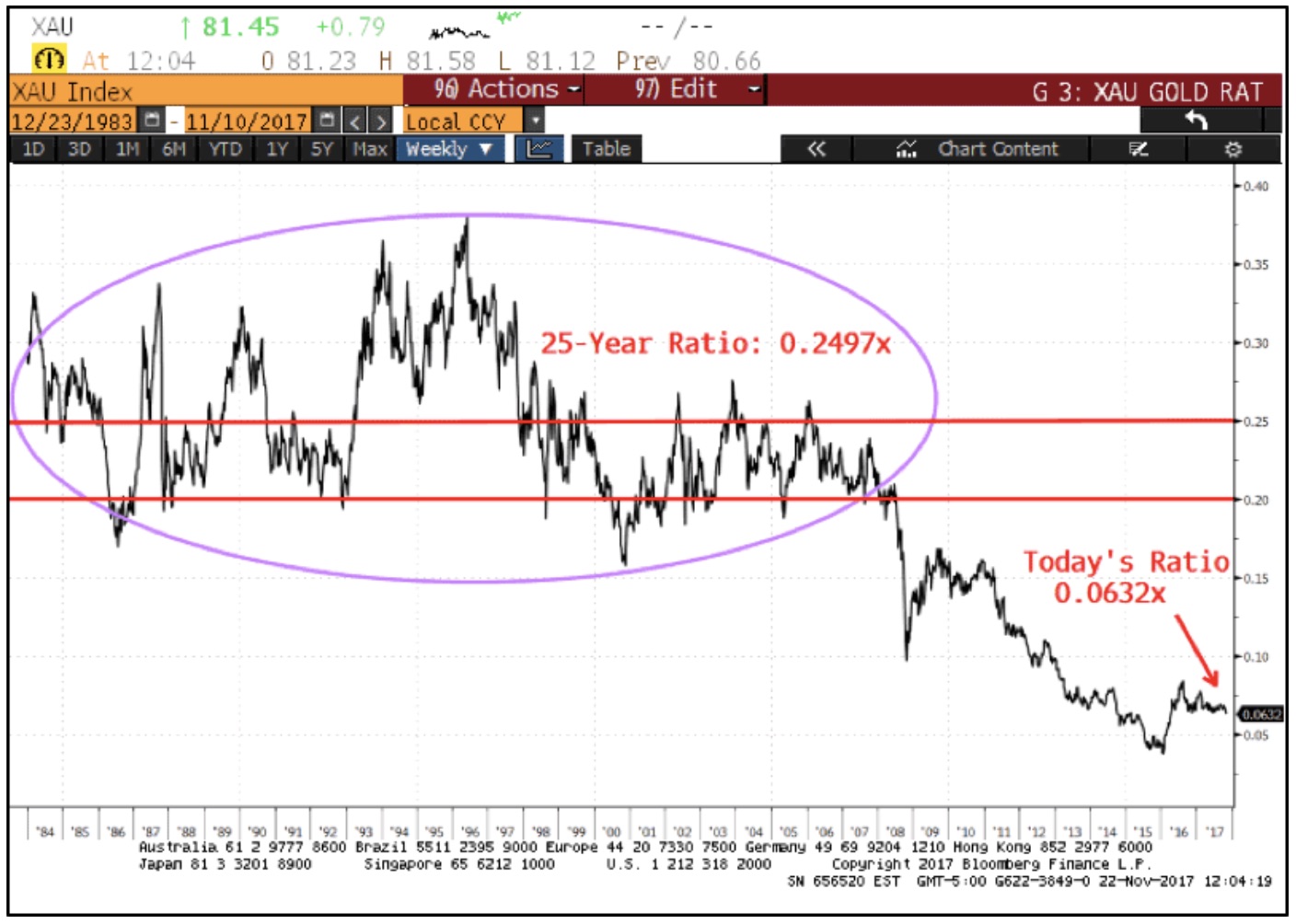 The Compelling Logic of Gold Shares
Further, we believe gold miners represent an effective tactical portfolio allocation to generate performance alpha during corrective periods for overextended U.S. equity averages. Since 1996, there have been two pronounced periods of inverse correlation between the S&P 500 Index and the Gold Miners Index: 1996-through-2002 and 2012-through-the-present. In the first instance, gold shares were literally left for dead as the internet bubble hit full stride through March 2000. Then, as the S&P 500 fell 52 percent, gold stocks tripled. In the current episode, the S&P 500 Index and gold shares have (somewhat counterintuitively) moved in precisely opposite directions ever since the Fed’s September 2012 announcement of QE3. During the first half of 2016, this gaping divergence finally appeared to be closing. Since the Trump election shock, gold shares have stabilized, but the S&P 500 has resumed its upward trajectory. We expect the “jaws of life” divergence between the S&P 500 and gold equity indices to close with trademark gusto in the near future. Currently, the redeployment of a portion of general U.S. equity exposure to gold shares represents a non-consensus portfolio allocation with highly compelling logic. 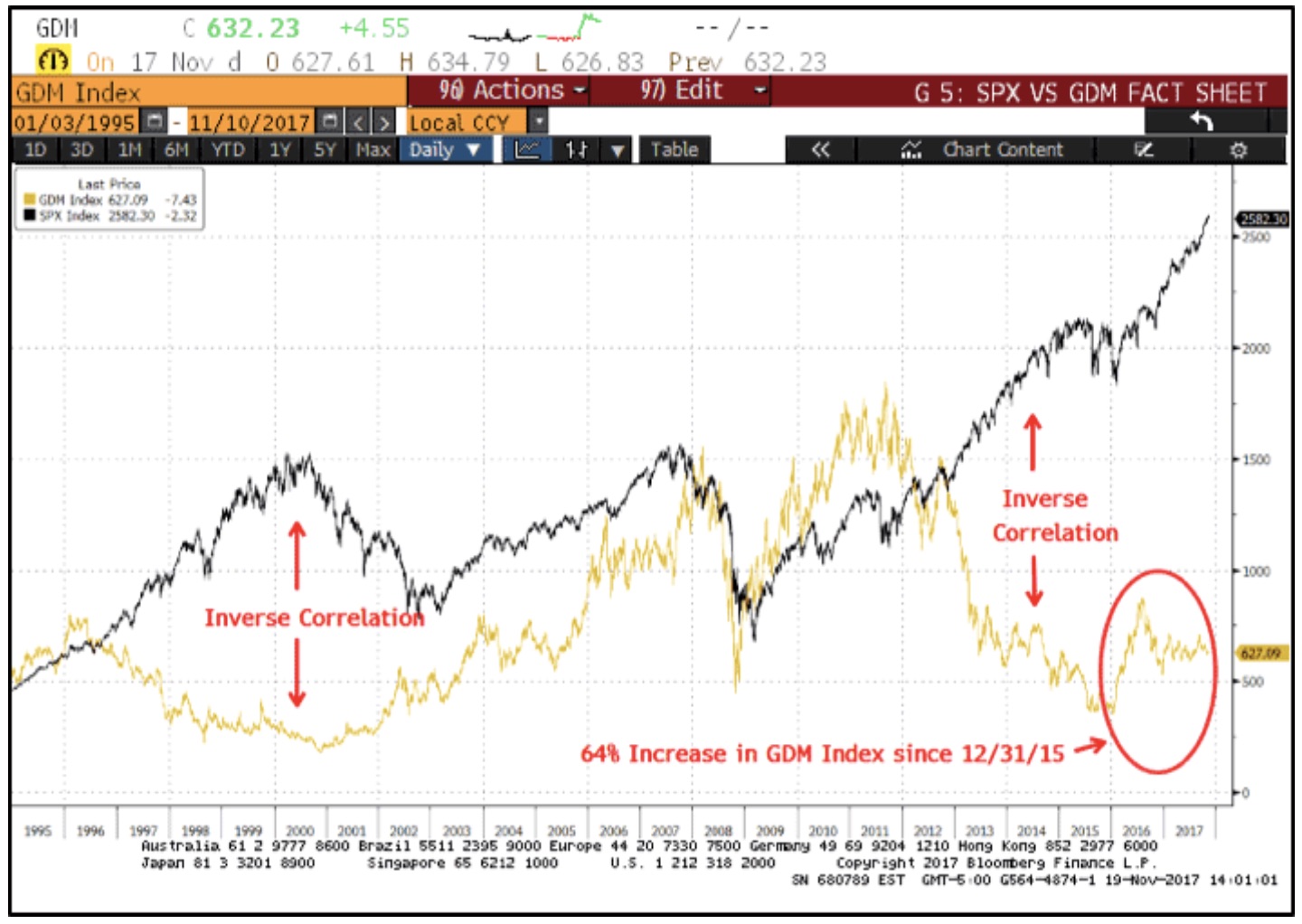 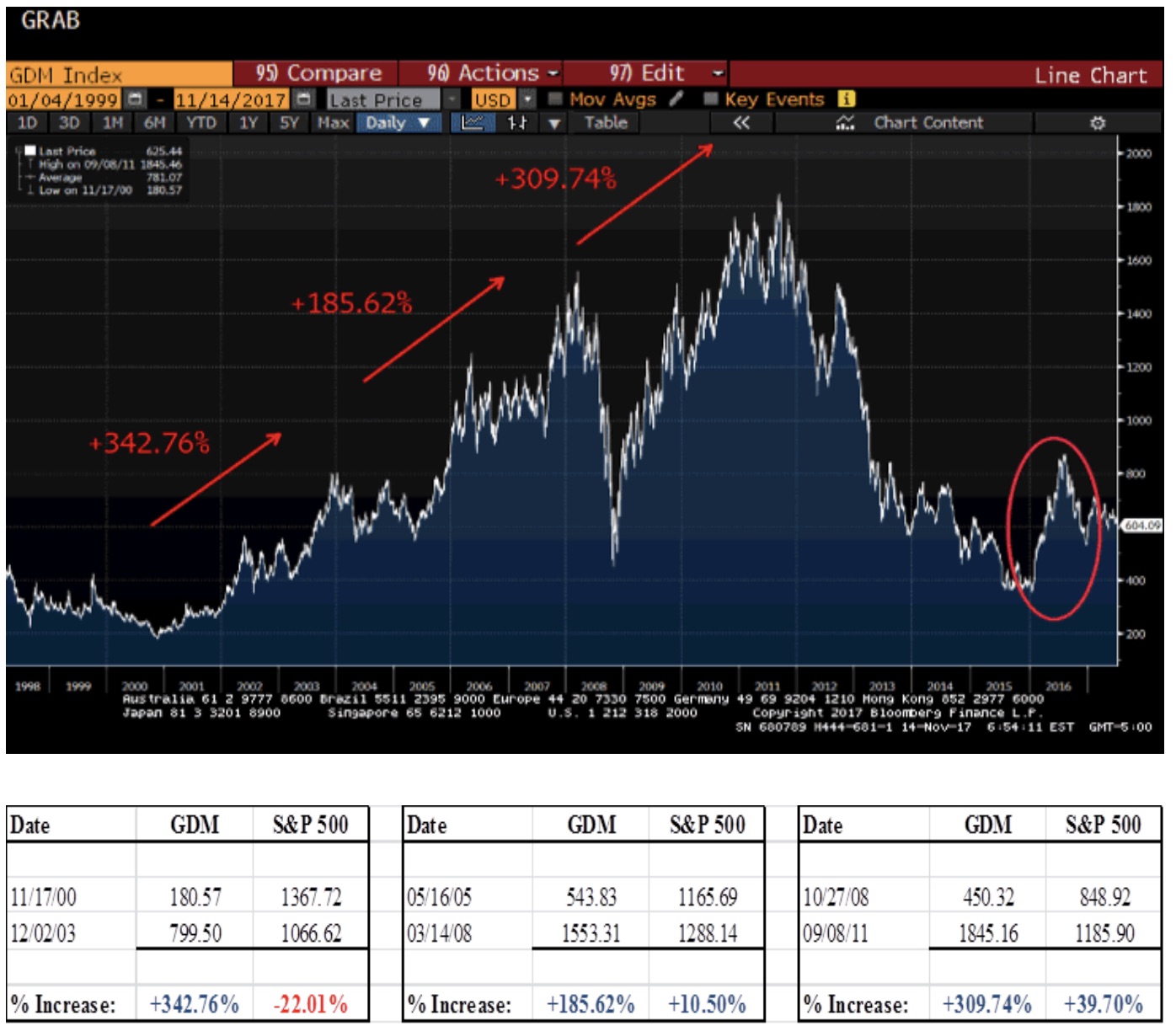 While it is still too early to know for sure whether a fourth primary advance for gold shares will resume, the risk-reward is compelling at a time when current valuations for U.S. financial assets appear stretched.

If you have any questions or comments regarding the report above, please contact a Sprott representative at 800-477-7853, or in the United States or internationally call 866-531-8746.

***ALSO JUST RELEASED:  One Of The Most Important Things Anyone Has Said About The Decline In Gold And The Miners CLICK HERE.