ALERT: Soaring US Dollar’s Impact On Major Markets Including Gold

Here is a fascinating look at the soaring US dollar’s impact on major markets including gold.

US Dollar Index Is Soaring
July 13 (King World News) – Jason Goepfert at SentimenTrader: A surging dollar and its impact on markets.

The surging dollar and its implication for stocks
Bloomberg recently noted that the incessant rise in the U.S. dollar is likely weighing on investor sentiment. While dollar trends have a complex impact on other markets, particularly stocks and their various industries, it’s generally accepted that a rapidly rising dollar is a net negative.

“The “extreme” rally in the greenback over the past year typically comes alongside market stress or recession, or both, Michael J. Wilson, chief US equity strategist at Morgan Stanley, wrote in a report Sunday…As such, the surge will be a “massive headwind” for profits at many large US firms and another reason to expect a dimming earnings outlook, he wrote, adding “the recent rally in stocks is likely to fizzle out.””

Mr. Wilson certainly looks prescient so far, and we’ll have to see how investors absorb the latest inflation readings in the days ahead. Regardless, there is no question that the dollar has been a focus, and there is no mistaking its trend. The U.S. Dollar Index is soaring, and even a trade-weighted version calculated by the Federal Reserve is now up 10% from a year ago. 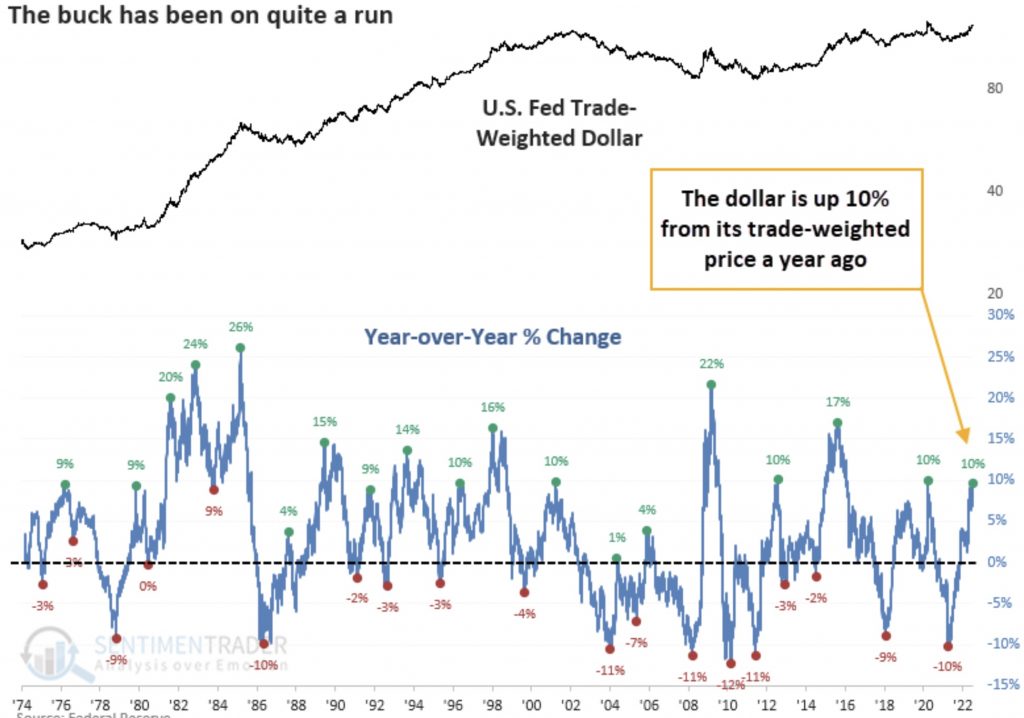 The dollar has knocked aside headwinds like seasonality and sentiment. Its pullback over the past few sessions just look like a temporary blip within an impressively consistent trend, especially given its rebound after the CPI figures.

Despite assertions to the contrary, a big dollar rally hasn’t necessarily put the brakes on the stock market. The table below shows the S&P 500’s forward returns after each time the trade-weighted dollar rallied at least 10% from its level a year ago.

Three months later, the S&P rose after 9 out of 10 signals, with a good average return and risk/reward ratio. It was a great reason to hit the sell button in 2008 – for a while – but other than that, not so much. 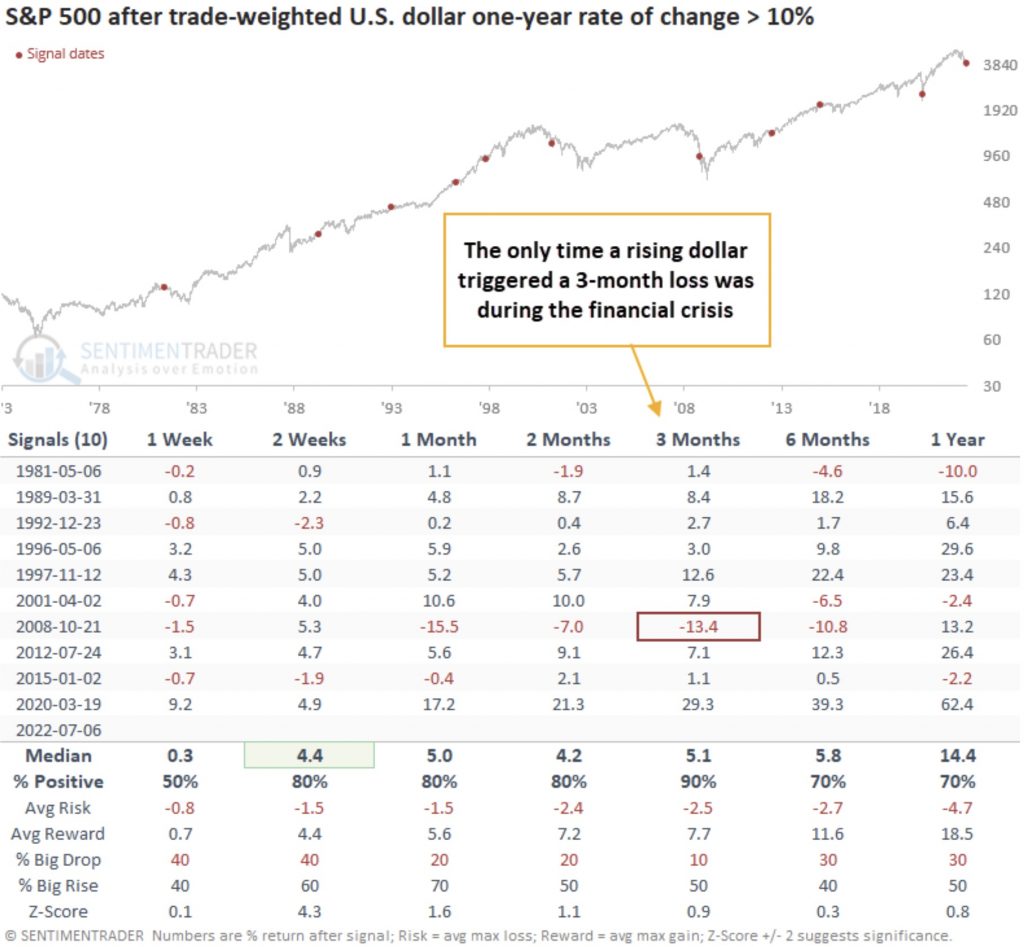 For the dollar and other markets, a big rally is a mixed sign
For the (trade-weighted) dollar itself, it was a mixed signal but mostly positive. Recent signals, 2015 excluded, have been terrible for the buck – a pretty good contrary sign to sell. Before that, though, the dollar continued to rally in the months after a 10% rally. 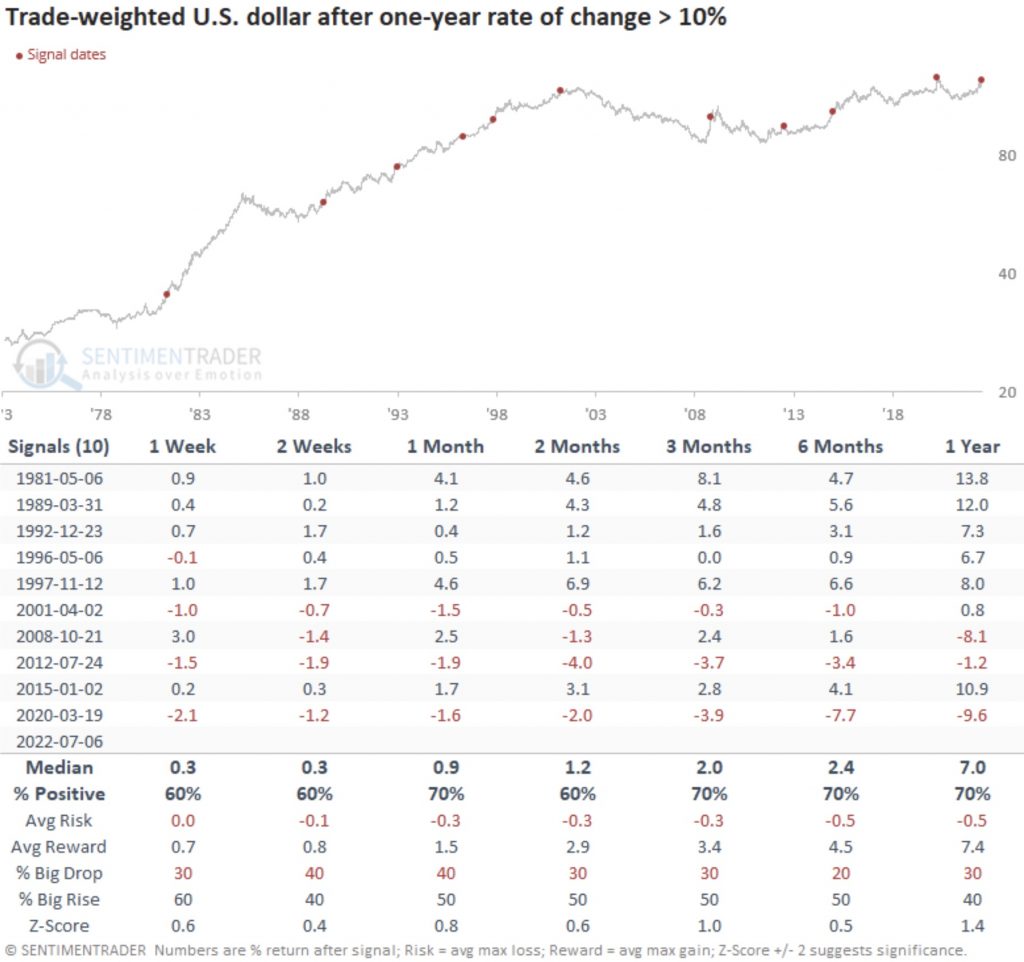 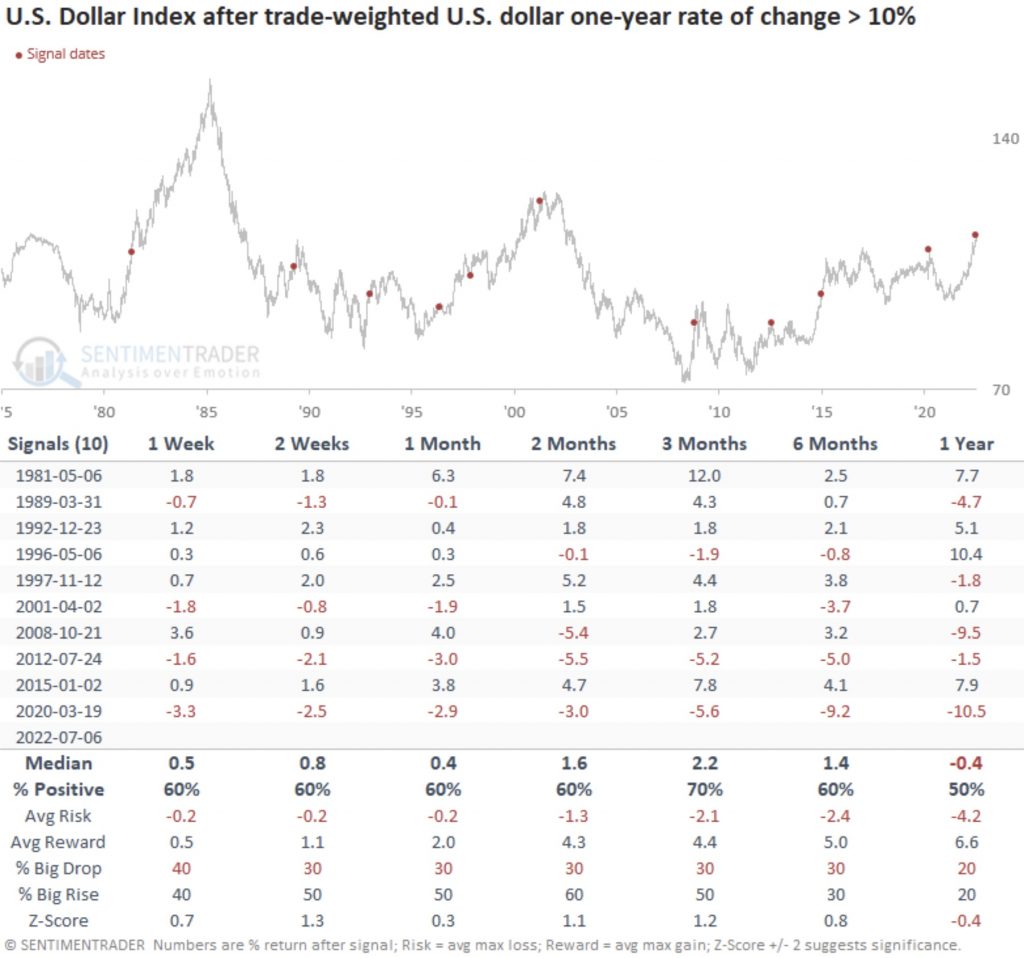 There is a decent inverse correlation between the dollar and gold, so before the past 20 years or so, gold suffered tremendously even after the dollar rallied more than 10%. But since then, the metal has managed to gain, often significantly. 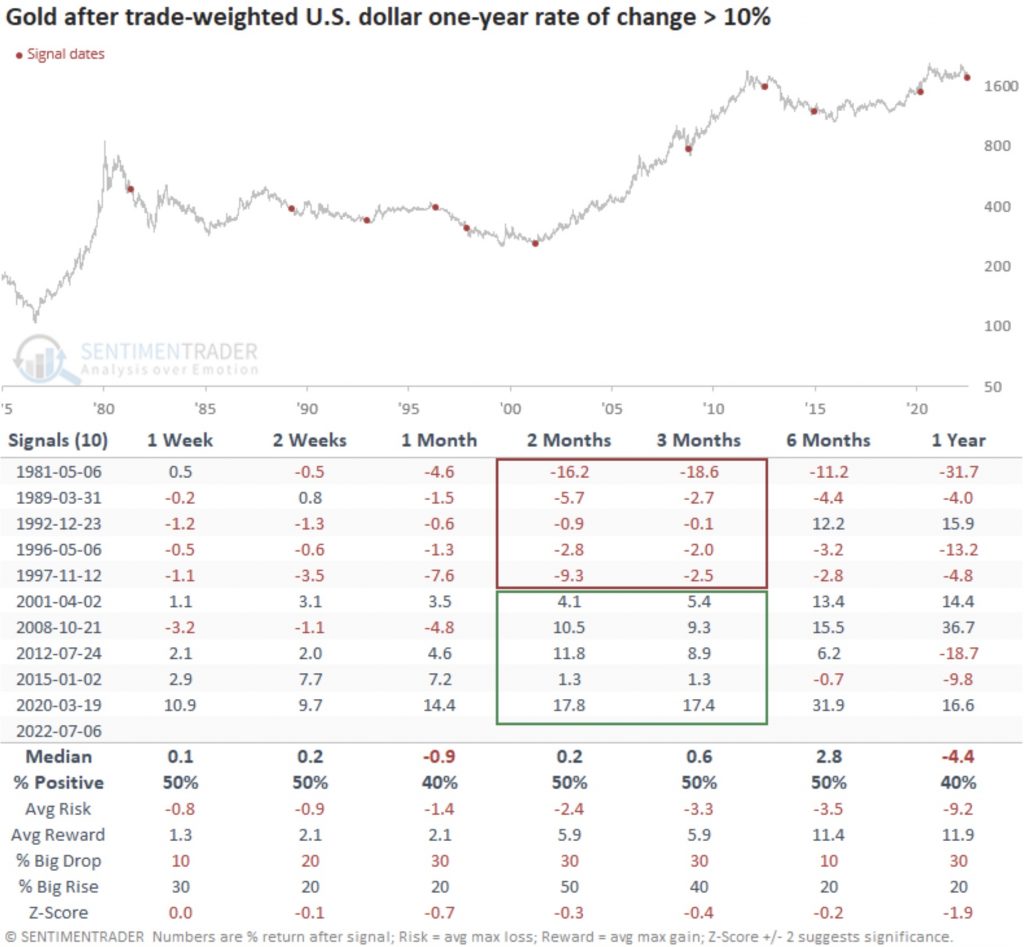 Commodities, in general, were more consistently poor stores of value. Over the next 2-6 months, the Bloomberg Commodity Index suffered losses almost without exception. The biggest, and basically only, exception was the last one that was triggered during the height of the 2020 pandemic fears. 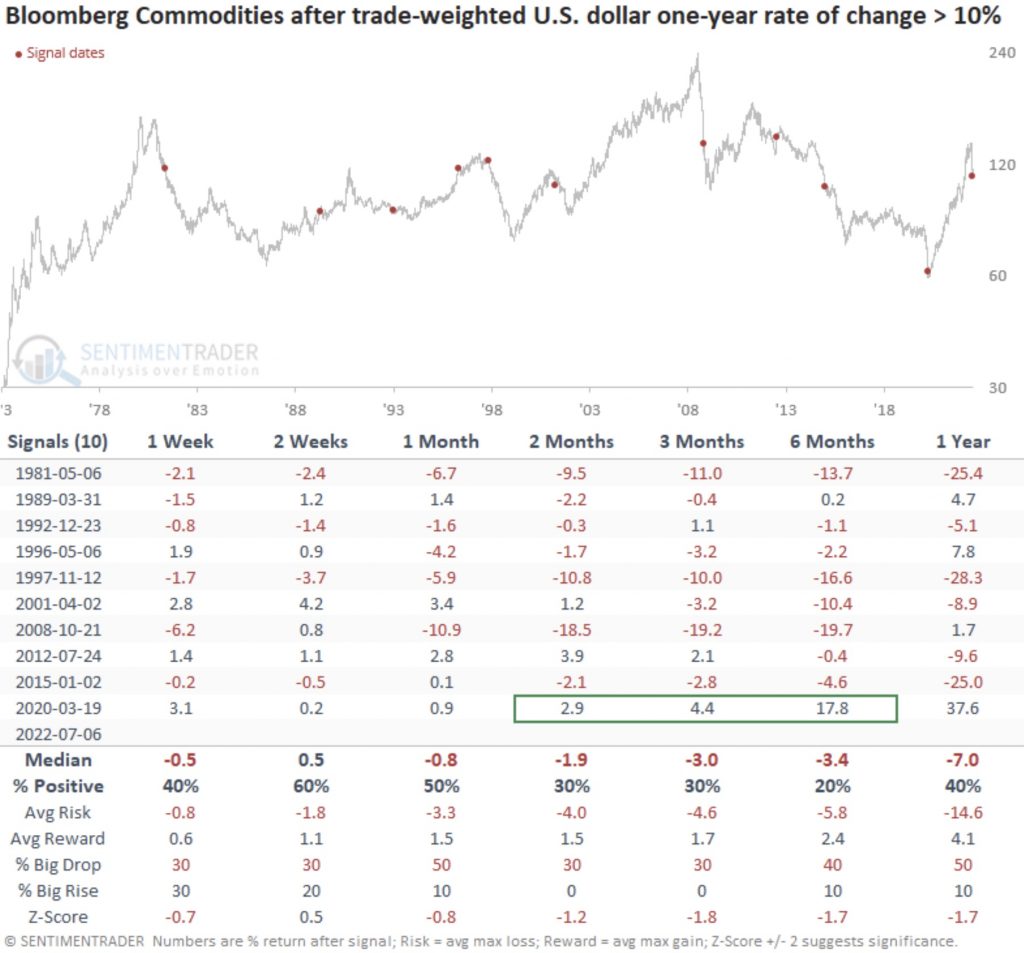 U.S. Treasury bonds showed a decent tendency to rally, with the big caveat that bonds had a mostly one-way trend during almost the entire study period. 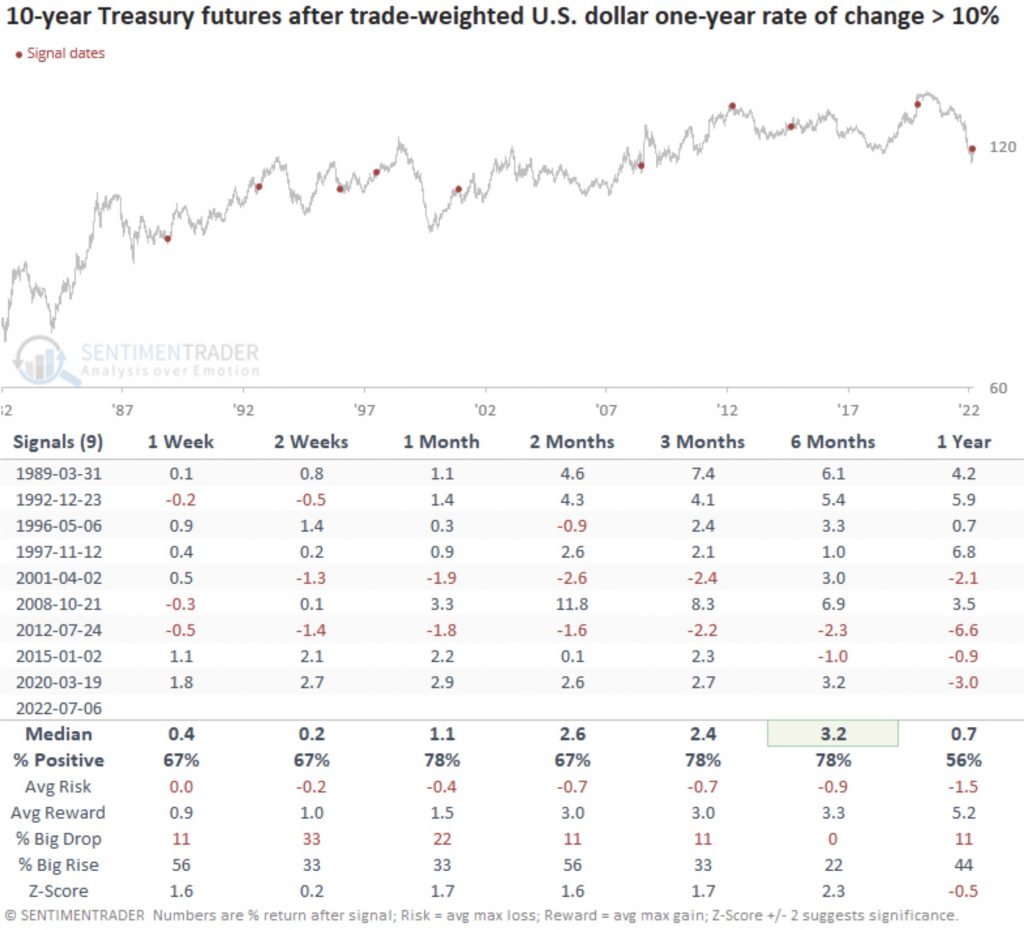 What the research tells us…
Reading opinions from macro analysts or mainstream financial media about what the rising dollar means for company earnings and their stocks, is dizzying. …The reality is that a rising dollar means different things to different stocks, in different sectors, at different times. Sometimes it’s a good thing; other times, it’s bad. Overall, there is no evidence that a 10% or greater rally in the buck from a year ago carries negative implications for a broad index like the S&P 500. The current version of the index heavily weights large technology companies that have extensive overseas earnings, so maybe it’ll be different this time. This is another example of why Jason Goepfert is the best in the world at what he does – providing actionable market data. To subscribe to the internationally acclaimed work Goepfert produces at SentimenTrader CLICK HERE.