On the heels of the announcement that there will be no more China tariffs for now, here is a look at US debt, 3 very important charts and much more.

“National Treasure, National Treasury, National Debt”
February 25 (King World News) – Here are 3 important charts included in today’s note from Jeff Saut, Chief Investment Strategist at Raymond James:  I was traveling last week seeing portfolio managers and doing gigs for our financial advisors and their clients. I have been doing such events for much of the past six months. The recurring question from clients is, “What about the national debt?” First, I would point out that when everyone is asking the same question it is usually the wrong question. Yet, last week that question hit its zenith as the media trumpeted that the national debt had traversed $22 trillion dollars…

With that, I kept getting the same recurring question at events: “Jeff, the debt to GDP is above 100%. Doesn’t that worry you?” My answer has always been:

I don’t think the debt-to-GDP ratio is the right lens to view the debt issue. In a past life I was a fundamental analyst writing stock-specific research on individual companies. When we researched a company we always looked at assets to liabilities. NOBODY looks at America in that way. I don’t know what the Grand Canyon is worth, but it is worth a lot. I don’t know what the Tetons are worth, but they a worth a lot. Now obviously we are not going to sell the Grand Canyon, but the government has many levers to “pull.” A couple of months ago I was driving from San Antonio to the Hill Country to speak at an event. Along the way I drove by an army depot, with nobody there, that had to be 15 miles long. It brought to mind the fact that the government is selling such properties for big bucks. Indeed, the government has many levers it can pull.

Also speaking to this point, our friend, Riverfront Investment Group’s Doug Sandler, in an article titled “National Debt . . . No Time to Worry Yet,” writes this:

In theory, investors should have one less thing to worry about with the passage of the federal spending bill last week, which averted a second government shutdown. However, true to form, investors replaced the fear of too little government spending with new concerns about too much government spending. Given that the bill’s passage coincides with the federal debt surpassing $22 trillion and now exceeding our country’s gross domestic product (GDP), the concern seems justified. In fact, The National Debt Clock personalizes the $22 trillion figure by reminding us that it equates to about $67,000 per US citizen, or roughly $180,000 per US taxpayer.

As scary as the federal debt appears, we are less concerned for two reasons. First, in our opinion, several mitigating factors make the debt load less precarious than what is reported in the headlines. Second, the ‘warning lights’ that would typically flash before a debt crisis remain unlit.

Although it would be highly unlikely, if the U.S. was obligated to put up collateral for its loans, there are plenty of assets it could pledge. A few of the ‘priceless’ assets it controls include prime land (national parks) and buildings, a portfolio of patents, usage rights to digital access, and spectrum and mining rights for energy and minerals.

Lastly and most importantly, the Federal government has the ability to print its own currency, like it did in the years following the Financial Crisis. Since 2008, the Federal government printed over $2 trillion in US dollars and has the ability to print even more. In theory, no country with its debts denominated in its own currency should fail to make good on its debt obligations.

Doug’s conclusion is that warning lights are not flashing. Obviously I agree with Doug, having used the same points as Doug’s 2 and 3. I must admit, however, I have never heard about the intergovernmental debt discussed in point 1, but it is a pretty important point. So, I hope this missive allays concerns about the debt-to-GDP question that I keep getting asked.

Turning to the equity markets, last week the D-J Industrial Average (INDU/26031.81) notched its eighth consecutive weekly gain for the longest weekly upside skein since May 1995. According to our friends at Bespoke:

“Despite lots of economic data weakness both in the US and around the world, earnings have been coming in at a respectably strong pace in the US, and asset markets from Asia to Latin America have been rallying steadily. Whether the explanation is still-cheap valuations, less hawkish central banks, the hopes of positive effects from credit stimulus in China, or possible winding down of trade tensions, there’s plenty of explanations for the ongoing equity rally.”

Meanwhile, the Advance-Decline Line for the S&P 500 continues to trade to new all-time highs and as Leon Tuey points out, “The A/D Line is a much better indicator of the strength of the equity markets than any index.” Other breadth metrics are equally as strong. The eight-week rally has caused AAII’s bullish sentiment to rise to 39.32%, which is not all that extreme. However, bearish sentiment has fallen to 25.39%, which is somewhat extreme. The strong rally continues to leave all of the overbought indicators I follow at extreme overbought levels, as well credit spreads are somewhat elevated vis-a-vis credit, which could be a red flag for stocks in the short term (chart 1 below). 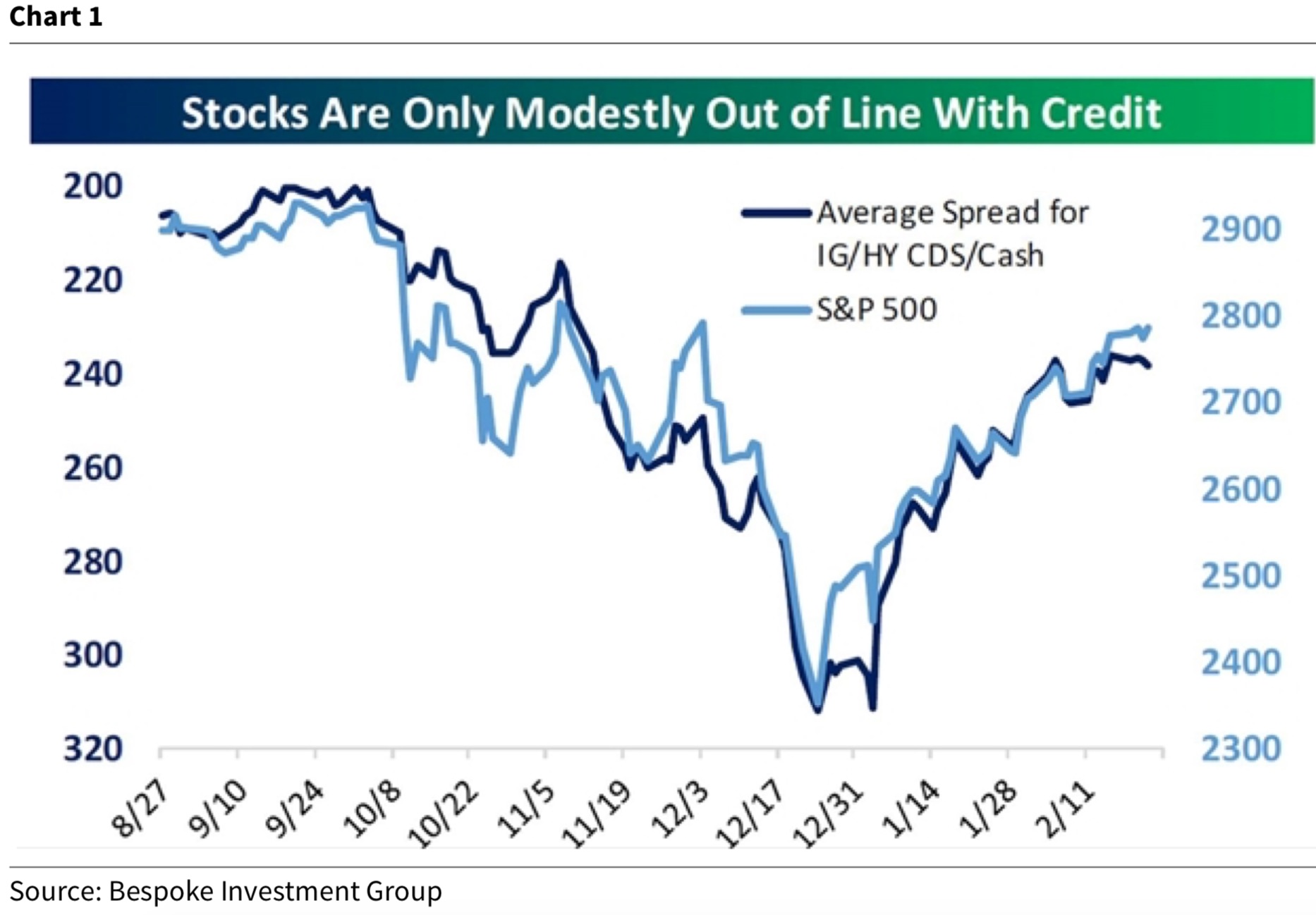 Interestingly, given all the recession talk, Dr. Copper, one of the best economic indicators, has broken out to the upside in the charts (chart 2 below).

Copper Is On A Tear! 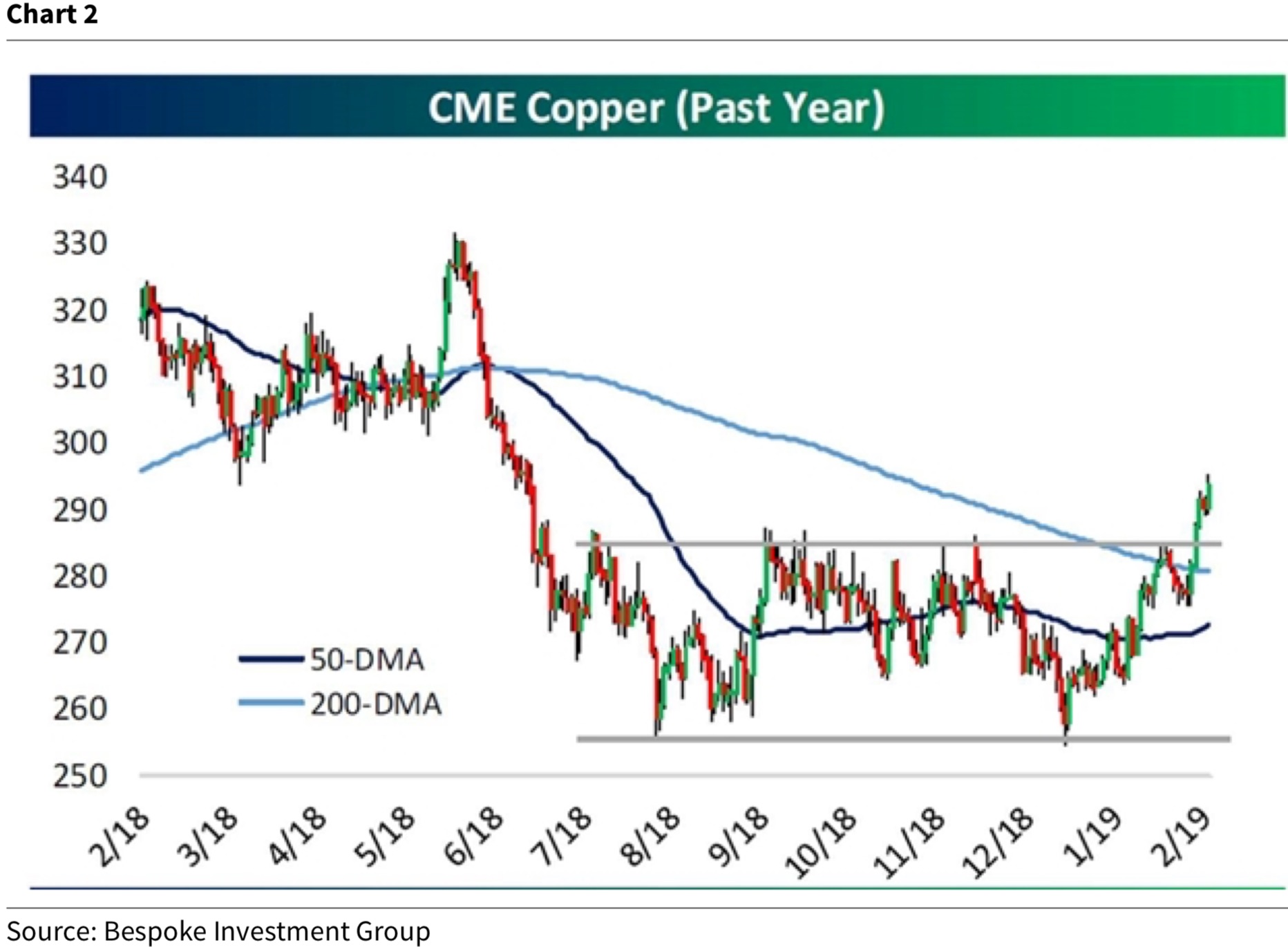 And don’t look now, but crude oil has broken out in the charts to the upside (chart 3); buy the midstream MLPs. 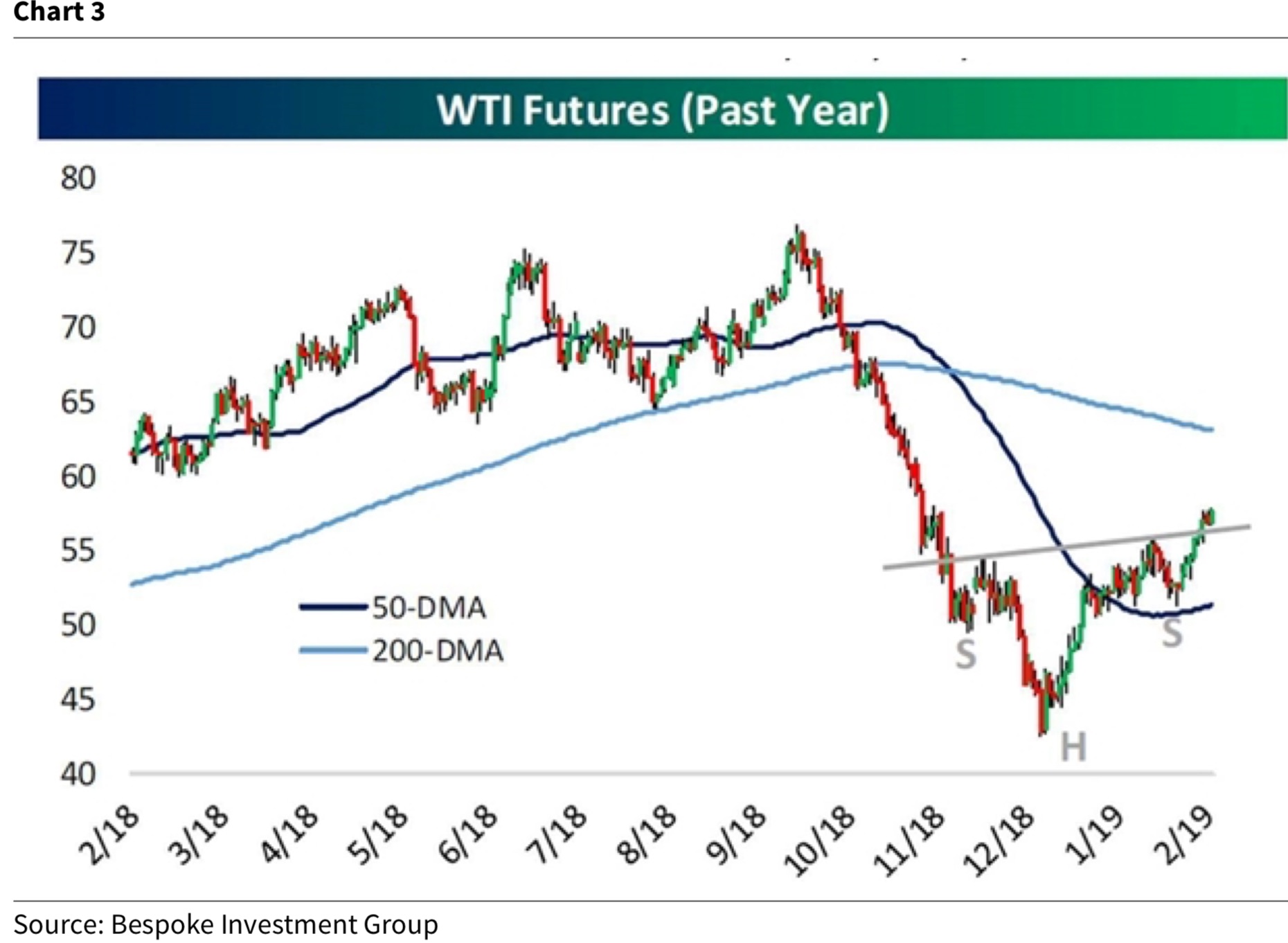 The call for this week: Over the weekend Jim Paulsen said,

“Last year to be successful you had to find a way to stay appropriately cautious in the face of nothing but optimism. This year you must stay bullish in the face of nothing but pessimism on fears of slowing earnings growth, trade wars, and other threats.” Speaking to earnings, so far of companies reporting 4Q18 earnings 63.8% have beaten the estimates, while 60.1% have bettered revenue estimates. That is not as strong as the past four quarters, but it still is not bad. My indicators that were looking for an energy polarity peak have reversed with the mild stall we have seen and currently are configured again to the upside. I did not expect that, but in this business you take what they give you. As one of my mentors used to say, “It is no disgrace to guess wrong, the mistake is to stay wrong!”

My indicators now reflect an upside move without much of a pullback. The pace of the rally should slow, however, following this extraordinary December upside run. This morning the preopening S&P 500 futures are better by some 13 points as I write at 5:17 a.m. because the president has delayed the implementation of further tariffs of Chinese goods.

***Also just released: Greyerz – Alfred’s Adventure In Stocks And When The Real Fireworks In Gold Will Begin CLICK HERE TO READ.