On the heels of another brutal takedown in gold and silver, Michael Oliver, the man who is well known for his deadly accurate forecasts on stocks, bonds, and major markets, communicated to King World News that what is happening now in gold and silver is panic selling.

Panic Selling
August 9 (King World News) – Michael Oliver, Founder of MSA Research:  What’s happening in gold and silver now is panic selling. No doubt about it. Hitting the market at probably one of its least liquid times of the day—“in the dark,” as it were.

After assessing annual momentum, I’m personally going to add to my silver position in this panic. Again, that is my personal situation based on my own risk/reward standards and is not necessarily something others should do. Each investor or manager needs to apply his or her own rules of participation/market engagement in making such decisions. (Read disclaimer at end of this report.)

As explained in the Weekend Report, too many major technical factors argue that a bear in gold now (and silver) is not indicated, predicted, or likely—based on where the annual momentum situations are in those two metals, and also the status of the silver/gold spread (as explained in the Weekend Report, it was in a very comfortable position and not indicative whatsoever of a general decline ahead in net trend).

We update the annual momentum of gold and silver here. 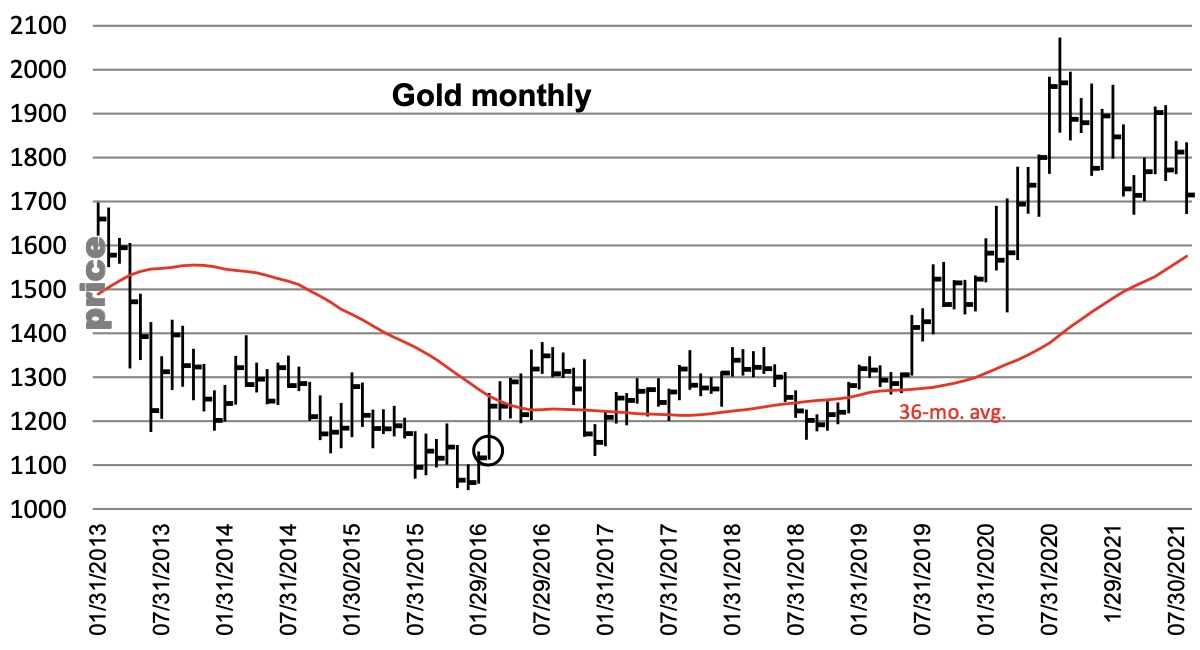 Gold annual momentum
As we’ve noted before, the “structure” on gold’s uptrend is immaturely developed at this point. Meaning it had only comprised two pivotal points during the rise. Current action has dropped to that structure—again, not a mature structure, and hence it could well be support, not a point of “violation.” If that line were already defined by multiple lows along it—i.e. three or four, not two— then we’d be concerned about its validity as a potential negative structure if broken. But it’s not mature.

Silver annual momentum
Silver’s annual momentum has no uptrend line or well defined floor below it that’s being broken or even threatened. In fact, there are no such structures below in evidence!

Instead, this is a first pullback by annual momentum that has visited its prior breakout level of last summer (speaking of annual momentum, not price, which was $19.48 at the point of the momentum breakout). And it took the bears thirteen months to get that pullback. And meanwhile price is still inside the range it has had since last summer’s high. (Low of that price range was last September at $21.73.) 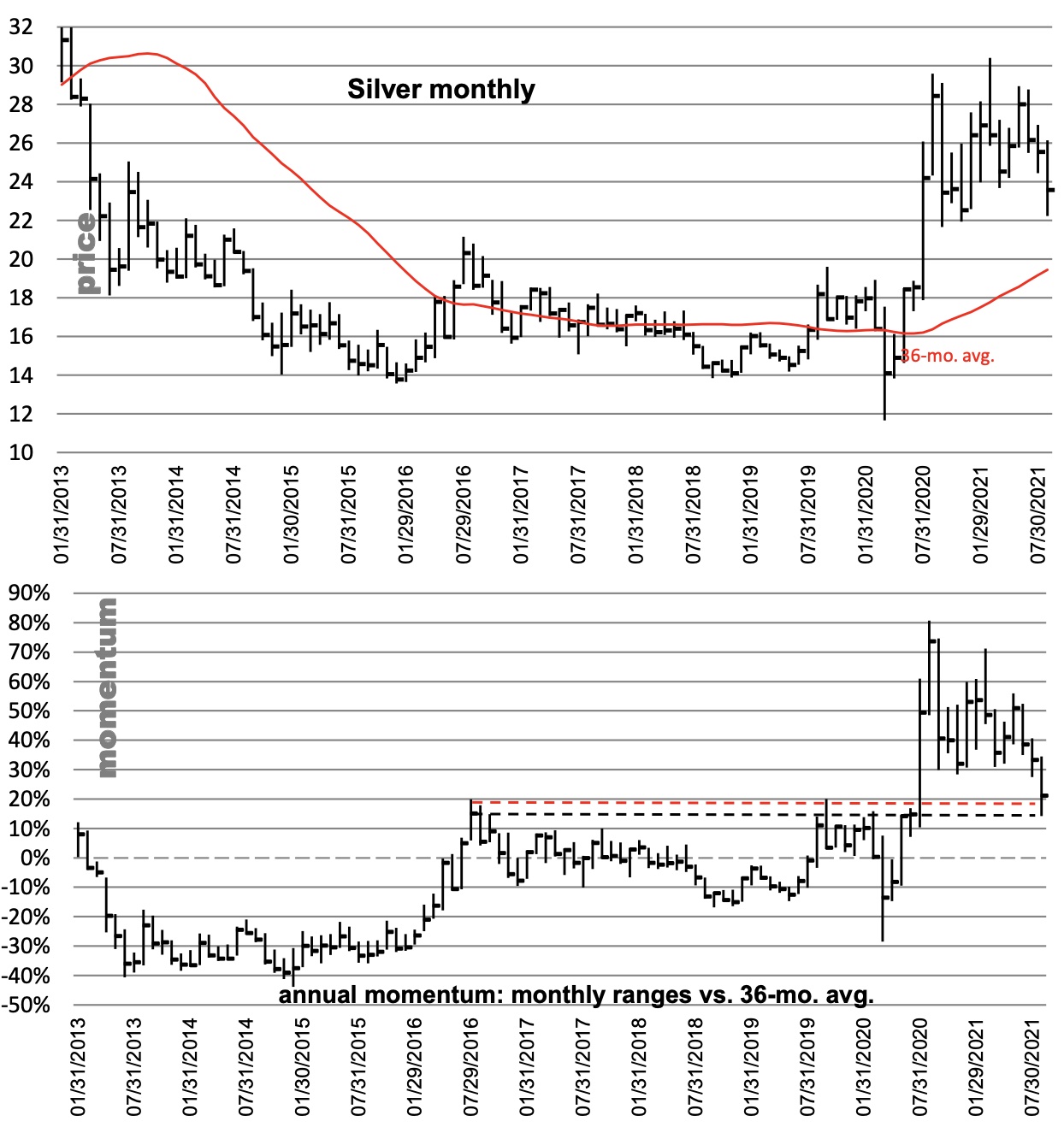 Wild Trading
Peter Boockvar:  It was a wild Sunday night in the precious metals markets, or we can just call it another flash crash. Someone around 7pm est last night decided to puke gold down to $1678.

The trade with gold and silver is pretty straight forward here. If you believe the Fed will get ahead of the curve or at least in line with it with regards to inflation, then sell. If you think the Fed will crab walk their tightening, then this selloff is a gift. I believe in the latter.

Just a reminder, when Greenspan was lifting rates off 1% on towards 5.25% in the mid 2000’s, the price of gold doubled. When Yellen started raising rates in December 2015 after 7 years at zero, gold bottomed. I know we are not debating rate hikes now, but rather the timing and pace of tapering but you get the point.

Now for some good news…

Fosterville South Hits High-Grade Gold
Fosterville South, the cashed-up explorer that attracted much attention at IPO by announcing investments from famous industry investors such as Eric Sprott, has now delivered what everybody watching the situation has been waiting for – a high-grade gold hit in an area of their vast holdings that has been the subject of no historic drilling.

Drill Hole RWR13 at Reedy Creek, which is part of Fosterville South’s Providence Project, hit 11m at 31.34 g/t Gold including 4m at 80.05 g/t Gold. The particular area of the goldfield where Fosterville South has now drilled this big hole had seen no previous drilling.

The Set Up To Today’s Drilling Success
Fosterville South has the premier exploration land package in Victoria, Australia which is a region of the world well known in gold mining circles due to the success of Kirkland Lake Gold’s Fosterville Mine which has been the world’s highest-grade and lowest cost gold mine. The 4,000 square km Fosterville South holdings of exploration tenements and tenement applications was assembled over a multi-year period. This land acquisition process commenced long before the modern-day gold rush taking place today in Victoria and as first movers in this region, Fosterville South was able to put together a multitude of strong prospects. Today’s ultra high-grade gold hit in a previously undrilled area of the Reedy Creek Goldfield has already proven the benefit of being early.

Wealth Creation Via Exploration
With approximately $25 million in cash, no debt and a drill program ramping up based on today’s amazing start at Reedy Creek – the future looks bright for Fosterville South shareholders. Fosterville South CEO, Bryan Slusarchuk notes: “I’ve been blessed to be involved in discovery before with K92 Mining and have seen the wealth it can create for the speculators and investors involved early. There are big risks in the exploration business but when we take a big risk, we want to know the size of the potential prize is exceptionally significant. High grade gold in Victoria fits that bill and I’m looking forward to seeing the program Rex is running at Reedy Creek and on the various other projects evolve.” Fosterville South, symbol FSXLF in the US and FSX in Canada.

To listen to one of the most important interviews of 2021 with Michael Oliver discussing gold, silver, and mining stocks CICK HERE OR ON THE IMAGE BELOW.

Buckle Up For The Most Severe Economic Downturn In History