With the Dow hitting a new all-time high along with the Nasdaq, we have extreme stock market bullishness, record shorts in the VIX and QE going in reverse. Interesting times. Plus a surprising look at what is happening with inflation…

Metals Hitting Multi-Year Highs
By Peter Boockvar, author of the Boock Report
October 16 (King World News) – Here is what Peter Boockvar wrote as the world awaits the next round of monetary madness: Just as central bankers in DC over the past week mused over the mystery of inflation, commodity prices continue higher. Copper is ripping up by more than 2% to a 3 year high and up for a 6th straight day. Nickel prices are higher for a 7th straight day. Palladium is trading at a 16 year high. Also rallying is tin, aluminum, lead, platinum and silver…

This move comes after China reported a 6.9% y/o/y rise in PPI in September, above the estimate of up 6.4% and vs 6.3% in August. As for the factors, it’s partly demand but also the perception that supply continues to get cut. Outside of China over the past two years there has been a sharp decline in mining investment while in China it’s difficult to gauge what the net result is of their cuts in capacity because many times it is offset by new, more updated production. It seems that inefficient and old capacity in China is what is getting cut, in part to the government mandate on cutting pollution. Bottom line, inflation is not dead.

Everyone Loves Stocks
I don’t want to hear anymore that this is a hated bull market. In Friday’s UoM consumer confidence number, the number of respondents that think the stock market will be up in the next 12 months hit a record in this 15 yr question. See chart and notice the previous peaks in June ’15 and July ‘07. 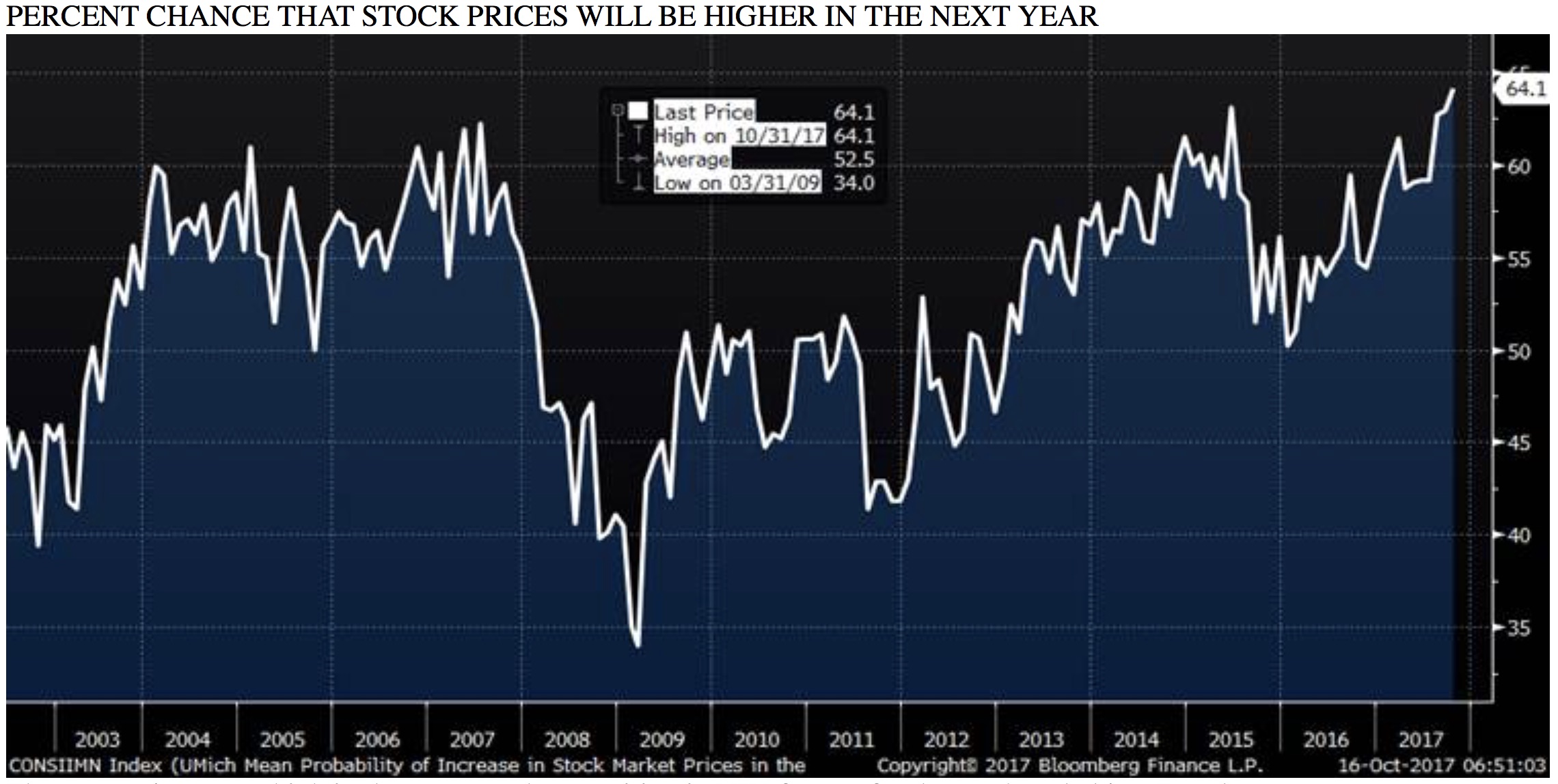 There was also a new high in the net spec short position in VIX futures for the week ended last Tuesday.

Liquidity Spigot Slowing Down
We keep getting trial balloons floated from unnamed ECB officials ahead of next week’s meeting on how they will end QE next year. The new one from Bloomberg news basically says officials acknowledge they are running out of things to buy under the current capital key criteria and that they only have room to buy about 200b more of bonds as of January. Assuming they want to stretch it out to September, that means cutting monthly purchases to about 20-25b euros from the current run rate of 60b. If the case, on an annualized run rate we are talking about 500b euros of less buying. AGAIN, the liquidity spigot is slowing down.

Just as Fed members tried to calm markets down ahead of QT in telling us it won’t be a big deal (I say just you wait), the head of the French central bank Francois Villeroy is trying to do the same. Yesterday he said “No one should fear a further reduction in the intensity of our monthly net asset purchases, and their possible end thereafter, insofar as we will maintain a very accommodative monetary policy, to be judged on all its instruments.” Start again the flow vs stock debate. Central bankers believe in the latter, market participants firmly have faith in the former as do I.

So we have extreme stock market bullishness, record shorts in the VIX and QE going in reverse. Interesting times.

***KWN has now released the remarkable audio interview with the man who counsels the biggest money on the planet, Michael Belkin, discussing world markets, the dollar, bonds, gold, silver and the fortunes to be made investing in mining shares CLICK HERE OR ON THE IMAGE BELOW.

Here Are The Big Surprises In Chaotic Global Markets