Look at who just warned $20,000-$50,000 gold is coming as global financial system may see crashes in everything expect gold.

A New Global Monetary System
October 10 (King World News) – Dr. Stephen Leeb:  If, as I believe, a new monetary system – multinational and backed by gold – lies ahead, should Americans panic? Far from it. Rather than dooming us, it is likely to prove our savior.

When the U.S. ditched the gold standard in 1971 and the dollar still retained its position as the world’s primary reserve currency, it may have seemed as if we could have it all. But there was a big problem: We lost any incentive for monetary discipline, by which I mean focusing on productivity gains to fuel most growth. Being forced to focus on productivity gains incentivizes an economy to make farsighted investments, as opposed to the wanton shortsighted spending we pursued instead.

Fracking is a depressing example. About a decade ago I was working with a leading quant from a major bank on a side project that aimed to apply cutting-edge mathematical research to the stock market. The basic idea was to identify better ways of grouping stocks together for trading purposes. One provocative finding – whose full import I didn’t realize until recently – was that fracking stocks related more closely to bank stocks than to oil companies.

In other words, fracking relied more on the largesse of banks willing to finance it than on geology. And not surprisingly, fracking, despite anything you might have heard, has been a disaster. Since inception the industry has been cash-flow negative. Moreover, it has wasted enormous resources that could have gone to accelerating our development of renewable energies. When you add up all the costs including opportunity costs, fracking has likely had losses of more than $1 trillion…

Fracking also has created massive collateral damage, and specifically to oil service companies, which likely have fared even worse than the companies they serve. Schlumberger, by far the king of the oil service industry, has emerged from the past decade a shadow of its former self. Its market cap has shrunk by over 60%, debt has nearly doubled, and perhaps most important, capital expenditures have shrunk by over 75% from their high-water mark in 2012.

This horrific showing came with North American operations representing about 30% of total operations and profitable international operations, 70%. The butchering of the oil and gas service sector has meant that fracking has dented the potential of increasing fossil fuel production, which as I discussed in my last interview will be critical in obtaining enough energy to take us through the transition to a world powered by renewables. The extra oil and gas used up because of fracking has mostly erased tight shale formations as the proverbial rainy-day fund, a fairly long-term albeit expensive source of energy that could have been prioritized in case of an existential emergency in which energy and other resources grow increasingly scarce.

But with the dollar as the reserve currency, the broad-based losses from fracking have barely been noticed here, and indeed were enabled by the Fed and commercial banks. Fracking illustrates why we’d actually benefit from a multinational reserve currency that would prevent spending that jeopardizes our future. Ironically, it’s likely that the U.S., in wasting so many opportunities for the sake of short-term gains, has lost more from the dollar’s dominant international role than the countries that complain about our capricious use of sanctions.

Speaking of sanctions, take a look at the following chart that is a 12-month snapshot of three natural gas companies along with natural gas prices. 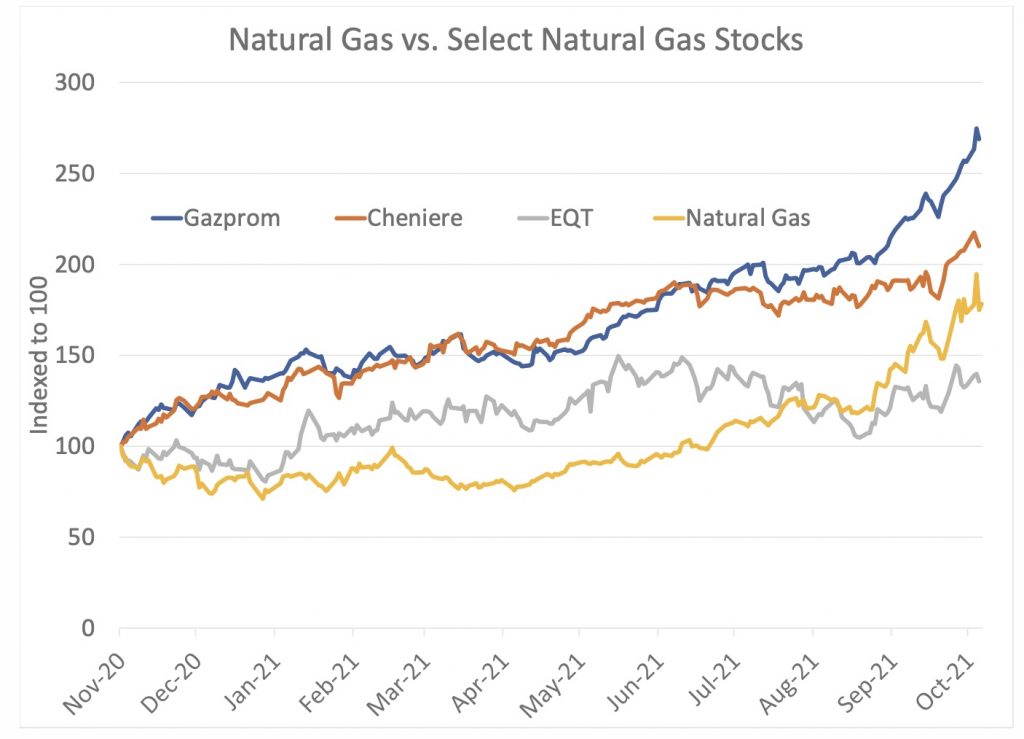 The worst performer is EQT, one of the survivors of the fracking debacle and currently the largest U.S. producer of natural gas. The other U.S. company is Cheniere Energy, which does not drill for natural gas but thrives on the losses and low profits of those that do. Cheniere liquifies natural gas and exports it to other nations, and I included it because I wanted to be fair and show how some American fossil fuel companies have managed to capitalize on the recent price gains. But as the chart shows, the biggest winner is Russia’s Gazprom, which despite all the risks associated with the Russian stock market has soared. Gazprom, the largest natural gas producer in the world and one of Russia’s most important companies, shows that any damage to Russia’s economy from sanctions has been made up for by our shortsighted economic policies (which now include, as I discussed in my last interview, the focus on climate change rather than resource scarcities as the true existential threat).

$20,000-$50,000 Gold
Given the world’s precarious state, gold reaching $20,000, or even $50,000 in the foreseeable future is far from a fantasy. In the decade after we abandoned the gold standard, gold climbed from an admittedly depressed $35 to $800, a 23-fold gain and an annualized rate of over 30% a year. That rise came from a politically motivated energy shock, which gave birth to the petrodollar. The key word is political. Today, in contrast to the 1970s, we face real and growing scarcities in almost all the commodities and materials our civilization needs to function.

In other words, conditions today are far worse than in the 1970s, both because of actual physical scarcities and because we barely recognize the problem. The fracking boondoggle is just one example of how we’re in denial. The focus on climate change rather than resource scarcities is another. And our self-delusion risks making an existential problem that much harder to overcome.

Nature and other science journals report endlessly on the risks of climate change. But they’ve ignored the book I referred to last interview, Steven Koonin’s Unsettled, which simply points out that scientists don’t know enough to make accurate predictions about the impact of climate change or our ability to cope with it. I’ll just note again that Koonin’s source for the data he presents indicating climate change likely will be less devastating than is now widely believed is the U.N. – the same organization that shared the 2007 Nobel Peace prize with Al Gore for alerting the world to the dangers of climate change.

Putting resource scarcities on the front burner is essential. If writing or talking about it doesn’t do the trick, the effects of our full-out press against carbon may do so. Power outages, a lack of heat, rising food prices, rising prices for solar energy and other renewables, and even chip shortages already are giving the West pause.

I was heartened by the absence of any Western criticism of China when it decided to reverse gears on coal. The Chinese government has ordered coalminers and national banks government to fund and produce as much coal as possible. Despite rocketing prices for this dirtiest fossil fuel, it remains the cheapest fossil fuel by a considerable margin. The West’s lack of reaction, plus the planned virtual meeting between Xi and Biden, give me hope that we may be making progress both in recognizing the real problem and in cooperating with China despite our many differences. Getting to a better more sustainable world can only happen if we realize it will take cooperation among all major economies.

Gold Will Play A Major Role In New Global Monetary System
I hope that one item on the agenda will be a new monetary system that can enforce discipline in the allocation of resources – which means a system in which gold plays a major role. I’m confident that China is headed in that direction along with most of the developing world, representing 80% of the world’s population. Will the West follow?  I am hopeful but no guarantees.

Gold investors will win either way. If, as I hope, the world’s major economies come together to tackle the existential crisis of resources scarcities, it will mean sharply higher commodities and mind-blowing gold prices. As always there will be corrections, but if you stay on the right side of assets, and especially gold, your gains will be enormous, even as the major stock market averages post negative real gains as in the 1970s, but worse.

Catastrophic Crashes In Everything Except Gold?
And if the West persists in denying reality? In that case we could see catastrophic crashes in everything except for gold. It could mean unmatched deflation, and in terms of purchasing power, gold’s outperformance might be even greater than in the good case – though under those circumstances, the world might not seem worth inhabiting. But best-case scenario, worst-case scenario, you still want to own all the gold you can manage. 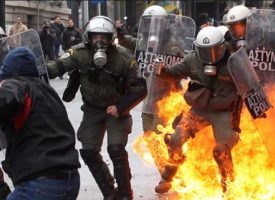