5 Of The Most Shocking Charts Of 2020 Were Just Released!

On the heels of dramatically increased chaos and volatility, 5 of the most shocking charts of 2020 were just released!

Investors Hoarding All-Time Record Cash Levels
May 1 (King World News) – Jason Goepfert at SentimenTrader:  Investors have been shoving money into the safety of money markets on a scale never before seen. In March alone, they moved nearly $700 billion into these funds, more than four times any prior monthly inflow. (See below). 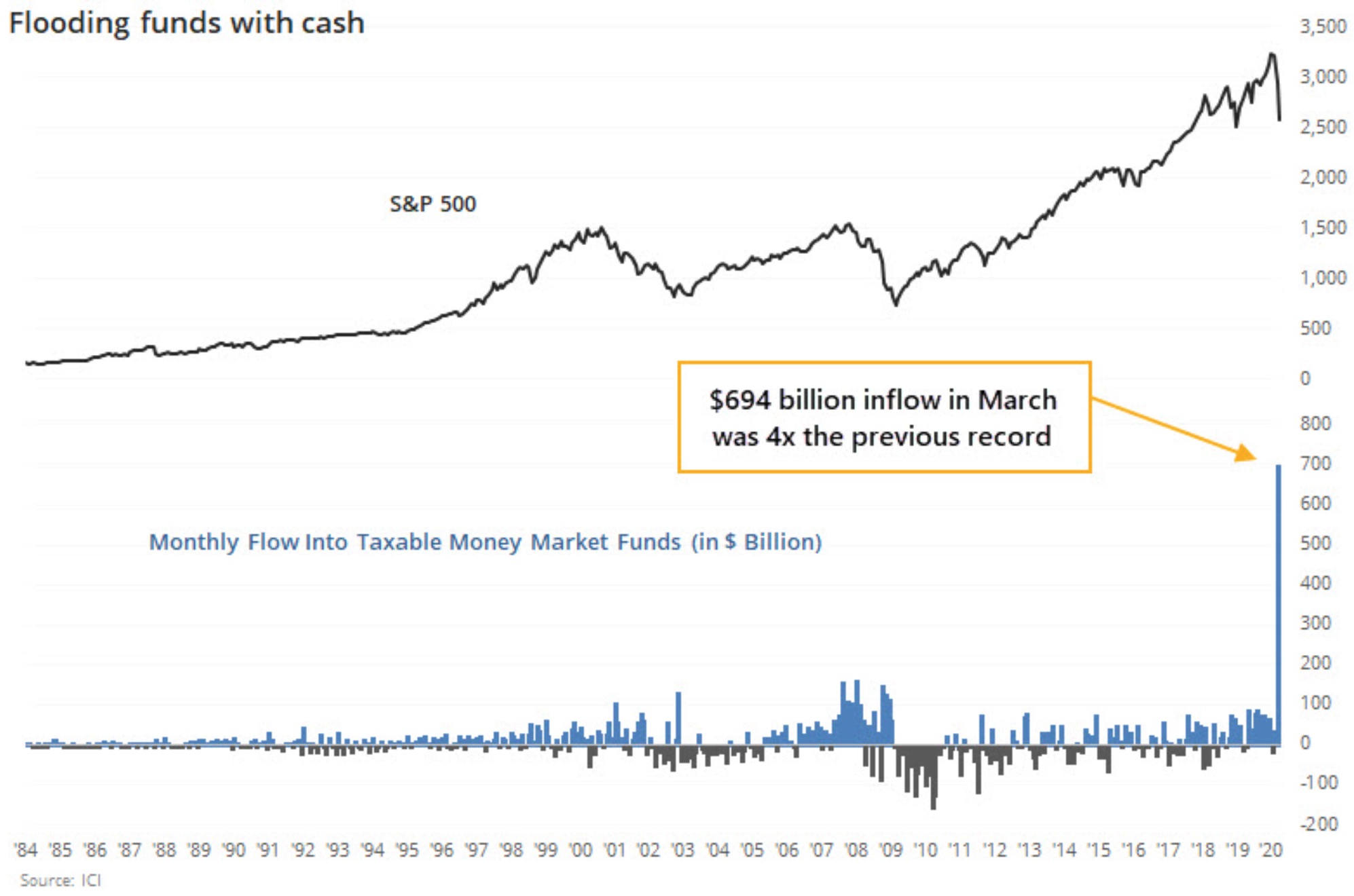 As a percentage of the asset base, the jump in March was still by far the most in 35 years. (See below). 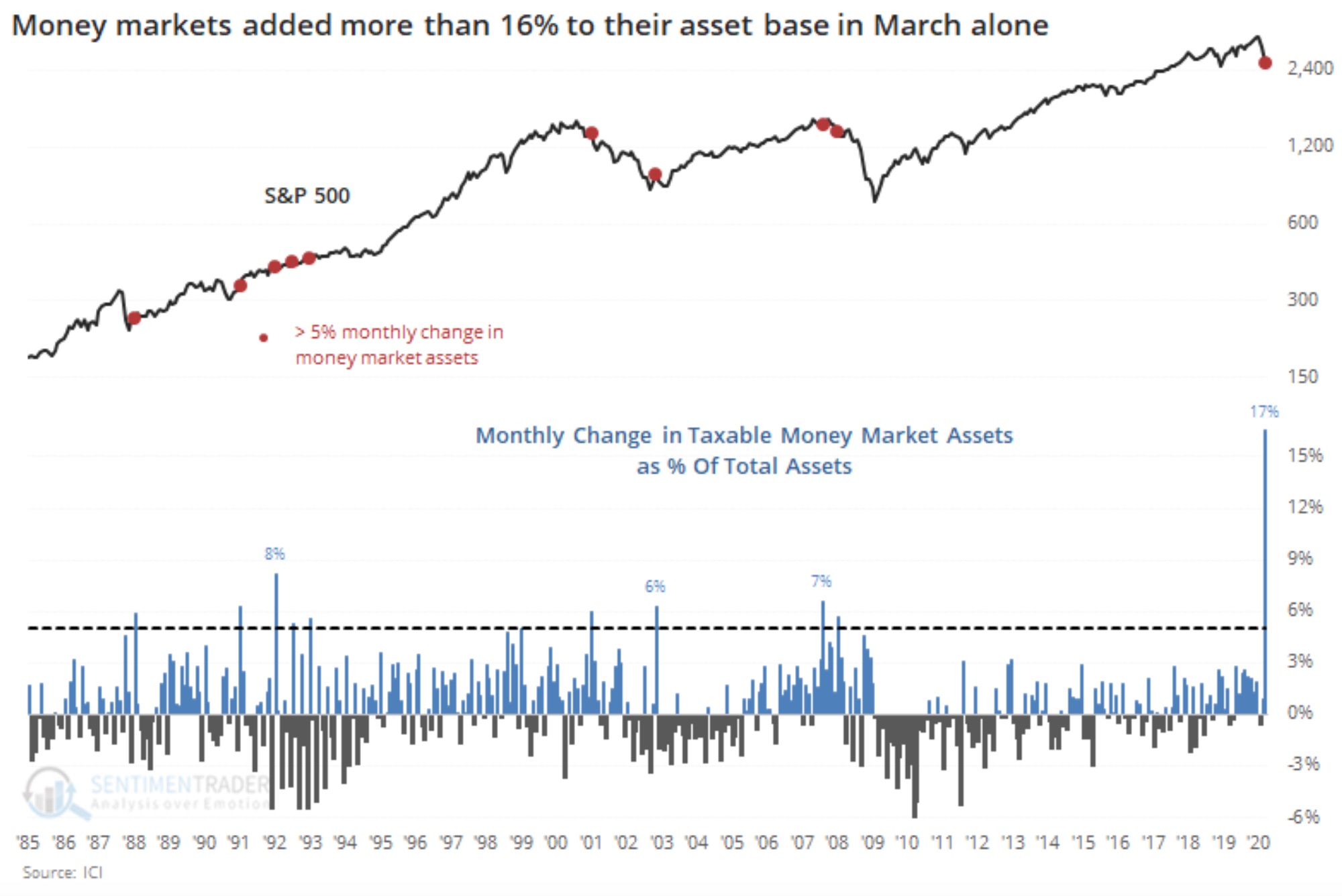 The record of these flows is not consistent as a predictor. It led to universally higher prices prior to the last two bear markets, when it was woefully early.

It’s not just mom-and-pop investors. Institutions have been flooding money market funds, and mutual fund managers have raised the proportion of liquid assets in their funds. At 3.1% of total assets, it remains well below other periods of panic, even though the rate of change has been dramatic. (See below).

Mutual Fund Cash Balances Spiking As A % Of Assets! 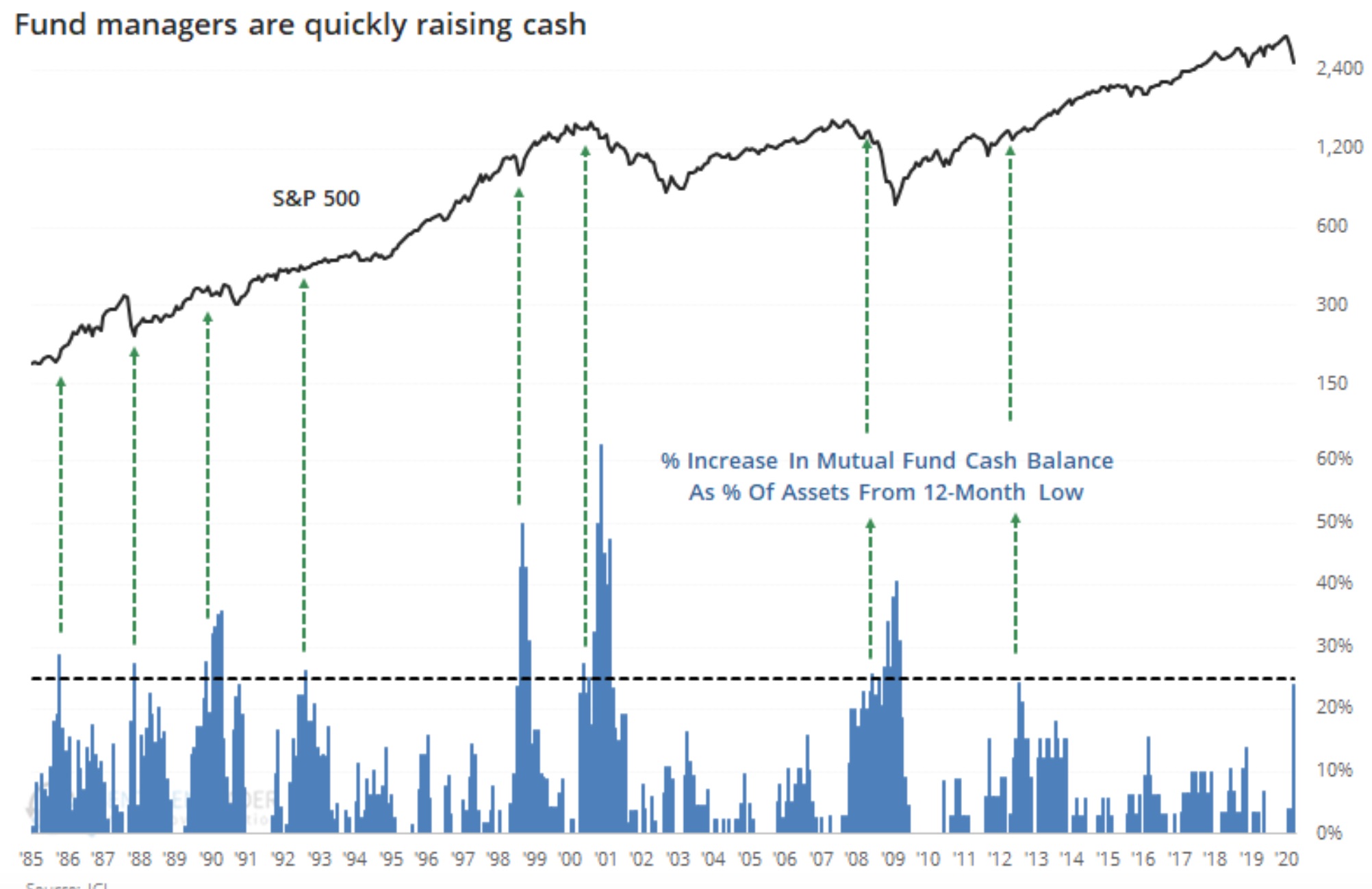 As a result of the plunge in equity assets and major inflow to money market funds, the ratio of assets in equities versus money markets has cratered to the lowest since 2012. (See below). 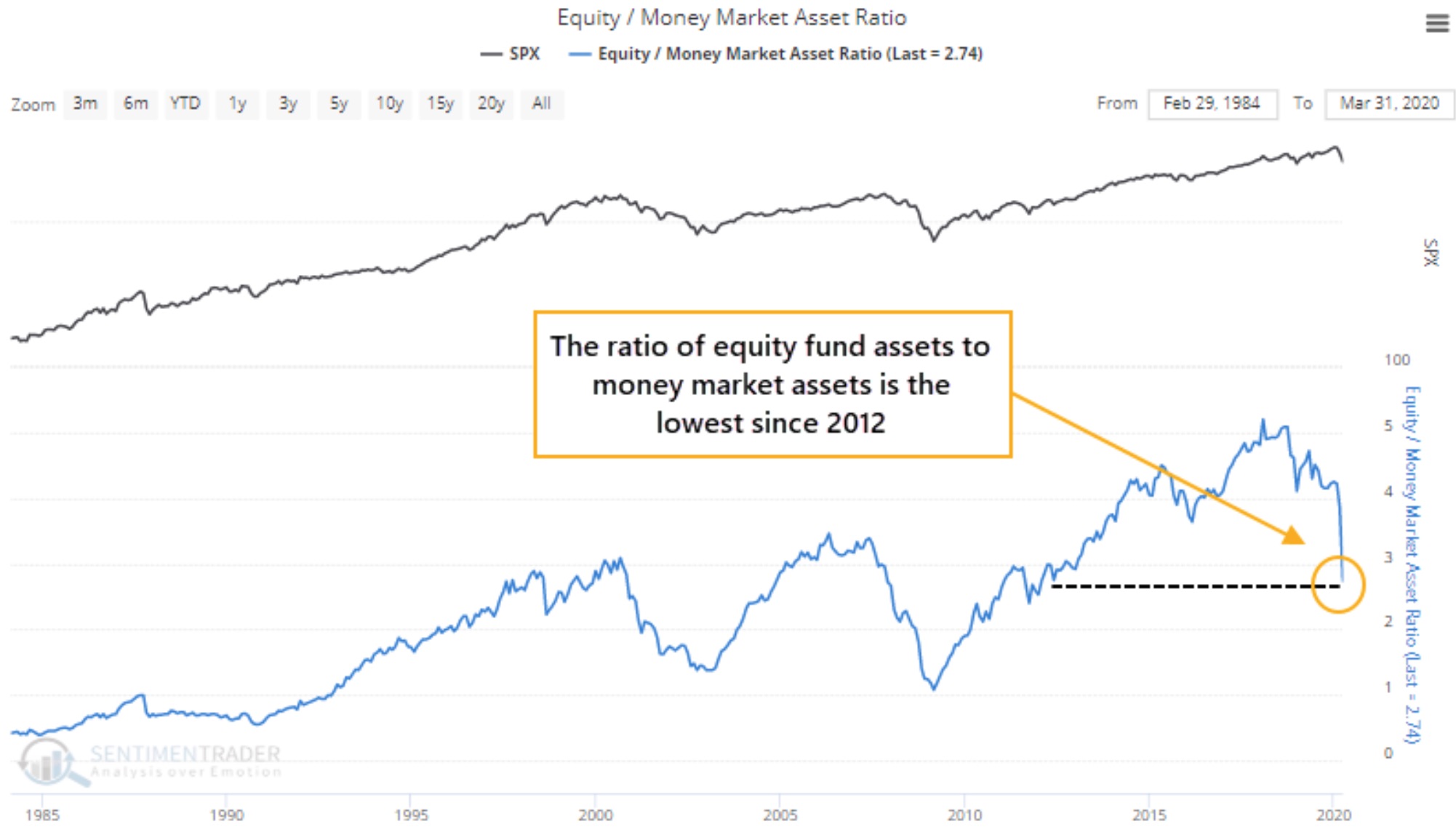 The percentage change in this ratio is dramatic, falling more than 40% from the peak. That’s on par with the largest declines in 35 years. (See below). 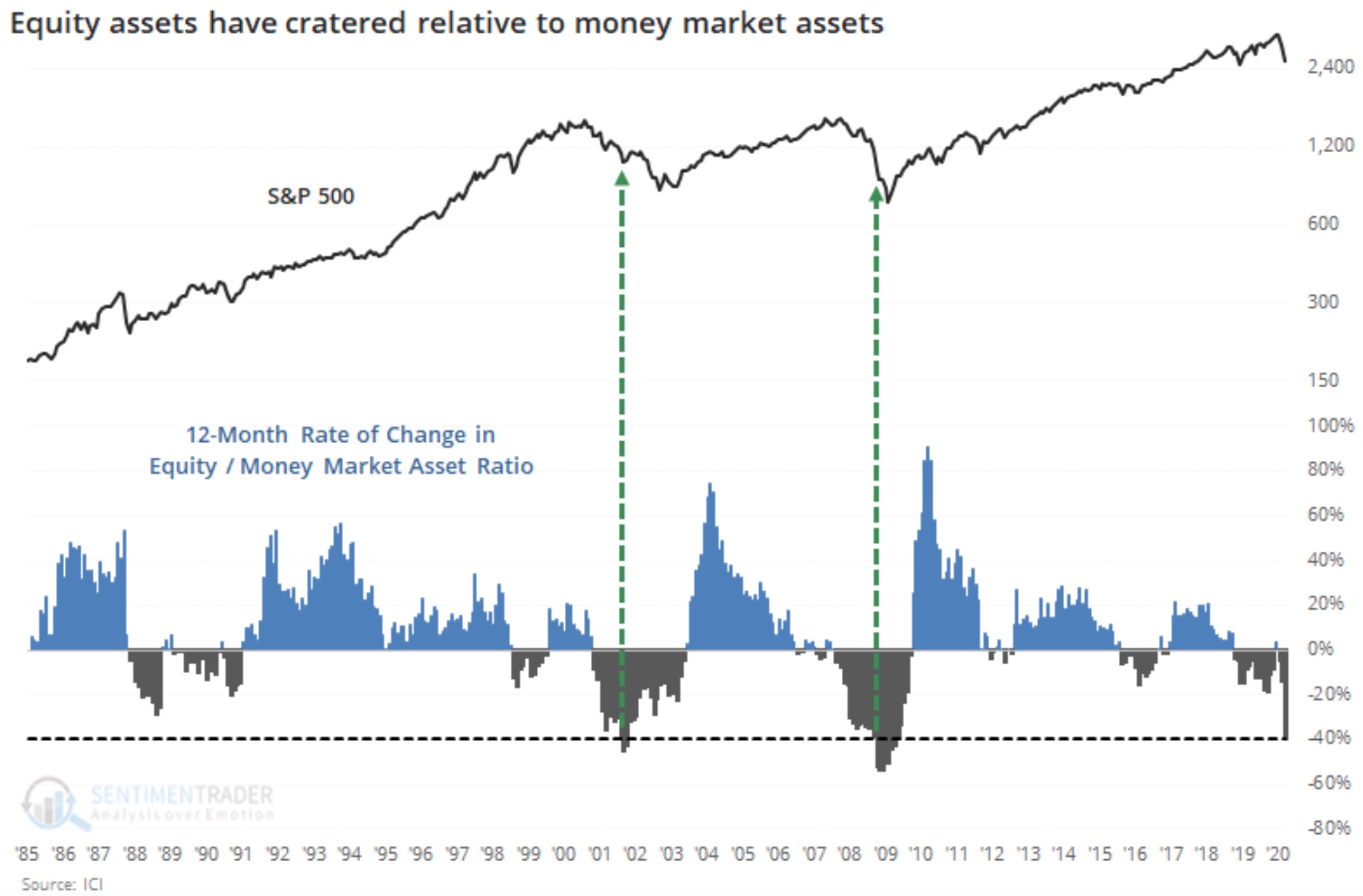 Just because the drop in the ratio has been historical doesn’t necessarily mean it’s a positive, at least right away. Both of the other times it declined by this month, stocks still had further to fall in the months ahead before finding a long-term bottom.

Most of the fundamental data points, and fiscal and monetary policy adjustments, are beyond what we saw near the ends of past bear markets. This decline happened so fast, though, that many investors are just catching up. So when we look at data like fund flows, especially those released with a lag, we’re only seeing the kind of activity that previously triggered near the beginning of past bear markets. Based on this data in isolation, it’s extreme, but not actionable. It would take more months of heavy outflows from stocks and inflows to money markets to equate to the kinds of readings we more commonly saw at or near the ends of other bear markets, especially the last two. …To subscribe to the internationally acclaimed work that Jason Goepfert produces at SentimenTrader CLICK HERE.