Look At What Is Happening Underneath The Violent Trading In Markets

Look at what is happening underneath the violent trading in markets.

Sentiment
October 31 (King World News) – Here is a portion of what Peter Boockvar wrote today as the world awaits the next round of monetary madness:  From a contrarian sentiment standpoint, the bulls got what they wanted as II said Bulls fell to 44.3 from 50.5 last week. Bears rose .8 pts to 19.8 while those expecting a Correction was higher by 5.4 pts to a 5 month high of 35.9. The bull/bear spread of 24.5 is down to the lowest since early May. This follows Monday’s close in the CNN Fear/Greed at the recent low of 5. I do emphasize though that these are short term indicators only but is a good set up for a near term oversold rally…

Mortgage Rates & Applications
With the average 30 yr mortgage rate holding at a 7 1/2 year high of 5.11%, mortgage applications weakened further. Purchase applications dropped by 1.5% w/o/w and are now down a touch y/o/y, by .4%. Refi’s fell by 3.8% w/o/w and are down 32% y/o/y. We know weakening affordability has been the overriding factor for the reason that the rate of housing transactions has slowed.

US Economy Adds Jobs
ADP said the US economy added a net 227k private sector jobs in October. That was 40k more than expected while September was revised down by 12k to 218k. The goods producing sector added 38k of the jobs with the service side contributing the balance of 189k which is the most since January. Within services, the big upside came from the ‘trade/transportation/utilities’ areas as the 61k jobs added here is the biggest one month gain since June 2014. Maybe trucking companies are having some success in adding workers? Manufacturing added 17k jobs as did construction.

“The job market bounced back strongly last month despite being hit by back to back hurricanes.”

The gains also were wide spread in terms of industries. Also,

“The only blemish is the struggles small businesses are having filling open job positions.”

… The Q3 Employment Cost Index, the preferred measure of labor costs, rose .8% q/o/q, one tenth more than expected. An .8% gain was also seen for private sector wages and salaries. Importantly is the 3.1% y/o/y growth rate in wages/salaries for private sector workers which is the best since Q1 2008 (see chart below).

Wage Growth Highest In More Than A Decade 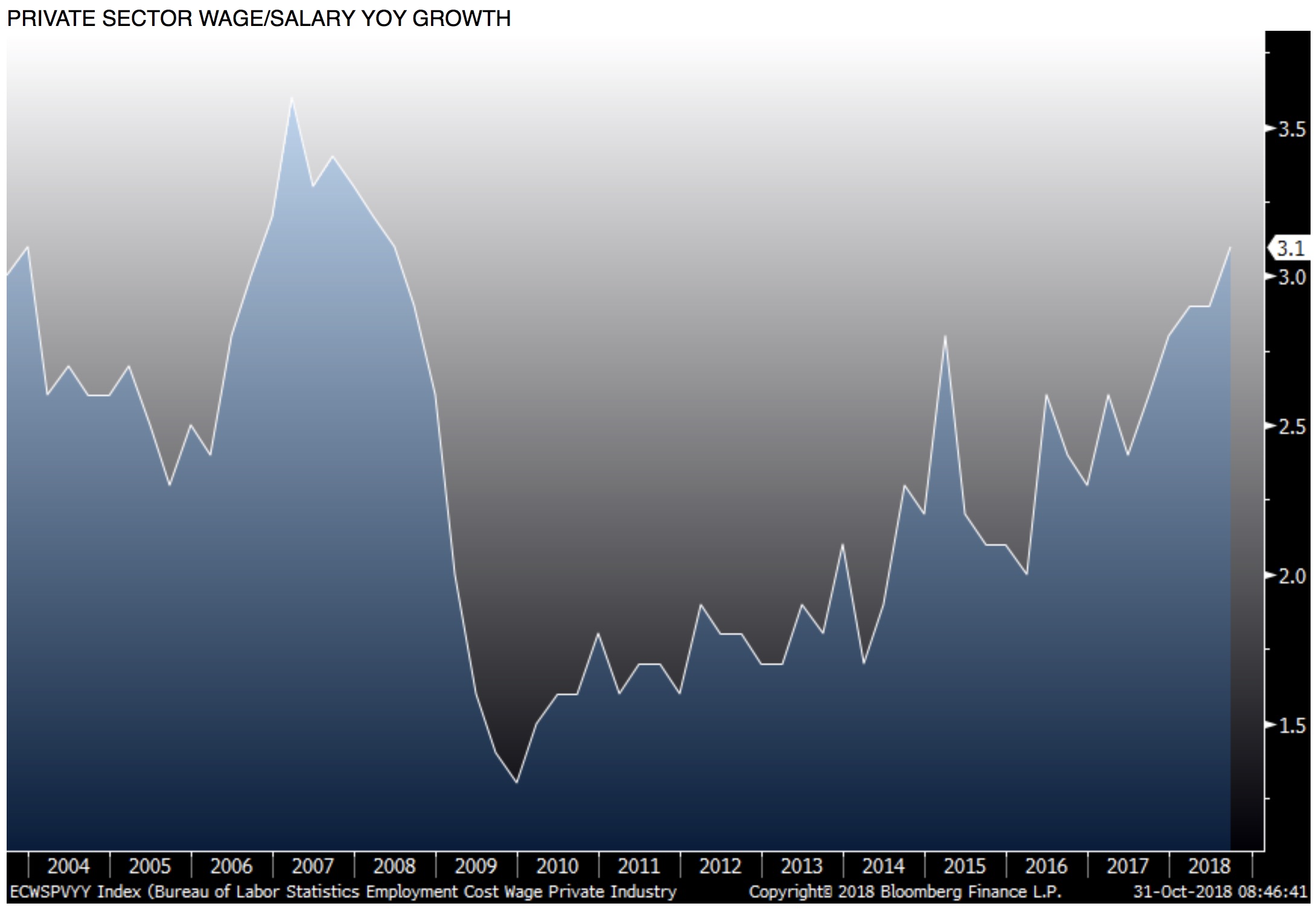 I’ll stick to my belief that rising wages are a real trend that is not being fully captured in the average hourly earnings data because of the change in mix where most of the new workers are young and without a college degree.

About Interest Rates
Treasury yields are moving higher in response to both numbers. The 10 yr yield is back to 3.16%, a one week high. I believe what is most noteworthy about the US Treasury market was that it was not a flight to safety in the month of October that brought us a pretty rough time for stocks. The US 10 yr yield started the month at 3.06%. The short end was not a safe haven either as it began October yielding 2.82% vs 2.88% right now. This however is consistent with my belief that it’s the rise in rates across the curve that is the biggest headwind for stocks.

King World News note:  Meanwhile, gold is struggling in the face of a strong US dollar.  With the COT report remaining bullish, I do not expect much downside in the gold market.  And when the stock market begins to breakdown after another failed rally, that should push gold prices to new short-term highs.

ALSO JUST RELEASED: Gerald Celente Just Issued One Of The Most Important Trend Alerts Of 2018 CLICK HERE TO READ.