With continued uncertainty in global markets, this is what you need to know about what is happening around the world right now.

Stock Market Bulls Are Euphoric
(King World News) – Here is what Peter Boockvar wrote today as the world awaits the next round of monetary madness:  Bullish sentiment remained euphoric in the weekly II data. Bulls were up another .2 of a pt to 59.8. Looking back at the last 10 years, bulls have been above 60 in just 3 time periods, in June 2014 (market ended higher by yr end but a sharp drawdown took place in September/October) , February 2015 (was about the top for the next 15 months) and in October 2007 (was the bull market top before you know what). II in its release said that approaching the level of 60 in bulls is “a stronger warning of a trading top.” Bears were up by .4 pts to 19.6 off the lowest level last week since August 2015 right before the Chinese devalued. Those expecting a Correction are at 2 ½ year lows…

Bottom line, Bulls are unperturbed by a reversal in what they celebrated over the past 7 years, QE and zero rates due all to President elect Trump. I’m positive on the upcoming tax and regulatory relief but I remain of the belief that there is and will be no free lunch from the Fed’s fivefold increase in their balance sheet and eventual unwind and zero and near zero rates for almost a decade, let alone the implications of what foreign central banks have done.

The highest 30 yr mortgage rate since May 2014, see chart, at 4.41% brought the fence sitters off the fence this week. Some weeks it keeps them on and scares them away. Purchase applications to buy a home rose by 2.7% w/o/w after falling by 3.3% last week. Versus last year purchases are about flat. Refi applications dropped by 3% after rising by 3.6% last week but are down 18% y/o/y. These numbers are seasonally adjusted but the MBA does an awful job of doing so around these holidays. Expect a drop off in the next two weeks and a rebound in the first two weeks of the year. Then we’ll really see how people will react to this sharp rise in rates. Existing home sales are out at 10am but will reflect pre rate jump activity. 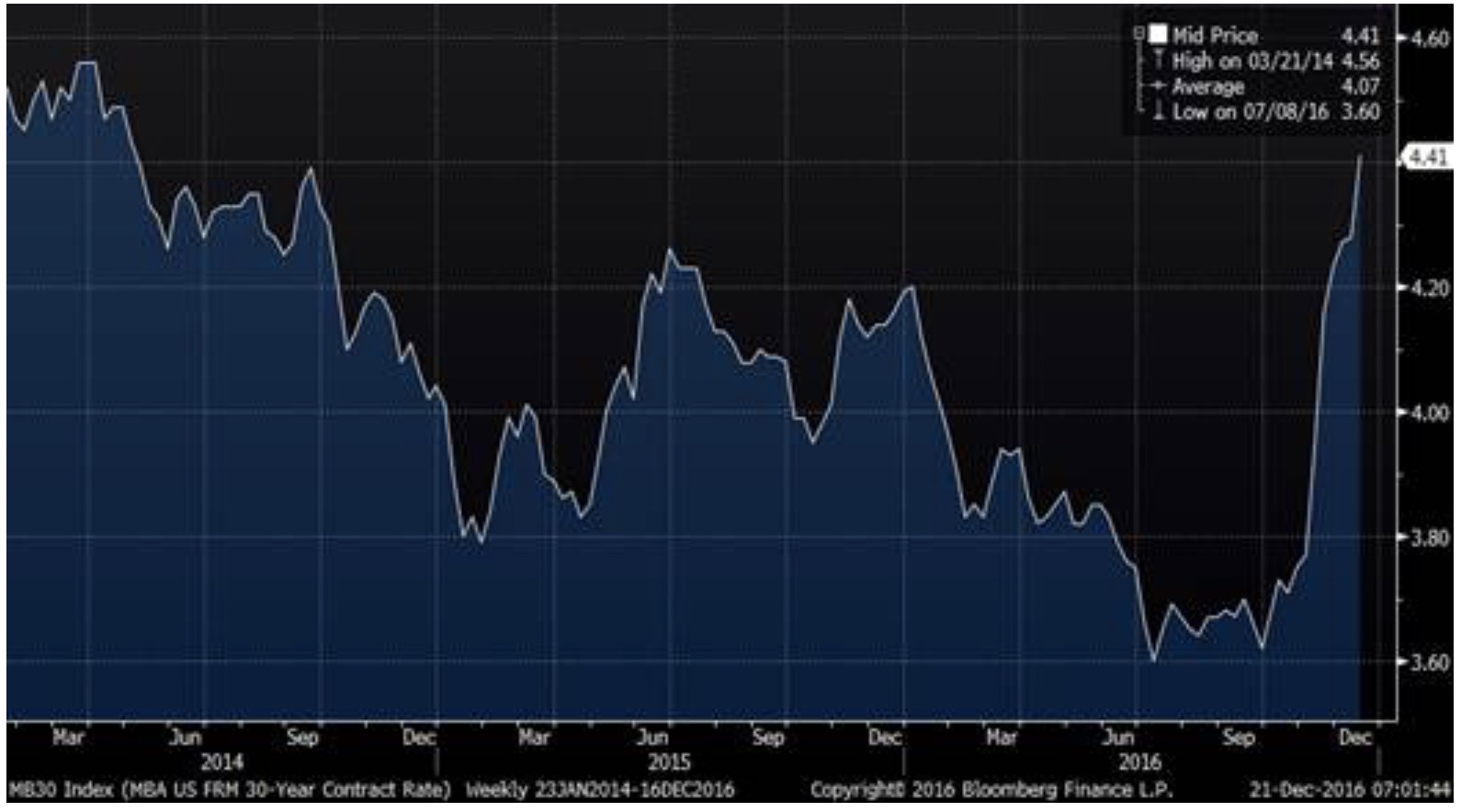 China, which should be a growing focus with respect to their property sector, selloff in bonds and tightening of liquidity, completed two bond auctions (3s and 7s) that went better than expected thanks to shrinking the size of the offer before the auction. This helped to relieve the upward move in yields of late. The 10 yr yield fell by 16 bps to 3.26%. This yield stood at 2.76% the day of the US election. Part of the rise up in yields of late has been forced by the PBOC as they tightened money market liquidity on the short end which forced wealth management products to sell their bonds. These good auctions helped to lift the Shanghai comp by 1.1% off a two month low. Also helping was a rally in state owned enterprises after a story came out that the Assets Supervision and Administration Commission announced its desire to open up SOE investments in certain industries by private investors to create “mixed ownership.” We know the private sector runs a more efficient ship and thus the excitement about this potential reform.

Bottom line, China continues to juggle the desire for reform in liberalizing their capital markets, capital account and SOE’s but at the same time trying to contain in an orderly way its massive debt and property bubble and weakening currency.

European banks are selling off by about 1% but while Italian banks are lower, this is being led by a drop in Spanish banks with Banco Popular in particular down by 7%. The top European court said putting in minimum interest rates for mortgages (aka, mortgage floors) to consumers were not allowed. Consumers are thus entitled to a refund marking the difference between what they actually paid and what they should have paid. Spanish banks have made provisions for what they would have to pay in the event of a negative outcome but with the stocks lower anyway, apparently by not enough. Spanish banks tried to protect themselves from NIRP and now will get penalized for it. I’ve said this before but will again, NIRP is a Weapon of Mass Confiscation. Someone has to eat this tax. The Spanish IBEX is lower by 1% and is down by 2.4% ytd.

We may be nearing an end to the QE and NIRP experiment in Sweden as while they will keep buying thru June 2017, they are slowing the rate of purchases and two of the six voting members wanted to end the program right now. A 3rd member wanted to cut in half the QE purchases. The negative deposit rate will remain the same. The Swedish Krona is rallying to a two month high vs the euro in response to the dissension but this highlights the problem that Sweden faces in keeping the Krona weak against the euro. The ECB has a bigger bazooka than the Riksbank. The Riksbank is now left with a huge property bubble (see chart), rising consumer inflation and the tightening of liquidity in their bond market. They even acknowledged the inflation risks by saying “increasingly strong economic activity creates the conditions for inflation to continue rising” but let’s keep on printing huge amounts of money anyway (I say). We’ll see how this ends. 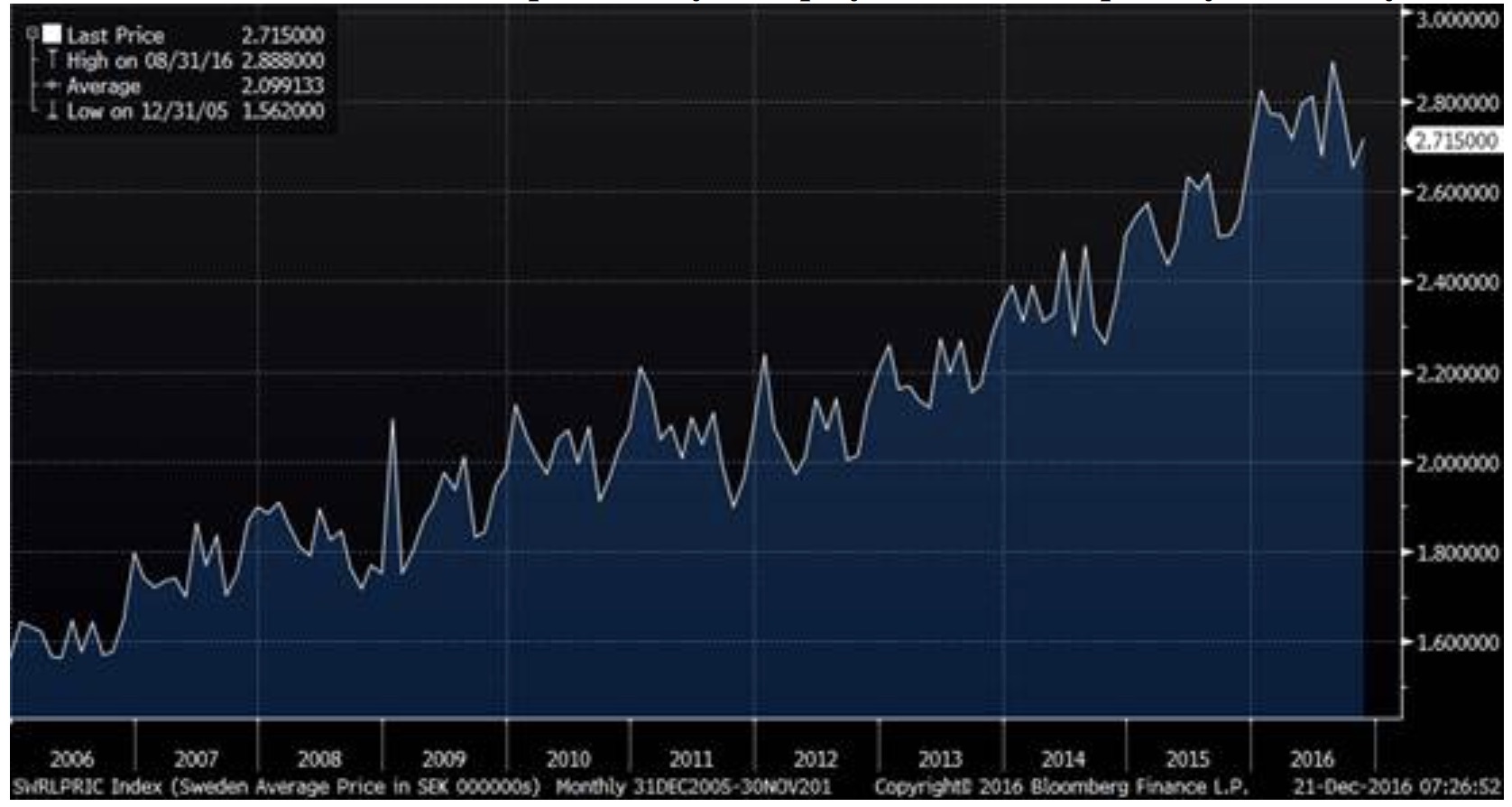