With the war in gold continuing to rage, today one of the most respected veterans in the gold world told King World News that the Western central bank cartel which has been capping the gold price for more than a decade is nearing the point of collapse as panicked phone calls are now being made to acquire sizable amount of gold.

James Turk: “The battle for $1,200 gold is really heating up, Eric. The shorts have drawn a line in the sand, and the efforts they are making to cap the gold price is obvious….

“First, there are the hedge funds and specs that are short the gold price. They want to exit their positions with as much profit as possible. So they are defending their short positions with even more shorting in the hope of getting lower prices, which partly explains why Comex open interest has been rising even as the gold price has risen the last few weeks.

But those still short are probably kicking themselves that they didn’t cover when gold was $60 lower. Then there are the central planners who are short and fighting the rise in the gold price by selling ever more promises to pay gold in the future. But interestingly, Eric, there are central planners on the other side too. These are the central banks and other government entities that have bought paper gold in anticipation of taking physical delivery. There are also some institutional buyers in this group.

But regardless whether they are in the public or private sector, they are riding in the same boat. All they hold are paper promises to receive physical metal. And now this group is starting to become aggressive in taking delivery. They don’t want cash settlement — they want physical metal.

There is an effort underway by this group to get their hands on physical metal before year-end. In this way these institutions can state in their December 31st accounts when they prepare their annual report that they own physical metal and not just some paper promise.

It looks to me that the demands for physical delivery by this group are going to set the stage for higher gold prices as we move toward year-end. Only higher prices can end the limited availability of physical metal prevailing with gold under $1,200.

The miners cannot ramp up production of physical metal overnight. The metal needed to bring supply and demand back into balance and eliminate the backwardation can come only from above-ground stocks. Importantly, after a three-year price correction, this metal is in strong hands. These owners of physical metal will need a much higher price to entice them to sell their metal and hold some national currency instead.

There is an exception of course to the strong hands who own the above-ground stock. These are the central planners who continue to empty central bank vaults in a vain attempt to fight reality. Although they occasionally win a battle or two, they are losing the war.

These central planners won a small skirmish today, Eric, by keeping the gold price under $1,200 for the Comex options expiry. These guys along with their bullion bank agents are playing their usual games at month-end option expiry. This price capping may remain a bit longer because there are still the over-the-counter options here in London and elsewhere to expire over the next couple of days.

The bullion banks that sold $1,200 calls will do everything in their power for those options to expire this week out of the money. But every reaction has an opposite reaction, and we are clearly seeing the recoil here in London.

Even though the gold price has risen over $60 since the $1,130 low was reached earlier this month, not only has the backwardation persisted, it has actually become deeper and extends out a full six months to levels I have never seen before. We are in uncharted territory.

The institutions converting their paper gold into physical gold are strong hands and not sensitive to the rising price. They locked in the delivery price when they purchased their paper contract and they are holding the bullion bankers’ feet to the fire to demand delivery even though there is not enough metal around to deliver.

But instead of the gold price rising to correct this imbalance, central-planner price capping has caused the backwardation to deepen. The central planners are also causing some frantic phone calls trying to locate sizable amounts of physical metal. The situation is on the edge of becoming panicky.

There is only one conclusion to take from this exceptional situation. We are witnessing a history-making event, and where it will lead is clear to me. This cartel run by central planners for more than decade to cap the gold price will collapse, just as their cartel called the London Gold Pool collapsed in March 1968 after nearly a decade of trying to keep gold at $35 per ounce. And while it is impossible to predict when this collapse will occur, the writing is on the wall.

Given today's unique circumstances of the deep backwardation and the extreme tightness of physical metal, December 2014 has the potential to go down in the history books alongside the March 1968 unleashing of the gold price that marked the beginning of the great gold bull market of the 1970s.” 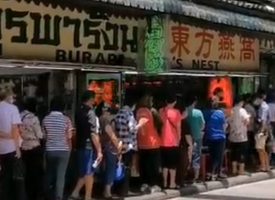 Celente – These Wild Cards Can Crash Global Equities And Economies