As gold and silver continue to consolidate their year-to-date gains, here is the latest on the precious metals markets and a major shakeup in China.

First, let’s take a look at the latest sentiment numbers for both the gold and silver markets.  Sentiment in the gold market has pulled back from the “Excessive Optimism” levels seen earlier in the summer as gold continues to consolidate what has been the best year-to-date gains in 36 years (see chart below). 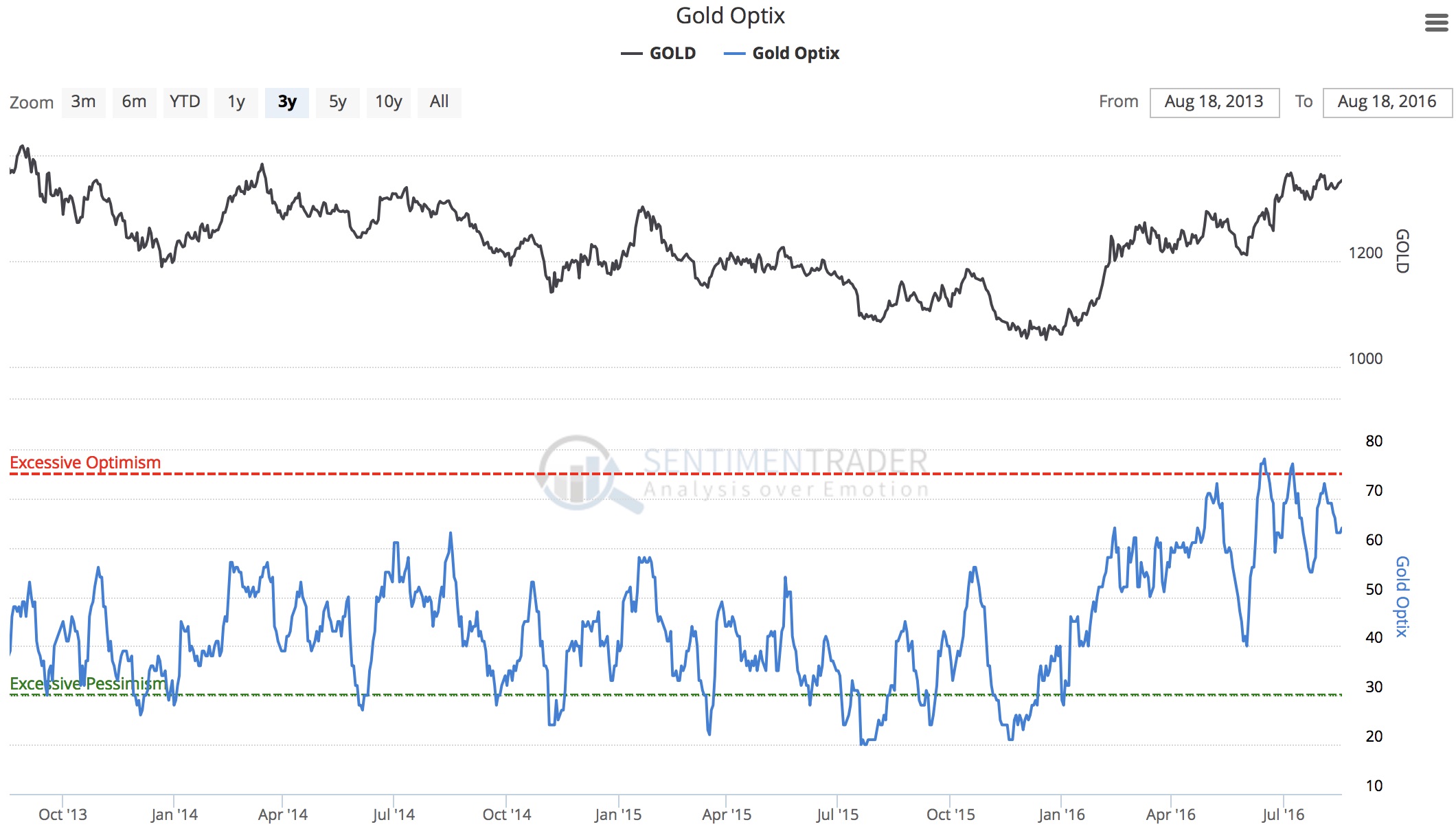 Meanwhile, sentiment in the silver market has also pulled back from the “Excessive Optimism” levels seen earlier in the summer as silver consolidates what has been a very impressive year-to-date performance (see chart below). 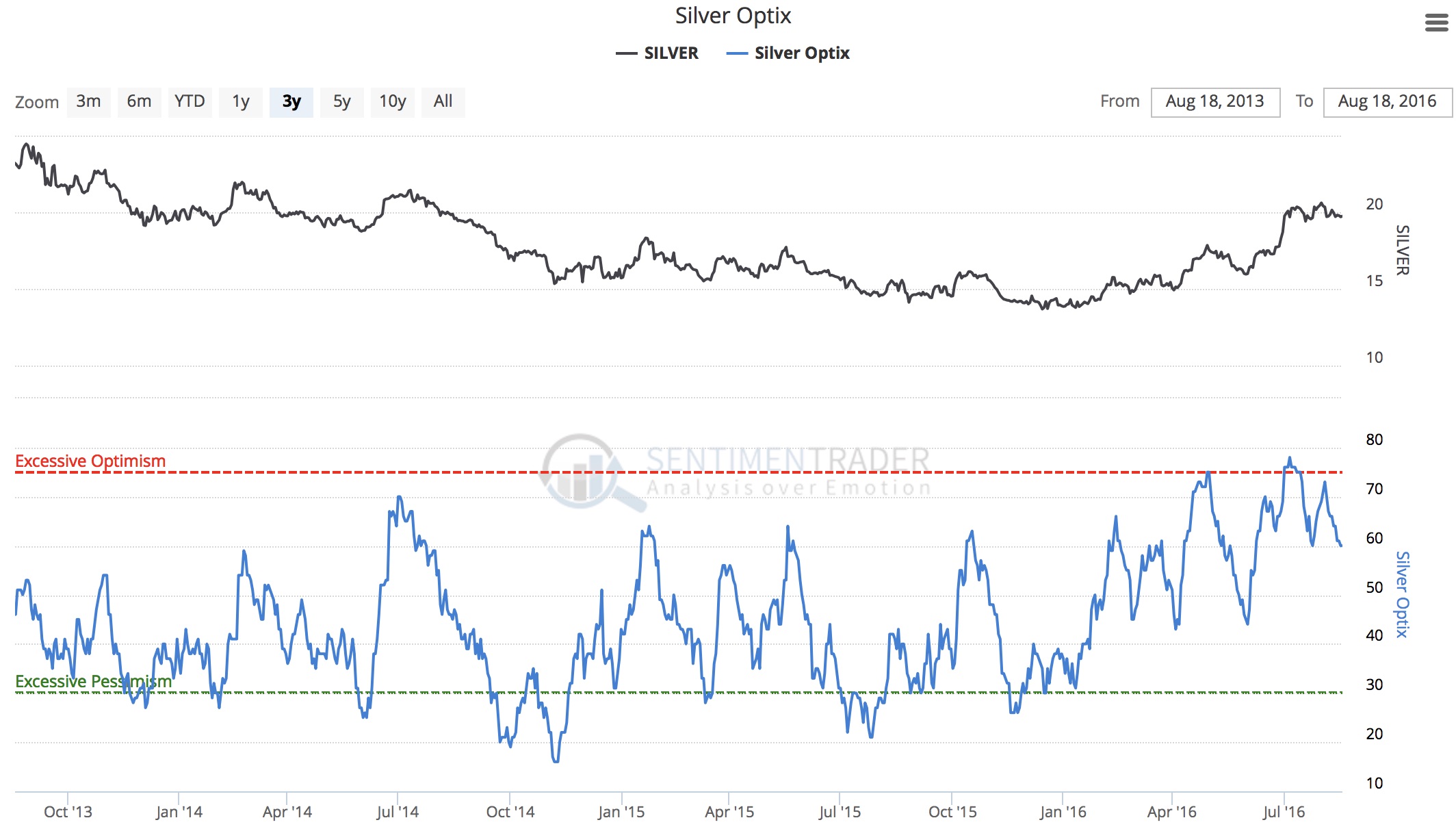 It will be very interesting to see how gold, silver, and the U.S. dollar trade in the days and weeks ahead as the dollar has been trading very weak as of late.  If the dollar breaks down from current levels, that would potentially ignite another round of strong gains in the gold and silver markets this fall.

Also of importance, a major shakeup in China?

A portion of today’s note from Art Cashin:  Back From The Beach – The annual beachfront gathering of the Chinese leadership at the town of Beidaihe broke-up on Tuesday, August 16th. The upcoming Economist thinks the breakup may presage a new broad based consolidation of power by President Xi Jinping. Here are a few key points from the article:

The country’s politics has entered a period of unusual uncertainty and tension. In the coming months President Xi Jinping will supervise sweeping changes to the party’s leadership at every level, culminating late next year in the unveiling of a new Politburo (which he will continue to lead). This five-yearly process will be overshadowed by bitter struggle between the president and rivals close to his predecessors, as well as growing concerns about the health of the country’s economy. The leaders in their seaside villas will not have been in the mood to party.

It was Mao Zedong who began the tradition of holding informal meetings at Beidaihe. The idea was to provide a forum at which current and former leaders could meet away from Beijing’s sweltering summer and daily grind. In the 1980s and 1990s the discussions were a useful way for Deng Xiaoping, who was then pulling strings behind the scenes, to convey his views to those who were nominally in charge. But Mr. Xi tries to keep interfering party elders at bay (his predecessor-but-one, Jiang Zemin, turned 90 on August 17th, though still retains influence). Unlike his immediate predecessor, Hu Jintao, Mr. Xi appears to have far less time for the old boys.

Power plays
In theory it should be relatively easy for Mr. Xi to place henchmen in positions of power during the reshuffles. The president is far more of a strongman than Mr. Hu was. He has dismantled Deng’s system of “collective” leadership, taking to himself more formal positions of authority than his predecessors did. As were Mr. Hu and Mr. Jiang, Mr. Xi is the party’s general secretary, state president and chief of the armed forces, but he is also much more. He has expanded a system of “small leading groups” under his own chairmanship, giving them sway over areas of policy that used to be the preserve of the government and the party’s highest bodies.

Mr. Xi has also been engaged in a fierce campaign against corruption, which has spread fear throughout the bureaucracy; his rivals have been among its most prominent victims (the most recent, Ling Jihua, who once served as Mr. Hu’s aide, was sentenced to life imprisonment in July). In all, 177 people with deputy-ministerial rank or above have been investigated as part of the crackdown since Mr. Xi took over in 2012. He has had over 50 generals arrested for graft and promoted his own men in their place, says Cheng Li of the Brookings Institution, a think-tank in Washington, DC.

Even so, Mr. Xi’s authority remains hemmed in. True, his position at the highest level looks secure. But among the next layer of the elite, he has surprisingly few backers. Victor Shih of the University of California, San Diego, has tracked the various job-related and personal connections between the 205 full members of the party’s Central Committee, which embodies the broader elite. The body rubber- stamps Mr. Xi’s decisions (there have been no recent rumours of open dissent within it). But the president needs enthusiastic support, as well as just a show of hands, to get his policies—such as badly needed economic reforms—implemented. According to Mr. Shih, the president’s faction accounts for just 6% of the group. That does not help.

The article goes on to note that Xi will have a very unusual opportunity to strengthen his influence on the Central Committee. Next year he will get a chance to appoint 92 members to the 205 member Committee. (The usual list of new appointees is 40 or 50 every five years.) This could get very interesting.

Overnight And Overseas – In Asia, markets were mixed with only minor changes. Tokyo and Shanghai were mildly higher, while India and Hong Kong slipped slightly. In Europe, stocks are generally weaker with London, Paris and Frankfurt all showing red ink. Autos and financials led the selling. In other assets, gold and crude are lower, while the dollar bounces slightly off its lows. Treasury yields are a smidge higher.

Consensus – Fed types do not just contradict each other, now they contradict themselves. Williams follows his very dovish speech with a call to raise rates soon. Let’s see if crude short squeeze is spent. Stay wary, alert and very, very nimble.

***ALSO JUST RELEASED: This Remarkable Set Up Has Happened Only One Other Time In The Past 10 Years CLICK HERE.