As we kick off the first week of trading in October, today James Turk told King World News that Deutsche Bank’s failure will usher in the next Great Depression.

Eric King:  “That was a great call you made last week, James, with the caution you issued about the impact that end-of-the-month option expiration would have on gold and silver prices.”

James Turk:   “Thanks, Eric. Of course nothing is obvious when it comes to markets, which is another way of saying the future is unpredictable.  But the future – or at least in the very short term – can be controlled from time to time, and we saw that happen last week when gold and silver swooned into option expiry…

So I was not predicting anything. I was simply focusing on the probabilities that gold and silver would get hit last week, and they did.  Gold was down -1.8% from the New York close the previous Friday. Silver, which is usually more volatile, was hit harder, closing down -3.0% on the week.”

Eric King:  “When you say that ‘the future can be controlled from time to time,’ are you referring to the fact that all markets can be manipulated?” 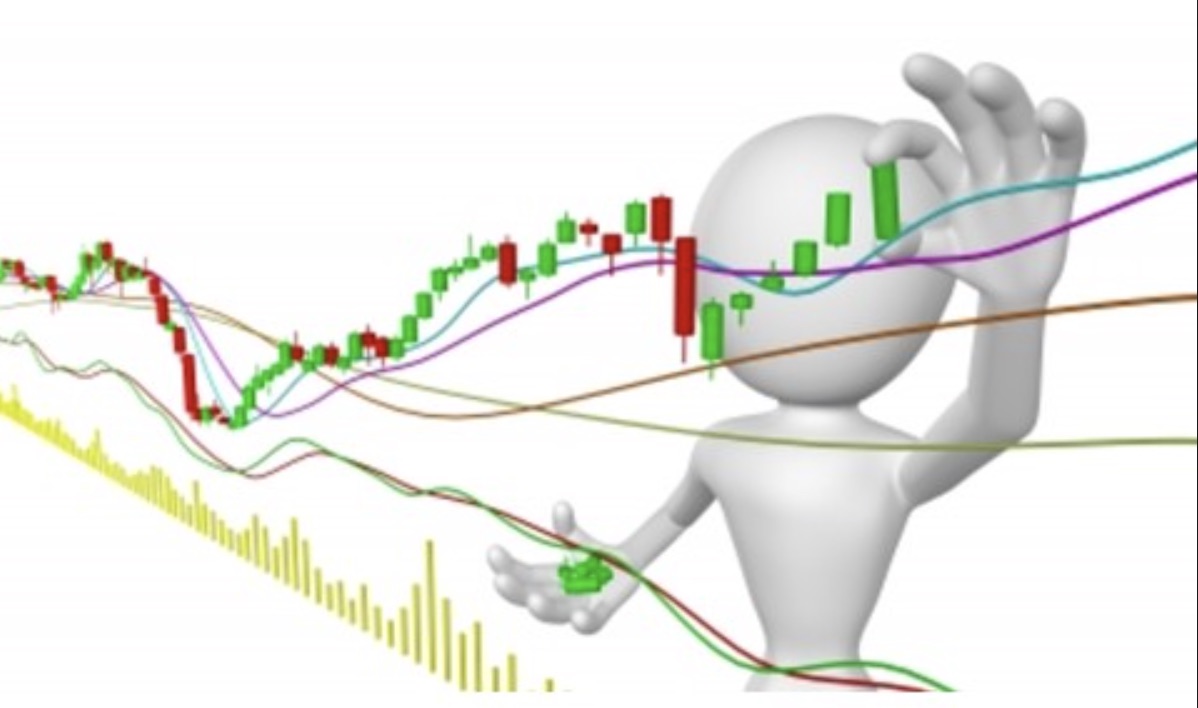 Bullion Banks – Agents Of The Fed – Paint The Tape
James Turk:  “I was commenting mainly on gold and silver, which are the markets I follow most closely. But I suppose that most markets can be controlled for a time at least to some extent. It depends on what you call it.  I used the word ‘control.’ Others might prefer the term manipulation or intervention.  But these short-term swings pressuring the market one way or the other have been around for ages.  It’s often called ‘painting the tape,’ which of course refers to the stock market ticker-tape used a century ago to disseminate share prices. That expression itself shows that market manipulation has been around for a long-time.

There is a related point.  The Federal Reserve often speaks of controlling expectations. That’s a politically correct way of describing propaganda.  Today for example, it was reported that U.S. construction spending weakened and automobile sales slowed in September.  It looks like the economy is in a recession, but it won’t be called that until after next month’s election to control expectations.  Also, the well-trained mainstream media doesn’t want to embarrass the Fed or any politicians before the election.”

Eric King:  “James, I know that the drop in gold and silver prices last week did not change your bullish outlook for the precious metals.”

Particularly Bullish On Silver
James Turk:  “Not in the slightest, Eric.  It was just a bump on the road to higher precious metal prices.  I am bullish on both precious metals, but I remain particularly bullish on silver. So even though I said last week was one in which to be cautious, I didn’t say to sell.  Instead, I actually said ‘option expiry is a good time to buy.’

I think KWN readers are familiar with my strategy, which I have been recommending since starting Goldmoney back in 2001.  Buy gold on a cost-averaging basis with regular purchases in a fixed amount that fits within your family’s budget.  Follow the same strategy if you are prepared to accept the higher volatility that comes with silver.  The important point is to stick to your plan rigorously and don’t try to outguess the market.

If your plan is to buy, for example, on the last day of every month or perhaps the first day of every new quarter like today, then go ahead and buy the same fixed dollar amount of gold on the day you have scheduled.  What you are doing in effect is saving money.  We don’t hear much about savings in today’s crazy world because it doesn’t make sense to save national currencies when any interest income you earn is less than the inflation rate.  But it always makes sense to save sound money.  That’s a prudent thing to do, which is exactly what you are doing when you accumulate gold and silver over the long-term.

Eric King:  “James, if someone is following your plan, they are riding the long-term uptrend in the precious metals, which reflects the ongoing debasement of the US dollar and other national currencies.”

James Turk:  “Yes, exactly, but there is also another benefit. You are accumulating money outside of the banking system, which is teetering on the edge of collapse.  Again, it is impossible to predict the timing of these things, but we have spoken before about the situation here in Europe as have others who you interview.  So KWN readers have been far ahead of the rest of the field about Deutsche Bank and other European bank problems.

Deutsche Bank To Usher In The Next Great Depression
Now that Deutsche Bank’s shaky state is making headlines, everybody in the world knows about its precarious financial condition.  But I still think the crisis will start in Italy, and that Deutsche Bank will get hit in the second wave, just like Lehman was a second wave casualty eight months after Bear Stearns collapsed.

There’s an interesting comparison I would like to make. Many observers mark the beginning of the Great Depression with the failure of the Bank of the United States in December 1930, more than one year after the 1929 stock market crash.  Although it was privately owned and not the US central bank, its failure sent shockwaves throughout the globe because its name was so closely associated with the US and its economy. Deutsche Bank can be roughly translated as ‘Germany’s Bank,’ and should it fail, the psychological impact could be similar.

My point here is that Germany is considered to be the success story of the European Union.  But if the failure of one of its big banks pulls back the curtain, what will we see?  A welfare state just like all the others with a lot of promises by politicians and a mountain of debt. It’s worth thinking about.

Eric King:  “What do you expect for gold and silver prices as we move toward the end of the year?”

James Turk:  “As I mentioned, I like to focus on probabilities.  I thought that there was a high probability that gold and silver would get hit last week, so I issued the caution.  We’ve got three more months until the end of the year, and I thought it would be interesting to analyze the results of what has happened in the fourth quarter since this latest bull market began in 2001.  Here’s a table of those results. 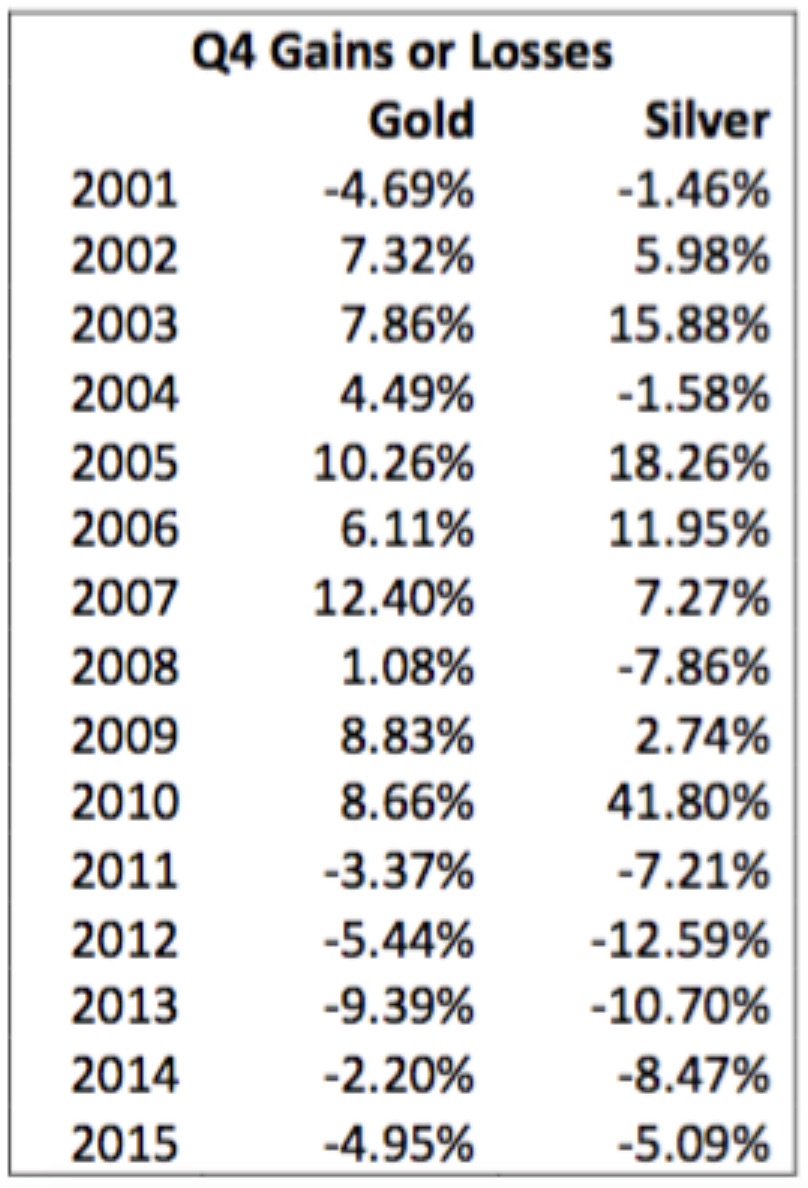 Gold rose nine times in the fourth quarter, and declined six times over these fifteen years. So the probabilities suggest gold will be higher again this fourth quarter, concluding what will be a solid year for the precious metals.”