With historic events taking place around the globe, the Godfather of newsletter writers, 90-year old Richard Russell, covered everything from a stock market collapse, to gold, hyperinflation, and massive numbers of homeless people in New York.  The 60-year market veteran also included a fantastic chart to go along with his outstanding commentary.

Russell:  “On the news that Japan is back in recession, the Central Bank of Japan countered the news with a massive explosion in quantitative easing. On this news, Japan’s yen semi-crashed.

The stock market in the US continues with its bullish progression, a sell signal, little downward follow-through, and then either the Dow or the Transports goes to a new high. Today, with 50 minutes to the close, the Dow is well on its way to recording a new record high.”

GOLD: A Second Reversal To The Upside: We've not the computer capabilities to research this properly, but quite honestly we cannot ever recall having seen any commodity … much less gold … trace out two reversals to the upside in this fashion before!  This is wildly bullish action and we shall be adding to our Gold/Yen trade this morning as a result.  We've really no choice.

Russell continues:  “I just received John Willams’ Shadow Government Statistics. His headline, “October Retail Sales Were Near Consensus, with Minimal Revisions and a Sharply Slowing Pace of Fourth-Quarter Growth. Negative Surprises on the Economy and in the Political Arena Are Among Imminent Top Threats to the US Dollar."

And I’m wondering – is the US going to follow Japan’s shockingly bad economic news? If so, our stock market can follow Japan’s market – meaning a crash.

Sign of the times: according to the New York Times, there are now upwards of 50,000 homeless people sleeping in the doorways and on the streets of New York City. It reminds me of the good old days of the 1930s.

All my subscribers should have some kind of position in GDXJ. The hatred against gold continues. This has had the effect of keeping gold out of the hands of the public. I liken it to a great ship sinking while the crew punches holes in the life preservers.

In the face of the trillions of dollars that have been created over recent years, it’s surprising that so few analysts have considered the possibility of out-of-control hyperinflation..

If the US does move into hyperinflation there is a very easy way to protect yourself from a crash in the dollar and rocketing prices in all areas. I discussed this briefly on yesterday’s site. Ironically the best way to protect yourself from hyperinflation is through the lowly and hated gold miners. Many of these are cheap, despised, and forming bases. When an item is cheap and hated and appears to be forming a base, it is worth studying.

The chart below shows an item that is detested and probably statistically cheap. GDXJ is below its blue 50-day moving average with stands at 36.76. According to the RSI, GDXJ is oversold. The first suggestion of a reversal to the upside will be a closing price of 37. Note the heavy volume in the year 2014. For every seller there must be a buyer. The question is, are the buyers onto something? 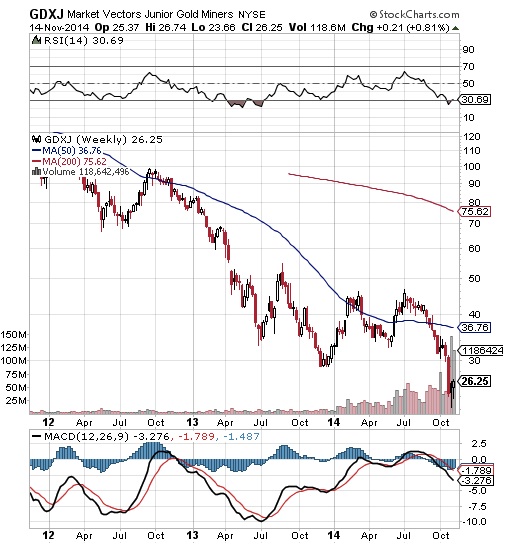