As we begin the final week of trading in August, here is what is moving markets across the globe.

Markets On The Move Across The Globe
August 27 (King World News) – From Jeffrey Saut at Raymond James:  Over the past three weeks of travel, there have been some recurring questions, mainly from portfolio managers. To wit, “Jeff, the S&P 500 is up some 7% year-to-date, while the MSCI All World Index (ex U.S. equities) is down roughly 6%. Shouldn’t we reduce our U.S. holdings and move that money into international equities?” Clearly that’s a valid question, but history says no. As our friends at the invaluable Bespoke Investment Group write:

[Chart 1] shows the year-to-date performance of the S&P 500 vs. the MSCI All World ex US index (basically an index of international stocks). 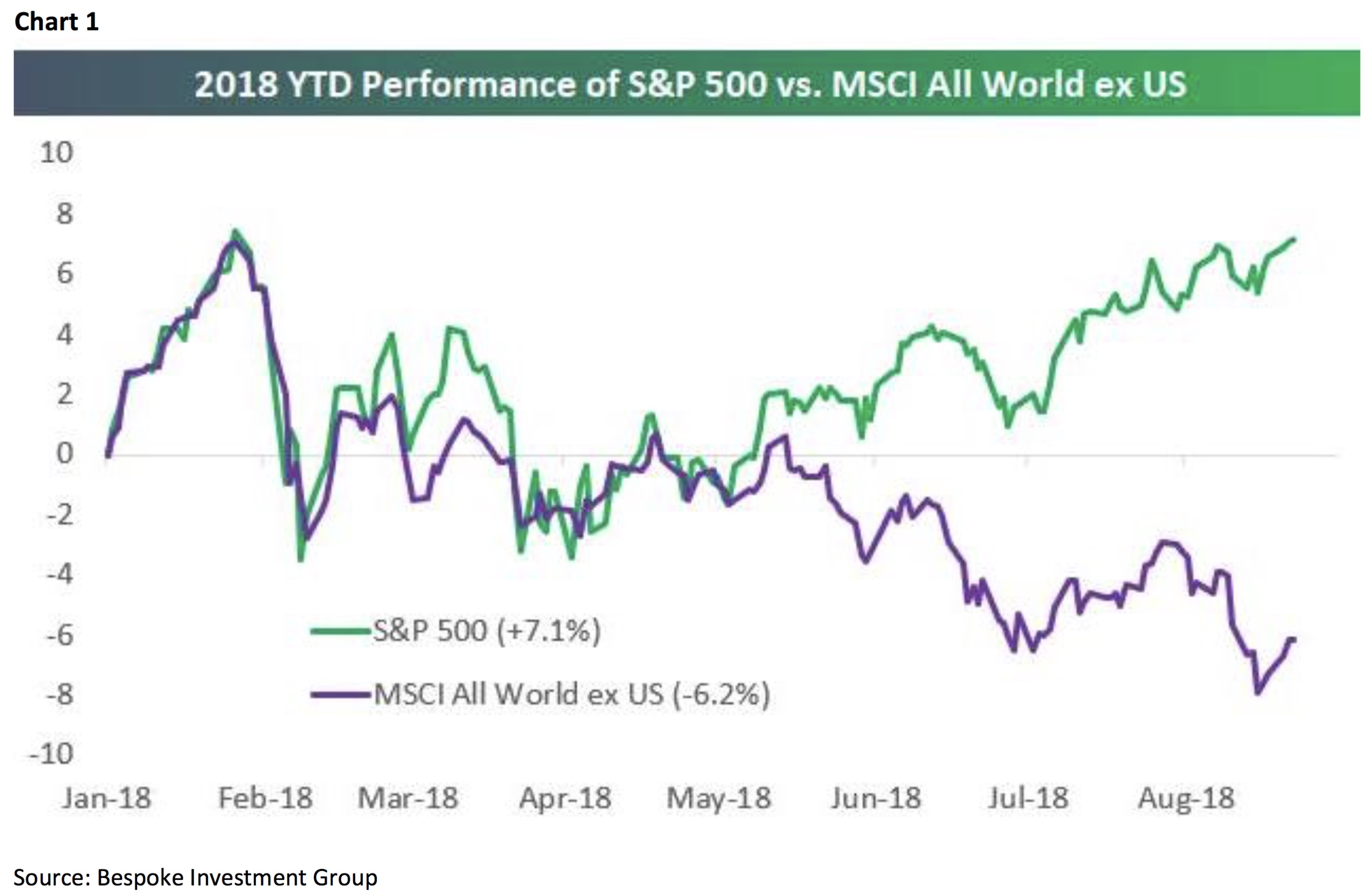 While U.S. and international equities performed right inline with each other through early May, their paths have completely diverged over the last three and a half months. As shown, at the moment, the S&P 500 is up 7.1% year-to-date vs. a decline of 6.2% for the rest of the world. Given the relative strength of U.S. stocks this year, investors may be tempted to fade the trade and start rotating out of the US and into the MSCI All World ex US index. History has shown, though, that this would not be a smart trade. In years when the US has outperformed, it has continued to outperform for the remainder of the year. In years when the US has underperformed, it has continued to underperform. While the trend of US outperformance will eventually turn, it’s best to ride it out through year end at this point at least based on historical tendencies…

Another ubiquitous question we got was about emerging markets (EM). Here is the “rub” with EM, as expressed by Jacob L. Shapiro, a geopolitical analyst for Geopolitical Futures:

The problem may now be coming to a head. Dollar-denominated debt has ballooned. In its latest quarterly report, the Bank of International Settlements found that U.S. denominated debt to non-bank borrowers reached $11.5 trillion in March 2018 – the highest recorded total in the 55 years the bank has been tracking it. Meanwhile, the dollar has strengthened amid a tepid global recovery from the 2008 financial crisis. As the currencies of indebted countries weaken against the dollar, it is becoming harder for some countries to pay their debts. This could be a bubble waiting to pop, especially if vulnerable countries don’t have the monetary policy options to protect themselves.

What these countries have in common is that they are all on a 13-country list released by the Bank of International Settlements. Together, they constitute 62 percent of all dollar-denominated debt held by emerging market economies. Turkey was one of the most vulnerable on the list, but there are four other countries facing similar challenges: Argentina, Mexico, Chile and Indonesia. Argentina’s peso is already in free fall. The government announced on Tuesday that it would sell $500 million worth of reserves and raise interest rates to stop the peso’s fall.

After meeting with a number of EM portfolio managers over the past few weeks, we think, if your time horizon is three to five years, EM, if bought when under pressure, should be fine.

This is a portion of today’s note from legend Art Cashin: Overnight And Overseas – Markets in Asia are generally higher on varied news. Japan had a moderate rally as PM Shinzo Abe began moves for a historic third term. The PBOC signaled new support for the yuan, which seems to have sparked a sharp rally in China equities. Shanghai rose the Dow equivalent of 480 points. On the same basis, Hong Kong shot up 550 Dow points. India also saw a sharp rally, soaring the equivalent of 300 Dow points.

In Europe, London is closed for the August Bank Holiday. Paris and Frankfurt are seeing modest rallies.

Among other assets, Bitcoin rallied somewhat and is trading just above $6700. Gold and crude are slightly lower. The euro is a touch lower against the dollar, while yields are a tick or two lower.

Consensus – A trade agreement between the U.S. and Mexico is rumored to be hours away. If it is announced, it could spark a sigh of relief pop in the market.

ALSO JUST RELEASED: Greyerz – The Price Of Gold Is About To Skyrocket As We Enter The “Dark Years” CLICK HERE TO READ