If you really want to know what’s happening right now, take a look at this…

Take A Look At This
June 2 (King World News) – Here is a portion of some excellent work done by Liz Ann Sonders, Chief Investment Strategist at Charles Schwab:  In a large number of states, it’s more lucrative to collect unemployment benefits than stay in work (see below).

To Work Or Not To Work? 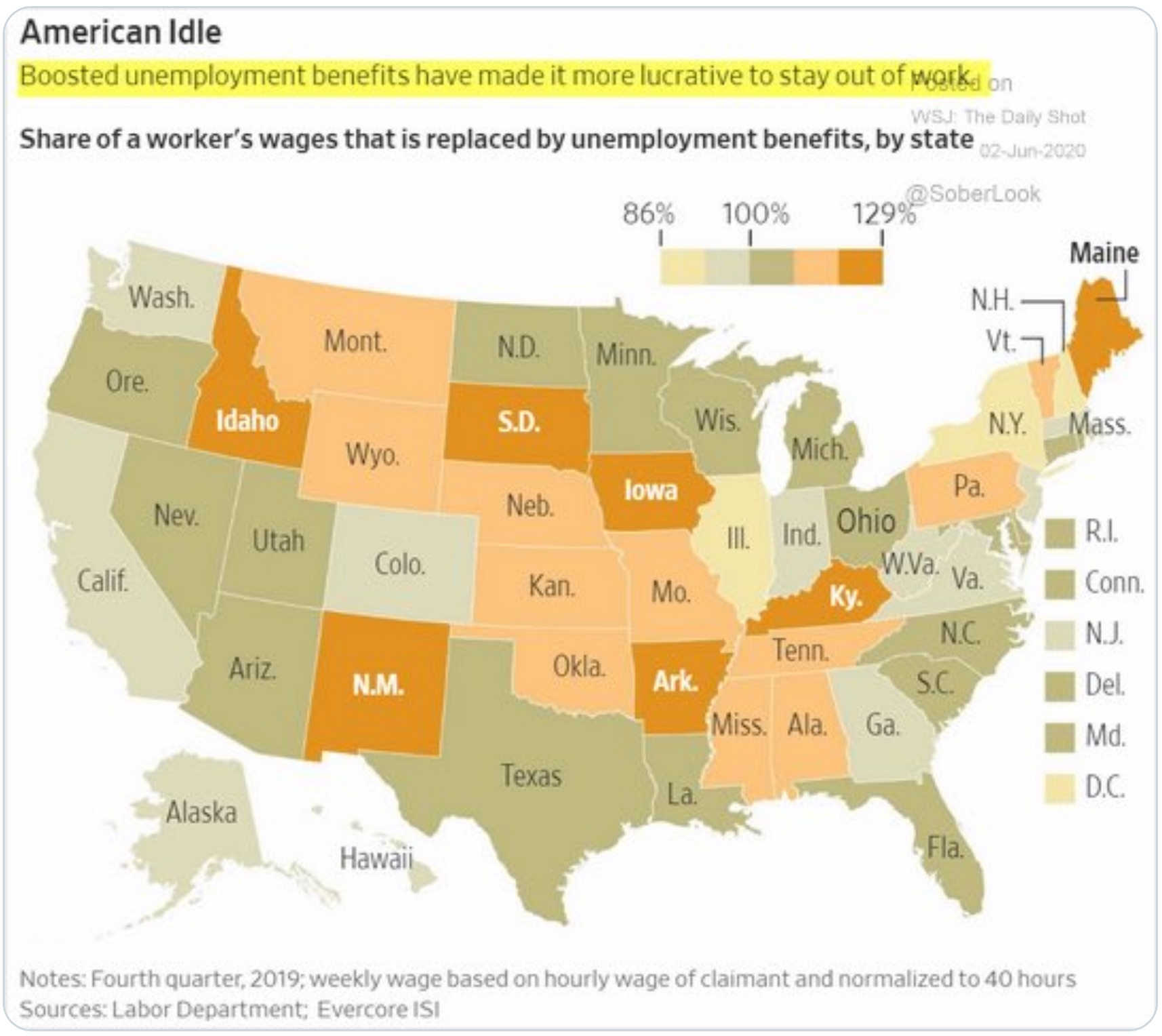 Is the stock market “rigged?”
That’s a refrain I hear often, and there is a kernel of truth there—perhaps best illustrated via the adage coined by my first boss and mentor—the late, great Marty Zweig—Don’t fight the Fed. The Fed’s efforts in trying to prevent the COVID-19 health and attendant economic crisis from becoming a financial system crisis are a combination of pages pulled from the 2008 financial crisis playbook, plus new chapters created for today’s unique crises. Along with relief programs initiated by Congress and the Treasury Department, the combined “stimulus” currently equates to more than 25% of real U.S. gross domestic product (GDP) this year, as estimated by the Congressional Budget Office (CBO).

As you can see in the chart below, the growth rate in M2 money supply has gone parabolic. At the same time, the velocity of money continues to sink—which is why “real economy” inflation has been kept in check. “Money printing” by the Fed (not quite an accurate description of what the Fed’s doing) only becomes inflationary if the liquidity pumped into the financial system comes out via the lending channels and picks up velocity in the economy. Without that velocity, inflation tends to be absent in the real economy—but quite evident in asset prices (like stocks). 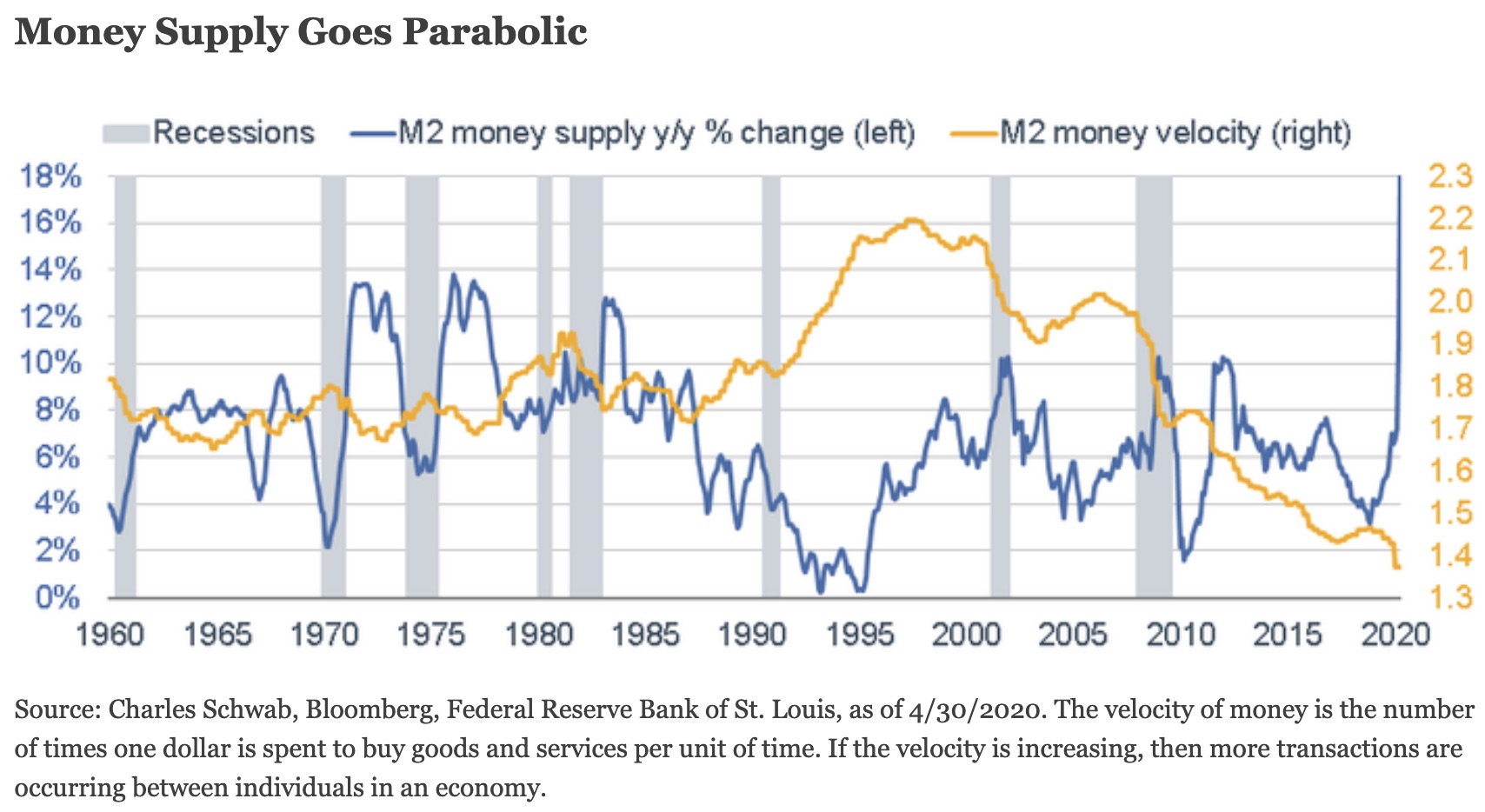 The surge in money supply is reflected on Main Street as well; with the personal savings rate surging to a whopping 33% of disposable personal income; while at the same time, household net worth remains historically high (first chart below). The combination of direct payments from the government to most taxpayers, and enhanced unemployment insurance, has paved the bridge for those affected by the coronavirus crisis with more than just good intentions. Recent surveys show that about 60% of laid off workers have been made more-than-whole relative to their work-based income prior to the pandemic. In addition, households have been in deleveraging mode since the Global Financial Crisis (GFC); with debt levels well below long-term trend lines. 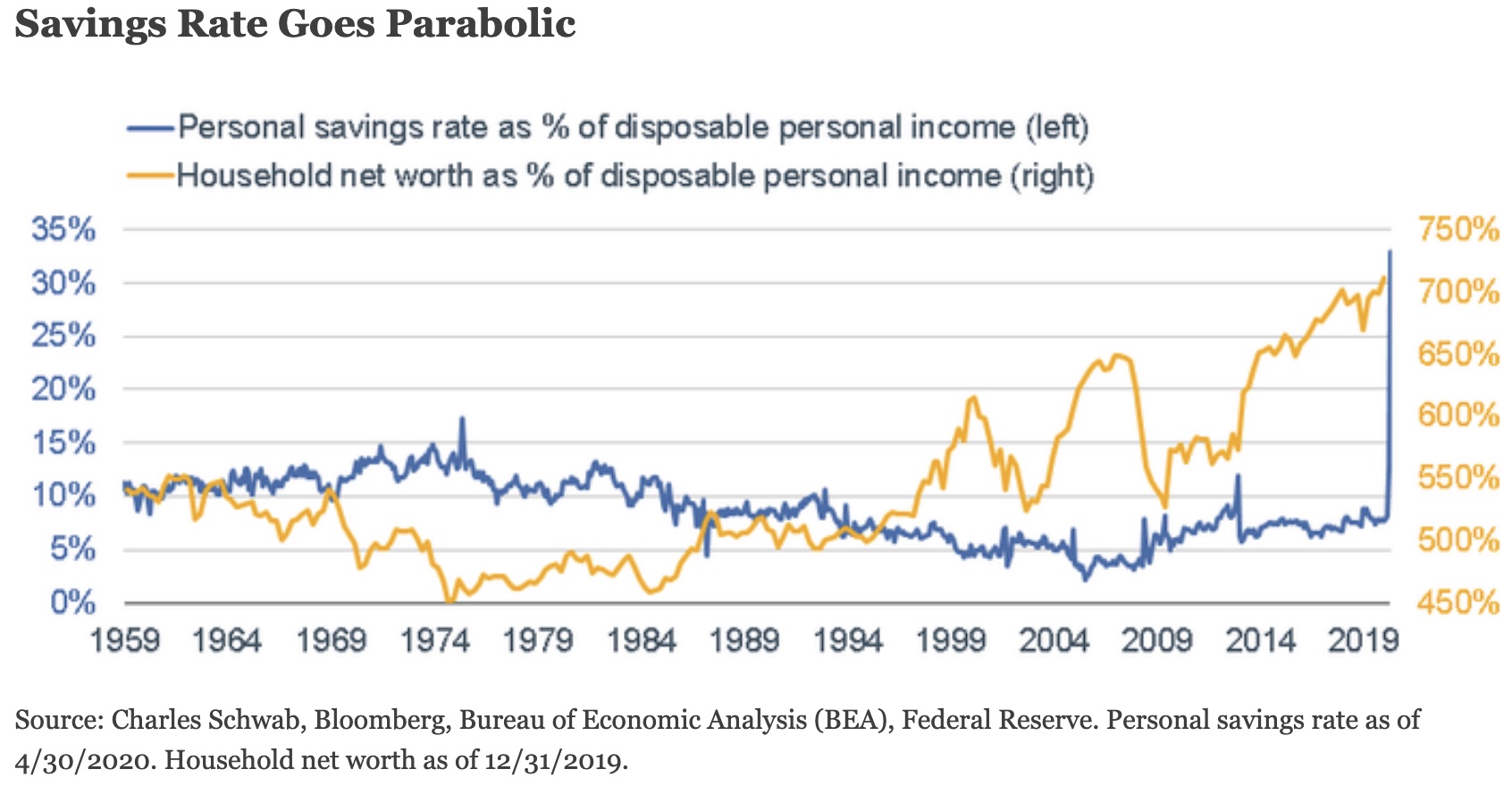 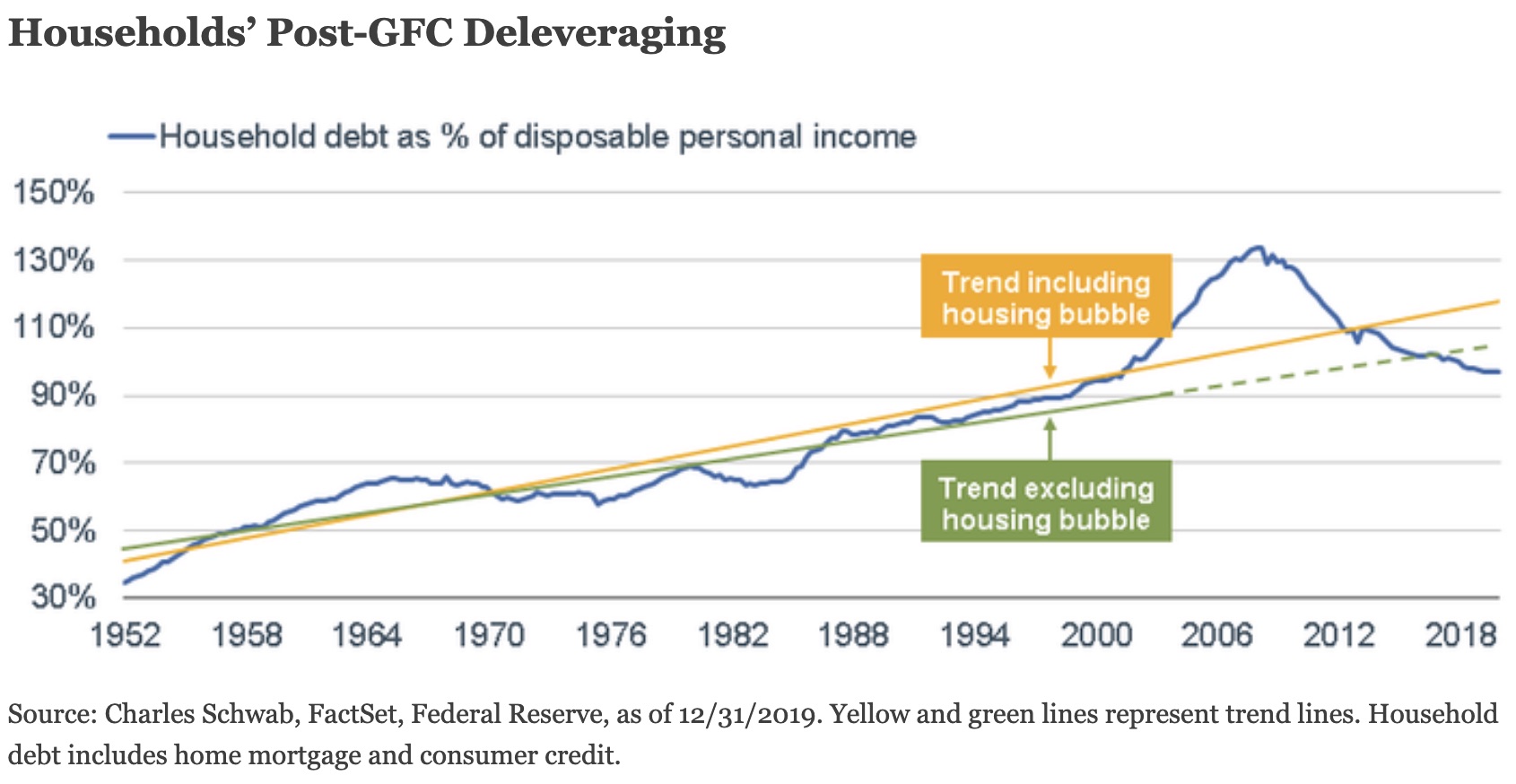 Stocks doing their job as a leading indicator?
As noted, a significant tailwind behind stocks since the March 23 low has been courtesy of monetary liquidity and fiscal relief. But there is more at play. The speed with which the virus spread and the economy was shut down was reflected in the fastest move in history from an all-time high for the S&P 500 on February 19 to a bear market—down 35% at the low. Arguably, that was “discounting” a lot of the economic carnage through which we’re all still living today. But the move up from that low—36% as of Friday’s close—has elicited the cries about the disconnect between Wall Street and Main Street.

Liz Ann Sonders also warned that the “U.S. dollar has broken out of its trading range, falling to lowest level since mid-March” (see below).

US Dollar Now Breaking Down 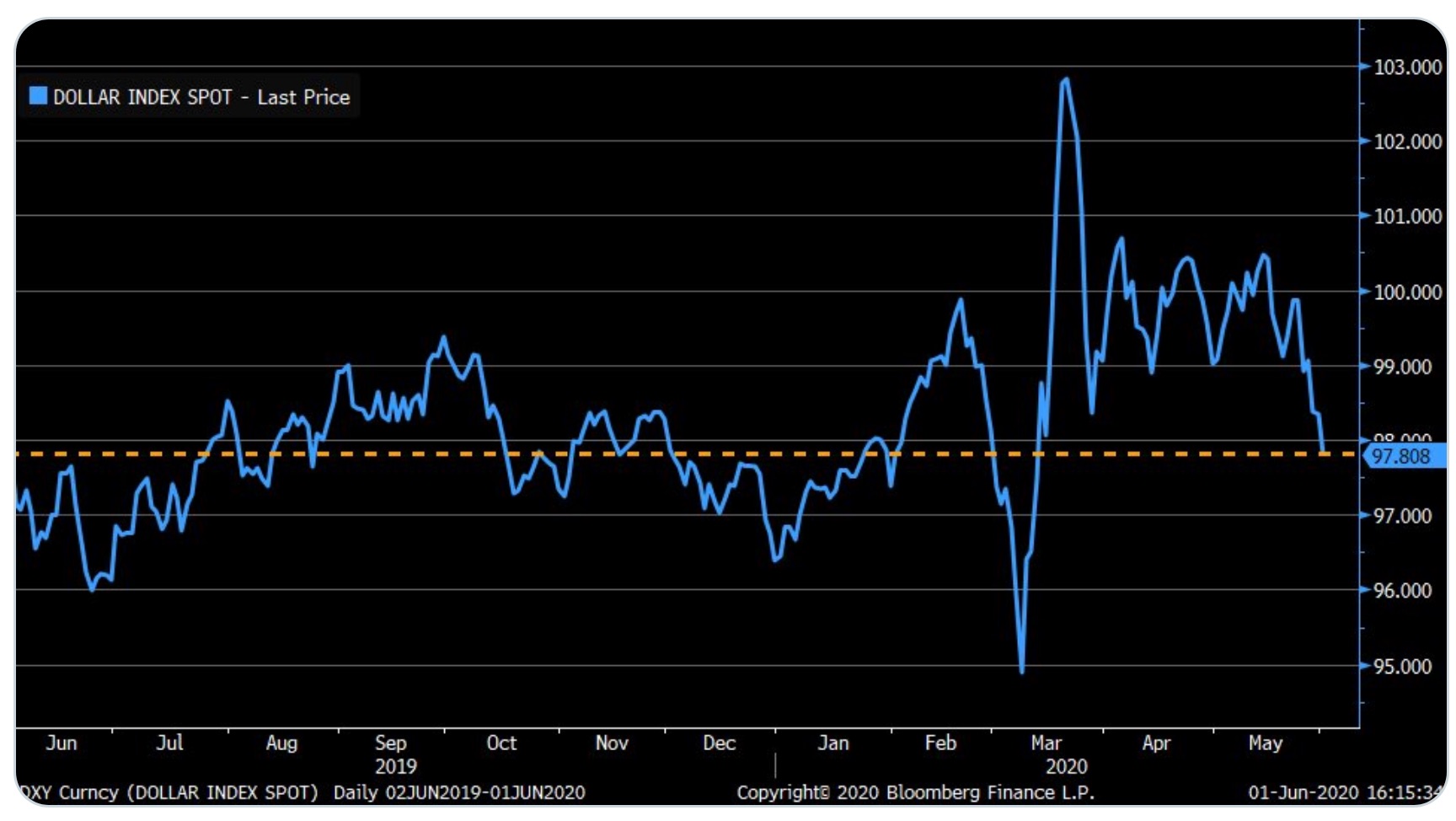