Today one of the wealthiest people in the financial world spoke with King World News about the historic and unprecedented events that are now unfolding in the gold market.  Rick Rule, who is business partners with Eric Sprott, also discussed why other countries becoming so concerned that the U.S. gold is gone, and why this is sparking panic on the part of some countries to get their gold back before all hell breaks loose.

Eric King:  “Rick, you’ve heard the news about Marine Le Pen sending the letter to the French central bank demanding their gold be repatriated back to France, and to also put a halt to any future gold sales.”

Rule:  “I personally think that having control of one’s own gold is a prudent thing to do.  The topic of repatriating gold is getting a lot of play in Europe as a consequence of the Swiss referendum, which you reminded me is coming up on Sunday. 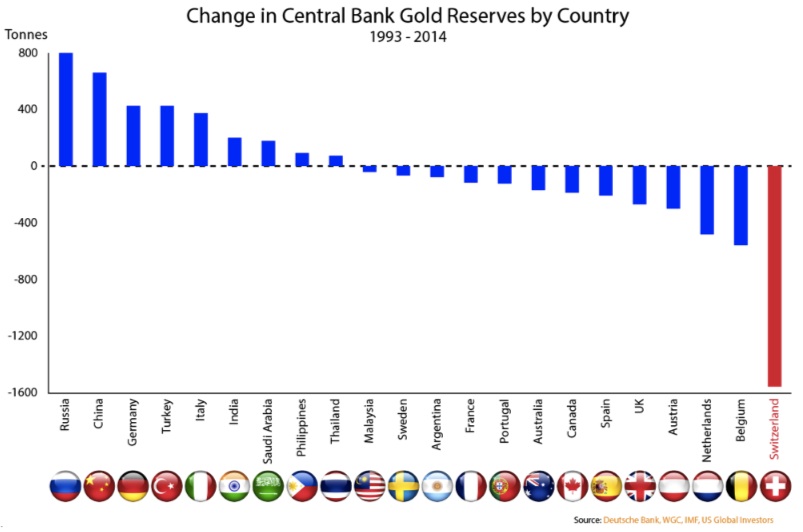 And I think there is an undercurrent, an intelligent undercurrent frankly, of voters in Europe, particularly older voters, who remember that times aren’t alway good.  Who believe this (gold) is part of their national patrimony, it’s part of their wealth, why should we store it in a repository that doesn’t subject itself to an audit?  Why don’t we keep it ourselves?….

Eric King:  “We just talked about what is happening in France, and you brought up the Swiss vote which is coming up this Sunday, but interestingly the Dutch just got back 122 tons of gold.  And the reason that’s so fascinating is because the Germans have attempted to get their gold back.  We (the U.S.) promised to send gold back to them but they’ve only received 5 tonnes so far.  I think some people were scratching their heads and asking, ‘Why did Germany only get 5 tonnes of gold after all this time and yet the Dutch suddenly popped up with 122 tonnes?’ (Laughter). So this seems to be adding fuel to the fire in Europe.”

Rule:  “I guess it’s incongruous that the Germans went to get X (amount of gold) and were told 7 years, and the Dutch were able to get their gold.  I’m delighted for the Dutch by the way, but it adds credibility for the demand that the official sector gold holdings be transparent.  It would put an end to all these discussions about wether the gold exists or doesn’t exist.  It would be useful to have an audit trail.

The fact is the Dutch gold belongs to them and the (German and) Swiss gold belongs to them.  And guess what, Eric?  That American gold belongs to us.  And the idea that we have no more rights than the Swiss or the Dutch to know about the existence of our gold or the title of the gold, whether or not that gold has been hypothecated or rehypothecated, is sort of silly.  If nothing bad is going on, it would relive a lot of people, including yours truly, to know that.”

Eric King:  “It’s interesting because Bernanke was being questioned in Congress when there was this push to audit the Fed and he was (essentially) saying, ‘Look, if you come in and audit us and people find out what we are up to there is going to be a collapse of the dollar.’  I think that (he) was alluding to the fact that the U.S. gold is really not there (in the vaults).  The Germans wanted to come into the vault at the New York Fed just to inspect it (their gold), and we held them off and said, ‘No, you represent a ‘security risk,’ we can’t let you in the vault, which is preposterous.  But this idea that the gold is there, I’m bringing this up one more time because your (business) partner Eric Sprott has said a number of times, ‘The U.S. gold is just not there — it’s gone.’  There certainly seem to be countries around the world that are getting very nervous right now that the gold is not sitting in the vault at the U.S. Fed and they are trying to scramble to get their gold (back) before all hell breaks loose.”

Rule:  “It’s just prudent, Eric.  Suppose the gold is there, why should they store it here?  It doesn’t make any sense.  Certainly I’m very familiar with Eric’s point of view.  He was willing in a sort of off-handed way to say (to the U.S.), I’ll show you mine if you show me yours.’ (Laughter).

And Eric doesn’t have quite as much as the U.S. is alleged to have but he’s got a lot of gold. …What’s good for the goose is good for the gander.  If people who are regulated by the U.S. government are forced to submit to audits, why shouldn’t the U.S. government be forced to submit to an audit?  It just makes no sense.” This is an incredibly powerful audio interview from Rick Rule where he continues his discussion on the gold and silver markets.  His outstanding KWN audio interview will be available shortly and you can listen to it by CLICKING HERE.