As The Gold Bull Prepares A Charge To New All-Time Highs, Here Is The Answer To The Question On Everyone’s Mind

As the gold bull prepares a charge to new all-time highs, here is the answer to the question on everyone’s mind.

Gold and rising interest rates
May 7 (King World News) – Alasdair Macleod:  As a consequence of current events, the failure of fiat currencies is increasingly assured. Unlike the runaway inflation in the 1970s which followed the ending of the Bretton Woods Agreement, debt levels are now so high and state intervention in markets so great that hiking interest rates in the manner deployed by Paul Volcker would simply prick the everything bubble. Debt defaults would be overwhelming. Nevertheless, as the purchasing power of fiat currencies continues to slide, higher and higher interest rates become inevitable as markets try to discount yet further declines towards their ultimate valuelessness.

There is a common misconception that does not accord with the facts: that higher interest rates are bad for the gold price. It is assumed by those promoting this nonsense that gold does not have an interest rate and is therefore at a disadvantage compared with fiat money. This is only true of both physical gold and fiat cash to hand, when neither folding notes nor gold pay interest. But both can be loaned and leased to borrowers for interest. It’s just that the interest on ephemeral fiat tends to be higher than on physical gold, because gold is the more stable form of money with no issuer risk.

That rising interest rates on fiat currencies are no deterrent to a rising gold price is confirmed in the chart below, which shows how these relationships evolved in the 1970s. 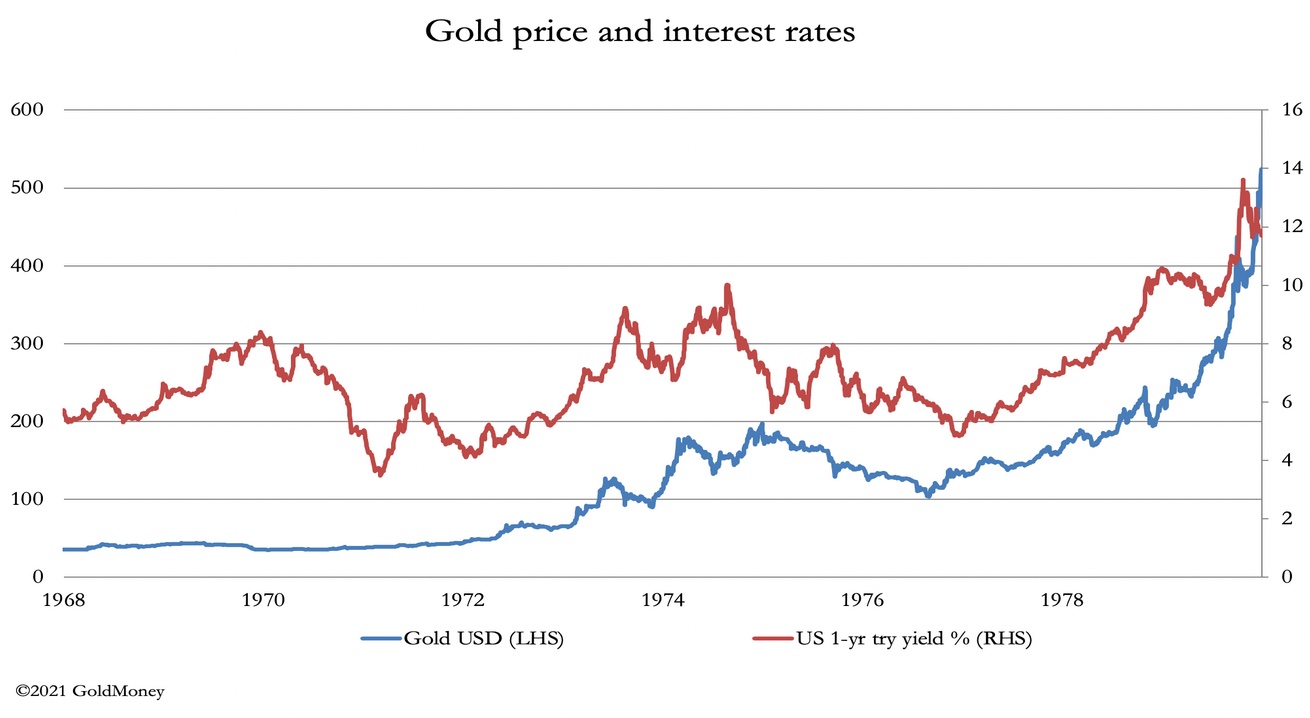 Not only did the decade commence with the yield on the 1-year US Treasury bond at less than six per cent, ending at more than double that, but the gold price rose from $35 to $524 by the end of the decade. Furthermore, the chart shows that from 1972 onwards, gold tended to rise with the yield on the bond and fall with it, defying those who fail to grasp the true relationship.

All this assumes that the collapse of fiat currencies’ purchasing power will take some time. But the truth of the matter is we do not know either the timing or how long it will take. It is unlikely to echo the great European inflations of the 1920s, because to a large degree commerce subsisted on the alternative of gold-backed dollars, instead of local currencies. Today, the collapse of the dollar will mean there is unlikely to be any alternative currency available, because they are all tied to the dollar…

A collapse of financial asset values taking the currencies down with them appears to be more in common with a repetition of John Law’s bubble and subsequent collapse, which incidentally was a forerunner of Keynesianism in action. But a fiat currency going to zero today could take less time, given instantaneous modern communications. In that event, anyone who does not plan to get hold of some physical gold and silver with a high degree of urgency could end up sinking with nothing but valueless fiat currencies.