As the world edges closer to the next crisis, today the man who has become legendary for his predictions on QE and historic moves in currencies, warned King World News that we have just witnessed a global game-changer. 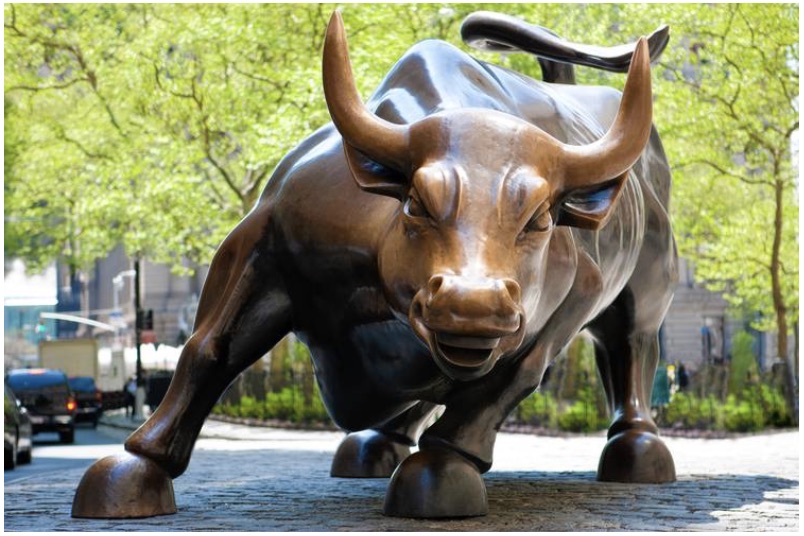 Bulls Are Extremely Dangerous
October 21 (King World News) – Egon von Greyerz:  “Bulls are not killed off easily, They are strong, fierce and have real staying power. And this is what should be expected at a top of a secular bull market. Injured or weakened, the bull will still go on, which is the case with many stock markets. While some markets have peaked globally, others show real strength. A week ago markets were ruffled by major falls. Was that the signal for the end of a multi-decade bull or was it just another brief correction before the bull breaks out to much higher levels?

Let’s first make it clear that the world economy and global stock markets are at the end of the biggest bubble in history. A bubble that was fueled by unprecedented stimulus from central banks and governments to prevent the financial system from imploding…

Egon von Greyerz continues:  “As many of us know, credit expansion is the most effective and inexpensive method to buy votes. And it is the only way to artificially keep the economy going when governments run out of money.

So Are Bubbles
So bubbles can expand a lot more than what people think is possible. Many global markets, like China’s, which is down 25%, have topped. Others like U.S. indices finally look like they have reached the end of the road. Sound investment markets function efficiently based on scarcity of capital. But when capital is endless and can be created at will by a printing press or an electronic entry on a computer, markets are no longer sound, nor efficient. And this is where we are today. There is nothing sound about markets or the economy today. Government and central bank manipulation combined with Algorithmic trading is as far from sound markets as you can get. But this is the sick system that dominates markets today. No ordinary investor can compete against Algo based systems backed by unlimited amounts of capital.

“Algorithms are introduced to automate trading to generate profits at a frequency impossible to a human trader……. Other variations of algorithmic trading include automated trading and black-box trading….. Algorithmic trading rules out the human (emotional) impact on trading activities.” 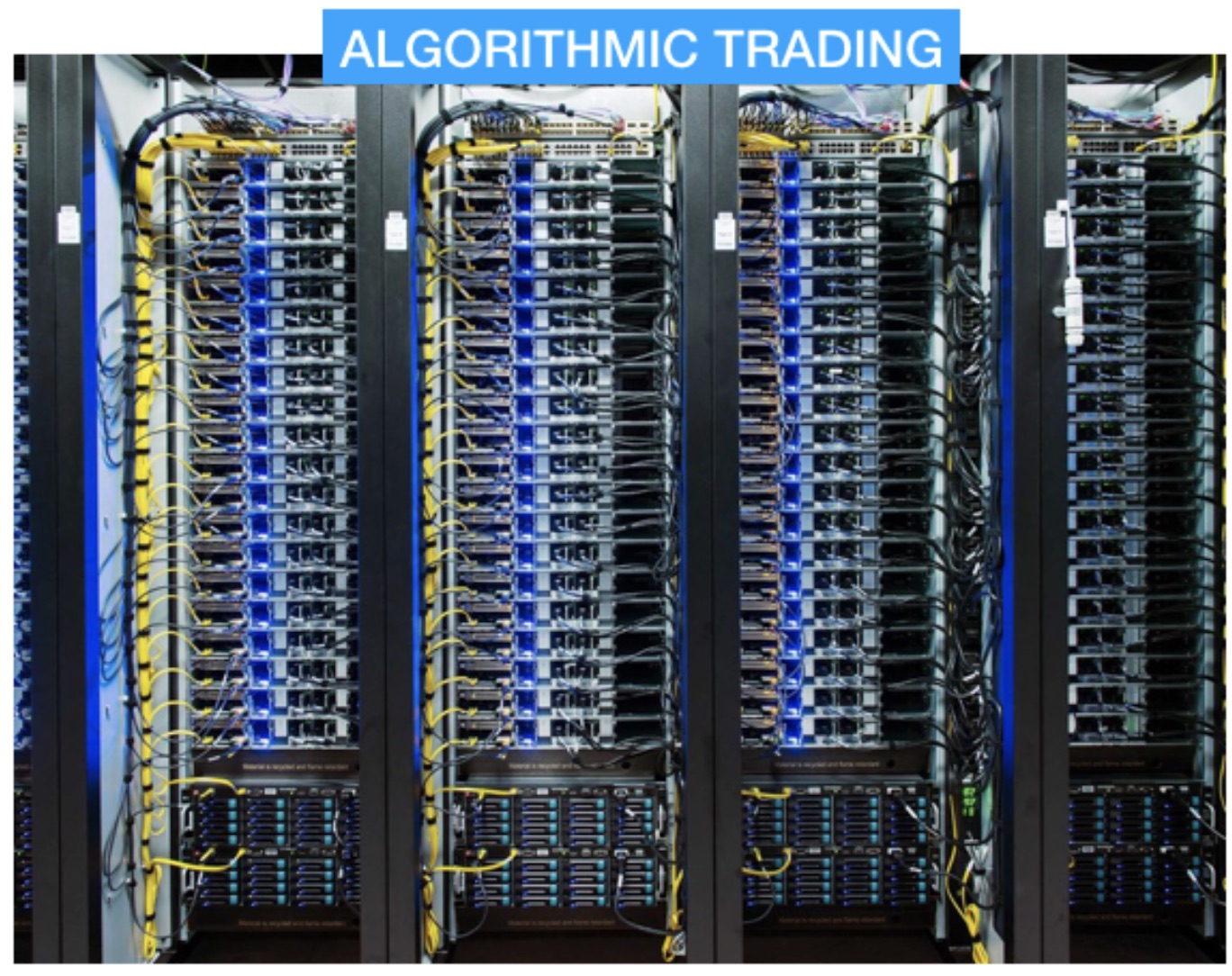 So algos means a system that will always beat a human trader and that will inflict pain. What a painful disadvantage to us mortals. With the odds stacked against any trader without access to massive computer power and even greater capital, it is easy to understand why many investment banks never have a net-loss trading month and often not even a net-loss trading day.

As I have expressed in recent articles, my preferred scenario is that stock markets have now topped and are starting a major secular bear market. As always, there is an alternative scenario which I have mentioned before. Bulls don’t die easily as we saw with the Nasdaq in February of 1999 when it had gone up 7-times since 1990, and seemed massively overextended. That was the time when every single amateur investor, whether they were housewives or petrol station attendants, were all proclaimed tech stock experts. Even in January of 1999 with the massive rise of the market for 9 years, the bull wasn’t giving up easily. In the ensuing 13 months, the Nasdaq more than doubled before crashing by 79%.

Both Scenarios  Will End In Disaster
So the melt-up scenario of Steve Sjuggerud of Stansberry Research is certainly a possibility. Steve has a great track record and he is convinced that for the next 6-12 months we will see a massive final move up in markets, and when it ends it will lead to an even bigger crash. As usual we then have “On the one hand… and on the other hand” as Tevye in Fiddler on the Roof contemplated. What is clear is that both scenarios will end in disaster. The only question is if the inevitable collapse will happen in 6-12 months time or much sooner.

Personally I prefer not to be exposed to the general stock market, except for maybe a small position in precious metal stocks. The really cautious should not be exposed to the fragile financial system either. Banks are unlikely to survive in their present form. They might be saved by massive bail-ins, which means client assets will be confiscated. Also, due to the coming unlimited money printing and debasement of currencies, any money you have in the banking system will become worthless.

You will sleep much better and protect your assets by owning physical precious metals rather than riding a final potential stock market move up. Also, even if the stock market does move up, gold now seems to have finally ended the correction since 2011 and is on its way to new highs and well beyond.

We’ve Just Witnessed A Global Game-Changer
Gold has just had an interesting and also significant confirmation of the bull market resuming. Gold in Chinese yuan has traded in a triangle for 2 years. Some believe that the Chinese have deliberately held the gold price down. Whether that is the case or the tight range is just a coincidence, we don’t know. But what we do know is that gold in yuan has broken out of this 2 year triangle in the last 10 days. This is a very important technical signal and is the likely confirmation that the 19 year old uptrend in gold in all currencies has now resumed. 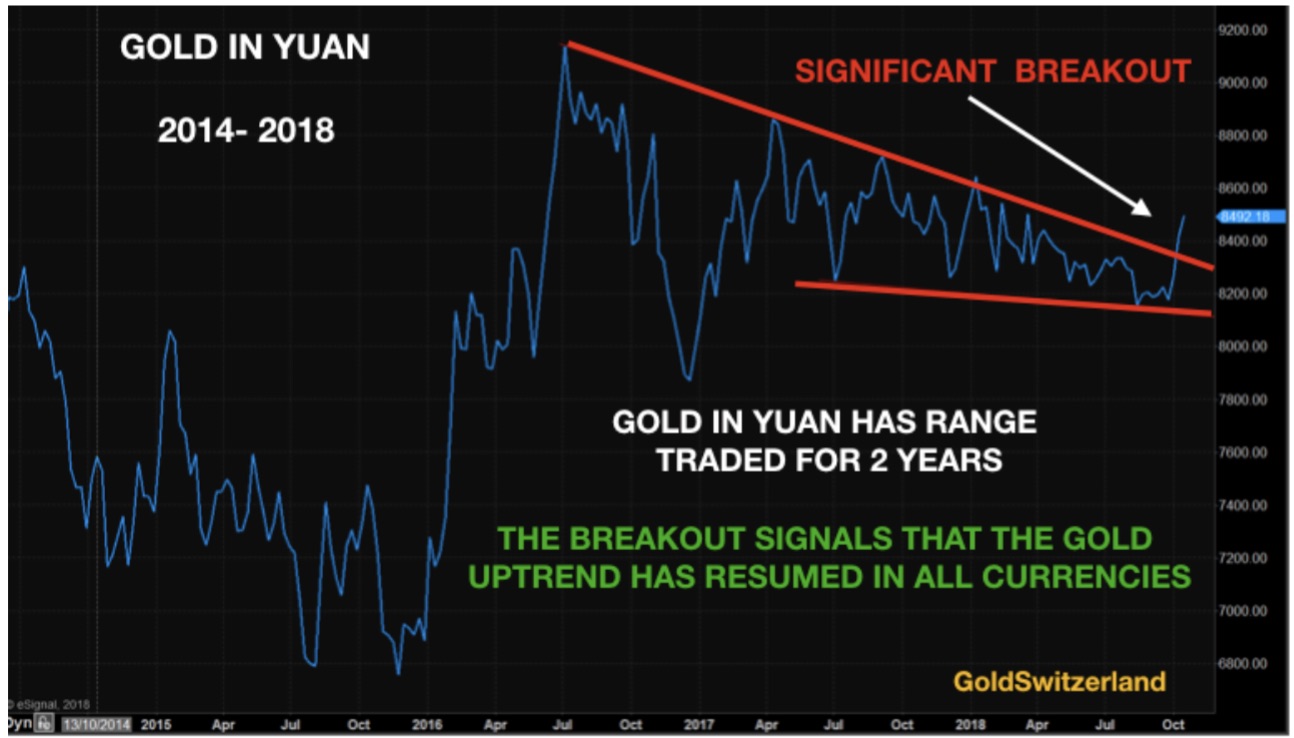 Another strong technical signal is that the Dow/Gold ratio is down 8% in the last two weeks. If this breakdown is confirmed in the next few weeks, we should see the ratio first return to the 6 level, where it was in 2011, and eventually below the 1:1 level in 1980. This means that 1 ounce of gold will buy one Dow unit. Today 20 ounces are needed. 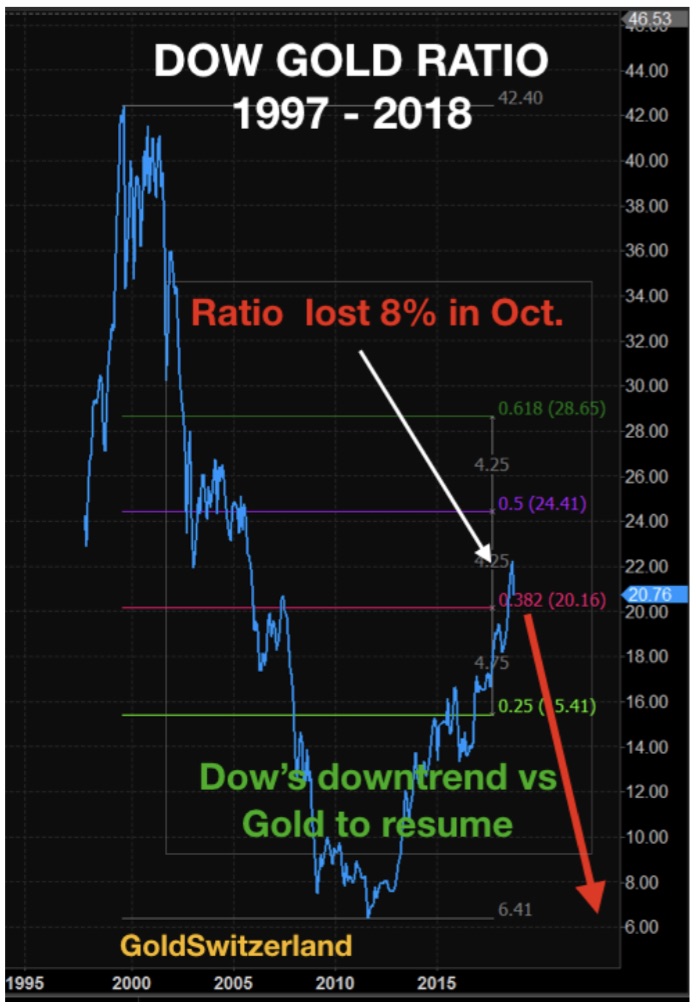 What the chart above clearly shows us is that the Dow has greatly underperformed gold since 1999. In spite of a major rally in stocks since 2009, the Dow is still down 53% against gold this century.

So whether we get new highs in the stock market or not, gold and silver are likely to outperform stocks from now on. There is no better insurance against the massive systemic global risks we are facing, especially In the coming years of wealth destruction.

FreeGold
I am not in favor of a new gold standard but would prefer FreeGold. Otherwise I agree with what Alan Greenspan said in 1966, well before he became Chairman of the Fed:

“In the absence of the gold standard, there is no way to protect savings from confiscation through inflation. There is no safe store of value…….Deficit spending is simply a scheme for the confiscation of wealth. Gold stands in the way of this insidious process. It stands as the protector of property rights. If one grasps this, one has no difficulty in understanding the statist’s antagonism toward the gold standard. A free society needs the rule of gold.”

Adrian Day, Founder of Adrian Day Asset Management, discusses the gold and silver markets and much more and you can listen to it immediately by CLICKING HERE OR ON THE IMAGE BELOW.

***KWN has released the powerful audio interview with John Mauldin and you can listen to it by CLICKING HERE OR ON THE IMAGE BELOW.