Today the man who has become legendary for his predictions on QE and historic moves in currencies and metals told King World News yes, we are at or very near the low for the gold price, but the world is now heading into a time of great tribulation.

Is This It?
February 28 (King World News) – Egon von Greyerz at Matterhorn Asset Management (based in Switzerland):  Well, right on cue, it looks like the endless creation of fake money by the Fed has now poisoned both the stock market and the bond market. The Dow is down 1,000 points (3%) in two days and the Nasdaq down 7% in two weeks.

Gold and silver are also falling in sympathy. This was expected short term, but the outlook for the precious metals look excellent as I will discuss later.

Is this what the 16th century Swiss doctor Paracelsus ordered? It certainly looks like it. He told us that too high a dosage of anything is toxic. And with a world flooded with toxic money with little value, the levels of poison have reached extremes.

The toxic financial system needs to be cleansed but as we have warned many times, this will have dire consequences for the world.

FRANTIC STOCK BUYING BEFORE THE MUSIC STOPS
Buy high and sell low is the mantra of many investors. And as the stock market surges – buy more! And when it falls, buy still more.

But this time, the methods of always being long, which has been fool proof for decades and underwritten by the Fed, will fail hopelessly. Whether investors buy on strength or buy the dips, they will get slaughtered.

As often the case at the end of a cycle, we have in recent weeks seen frantic buying of anything that moves just like with tech stocks in 1999-2000. 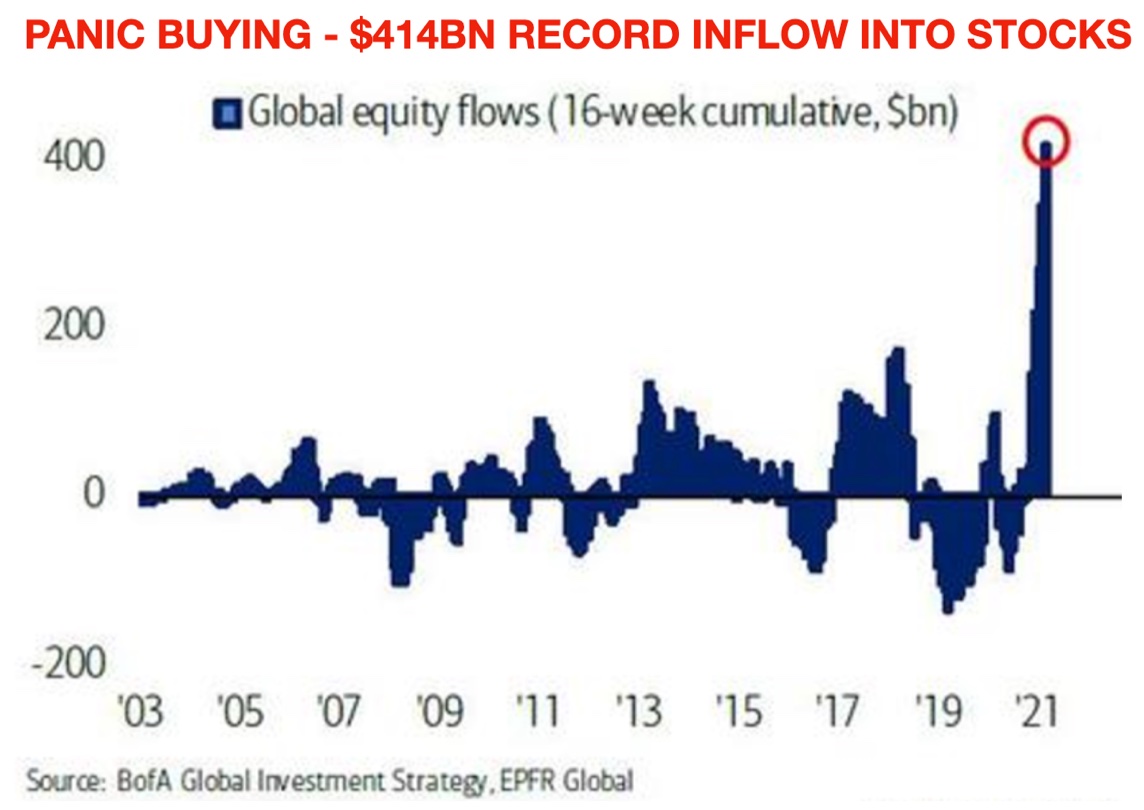 Investors are clearly jumping on the bandwagon just before the music stops.

There are many indicators that point to a market top currently and a secular bear market for many years as I have pointed out in recent newsletters.

The graph below is a clear red flag for stocks. It shows that all the higher highs since October 2017 have not been confirmed by momentum indicators (bearish divergence). So in spite of the Dow having gone up almost 6,000 points since Oct 2017, the RSI (Relative Strength Index) has shown lower tops for each new high in the Dow. That is very bearish.

There are a number of other technical indicators pointing to a top at this time. 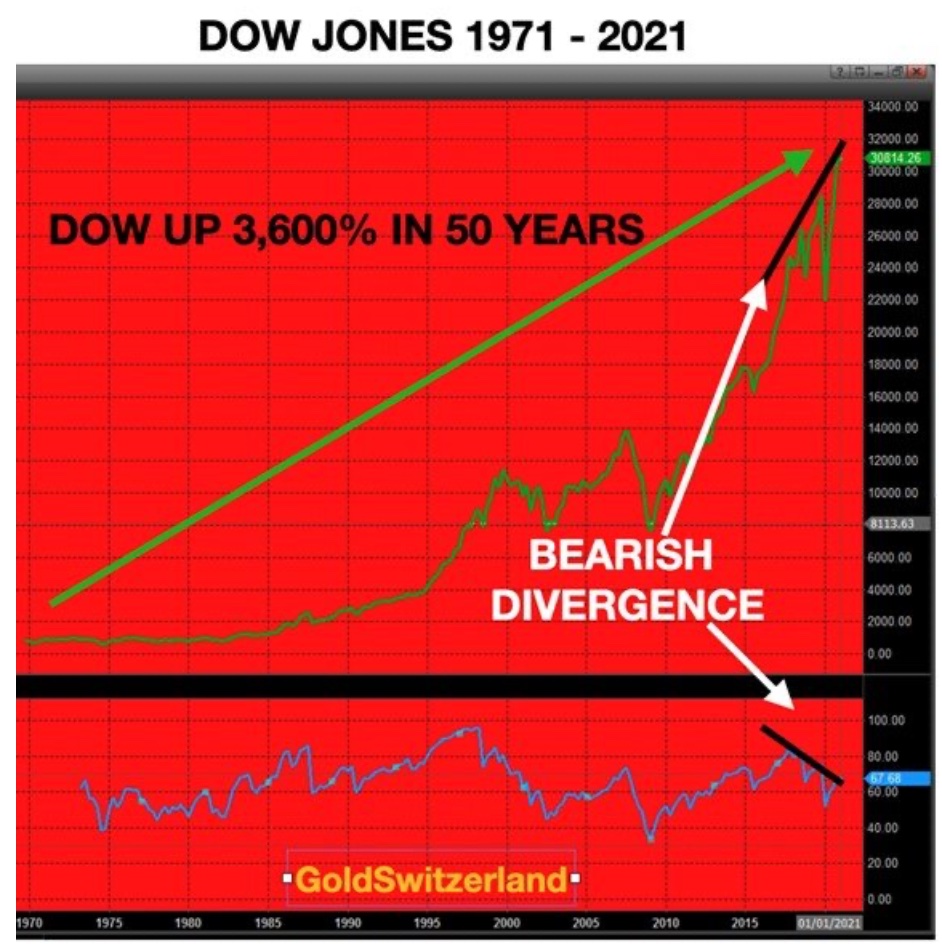 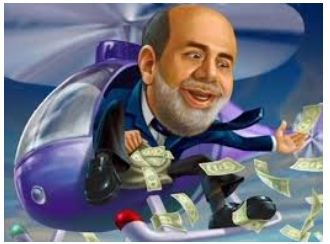 Coming back to toxic speculation, this caused the crash of the sub-prime market in 2006-9 when the global financial system was minutes from implosion. This led to the Great Financial Crisis. But an economics professor from Princeton University, who was chairman of the Fed at the time, “saved the world.” It was Helicopter Ben of course.

But Bernanke didn’t save the world. All he did was to take the orders of his masters, the heads of the major investment banks like JP Morgan, Goldman Sachs and Morgan Stanley. These banks had everything at stake. They were on the verge of bankruptcy and only a massive rescue mission by the Fed and other central banks could save them.

The rest is history. $10s of trillions of loans and guarantees later the US banks and the world were handed a stay of execution. And even that year in 2008, the bankers received the same mega bonuses as the previous year!  Hmmm….

The 2006-9 crisis was never resolved and today, over 14 years since it started, the world is being hit by a crisis which is more than twice as big in debt terms with global debt up from $125 trillion in 2006 to $280t today.

The problem is that as debt has doubled, risk has gone up exponentially. And this time, the old cure of just printing worthless money will have ZERO effect on solving the problem.

But it will lead to the final collapse of the currencies, massive problems in the financial system and hyperinflation…

So Bernanke made it clear that gold is not money. When Paul pressed him, he came up with “it is an asset.”

Ron Paul asks, “So why do central banks hold gold?”

Yes Ben, it is a wonderful tradition that gold has been money for 5,000 years but you don’t even understand it. (EvG’s words).

Bernanke also argues that gold is held as “protection against tail risk, a really bad outcome.”

Bernanke obviously couldn’t tell congress or the world that gold is held as protection against central banks’ mismanagement of monetary policy. Nor did he point out that since 2000, the dollar had lost more than 80% of its value against real money which is gold.

Well Bernanke clearly didn’t teach Austrian Economics (Sound Money) at Princeton. No, he is a true prophet of Keynesianism and MMT (Modern Monetary Theory). He was a clear wizard of money printing and still has the absolute record. During his reign, from 2006 to 2014, he doubled the US debt from $8.5 trillion to $17t.

A remarkable achievement and he didn’t even have to lift a finger!

Yellen took over Bernanke’s mantle at the Fed but wasn’t there long enough to set a record. But now we have the dream team B.Y. (Biden/Yellen) running the US economy.

B.Y. will most certainly print more money than any president and treasury secretary in history and break many records. They have already spent $2 trillion before they started. And that is merely the beginning.

The B.Y. team are no spring chickens and the question is if they last four years. But if they do, they will have increased US debt by many tens of trillions. They will also have crashed the stock market as well as the bond market.

BY BY TO ASSET BUBBLES AS YIELDS RISE
So it will by BY, BY to all these bubble assets that their predecessors have managed to inflate to extremes.

As we enter an era of massive money printing, increasing deficits and debts, there will also be inflationary pressures that will see interest rates increase substantially.

Until now, this is primarily a US problem. As the graph below shows, German and Japanese 10 year rates are rising but still very low with German’s still negative at -0.25% and Japan’s just positive at 0.16%. 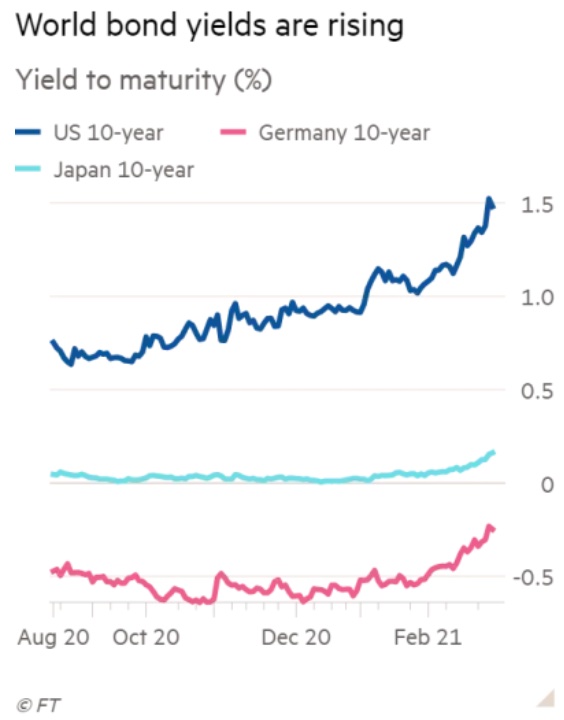 GOLD BULL WILL GET STRONGER
With pressures on stocks and bonds, the precious metals are falling in sympathy as often is the case at the beginning of falling markets.

I have been stating for 20 years, that fundamentally gold and silver are in a very strong uptrend, supported totally by central banks’ destruction of paper money. Within major uptrends, there are always corrections and some are vicious.

If we first look at the 21 year chart of gold, the uptrend is crystal clear and the current correction is part of the pattern. 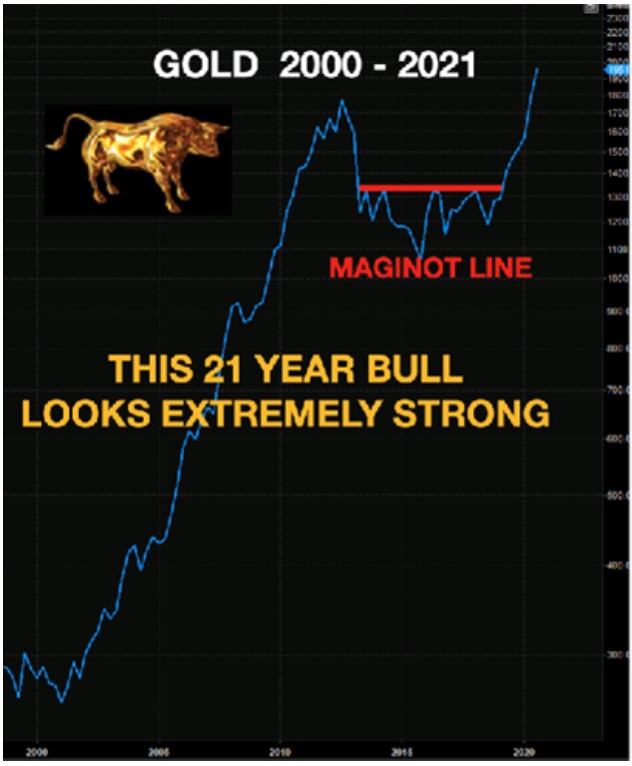 No investment moves in a straight line. And especially not precious metals. Gold and silver prices are determined in a casino of fake paper claims that bear no resemblance to supply and demand of the underlying physical metals.

Gold is currently undergoing a technical correction which I have pointed out for a while. I have also said that we could see $1,700-50. Often prices undershoot in a correction and we might see gold below $1,700 temporarily.

The precious metals often sell off at the beginning of a stock market fall and this is what we are seeing now.

NEGATIVE REAL RATES POSITIVE FOR GOLD
Also, as we have often pointed out and most recently in a MAMChat with Matt Piepenburg and myself, gold and silver generally move up when real interest rates are negative. So it is beneficial for gold when the rate of inflation is higher than the rate of interest. Say interest is 5% and inflation 7%. That gives a negative real return of -2%. Thus this supports a high gold price.

The Real Interest Rate line below shows the difference between the 5 year US treasury and inflation. During the sub-prime crisis in 2008 real rates moved up strongly and gold fell from $1,030 to $680. Clearly a vicious correction, but as real rates fell rapidly, gold rose strongly.

WHAT HAPPENS NEXT?
As interest rates in the US have moved up lately, the negative yield has become slightly smaller and the metals have reacted negatively.

The course of events I see is the following: 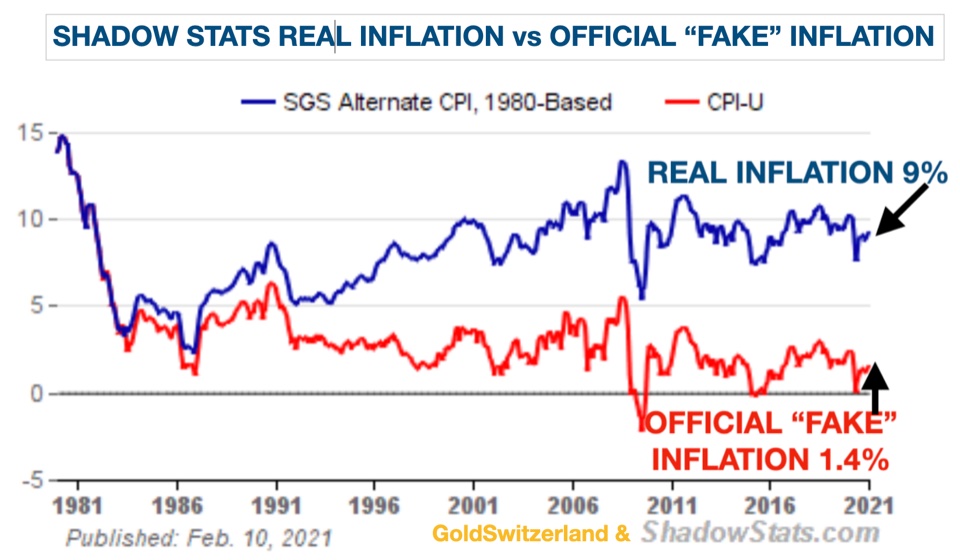 I would be surprised if gold “only” goes up 8X from here in the next 4 years.

But physical gold should not be held as a speculative investment. Gold is real money and the most perfect wealth preservation asset you can hold. 5,000 years of history proves that…This will link you directly to more fantastic articles from Egon von Greyerz CLICK HERE.

Pierre Lassonde shares with KWN listeners around the world his top mining stock pick for 2021 that he has been aggressively buying as well as discussing where the price of gold is headed and why he is so bullish and you can listen to the interview now by CLICKING HERE OR ON THE IMAGE BELOW.