As the world edges closer to the next crisis, today the man who has become legendary for his predictions on QE and historic moves in currencies just warned that the paper gold market is vulnerable. 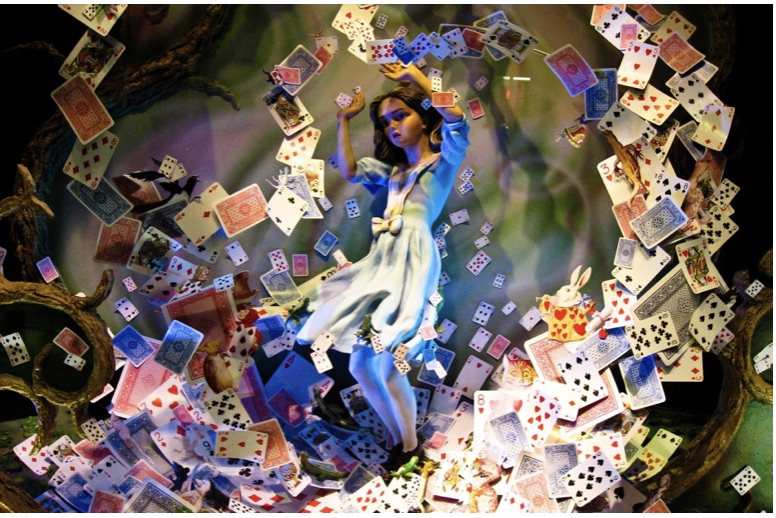 How Far Down The Rabbit Hole?
August 18 (King World News) – Egon von Greyerz:  “How far down the rabbit hole will the world go? It seems that just like in Alice in Wonderland, things are getting more strange by the day. If it continues at this speed, the rabbit hole will soon become a black hole without a bottom…

Bubble bond markets are getting bubblier by the day as the $15.5 trillion bonds with negative rates grow to soon $50 trillion when the US, with its $22 trillion, joins the bond interest rate race to the bottom and below. Most currencies are already almost at the bottom, having lost 98-99% since 1971 and 80% since 2000. Stocks will soon join as they collapse from dizzy heights.

Also strange is that Harry Dent still insists that his $700 target for gold will happen. He has a good track record in markets and therefore has a lot of followers. He argues that gold in US dollars hit resistance at $1,525 which is the bottom of the 2011-2 consolidation after the peak. 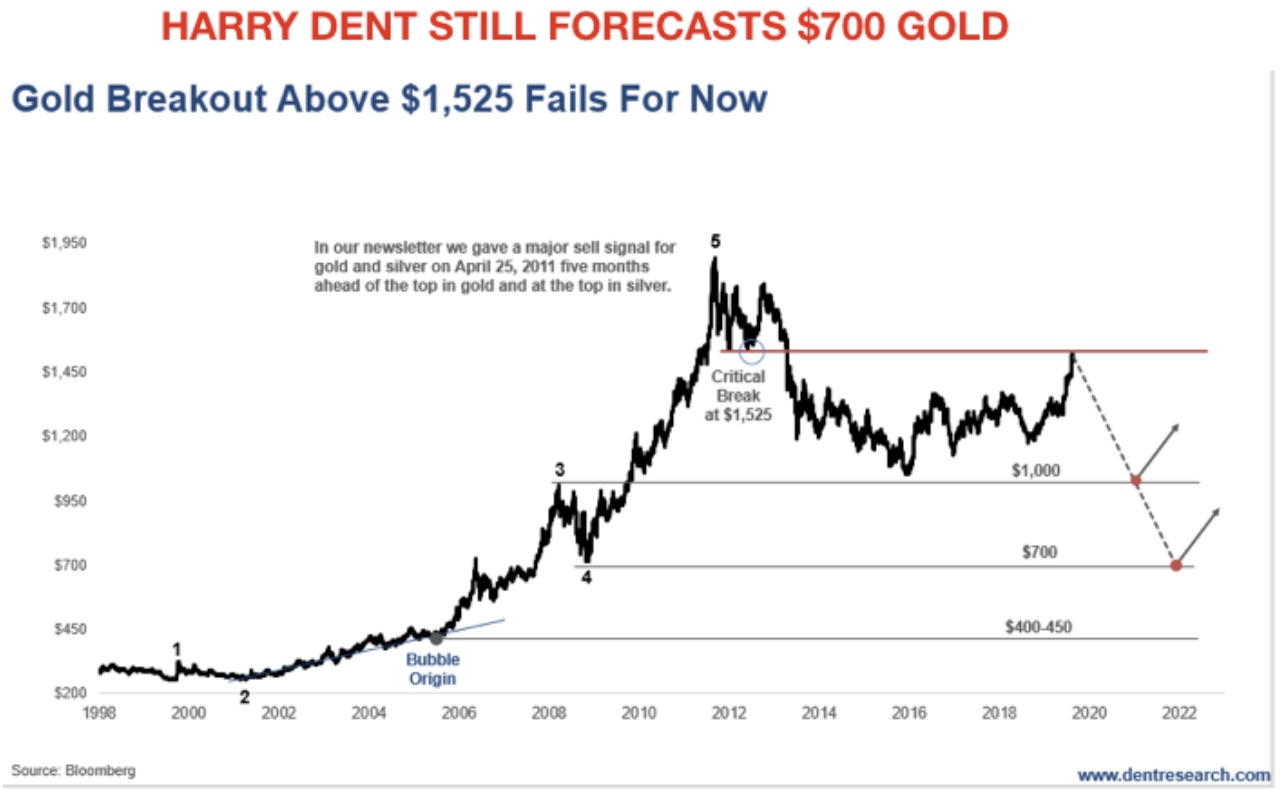 Like many Americans as well as lazy analysts and journalists, Dent believes that the the US is the epicenter of the world. This means that gold should be measured in the most corrupt and overvalued currency in the Western world. The dollar is not supported by one single economic fundamental but only by political and military might. With $22.5 trillion in debt plus another $21 trillion hidden in the Pentagon’s and other expense ledgers, the US most certainly doesn’t deserve to have the world’s reserve currency. And that is likely to end in the next few years as the dollar falls out of bed.

Coming back to gold, it should not be measured in US dollars. Gold is a currency by itself and the only way to measure gold is by its weight. So gold should be measured in grammes or ounces. It is convenient for many people to translate the price of gold to their local currency whether that is pounds, euros, yen or dollars. But converting gold into a currency price is just a translation for convenience and not a measure of its value. As a matter of fact, when you translate gold to, for example, euros or dollars this gives you a clear picture of what has happened to the value of the currency and not to the value of gold.

The table below indicates how much paper or fiat money has lost in value since 1971 and 2000 in various currencies. For example, the dollar has lost 80% since 2000 and 98% since 1971 and the pound 85% and 99% respectively. Thus it is totally false to believe that it is gold that is going up in price when it is the value of paper money which is going down. 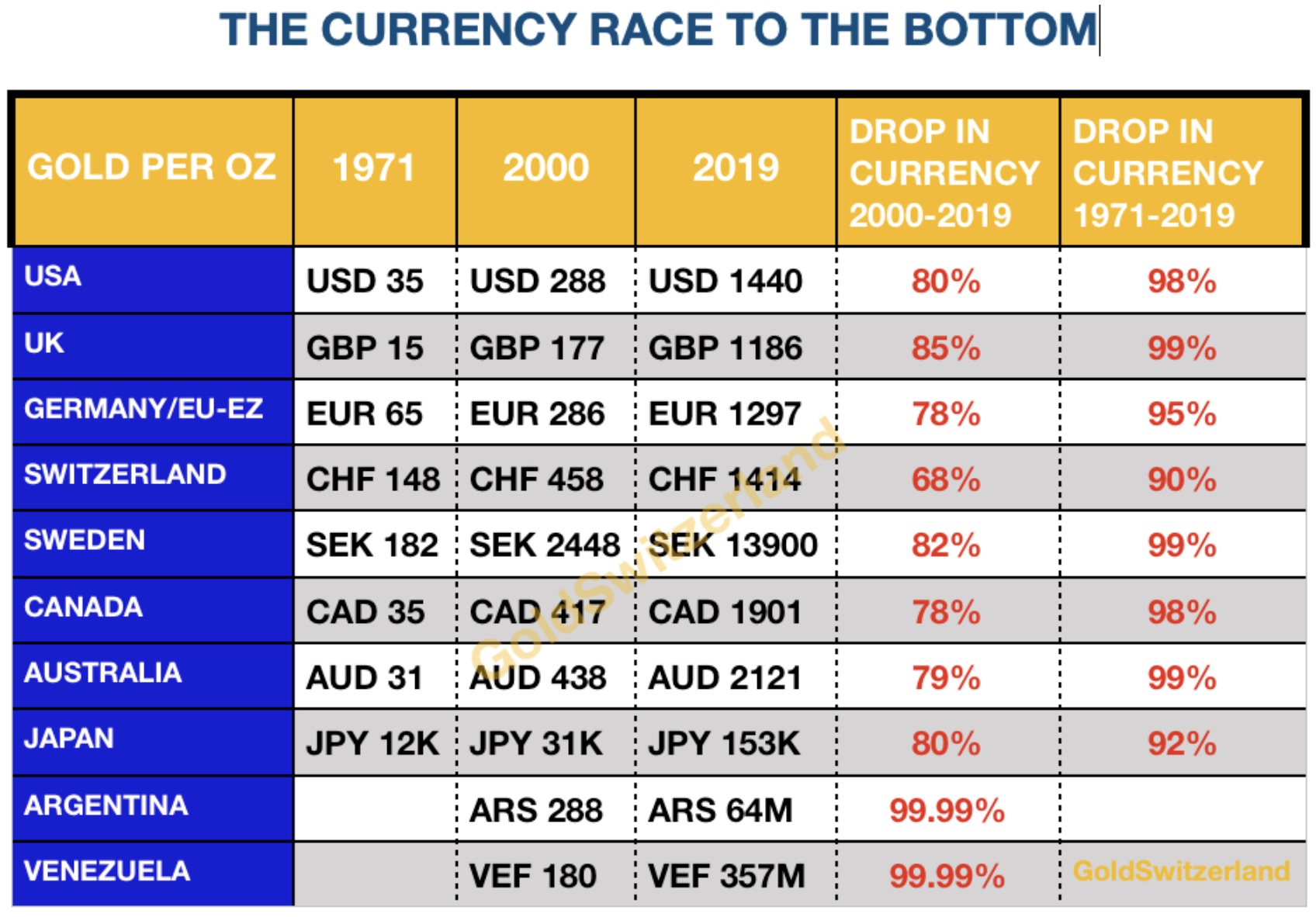 The situation is similar in many things we buy whether it is houses or food. Due to governments’ total mismanagement of the economy, all things we buy go up in price over time. But it is not actually the price which is going up but the value of paper money which is going down because over time, gold’s value is constant. With the exception of regular fluctuations, gold represents constant purchasing power. A good suit for a man has always cost one ounce of gold, whether it is today or 2,000 years ago.

Governments never tell us this. They don’t let us know that by never making ends meet, they must print and borrow money constantly. And when you manufacture money that has zero value, this will automatically make all the money in circulation worth less. When big amounts of money are being printed, the money eventually becomes worthless. And this is where the world is heading now. With most currencies having lost 98-99% of their value since 1971, they will soon lose the remaining 1-2% and become totally worthless.

So to measure gold in one currency is only a convenient way to find out how much that currency has lost in value. But when you go one step further and apply technical analysis to that price move, as Dent does, we must be very careful. By measuring gold in dollars, Dent attempts to prove the point that gold stopped at resistance (see his chart above) and will now weaken to $700.

Conveniently, he is not showing gold in Canadian or Australian dollars or in pounds or in Swedish Kroner or in Euros against which gold has made all-time highs. Nor is he showing gold in Argentinian Pesos against which gold is up 34,000% since 1999. With the Fed now panicking, US interest rates will be cut rapidly to below zero, and unlimited money printing, this will cause the dollar to fall rapidly and thus gold to surge in dollar terms.

The Fallacy
The fallacy in Dent’s argument is that gold has found resistance in one particular currency and will therefore crash. My point is that gold has made new highs in dozens of currencies so the resistance measured in US dollars is irrelevant and will represent no obstacle at all for gold. Gold will soon blow through the $1,525 Dent resistance and later the high at $1,920.

As predicted, gold broke the Maginot Line at $1,350 in June and has made a $250 move since June 1st. Bearing in mind the sideways gold market in the last six years, this is quite a remarkable 20% up-move. But it is just the beginning. Based on technical indicators, gold should continue to $1,650 to $1,750 without a major correction. That move could start as early as next week and take no more than 3-8 weeks.

At the same time, we are likely to see the first big move in silver. For a while I have stated that we could reach $25 very fast. I wouldn’t be surprised to see silver get close to that level in the next couple of months. I do realize that making these forecast is a mug’s game but the long term oversold position of  silver and the pent-up energy could easily make silver explode over the next few weeks.

When The Global Bubble Bursts
When the current global bubble bursts, it will be triggered by one specific event, even if that wasn’t the actual reason but just the catalyst. For example, the fall of Lehman in 2008 was such an event although it wasn’t the reason for the 2007-9 financial crisis.

The underlying reason for the current bubble will of course be the $250 trillion debt plus the $1.5+ quadrillion derivatives and global unfunded liabilities of at least $250 trillion. So a neat little sum of more than $2 quadrillion. Imagine the money printing required to stop that bubble rupture.

During the final phase of a bubble era, many companies will massage or cheat in their accounting. The fall of Enron or Madoff were examples of companies cooking the books on a major scale. The whistleblower for Madoff was Harry Markopolos but for years everyone ignored his warnings. Markopolos has now gone public on an alleged accounting scandal at GE. He claims that GE has taken $38 billion long term deferred income upfront and that this sum is only the tip of the iceberg. Time will tell if Markopolos is right once again. But what is certain is that we will see a lot of “creative” accounting or fraud which will be discovered in coming years.

So we could soon see a situation like GE becoming the trigger for the bursting of the current financial bubble. But more likely is probably a bank failing. We have discussed previously the precarious position of Deutsche Bank. The stock market has clearly identified Deutsche as a basket case. But the stock price fall of Commerzbank, the second largest bank in Germany, is even worse. While Deutsche is down only 94% since 2007, Commerzbank is down 98.4%. 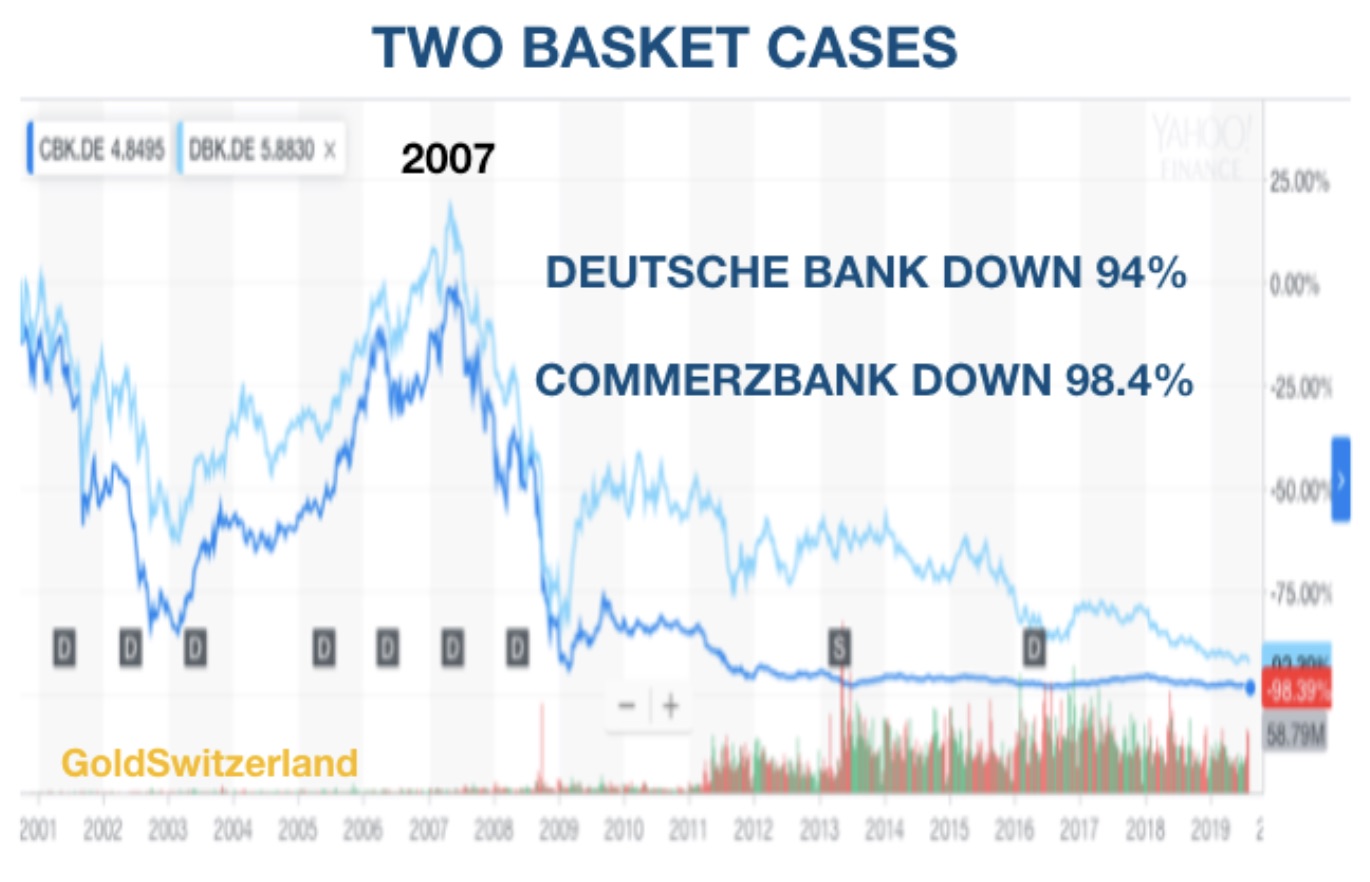 The Bundesbank and the ECB will have to print an awful lot of money in a futile attempt to save these banks. It could easily be in the €10s of trillions. In relation to the German GDP of €3 trillion, it will create Weimar II, which means massive hyperinflation.

Venezuela is currently suffering from economic collapse and hyperinflation. But Argentina is not far behind with gold jumping from 65,000 pesos to 85,000 last week as the currency fell 25%. 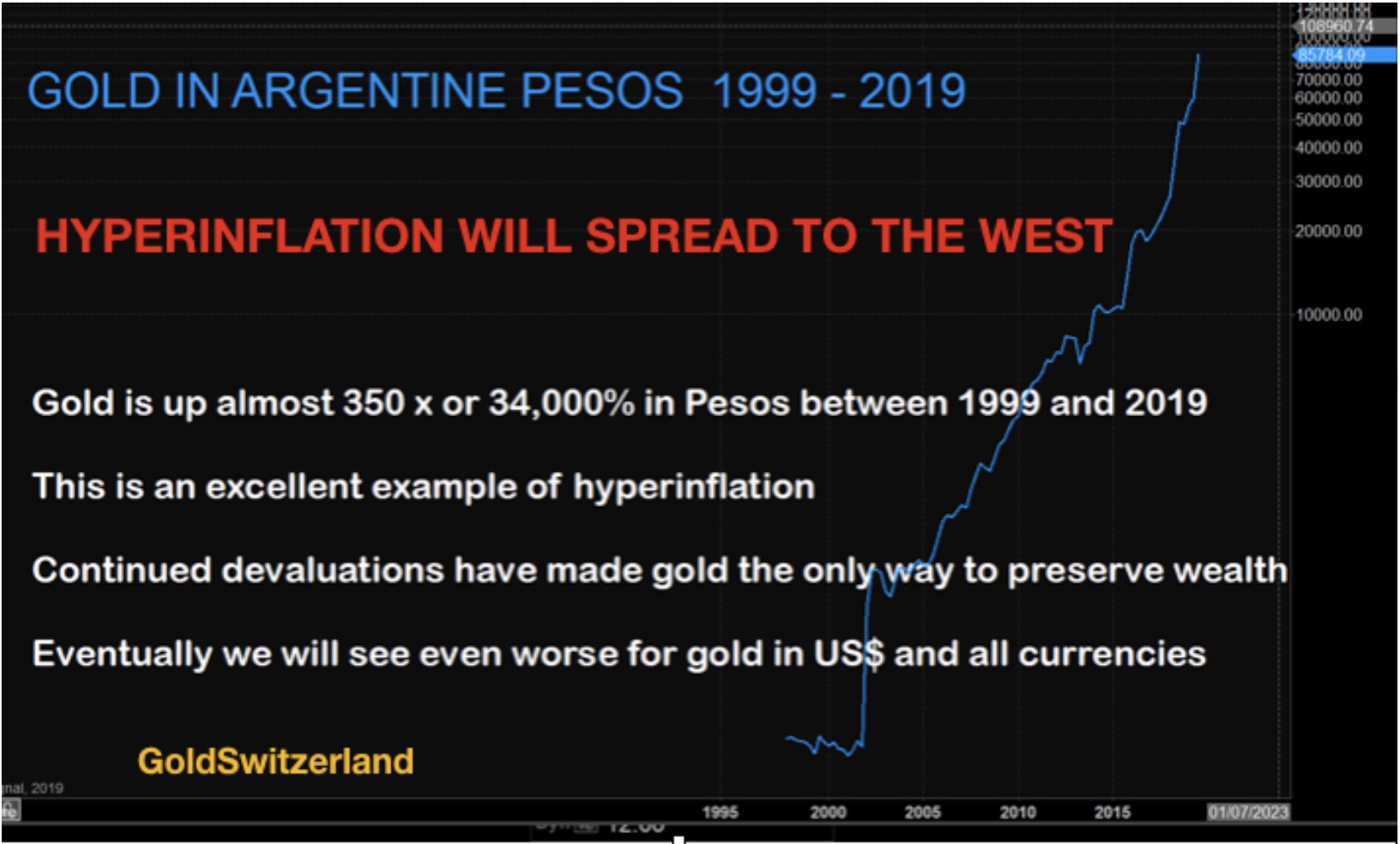 Gold in Euros or dollars could easily reach similar levels as hyperinflation takes hold in the West.

Swiss Gold Refiners – Slow Business And High Stock Levels
Finally, a very important message about the physical market. All the Swiss refiners are reporting very slow business and much higher stock levels than normal. The Chinese and Indians are currently buying very little. In Thailand and Indonesia, people in the local market are taking profit and selling.

So the run-up that we have seen in gold in the last 10 weeks is certainly not linked to physical demand at a high level. Our company is seeing, and others in a similar position, good physical demand from wealth preservation investors. But that obviously doesn’t make up for the drop in demand from China and India. Thus, this recent $250 price increase has come primarily from the paper market. ETFs have also been increasing their holdings but we can never be certain that they are actually buying physical gold.

Paper Gold Market Vulnerable
So we normally connect gold going down to paper market selling but we are now seeing the paper market also driving the price up. This could be seen as a negative in the short term, since paper buyers are not long term holders. But there is, of course, nothing stopping the paper market taking gold and silver a lot higher before a correction. That price move is actually likely as I have indicated above.  And a higher price can easily attract higher demand for physical.

But investors buying physical gold for wealth preservation purposes should not be concerned about these short term anomalies in the market. Global risk is greater than ever and owning physical gold and some silver is the best life insurance you can hold…For those who would like to read more of Egon von Greyerz’s fantastic articles CLICK HERE.

KWN has just released the powerful audio interview with Rick Rule where he discusses chaotic global markets and what investors need to be doing right now, plus what he expects next in major markets, including gold CLICK HERE OR ON THE IMAGE BELOW.

BUCKLE UP: End Game Of The 48 Year Experiment…It’s All About Confidence, More Interventions Coming CLICK HERE TO READ