As the world edges closer to the next crisis, today the man who has become legendary for his predictions on QE and historic moves in currencies, told King World News that the world is about to face another Lehman moment.

So Many Catalysts Could Shake The World Economy
July 1 (King World News) – Egon von Greyerz:  “Can investors really be that wrong? Today global risk is greater than at any time in history, and at the same time, the great majority of investors show no fear at all. There are so many potential catalysts that could shake the world economy out of its sweet dreams into a living nightmare. It is impossible to forecast where the trigger will come from. It could be a debt collapse in Japan, China, USA, Eurozone or emerging markets. Or it could be a currency collapse in any of those regions. Or it could be a stock market collapse, or it could be …, or it could be …

Egon von Greyerz continues:  “Many stock markets around the world are at all time highs. But there is no fear and no serious selling. Any slight decline is treated as a buying opportunity. The S&P is up 4x since 2009 but that does not make investors nervous. That markets have been fueled by dangerous and unsustainable credit expansion does not concern investors either. Not even the fact that global debt has doubled since 2006. But change starts in the periphery where very few are looking. Look at China, where the Shanghai composite is down 22% in 2018. And look at Brazil, where the Bovespa is off 17% so far this year and Turkey, which has lost 20%.

What is important to understand is that most major markets are now looking extremely vulnerable, be it Japan, Germany or the US. Fundamentally most markets are overvalued with the help of central bank liquidity, and technically we are not far from crashes in most markets. While there is always a possibility of a last hurrah, it looks like all markets have topped, including the US, and that later in 2018 we will see major declines. Once the bear markets start, they are likely to turn into secular trends that last many years, and will result in declines of 75% to 95%. That is difficult to believe for most investors today, but nobody in 1929 believed that the Dow would fall 90% in the ensuing years and take 25 years to recover.

The investment world has been lulled into a permanent state of security and euphoria. Nobody can deny that central banks and governments have been extremely skillful in telling the world constant lies. And why would anyone protest, as the rich are getting incredibly rich and many normal people in the West have a higher standard of living than ever? Very few of the “normal people” understand that their prosperity is built on personal debt and their government borrowing. Nor do they understand that they are responsible for this debt that they of course can never repay it.

Even less do they understand that they will be on their own when debt implodes and they lose their jobs. Because the state will, at that point, have run out of money and there will be no social security or unemployment benefits. Nor will there be any pension for the retirees as pension funds will go from extremely underfunded to totally unfunded.

When Trump was elected in November 2016, I forecast that US debt would continue to double every 8 years on average, as it has done since Reagan become president. That would lead to $28 trillion in debt by 2021 and $40 trillion by 2025. 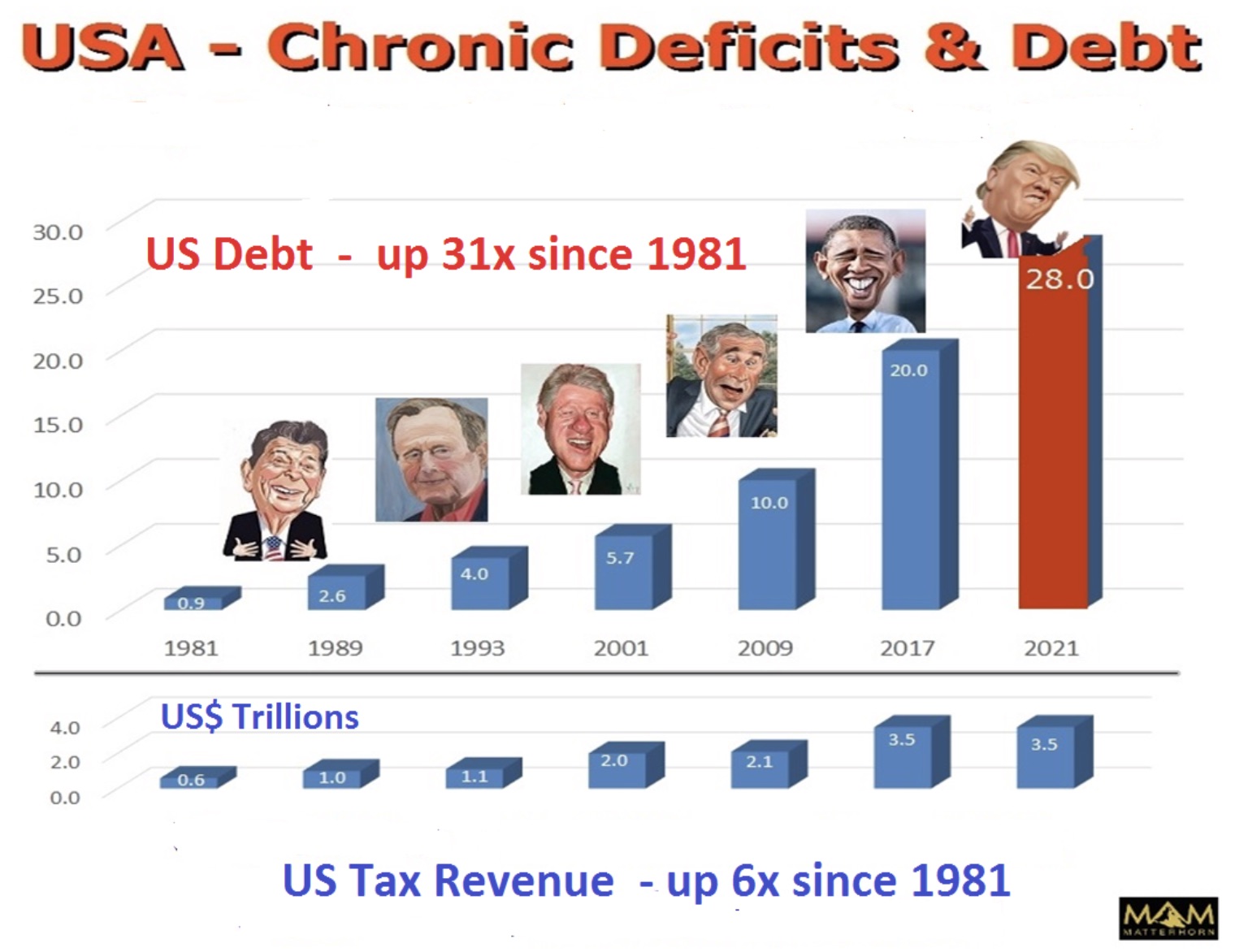 Well, it seemed quite unrealistic back in 2016 that the US would average over $2.5 trillion deficit in the ensuing 8 years to 2025. Judging by current forecasts, it looks like debt will “only” be $25 trillion in 2021. But as tax revenues decline and spending increases, I would not be surprised to see $28 trillion debt in 2021. That would put the US on course for a $40 trillion debt in 2025. That would mean a doubling of the debt from 2017, which is in line with the historical trend of a 100% increase every 8 years.

A $40 trillion debt in 2025 would be bad enough but things are likely to get worse. With debt exploding, the Fed will lose control of interest rates as foreign investors dump US bonds. A rate of 10% at that point would not be unrealistic. That would lead to an interest bill of $4 trillion per year (10% on $40T). This would mean that just interest costs are likely to be higher than total tax revenue.

So the US is on the cusp of a deficit and debt explosion of catastrophic proportions. And this forecast does not include major problems in the financial system, leading to additional money printing as well as a collapsing dollar. With the US by far the biggest threat to the global economy, the world focuses on the problems in the EU. Yes, there are major problems in Greece, Italy, Spain and many more European countries as well as in the European banking system. But relatively, the fiscal discipline in the EU is far more disciplined than in the US. Just look in the chart below at the Eurozone austerity compared to the US profligacy. 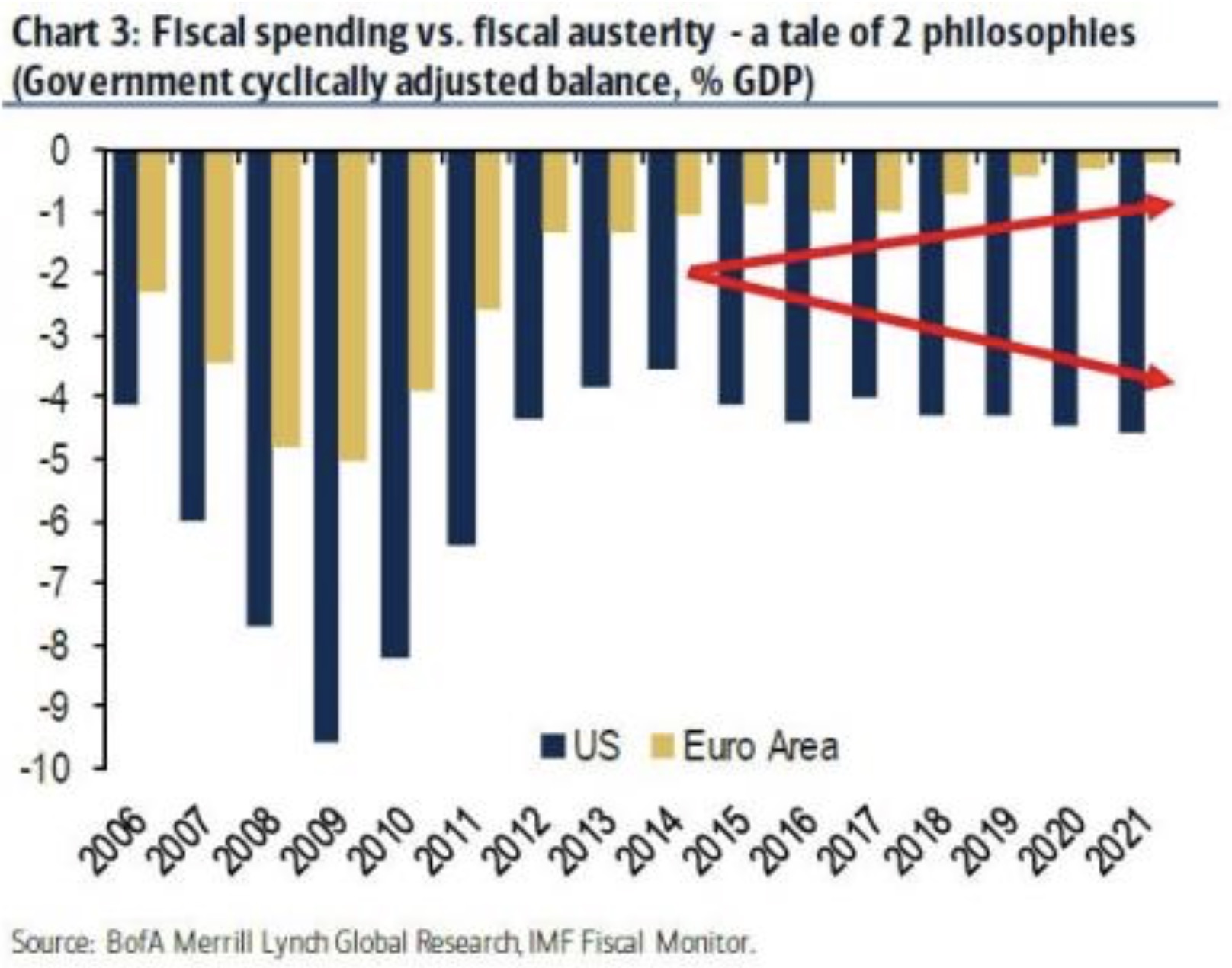 While the US deficit is forecast to continue at around 5% of GDP, the Eurozone is running at 1% or less. There is a consensus that many of the Eurozone countries are basket cases and that is hard to argue against. Very few talk about the US as a basket case. But with no real budget surplus since 1960, the US financial and military hegemony will soon come to an abrupt end, especially since deficits are likely to increase further in the next few years. So as the currencies continue their race to the bottom, (see last week’s KWN article), the US dollar is likely to beat the Euro to zero. But it really doesn’t matter who will be first too the bottom in a race that only has losers taking part. 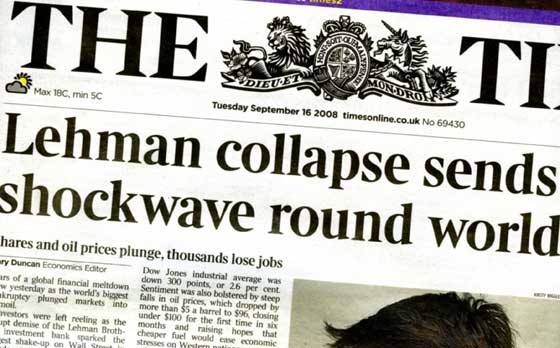 The World Is About To Face Another Lehman Moment
Another potential catalyst could be one of the world’s biggest banks, which has a balance sheet and share price that look extremely ominous. Deutsche Bank (DB) has fallen 90% from 2007. The chart looks very similar to Lehman in 2008 just before it collapsed. 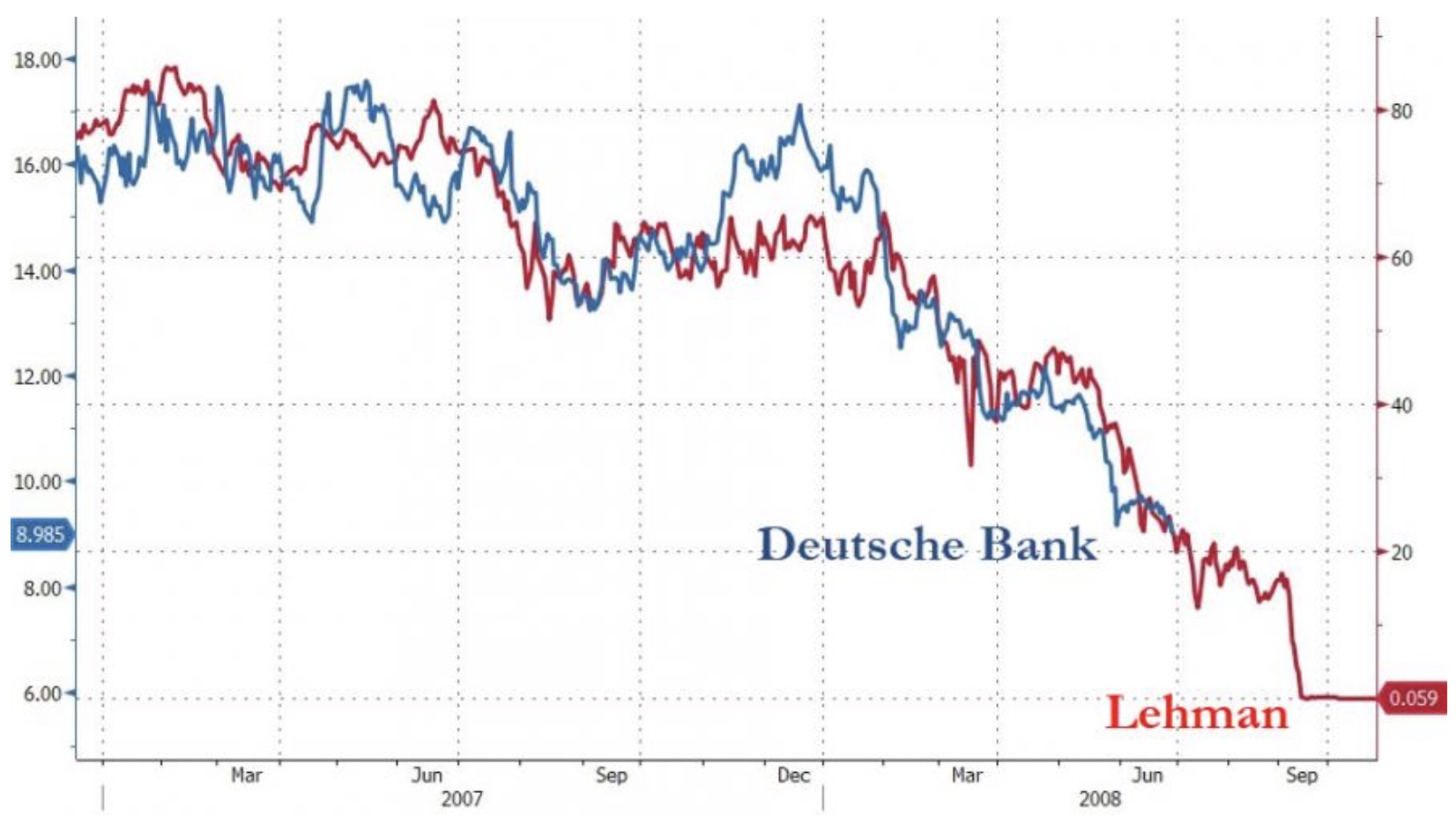 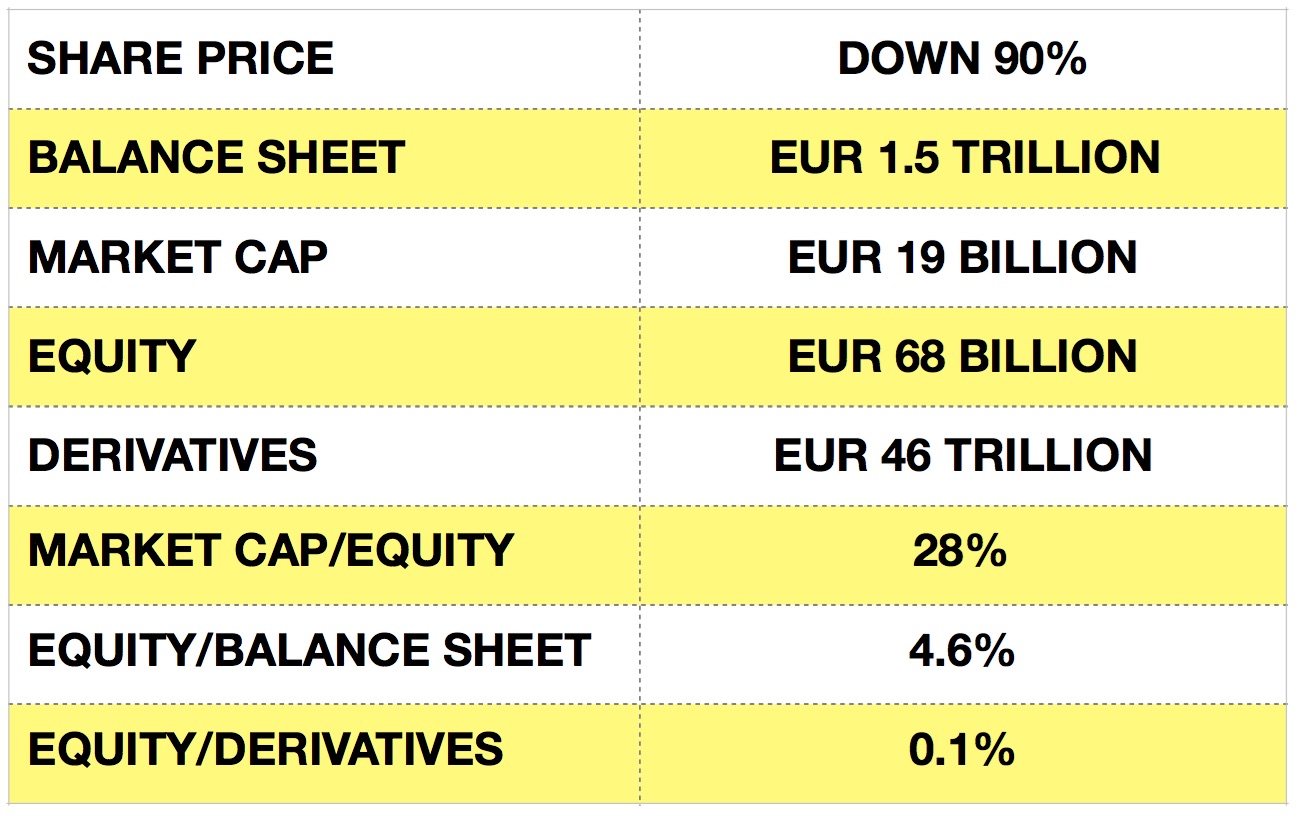 The market clearly sees the writing on the wall. The share price only needs to drop another 10% from the top to go to zero. That is why no one believes that DB is even worth the equity as the market cap is only 28% of shareholders’ funds. A 4.6% loss on the DB loan book or a 0.1% loss on the derivative portfolio would totally extinguish the equity. Both of these events are very likely to take place within the next few years.

Since DB is part of the establishment, the German government would do everything within its powers to save the bank. But how can they save a bank with a balance sheet of 50% of German GDP and a derivative portfolio of 14x GDP? Well, they can’t but they will probably try. And the consequences are very clear: Welcome to Weimar II.

But no one must think that DB is the only bank in trouble. JP Morgan, for example, has $50 trillion in derivatives, which totals 2.5x US GDP. And the Swiss banking system is 5x Swiss GDP. The fractional banking system is soon coming to an end with the most massive bang. Holding physical gold seems like an excellent idea!” For those who would like to read more of Egon von Greyerz’s fantastic articles CLICK HERE.

To listen to the powerful KWN audio interview with Bill Fleckenstein CLICK HERE OR ON THE IMAGE BELOW.

KWN has also released the powerful audio interview with Gerald Celente discussing what will cause the price of gold to soar, the top trend for the back half of 2018 as well as what surprises to expect and you can listen to it by CLICKING HERE OR ON THE IMAGE BELOW.

ALSO JUST RELEASED: Will This Really Unfold? The Call For A Terrifying Stock Market Collapse Where They Have To Halt Trading CLICK HERE TO READ.