Today the man who has become legendary for his predictions on QE, historic moves in currencies, warned King World News that the elites are about to make their final move against humanity.

Debt Slavery
Egon von Greyerz:  “Over the last 150 years, the West has gone from human slavery to debt slavery. Slavery was officially outlawed in most countries between the mid 1800s and early 1900s. In the British Empire, it was abolished in 1834 and in the US in 1865 with the 13th amendment…

Egon von Greyerz continues:  “But it didn’t take long for a different and much more subtle form of slavery to be introduced. It started officially in 1913 with the creation of the Federal Reserve Bank in New York. More than 100 years before that, the German banker Mayer Amschel Rotschild had stated:

“Give me control of a nation’s money and I care not who makes its laws.”

The bankers who gathered on Jekyll island in November 1910 were totally aware of the importance of controlling and country’s money and that was the objective of their infamous secret meeting which laid the foundations to the Fed. The Fed is officially the Central Bank of the USA but it is a private bank, owned by private banks and for the benefit of private banks and bankers. 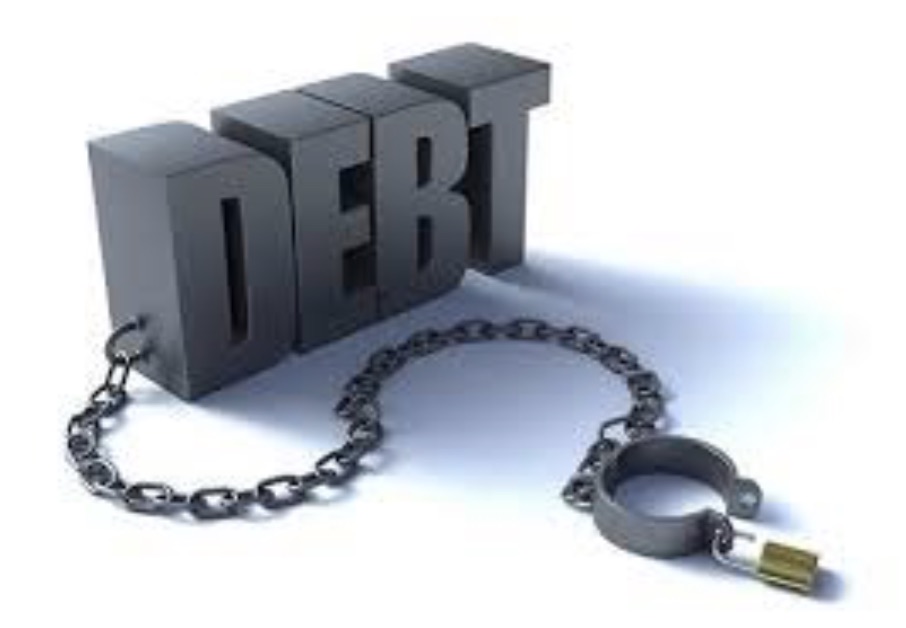 So the Western world was free from human slavery for around half a century but is now subject to a form of slavery which most people are unaware of. It is a slavery which no law, no regulation or edict can abolish. Nor are there any magic financial tricks that can make this form of slavery disappear. I am of course talking about debt slavery, which has gradually taken hold of the West in the last hundred years and now is enslaving many emerging market countries. There is mortgage slavery. The word mortgage comes from Latin and French and means death pledge. And this is exactly what it will be for a lot of people who will neither afford the coming increase in interest rates nor the repay the capital on their property which will collapse in value. We also have credit card slaves, auto loan slaves and student slaves. Virtually all of these loans will expire worthless as the enslaved borrowers default.

In 1913 global debt was negligible but grew steadily to 1971 when Nixon abolished the gold backing of the dollar. Since 1971, the debt enslavement has taken off at an exponential rate. Just looking at US total debt, it was $1.7 trillion in 1971 and is now $67 trillion. At the beginning of this century US debt was “only” $30 trillion, so just in the last 16 years it has doubled.

Debt slavery is now a chronic condition which the world faces. The word debt has the same roots as death and clearly has very dark connotations. Slavery means being owned and controlled by someone. What the bankers started on Jekyll Island has now enslaved the world in a debt/death grip from which there is no escape. 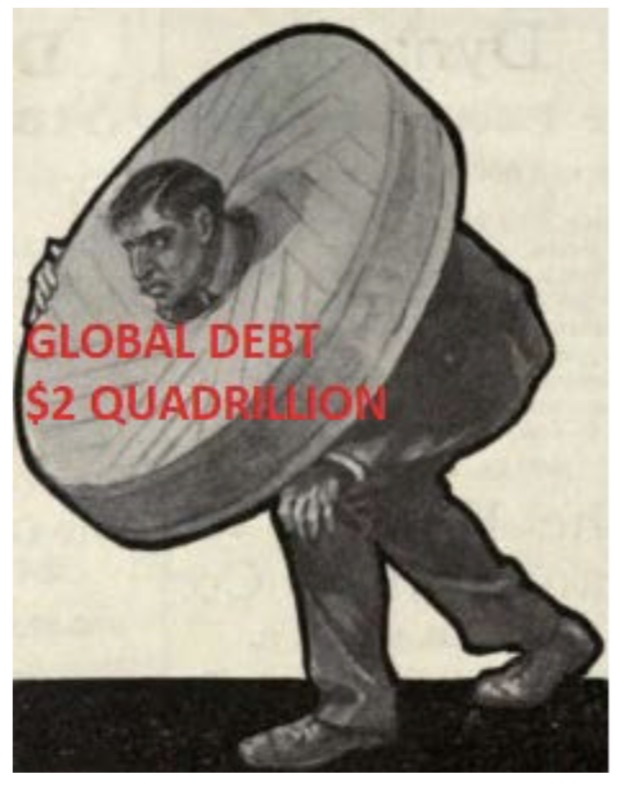 Global debt of $230 trillion, plus unfunded liabilities and derivatives, takes us to over $2 quadrillion debt and liabilities, and that is just too massive a weight to get rid of.

So how does the world attempt to solve this debt/death trap? We can of course ask Nobel prize winner Krugman and he will give us the Keynesian solution, which the world has applied for 3⁄4 of a century with catastrophic consequences – JUST PRINT MORE MONEY! 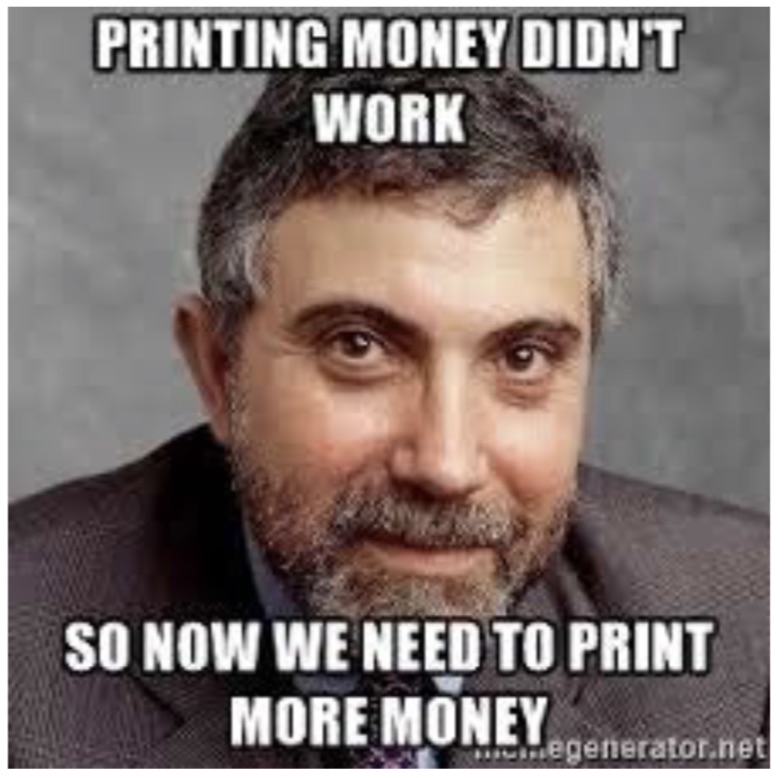 Money printing has created a massive debt problem, more printing exacerbated it, and even more has simply postponed the inevitable collapse. Any further dose of this poisonous medicine will be like pushing on a string – it will have zero effect as a remedy, but instead as a disastrous effect when it comes to the destruction of money. And this is of course what is likely to happen in the next few years. I have for many years been clear that massive money printing is the only tool that central banks have left. This will lead to hyperinflation, the total destruction of paper money and to a deflationary asset and debt collapse. Only after that can the world grow again, but before that there will be a lot of pain in the world.

The Elites Final Move To Enslave Humanity
The powers that be have not been satisfied just to enslave the world with debt. People must also be prevented from spending whatever money they have left. The banning of cash transactions and withdrawals is growing. In many European countries, the cash limit is between 1,000 and 3,000 and euros. But that is just the first step. Sweden, for example, has virtually abolished all cash transactions. Many retailers only take credit cards. New bank notes have also been introduced making the old ones unusable. This is similar to India and a way of punishing the holder of cash and confiscating money. 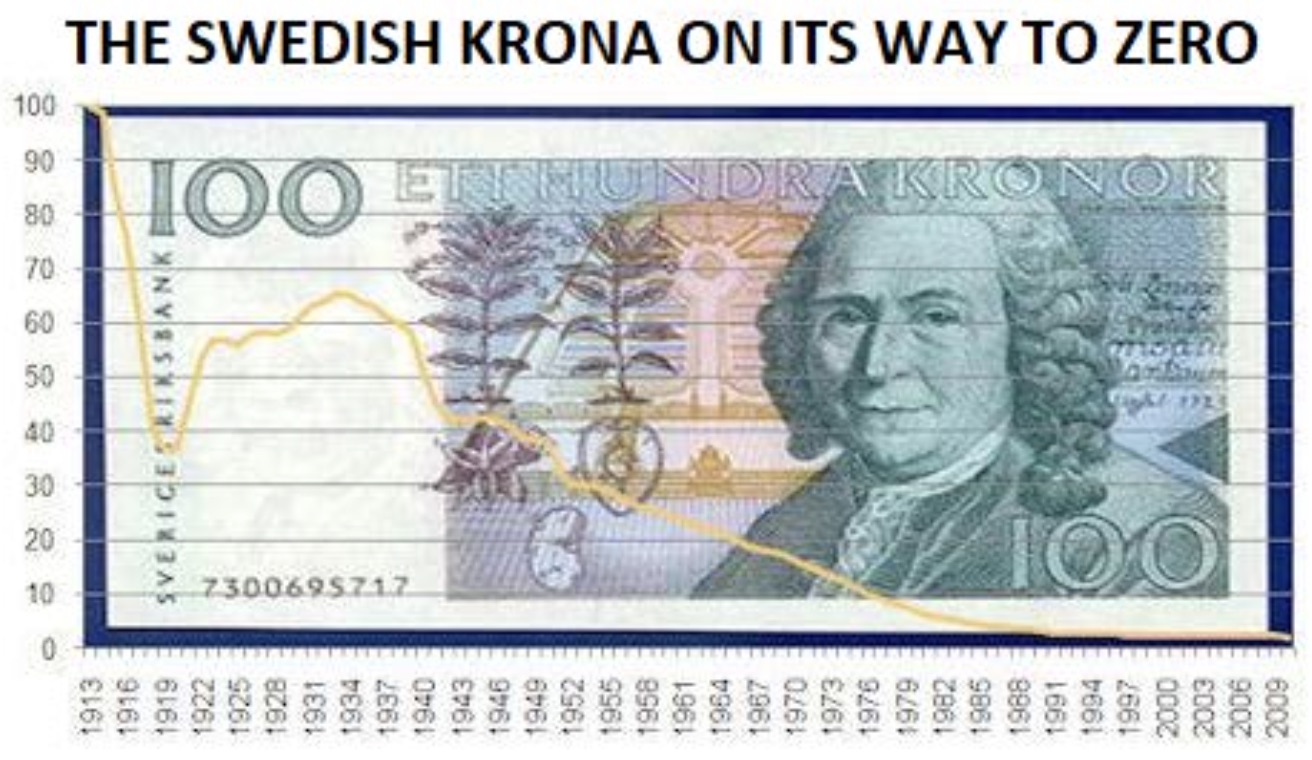 Sweden has also made the few remaining coins look like cheap plastic monopoly money. One Swedish Krona used to contain 80% silver until 1942. Then it was reduced to 40% silver until 1968. After that there was no silver content but only copper and nickel. The latest Krona introduced 2016 is made of steel with a copper plating that quickly wears off. It is also much smaller and half the weight of the previous one. Well, nothing changes in the world. The Romans experienced exactly the same between 180 and 280 AD when the Denarius went from almost 100% silver to 0%. The Krona has like all other currencies lost 99% of its value in the last 100 years. So only 1% to go until it is worthless. This will of course happen to the Krona like all other currencies.

The first reason for abolishing cash is to have total Big Brother control of the people’s spending and tax compliance. Remember that most countries had no income tax 100 years ago. In the US, for example, income tax was first introduced in 1913 (same year as Fed was created). The tax rate was 1% for income above $3,000 for individuals and $4,000 for couples. Above $500,000 income ($11m today) the tax was 7%. The high threshold meant that virtually nobody paid any tax. These tax levels are slightly different to today when the total tax burden in most countries, including all direct and indirect taxes, social security etc amount to over 50%. This is part of the financial slavery and control of the people today. The individual’s incentive to work hard and spend his money on what he chooses is taken away and instead the state takes a major part of the cake and wastes most of it on bureaucracy health or social security. Income tax should be abolished and replaced by a Value Added Tax or sales tax.

The second reason to abolish cash is to totally control people’s spending. With a banking system that is leveraged up to 50 times, there is no chance that bank depositors will ever get their money back. The government knows this and this is why having only electronic money gives the state total control of people’s assets and cash. The state can now control exactly how much money is withdrawn and stop people from spending their own money. Governments believe that this is an efficient method of controlling the people, but instead of achieving control of the money, governments are at some point likely to lose control of the people which will result not just in bank runs but in government runs and anarchy.

Another very dark new development is that the European Union is considering measures to stop people withdrawing cash to stop bank runs. The plan is currently being discussed and would block payouts for 5 to 20 days. Once this law is in place, it is very easy to extend to much longer periods or permanent.

The trend is clear. Governments worldwide know that the banking system is totally bankrupt. The problem is that most governments are also bankrupt. The only solution they have is to print money but as I have discussed above, money printing will solve absolutely nothing. Nobody holding cash or assets in the bank must believe that the government guarantees of $100,000 or €100,000 is worth anything. Firstly, the governments haven’t got any money and secondly, they will renege on their commitments.

We are now reaching the final stages of the 100 year old plan devised by the bankers and the elite to control the financial system and thus also major parts of the world as Rothschild said. The final collapse is inevitable as von Mises stated: 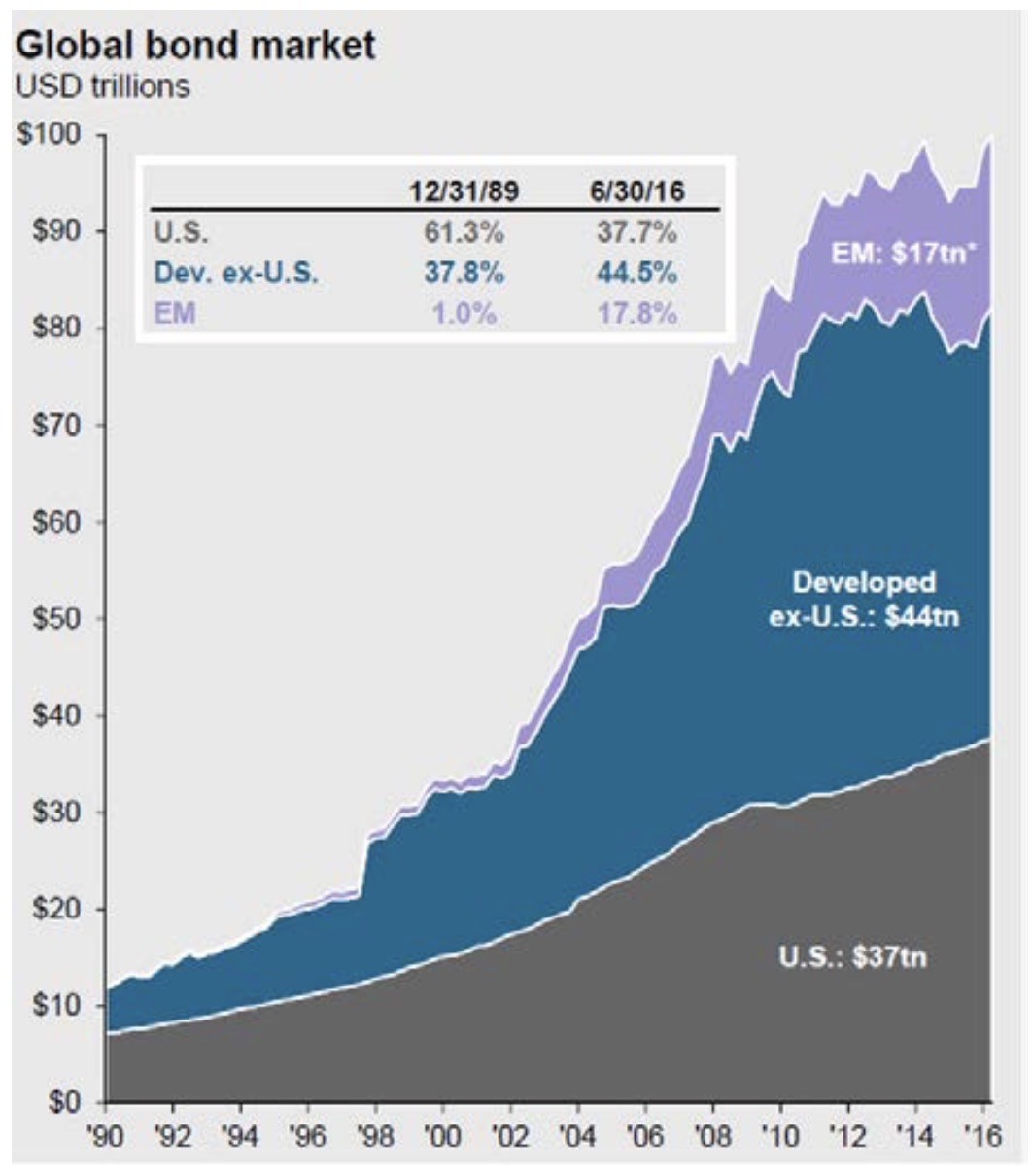 The coming autumn could be decisive. All the bubble markets show no fear. Stocks are at highs and the VIX or volatility index at historical lows. Property markets continue to be strong fueled by cheap money. And the global bond market continues to expand exponentially.

Stock investors’ complacency is dangerous. Dollar investors should start worrying now. The dollar is weakening and is on the verge of a collapse. Short term the dollar is possibly a bit oversold but medium to long term it looks sick. Out of all the weak currencies, the dollar is likely to fall first, followed by most of the others until they reach their intrinsic value of zero.

Time Is Running Out
Gold and the other precious metals have now finished their correction. Next should be a major breakout which will accelerate in the autumn. The crypto currencies could continue to benefit from the mess in the world and go higher. But remember that cryptos have nothing to do with wealth preservation. It is electronic money with no underlying value. When the mania is over, cryptos are likely to be as valuable as Tulip bulbs when that speculative craze collapsed in the 1630s.

As currencies fall, exchange controls will be introduced in most countries. The US will most certainly be one of the early countries to announce it.

Physical gold will, in the next few years, be one of the few ways to preserve wealth as the world experiences a total wealth destruction. There is still time to take money out of the bank and to own gold in a safe jurisdiction like Switzerland and Singapore. But that opportunity will not be open for long. Also, gold is unlikely to be as cheap as it is today for much longer. We could see new highs in 2017. However, the short term price level is irrelevant. What is important is that physical gold is superb insurance against a very risky world.”