As we get ready to kickoff trading at the start of a new week, today the man who has become legendary for his predictions on QE and historic moves in currencies, warned King World News that Pandora’s Box is about to be opened once again and it will lead to disastrous worldwide consequences. 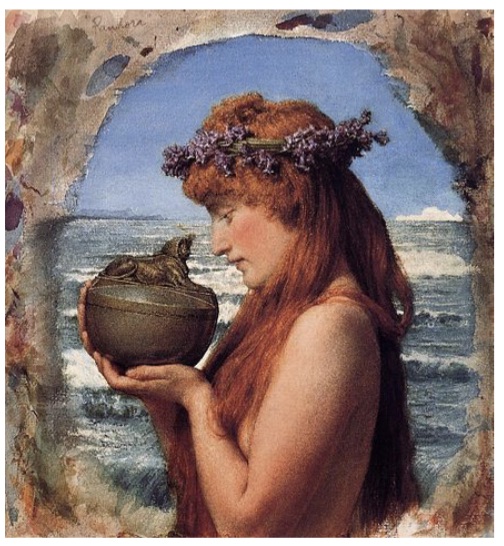 Pandora’s Box
February 19 (King World News) – Egon von Greyerz:  “In the old Greek mythology, the opening of Pandora’s box unleashed many evils on the world. Within the next few years, we will see a modern Pandora’s box being opened that will lead to events in the world which will be as devastating as when the ancient box was opened. The very big difference is that this time the consequences will not be part of historical mythology. Instead they will be real and catastrophic for the whole world on a scale never experienced in history…

Egon von Greyerz continues:  “Pandora – the all giving – was the first human woman created by the Greek gods. Zeus ordered her creation to punish humanity due to Prometheus’ theft of the secret of fire, a secret he gave to humanity. Pandora got hold of a Box (actually a jar) belonging to Prometheus’s brother and opened it, thereby letting out all the evils of humanity including death and disease. Realizing her mistake she closed the jar and the only thing left inside was Hope. Just as the punishment Pandora inflicted on humanity, the world will in coming years be punished for the excesses, debt, deceit, lies, decadence, and lack of moral and ethical values. As the modern Pandora’s box is opened, there will be so many problems and shocks the world will experience that the list will be endless.

There have been numerable periods in history when a sound economy based on sound principles has been transformed into massive debts, money printing and war. Some of these cycles have been of a smaller magnitude and virtually all of them have been local or regional. Thus we have seen many examples of economic collapse in individual countries like Argentina or in regions like the Roman Empire. But never before in history has virtually every country and every region been insolvent or bankrupt simultaneously.

If we start with China, debt has grown exponentially in this century from $2 trillion to $40 trillion. Like most debt based countries, China has to grow debt at ever increasing rates to expand GDP. Since 2009, Chinese debt has grown 3x faster than GDP. China’s debt to GDP ratio is estimated at around a massive 300%. But if we base debt to GDP on the Financial Stability Board figures, the result is very different. Included in their calculation is also all Financial Assets. On that measure, the Chinese debt to GDP ratio is a staggering 833%.

But China is not the worst. Using the same measure, the UK has 1,008% debt to GDP with many industrialized countries being above 400% as the table shows. Switzerland with a banking system which is too big for the country would also be at the top of the list. 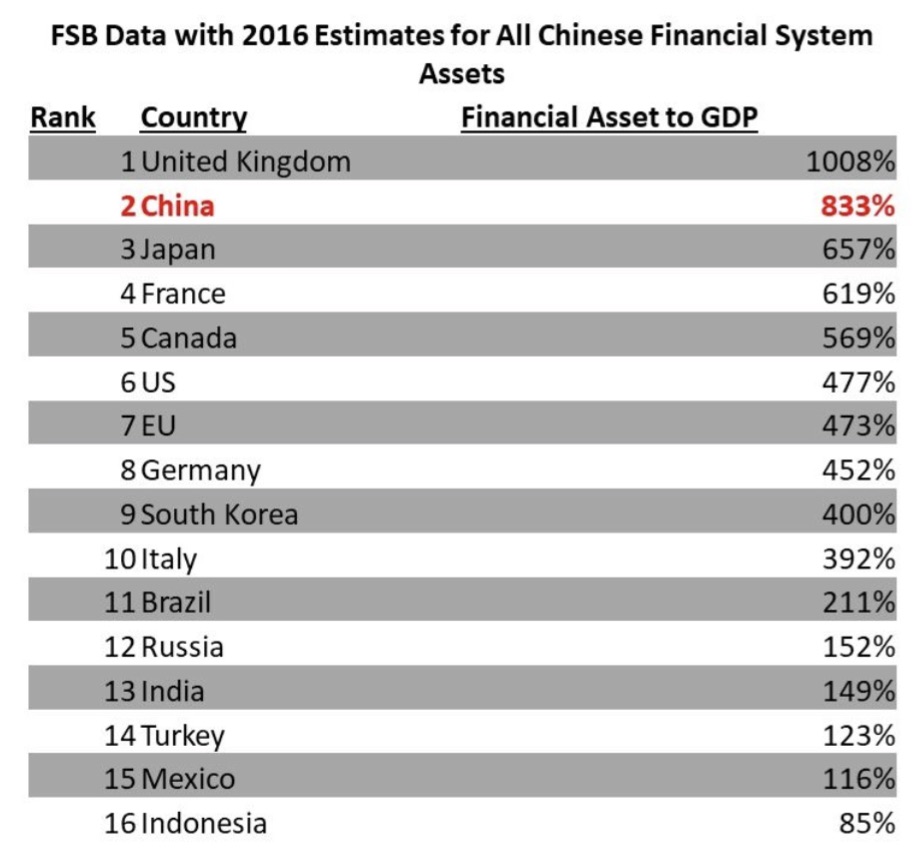 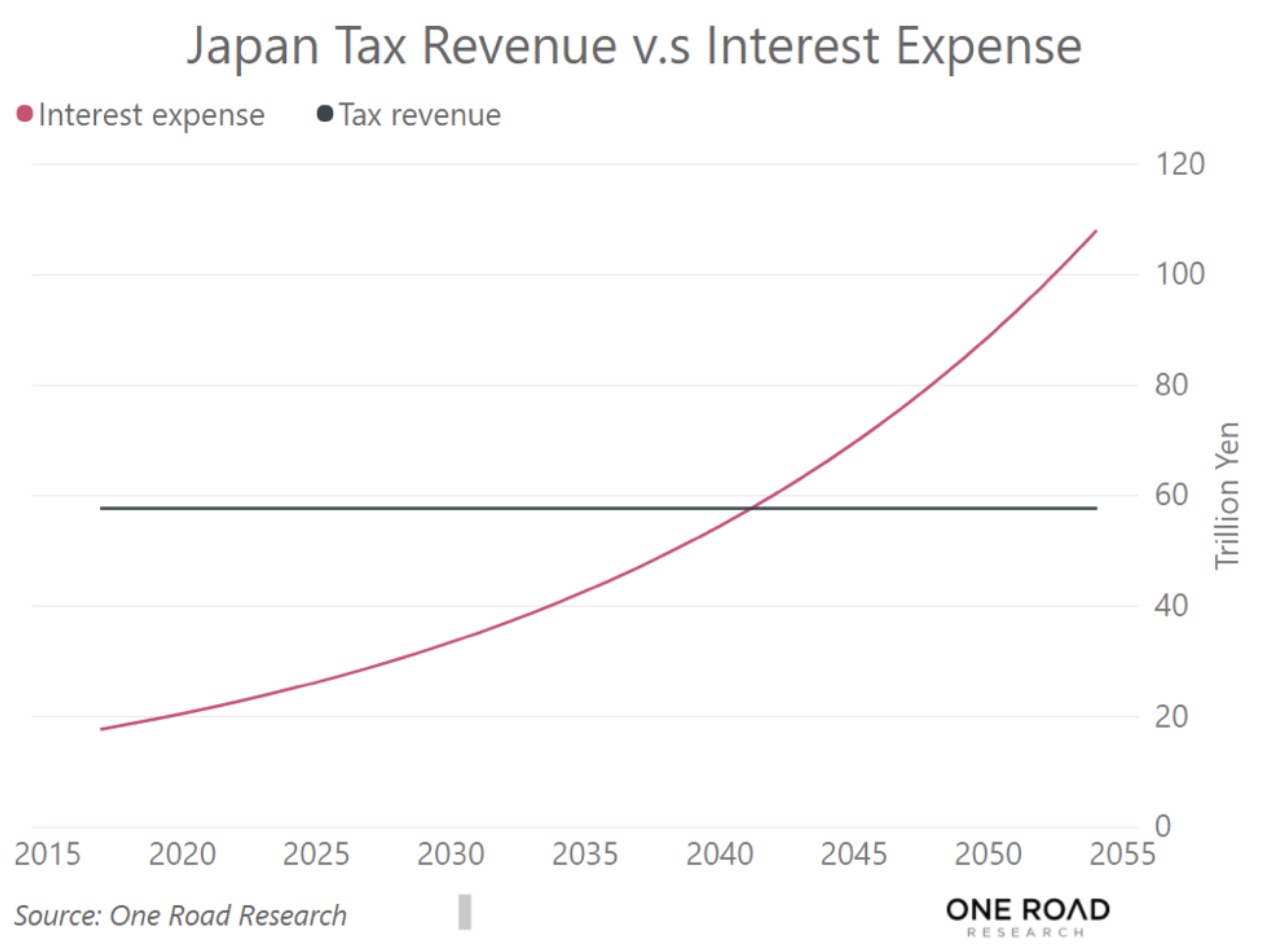 Another major problem for Japan is the aging and shrinking population. By 2065 the population is expected to shrink by 1/3 from 127 million to 88 million. Also, in 2065 40% of the population will be 65 and over as opposed to the under 14s which will be just 10%. But severe problems in Japan will not wait until 2065. Due to the massive debt and deficits, there is likely to be an economic and currency crisis within the next 5 years.

The unelected and unaccountable Brussels elite is doing what they can to hide the Euro areas problems. Going from a custom’s union to a political and economic union has been a disaster for major parts of Europe. The people in the UK decided that they did not want this elite to make most of the laws and regulations for Britain. Brussels are using all the tricks in the book to stop Brexit with threats, blackmail etc. The UK is not the only country fed up with being ruled by Brussels. Poland, Hungary and the Czech Republic have difficulties living with foreign rule. The real problem is the inequality in the Eurozone due to one currency for all. Greece, Italy, Spain and Portugal cannot survive with a currency which is much too strong whilst Germany is prospering due to a weak Euro, from their perspective.

The Target 2 balances say it all. This is the settlement system between the Eurozone nations. As the chart below shows, Germany is owed almost EUR 900 billion by primarily the Mediterranean countries but also by the ECB. Italy is the worst culprit and owes EUR 433 billion with Spain second owing EUR 374 billion. These two countries alone will bankrupt the financial system in Europe, followed by Greece, Portugal, Ireland, France etc. Germany looks strong on this measure but their biggest financial institution, Deutsche Bank, has a balance sheet exposure and a derivatives position which will not just be the demise of Germany and the ECB but also of the European financial system. 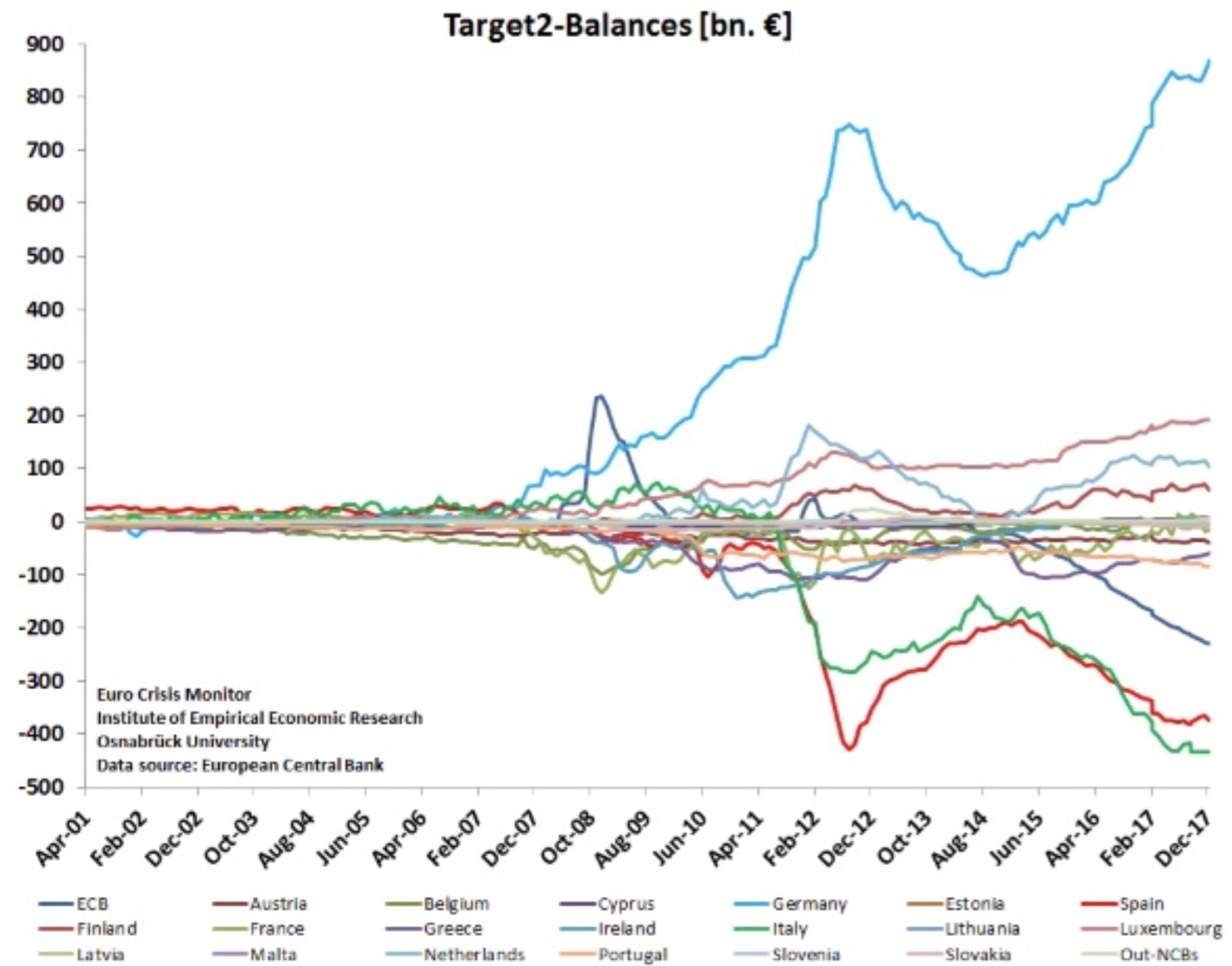 We could go on to country after country and almost without exception, every nation is in a dire state. In my KWN article last week I talked about the US and how debts are likely to double to $40 trillion by 2028.

Junk rated Emerging Market debt surged by 50% in 2017 with almost $80 billion issued. Due to the thirst for yield, Emerging Market High Yield sovereign bonds now have a yield above the equivalent US bonds. 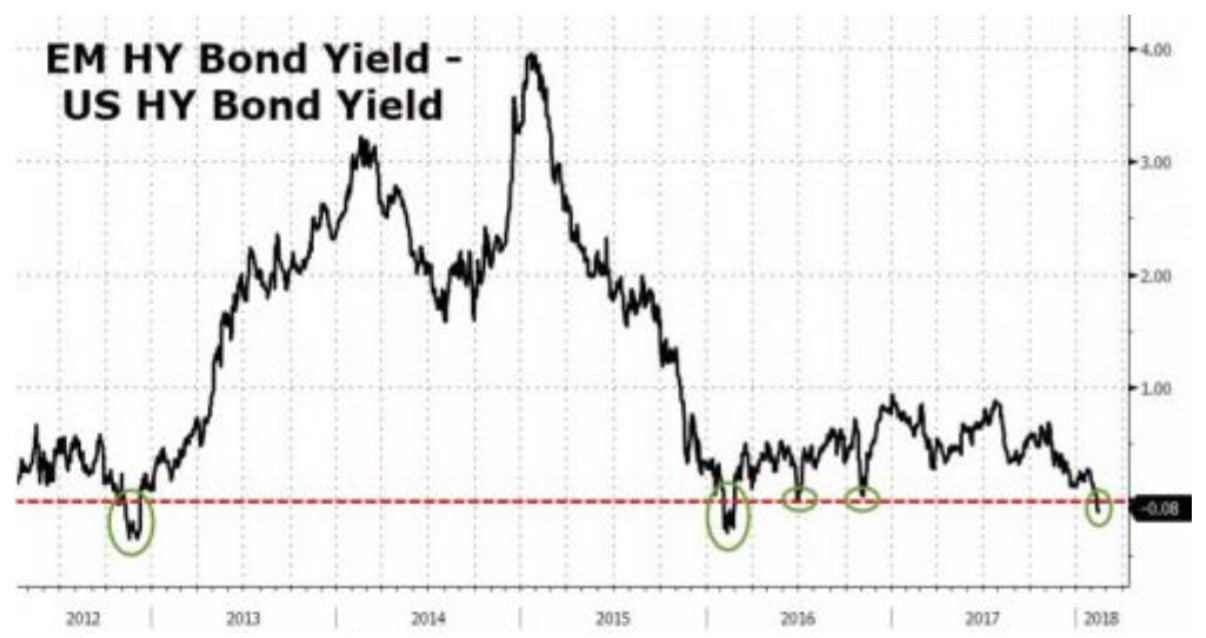 And herein lies the crux of the financial system and the world economy. We live in a world which can only survive with ever increasing amounts of debt. The world is long past the point when the real economy grows without financial stimulus. Whatever country you choose, the result is the same. Take the US, debt has grown almost 4x since 2000 and GDP hasn’t even doubled. The world needs a continuous stimulant in the form of injection of printed money and credit just to survive. That is why debt is growing exponentially whilst real GDP is not growing at all. Since the latest financial crisis started in 2006, global GDP is up 26% whilst global debt has doubled and is now around $240 trillion plus another $1 3/4 quadrillion in derivatives and unfunded liabilities.

How can anyone believe that a sick world based on debt can ever cope with the reduction in stimulus that the Fed and ECB have now started? And not only that, interest rates have now bottomed and higher rates will hit a debt infested world that can’t even cope with zero or negative rates. But the cycle has turned and inflation combined with higher rates are next. There is nothing governments or central banks can do. Collapsing currencies and collapsing debt markets will cause massive inflation and rates in the teens at least. And governments will be helpless. All they can do is to apply the failed Keynesian medicine of more credit and more printed money.

A World In A Debt Crisis
It is evident that a world in a debt crisis cannot be cured by the same medicine that caused it in the first place. More debt and more printed money can only grow the problem exponentially. There is no time in history when debt has created prosperity for the world as a whole. Yes, there is the minuscule minority which has benefitted but most of their gains will disappear as we will experience the biggest wealth destruction in history.

There is nothing that is sound in our current financial system. Virtually all sovereign nations are bankrupt. Add to that their pension, social security, medical and other unfunded liabilities. There will be no money for any of that. Tax revenues will collapse and there will be no or very little money to pay for any government expenditure whether it is schools, hospitals, defense, roads, transport etc. Most of the problems of debts, deficits insolvent banks and sovereign nations are known to anyone who cares to study it but governments and central banks have decided to put their heads in the sand hoping the problems will go away.

But when Pandora’s Box opens fully this time, it will not just be all the known problems which will shock the world. Because in a world based on debt and printed money there will be numerous falsities, frauds and concealed bad news emerging. Shocking events will come out of every corner. We will find out that governments have lied to us in any area from finance to politics. Both banks and central banks will have hidden all the bad news just like a fraudulent trader who hopes to recover on the next position. The same with big corporations. Having been through a number of downturns, I have seen this before, especially in the 1970s. But the problem this time is so much bigger that the consequences will be disastrous.

Central banks will respond with the only remedy they know. They will print unlimited money creating hyperinflation for a brief period. But printing more money will only exacerbate the problem. And writing off all debts which many people put forward as a solution is certainly not a panacea. If it was that easy, why don’t we just continue to borrow and print and write off the debts to create the ultimate Shangri-La? Well, for one simple reason – it doesn’t work! If all the debt is written off, then the assets that this debt has supported will also implode in value. Thus, we would have a wealth destruction of a magnitude that the world has never seen before. Most financial assets will disappear or lose 90-95% in value. The most likely outcome is not that debts will be written off but that they will implode in value since they will never be repaid. The consequence will be the same, a deflationary implosion of debt and assets.

The best protection is to own physical gold and silver and for the ones that can, productive land (unleveraged). Some resource stocks will appreciate considerably but remember that this is much more speculative since they are held within the financial system and subject to many risks. Some investors who bought gold and silver around the highs in 2011-2 might be impatient. But if they realized that they are holding the best insurance that money can buy against all the coming problems in Pandora’s Box, they would feel extremely content. Gold and silver will reach levels that few people can imagine today. But this is a double edged sword. Because when the precious metals reach those levels, the world will be a lot less pleasant than it is today. So the best is to just enjoy the present, knowing that with gold and silver we are financially protected against a very different world which lies ahead of us.”

***KWN has just released the timely audio interview discussing the action in the gold, silver and mining share markets as well as the action in the stock markets and much more and you can listen to it by CLICKING HERE OR ON THE IMAGE BELOW.