As the world edges closer to the next crisis, today the man who has become legendary for his predictions on QE and historic moves in currencies just warned that most people don’t understand the scale of the collapse that is in front of us. 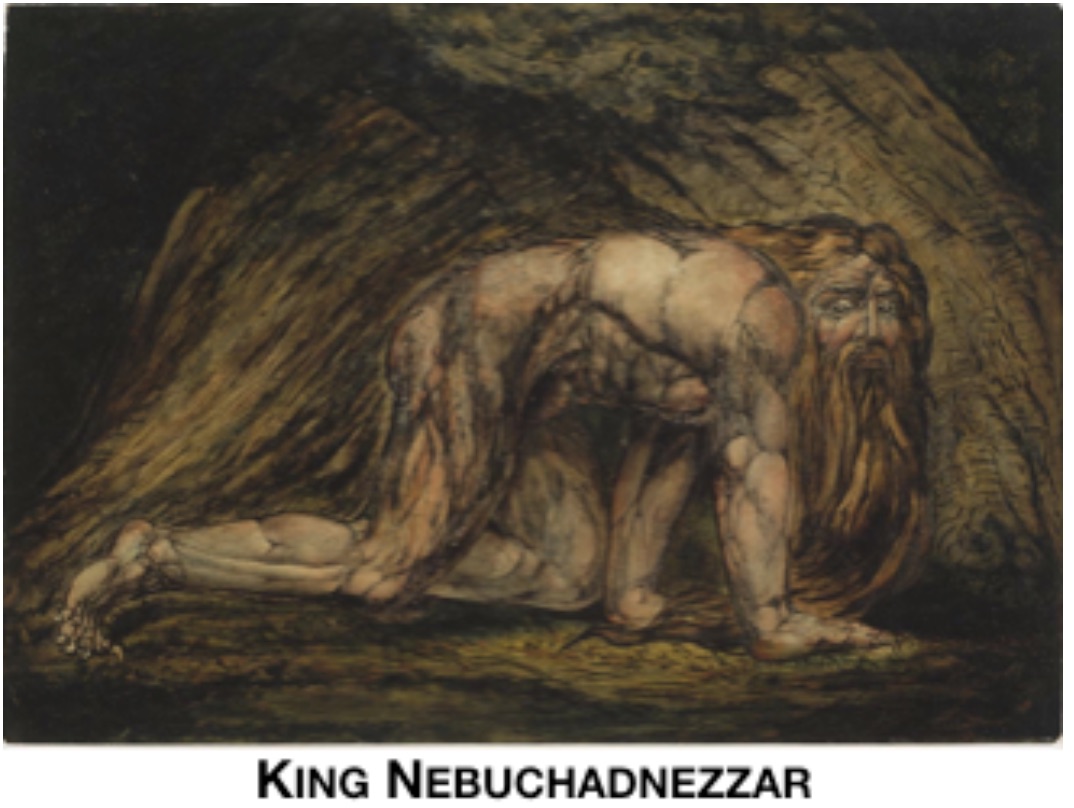 Manipulation On A Greater Scale Than Any Other Time In History
August 4 (King World News) – Egon von Greyerz:  “History is full of mad leaders  from the Babylonian King Nebuchadnezzar and the Roman Emperor Caligula to many English and French kings as well as modern examples. But the question is, have we ever had such a mad world as it exists today? Globally, ethical and moral values have vanished and decadence is rampant. And financially there is zero discipline as leaders are attempting to set aside the laws of nature. This is, for example, totally obvious in the manipulation of the world economy, which is done on a greater scale than has ever been done in history…

This Is Madness
So we are not looking at one or two mad leaders today, but instead at a mad world where virtually every single leader or central bank head is mad. If they weren’t, why would they attempt or print the world to prosperity with fake and worthless money or raise unlimited credit. And why would they pay people to borrow money through negative interest rates.

The next logical step is that we all stop working, let robots produce what we need, with the government giving us all ample free money to buy what we want. And if we need more money, we can just borrow and will receive interest on top of the loan. Naturally the loan will never need to be repaid since we can print unlimited amounts to infinity.

The above description might sound like an implausible saga but it is not far from where we are today. So we we don’t have robots that do all human work yet, but it is just a matter of time. We must also remember that all productive capacity will be owned either by the government or more likely by a ruling oligarchy. Thus normal people will be virtual slaves with very few needed since robots will do most of the work.

We are certainly not yet at the point where humans can be totally replaced by robots. But the trend is clear and it is only a matter of time, whether it takes 100 years or several hundred. A severe economic crash could obviously delay this development. After the fall of the Roman Empire, cultural and economic evolution stood still or went backwards for an extended period. The Dark Ages lasted between 500 and 800 years, depending on how you count. 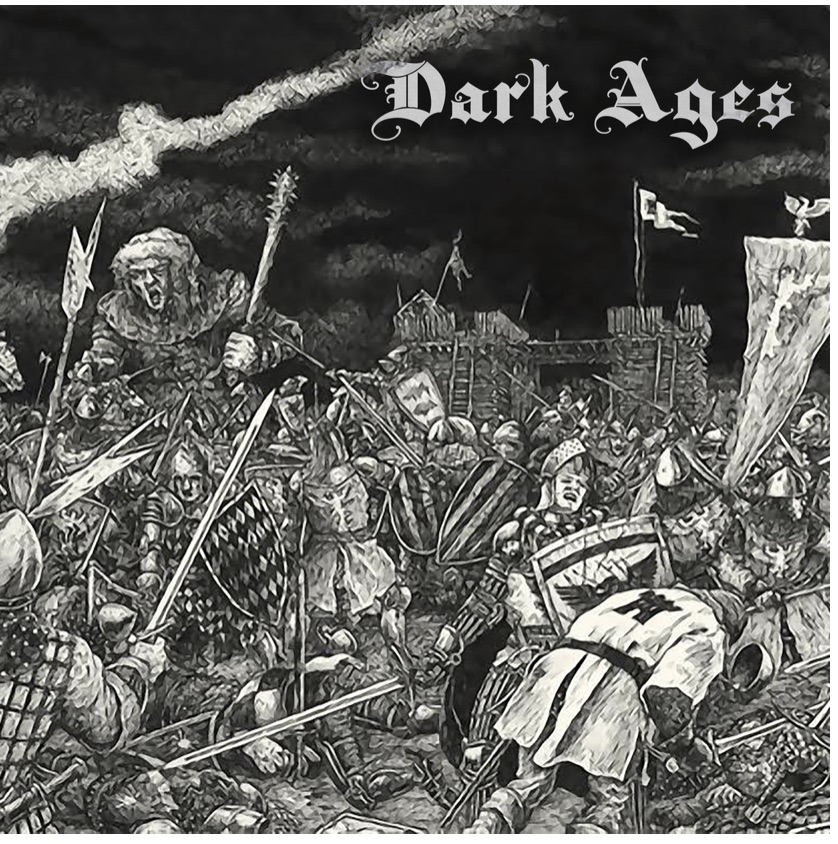 We must learn from history but mankind never does. Every generation has always believed that because I am here now, it is different.

Bearing in mind what could happen longer term, let us look at the shorter time frame. As I said, mad governments and central banks are doing all they can to expand the bubble to a magnitude which will turn the world economy into a massive nuclear bomb. Once this bomb detonates or more appropriately implodes, the consequences will be disastrous for the world. It will be impossible to forecast the exact repercussions of this even, but what is quite certain is that it will involve major suffering for our planet at all levels.

A World Of Panicking Central Banks
As I discussed in last week’s KWN article, central banks are now panicking. They know that the world economy and the financial system is standing on a foundation of quicksand. The effects of quicksand is that the harder you try to get out, the deeper you sink. And this will be the next phase for the world economy. Central banks only have two tools at their disposal. One is money printing and the other is interest rate manipulation.

Since Nixon closed the gold window in 1971, central banks have abused these two tools with ever increasing frequency. The consequences for the world have been disastrous but virtually no one has noticed. For example, the average house in the UK cost £4,700 in 1971. Today the price is £230,000, even though you would only get a shed for that money in southeast England. Still, the average price has gone up almost 50x or 4,800%. Let’s say that instead of buying a house, the person put £4,500 in the bank earning 4% per annum for 48 years between 1971 and 2019. Today he would have £30,000 in total, including the interest. So his money in the bank went up 6x while the house went up 50x. Obviously, he can’t afford to buy a house with his savings having lost most of the purchasing power.

This inflation is how savers have been crushed by governments’ irresponsible destruction of the purchasing power of money. Credit expansion and money printing have totally demolished the value of money and also the incentive to save. Today it is even worse for savers since it is no longer possible to earn an annual interest rate of 4%. In most European countries you earn nothing or negative interest. Today savers have to pay a penalty to the government for being thrifty. This is totally outrageous and will soon lead to the destruction of the financial system. As anyone who understands the basics of economics knows, real investment returns come from savings. To achieve real growth and a stable currency, total investments must equal savings.

Most People Don’t Understand
Most people don’t understand that the value of their money in the pocket is deteriorating all the time. They live under the illusion that prices are going up, which is totally erroneous. It is not prices that are going up but the value of money which is declining rapidly. The example of the house above going up 50x in 48 years is a good illustration. In real terms the house has not gone up in value at all. It is the value of the money that has collapsed in all countries since Nixon closed the gold window.

Governments hate gold because gold reveals their deceitful actions in destroying the value of money. But they don’t just hate gold, they don’t understand it either. In 1999-2002, both Switzerland and the UK sold around half of their gold. In the case of the UK they sold 395 tonnes at an average price of £200 per ounce ($280). They received £2.5 billion. Today the gold would have been worth £15B. So Gordon Brown, the UK Chancellor, has cost the country £12.6B ($10B) by selling off half of the gold reserves at the very bottom of the market. The Swiss government was even more clueless and sold 1,500 tonnes, which cost our country $38 billion.

If governments and central banks were honest, every year they would publish a table illustrating how much value the currency has lost in relation to gold, which is the only money that maintains its purchasing power. But since governments never do this, I will do it for them. Below is a table of the gold price for a selection of countries. 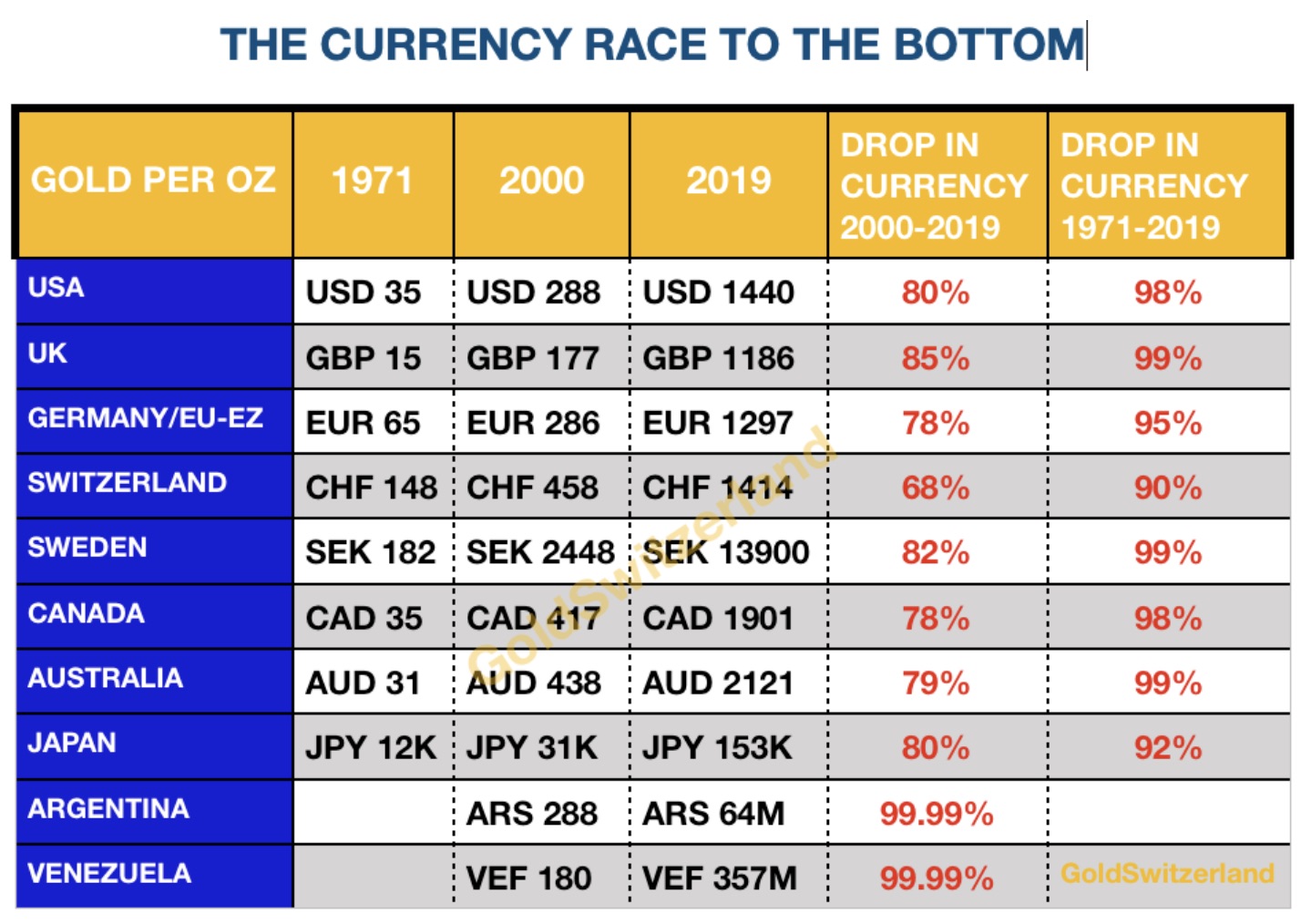 The message couldn’t be clearer. Most of the major currencies have lost 98-99% of their value in real terms since Nixon’s fatal decision in 1971. Some, like the Swiss franc, DM/Euro and the Yen, have fared marginally better. And if we look at how all of the currencies have performed in this century, they have all done abominably. Major currencies have lost 78-85%. Again, the Swiss franc is the star performer with only a 68% loss. For anyone who wants to understand economics, and governments’ nefarious mismanagement  of our money, all they need to do is to look at this table. But it will never be part of any university or business course curriculum. Nor will any journalist cover this simple but critical concept.

Also, in the table above I included Argentina and Venezuela because they show what the next step will be for most countries in the world in the next five years or so. With the next round of money printing on a scale that has never been done before in history, the dollar, euro, yen, pound, etc, will complete their final falls to zero. Whether gold in these currencies goes to$ 64 million, like in Argentina or $357 million as in Venezuela, is irrelevant. Paper money will be totally destroyed and hyperinflation will be rampant. The next stage thereafter will be a deflationary implosion of the financial system including all credit and most bubble assets like stocks, bonds and property.

Not only does the table explain what has happened in the world economy in the last 48 years, but it also predicts what will happen in the next few years. Because anything that has fallen 98-99% is guaranteed to fall 100% and lose all of its value. And the recent actions and statements of the Fed, ECB, Bank of Japan, etc, is now the launch of the final round of currency slaughter. There is no way to avoid it, von Mises told us this already back in 1951.

So as von Mises predicted, this is what is coming next — a final and total collapse of the currency system.

Gold Is Showing Us The Way
Gold is now showing us the way and has made new highs in many currencies like the pound, Canadian and Australian dollar, the yen, Swedish and Norwegian kroner, and many more. The euro and the dollar will soon follow. But we must remember that it is not gold making new highs, rather the currencies making new lows. What will happen next is that paper money will be totally destroyed and so will all the bubble assets. Although most major currencies have already fallen 80% since 2000, they will all lose another 100% measured from today.

We decided to put major funds into physical gold in 2002. Many of the people we advised at the time were UK based. Gold in pounds at the time was £200. Today it is almost £1,200, a 6x gain. The combination of capital gain and asset protection cannot be beaten by any other investment. And it is so simple, no daily worries about buying and selling stocks and spending lots of time trying to understand the folly of investment markets.

With the economy as mismanaged as it is today, the government does all the work for us through unlimited money printing and credit expansion, and that work will now accelerate. So all we need to do is to ride the government wave of fiat currency destruction. Gold will reveal how badly governments are doing. It must be the simplest investment game in town!

So anyone who doesn’t own gold and silver must take action now. There is still time to buy the best life insurance possible. Because this insurance will not only protect your assets from total destruction but also prove to be the most profitable investment in history.  But remember to store it outside of the banking system and in a safe jurisdiction…For those who would like to read more of Egon von Greyerz’s fantastic articles CLICK HERE.

Gold & Silver Continue To Shine As Theater Of The Absurd Continues, Plus Tom McClellan On Stock Market Reversal CLICK HERE TO READ

ALERT: Schiff Says This Could Send The Price Of Gold Above $1,500 Tomorrow! Plus More On Gold And A Shocking Look At Today’s Chaotic Trading In Global Markets CLICK HERE TO READ

Can This Be True? Is The Price Of Silver Really Headed To A Jaw-Dropping $690?