Today the man who has become legendary for his predictions on QE and historic moves in currencies and metals told King World News that the global population will be cut in half as financial and economic chaos erupts.

This will not end well!
May 24 (King World News) – Egon von Greyerz at Matterhorn Asset Management (based in Switzerland):  As technological developments and markets go parabolic, we observe many market “experts,” even intelligent ones, forecasting that we are now in an exponential economic era. Thus many believe that this will go on forever. This is the typical attitude at market and economic tops and guarantees that THIS WILL NOT END WELL!

It is clearly absolute nonsense to believe that exponential expansion based on deficits, debts and fake money is the beginning of a new era. Anyone studying the economy and history of markets knows that exponential moves indicate the end of an era and not the beginning. As I have repeatedly said, history is our best teacher and it both rhymes and repeats itself. And history now gives us dire warnings.

ARE WE IN A PARADIGM SHIFT?
But for some reason, human beings always extrapolate current trends, whether it is population growth or stock market rallies. We know from statements at historical tops like 1929, 1987 or 2000 that anyone, from politicians to investors at the time, believe that the trend will go on forever and that the world has made a paradigm shift.

GLOBAL POPULATION TO HALVE?
Let’s start with global population. For thousands of years we saw a very slow and steady growth as the graph below shows. In the mid 1850s world population reached 1 billion. 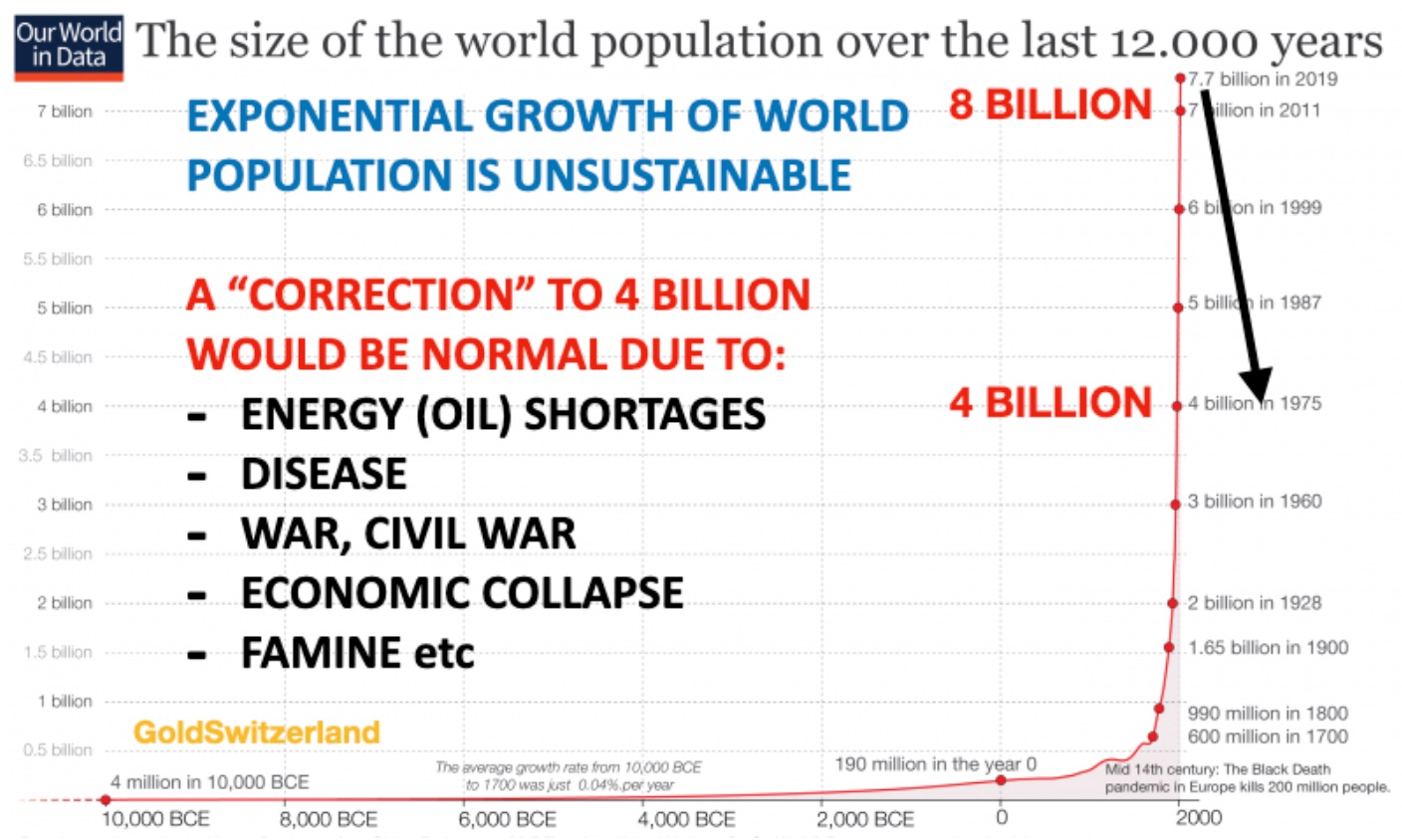 Since the mid 1800s, we have seen exponential growth in population and we are now almost 8 billion people on earth.

Energy and oil in particular play a major role in this growth, leading to increases in food production, industrialisation, better health care for people, etc.

THE EXPONENTIAL LAW OF COMPOUNDING
Moore’s law, first linked to transistors, is a projection of historical trends. The fallacy with these projections is that they assume the same trend will go on forever whether it relates to population or stock markets.

The old fable of the inventor of the chess board tells us how little understood exponential moves are. The king promised the inventor a reward for inventing the game of chess. The inventor asked for one single grain of rice on the first square of the chessboard, two on the second, four on the third and so on. The king thought that this request was easy and inexpensive to fulfil. Little did the king understand the exponential law of compounding. Because once the 64th square was reached, 18 quintillion grains were needed. This amount exceeded the total production of the kingdom. So instead of getting his reward the inventor was killed for fooling his king.

The longer a trend has gone on, the more permanent it seems to be. The explosion of population growth does not seem reversible. But the Black Death period in the mid 1300s showed us how population can quickly halve. This was the case in Europe and probably also in the rest of the world.

So exponential moves always end and so will this one. The reasons for the coming “correction” are likely to be a combination of the causes in the graph above.

EXPONENTIAL MOVES WORK IN REVERSE
Just as exponential moves up are spectacular, so are the reversals. And although few people understand it, exponential moves always reverse, at least temporarily. The problem is that the reversal is always faster, more violent and more hair raising than the advance.

A correction of global population from 8 to 4 billion would be totally natural from a statistical point of view. It would obviously be devastating for the world. But if the advance from 1 billion population took 170 years, the “correction” might take at least half of that, say 85 years. Only future historians will tell the world what actually happened.

As the chart below indicates, economic growth is totally linked to the availability of oil.

The chart shows that World GDP per capita (from 1968) grows in line with consumption and therefore also to the availability of oil. As oil production is likely to decrease over the long term, so will economic growth. This is totally in line with the view I have expressed in many articles and interviews, namely that we are at the end of a major economic cycle of at least 300 years and maybe longer. 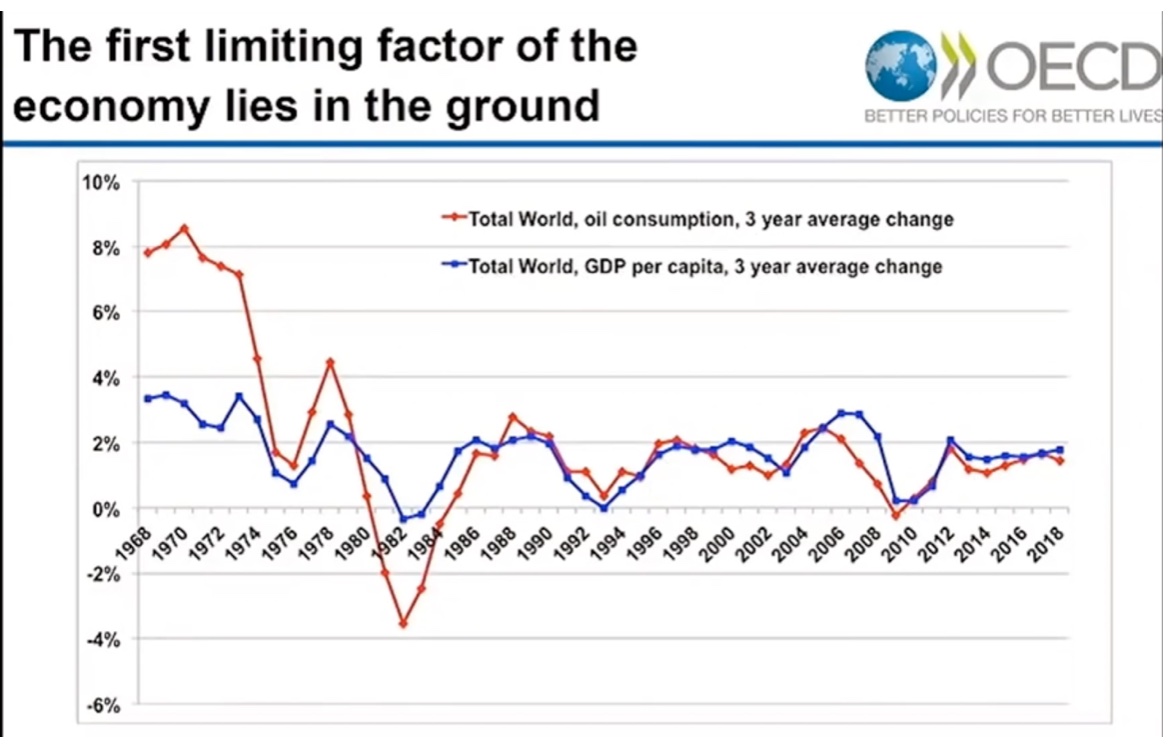 Renewable energy is unlikely to replace fossil fuels for a very, very long time, even if this is a politically uncomfortable view for the climate control activists.  What very few realise is that most renewable energy sources are very costly and also all dependent on fossil fuels, whether it is electric cars, wind turbines or solar panels.

EXPONENTIAL STOCK MARKET MOVES
If we look at some more recent exponential moves in the stock market, they have been spectacular. 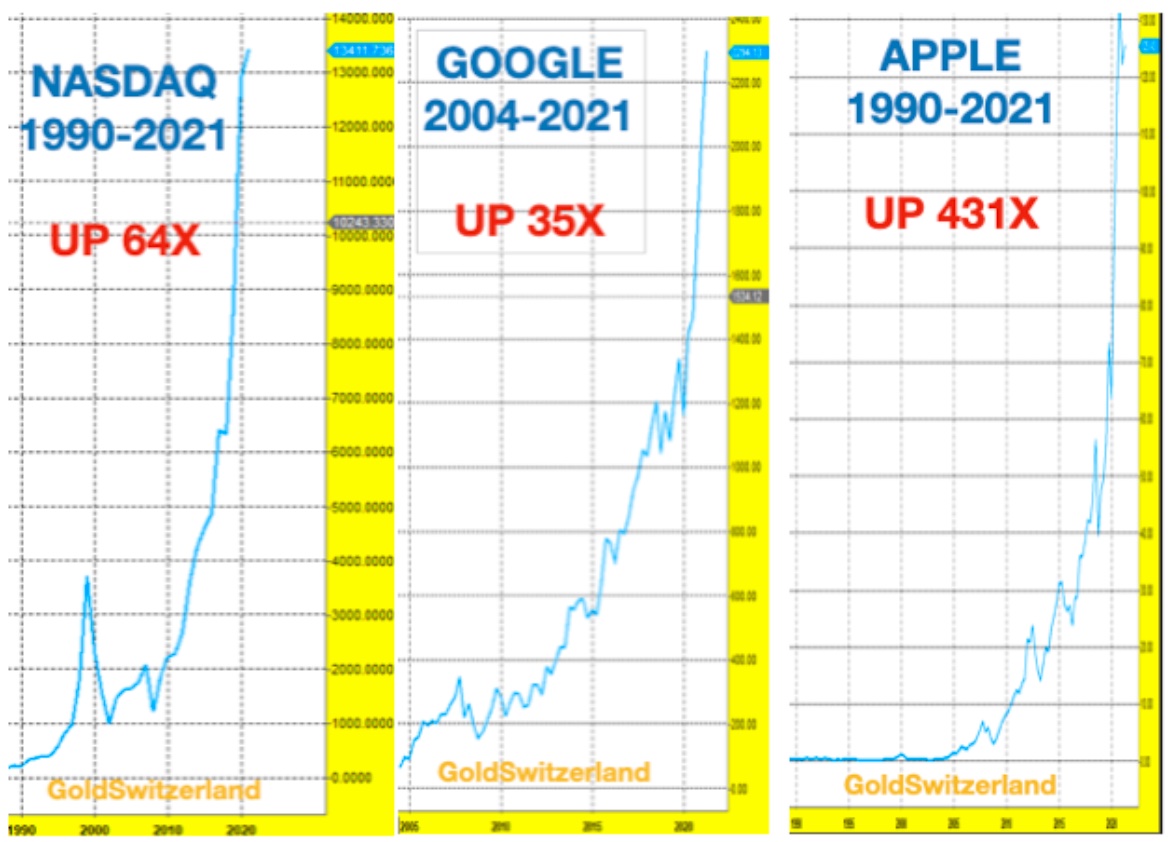 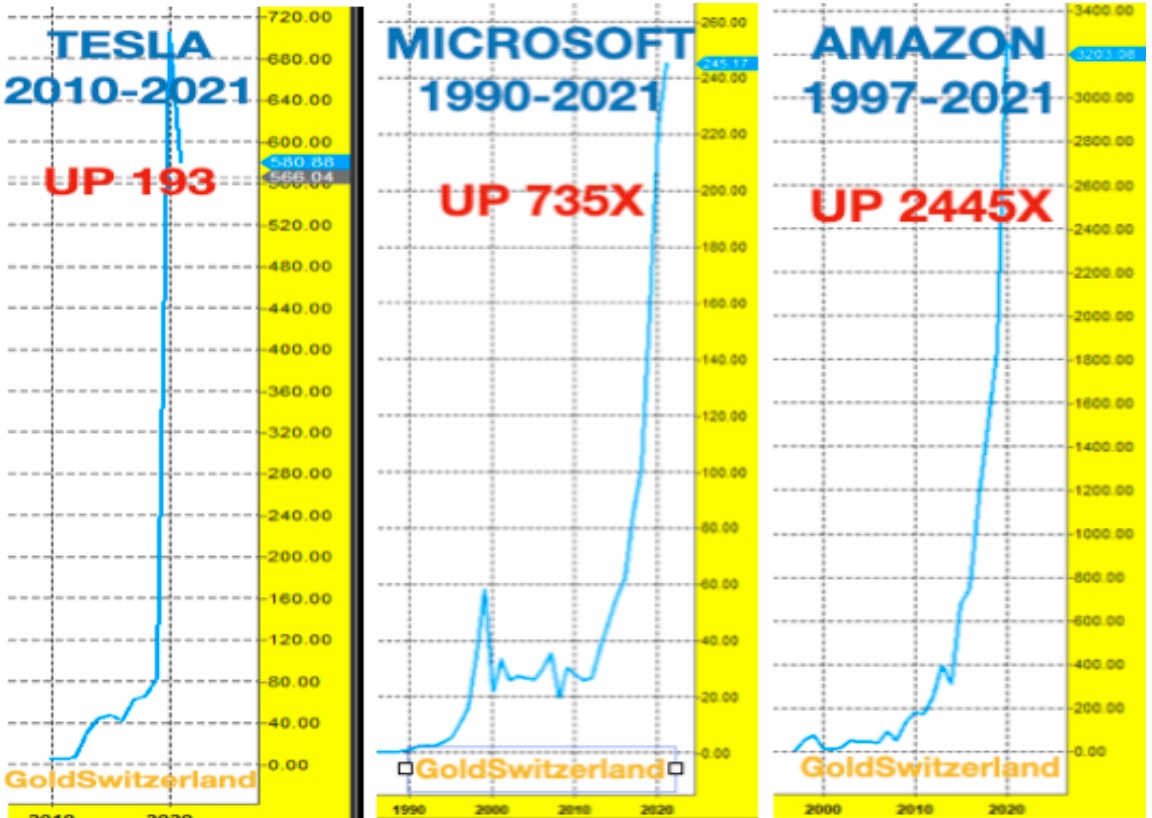 The above moves have grossly exaggerated the effect of new technologies. Once a new invention has been digested, it grows in line with the market as a whole. Take the wheel which was revolutionary at the time. It was invented. Still, today it certainly is not valued at a premium. So the value of new technologies only outperforms the market for a limited period and the above moves will see major corrections of much more than 50%. 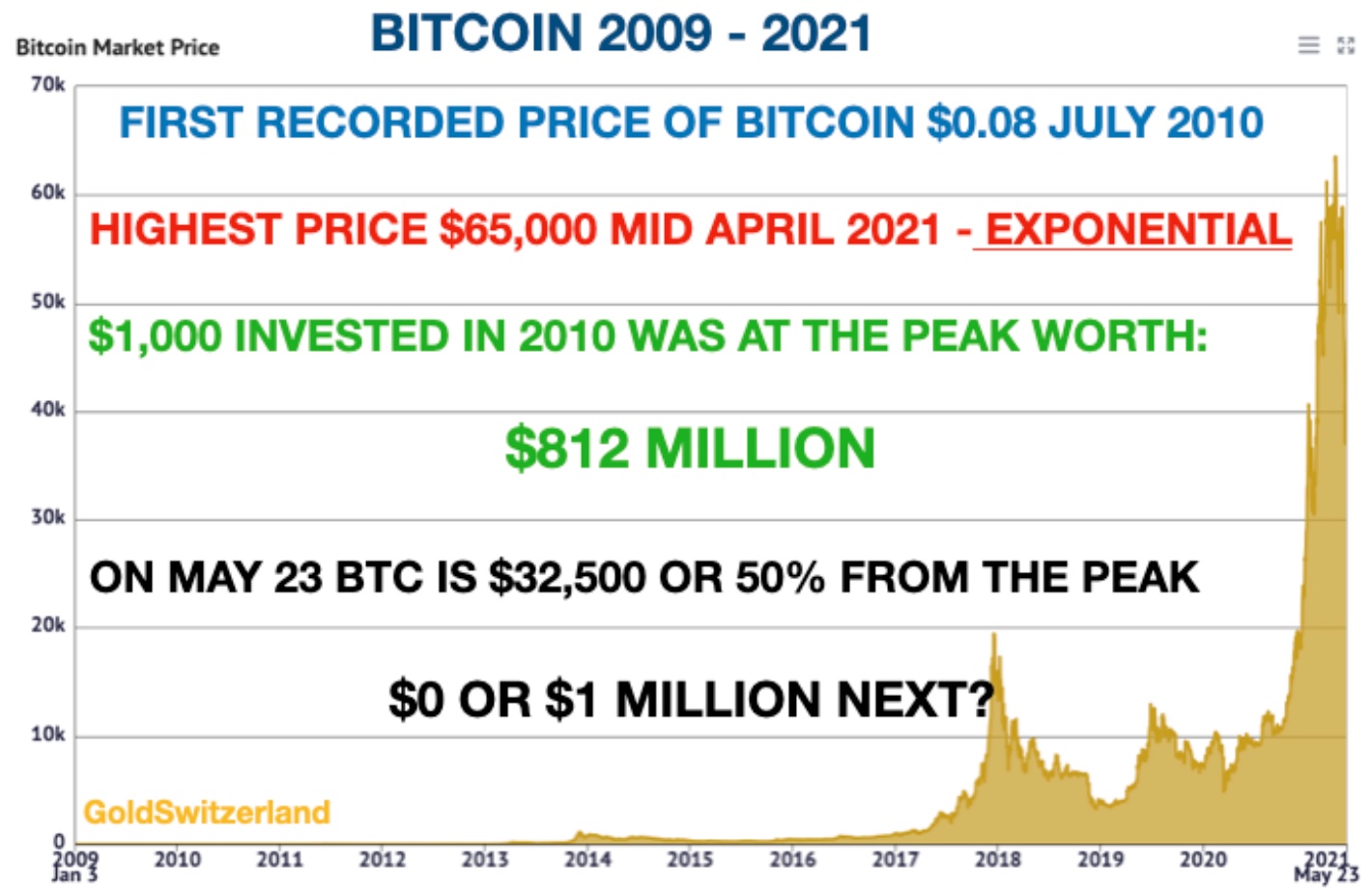 A commodity with such volatility can obviously never replace money. And nor would central banks permit it. Speculative frenzies can go on for longer than anyone expects.

So Bitcoin could go to $1 million or it could go to ZERO. Not the best of odds. And certainly Bitcoin has nothing to do with wealth preservation.

Bitcoin has been a spectacular speculative investment and early investors have made massive fortunes. Like all exponential manias it is likely to end in tears. But for the savvy investors who have now diversified into physical gold and some silver they have managed to get the best of both worlds.

I doubt Bitcoin will continue to outperform gold. But even if it does, this is a binary investment that theoretically could go to $1 million in a continued speculative mania but it is more likely to go to nearer zero in my view.

With debts and deficits now going exponential, gold will continue to reflect the destruction of fiat money just as it has for several millennia. As always, history is our best teacher…This will link you directly to more fantastic articles from Egon von Greyerz CLICK HERE.