Greyerz – Investors Have Two Choices Ahead Of The Coming Global Collapse

Today the man who has become legendary for his predictions on QE and historic moves in currencies and metals told King World News that investors have two choices ahead of the coming global collapse.

April 12 (King World News) – Egon von Greyerz at Matterhorn Asset Management (based in Switzerland):  Credit Suisse is hours from collapse and the consequences could be a systemic failure of the financial system.

Disappointingly, my dream last night stopped there so unfortunately I didn’t experience what actually happened.

As I warned in last week’s article on Archegos and Credit Suisse, investment banks have created a time-bomb with the $1.5 quadrillion derivatives monster.

A few years ago, the BIS (Bank of International Settlement) in Basel reduced the $1.5 quadrillion to $600 trillion with the stroke of a pen. But the real gross figure was still $1.5 quadrillion at the time. According to my sources, the real figure today is probably over $2 quadrillion…

A major part of the outstanding derivatives are OTC (over the counter) and hidden in off balance sheet special purpose vehicles.

LEVERAGED ASSETS JUST GO UP IN SMOKE
The $30 billion in Archegos derivatives that went up in smoke over a weekend is just the tip of the iceberg. The hedge fund Archegos lost everything and the normal uber-leveraged players Goldman Sachs, Morgan Stanley, Credit Suisse, Nomura etc lost at least $30 billion.

These investment banks are making casino bets that they can’t afford to lose. What their boards and top management don’t realise or understand is that the traders, supported by easily manipulated risk managers are betting the bank on a daily basis.

Most of these ludicrously high bets are in the derivatives market. The management doesn’t understand how they work or what the risks are and the account managers and  traders can bet billions on a daily basis with no skin in the game but massive potential upside if nothing goes wrong.

DEUTSCHE BANK – DERIVATIVES 600X EQUITY
But we are now entering an era when things will go wrong. The leverage is just too high and the bets totally out of proportion to the equity.

Just take the notorious Deutsche Bank (DB) that has outstanding derivatives of €37 trillion against total equity of €62 billion. Thus the derivatives position is 600X the equity.

Or to put it in a different way, the equity is 0.17% of the outstanding derivatives. So a loss of 0.2% on the derivatives will wipe the share capital and the bank out!

Now the DB risk managers will argue that the net derivatives position is just a fraction of the €37 trillion at €20 billion. That is of course nonsense as we saw with Archegos when a few banks lost $30 billion over a weekend.

Derivatives can only be netted down on the basis that counterparties pay up. But in a real systemic crisis, counterparties will disappear and gross exposure will remain gross.

So all that netting doesn’t stand up to real scrutiny. But it is typical for today’s casino banking world when depositors, shareholders and governments take all the downside risk and the management all the upside.

So let us look at the global risk picture in the financial system: 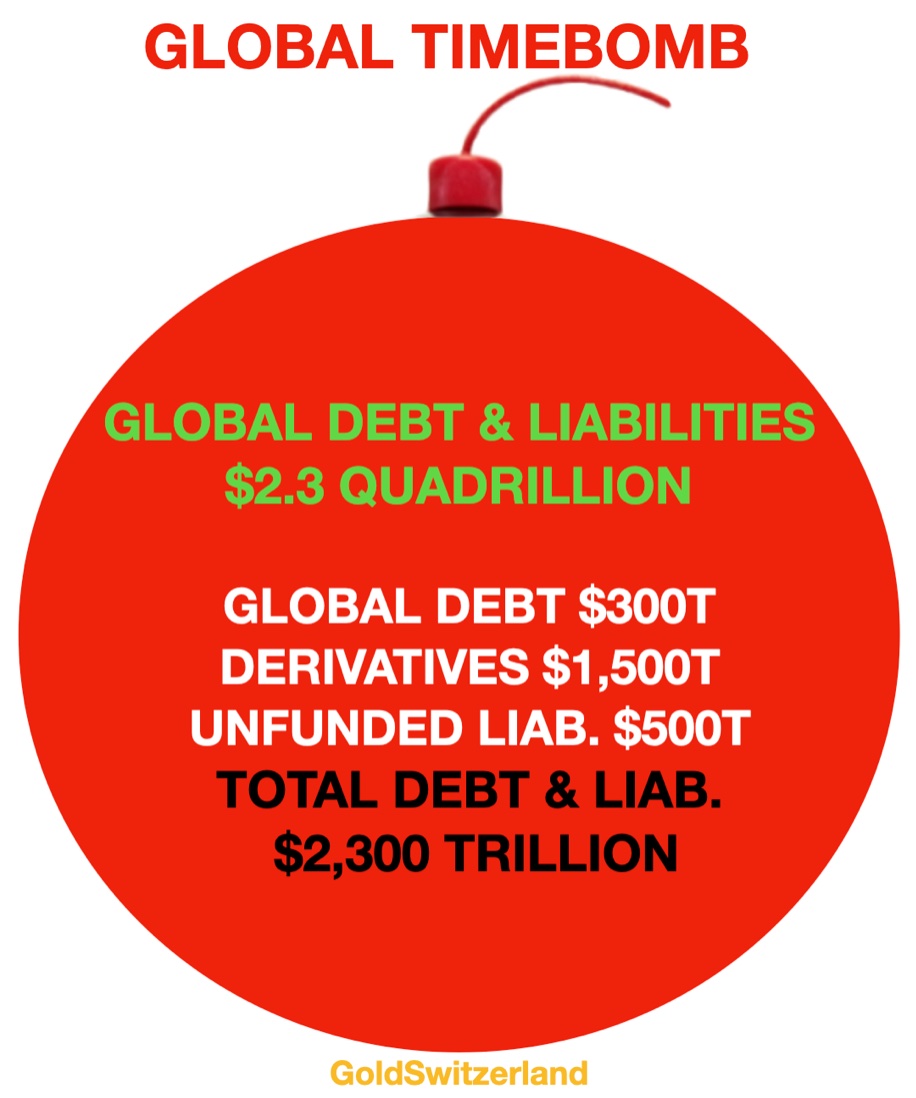 The $2.3 quadrillion above is what the world is exposed to when this timebomb explodes.

That is the total sum of global debt, derivatives and unfunded liabilities. When all the dominos start falling, and no one can meet their obligations, this is what governments are left to finance.

Yes, they will print this money and much more as deficits mount exponentially due to collapsing currencies. But the MMT (Modern Monetary Theory) clowns will then find out that printed money rightfully has ZERO value.

If these clowns studied history they would learn that MMT has never worked. Just check the Roman Empire 180-280 AD, France in the early 18th century, or the Weimar Republic, Zimbabwe, Argentina and Venezuela in the 19th and 20th centuries.

So when Fiat money dies, how much gold is required to repair the damage?

If we look at the cube below with all the gold ever produced in history, we see that it is 198,000 tonnes valued at $11 trillion. 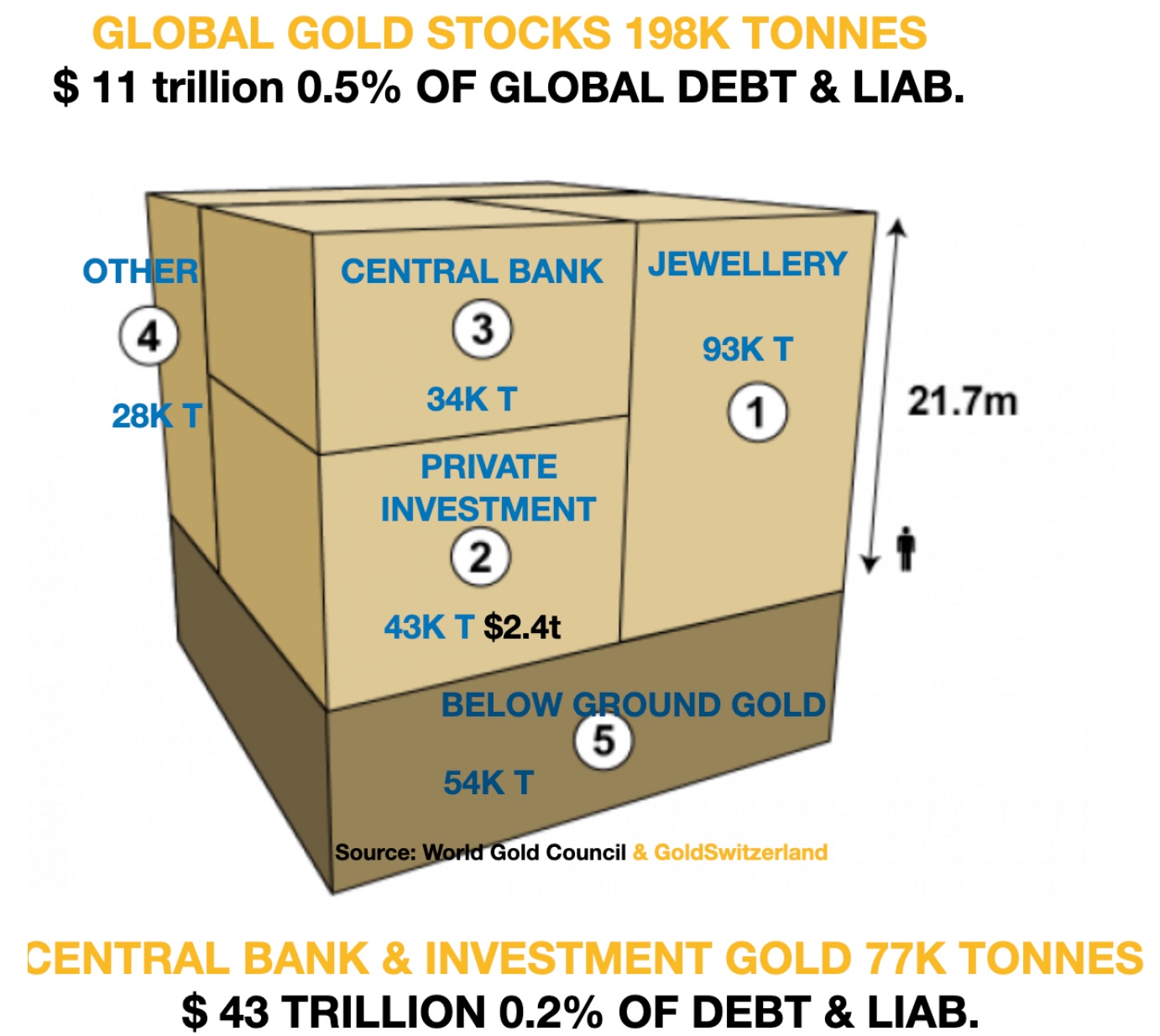 Below the cube the total central bank and investment gold is shown. This amounts to 77,000 tonnes or $43 trillion. That sum represents 0.2% of the total debt and liabilities of $2.3 quadrillion as shown in the Timebomb.

The $43 trillion gold value is at a gold price of $1,750 per ounce. This minuscule 0.2% of  liabilities obviously serves no purpose. If gold were to back the new money issued to cover the total liabilities, a 20% gold backing would be the minimum.

I am not forecasting this level or saying that it is likely to happen. All I am doing is looking at the total risk that the world is facing and relating it to the only money that will survive.

Also, measuring the gold price in dollars serves no purpose because when/if this scenario happens, the dollar will be worthless and the gold price measured in worthless dollars at infinity.

FOCUS ON WEALTH PRESERVATION
Rather than focusing on a potential gold price measured in dollars, investors should worry about preserving their wealth in real assets held outside a bankrupt financial system.

Regardless of what price gold and silver reached, history proves that it is the ultimate form of of wealth preservation.

It will not be different this time. Therefore, in the coming crisis, precious metals will be the best insurance to hold as protection against unprecedented global risk.

Gold’s rise since 2000 in no way reflects the massive money printing we have seen in this century.

Still as the graph below shows, gold is at the beginning of a very strong uptrend that has very far to go in both time and price. 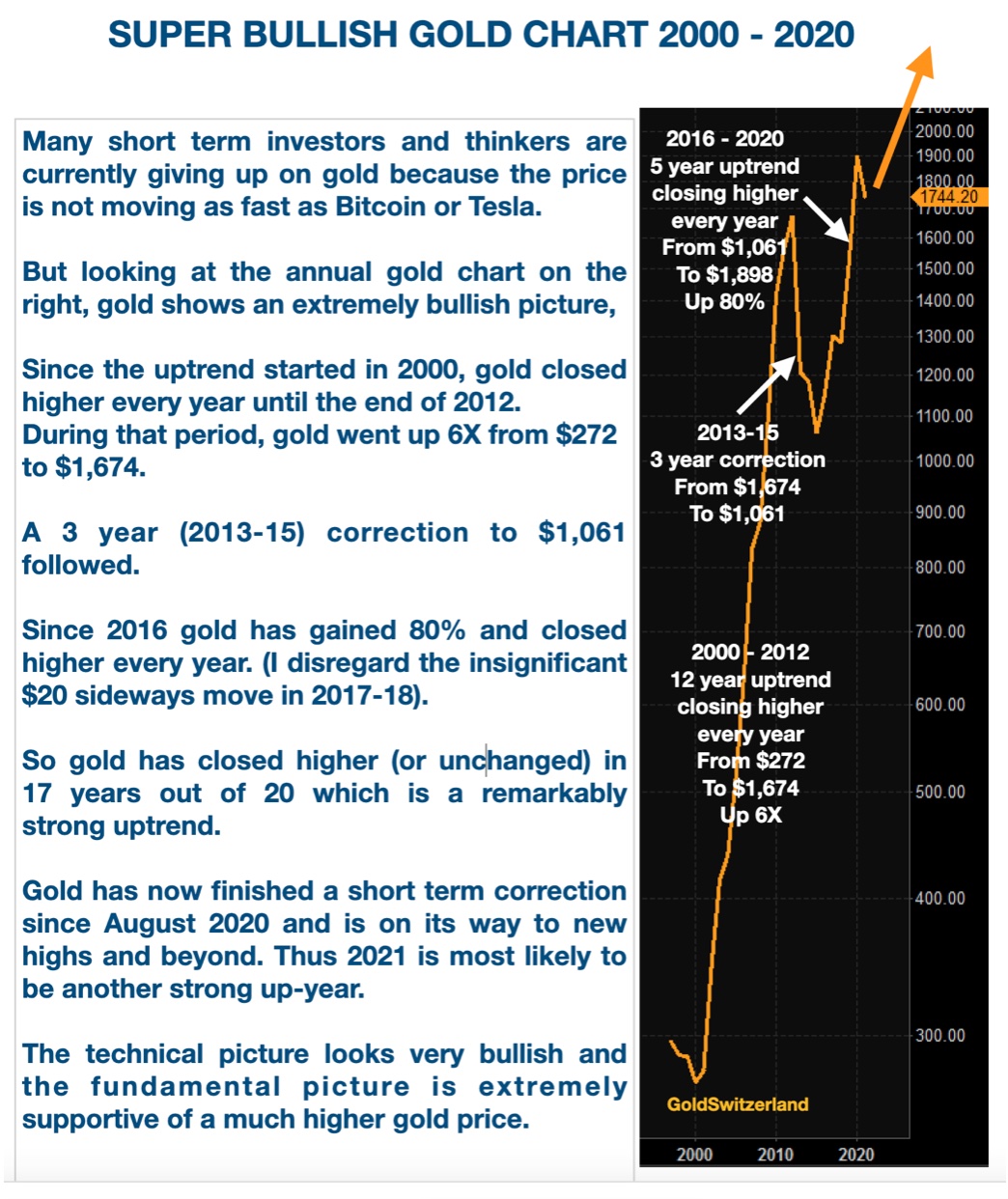 Investors have the following choice:

Either they follow the coming crash in bubble assets like stocks, property and bonds all the way to the bottom, which is likely to be 75-95% lower in real terms (measured in gold).

Or they protect their wealth in physical precious metals, stored outside a fractured financial system.

History gives the answer which route to take…This will link you directly to more fantastic articles from Egon von Greyerz CLICK HERE.