As the world edges closer to the next crisis, today the man who has become legendary for his predictions on QE and historic moves in currencies spoke with King World News about gold, the coming Greatest Depression and panic, and the most important gift.

One Of Life’s Great Lessons
January 7 (King World News) – Egon von Greyerz:  “Long term holders of gold have a different perspective of the world. They are not believers in instant gratification. Nor do they believe that a world based on money printing and debt can create sustainable wealth. They also know that the socialism which has spread like a plague in the Western world only works until you run out of other people’s money…

Egon von Greyerz continues:  “What makes gold the most obvious wealth preservation investment and insurance against a false financial system is its permanence. The proof of this is indisputable since gold is the only money that has survived for 5,000 years. Ephemeral financial systems and currencies come and go, so do empires. But gold survives them all. As JP Morgan stated:

“Money is gold, and nothing else.”

So anybody who doesn’t understand gold, neither studies nor understands history. There is nothing magic about gold, it is just money. But since it is the only surviving currency, why bet against a 5,000 year record? Gold is not an investment, it is a store of value and at times a medium of exchange.

It is quite astonishing that the immense wealth which has been accumulated by the top 1% in the last few decades is based on alchemy and fake money. This has been a fake ‘Golden Calf’ that in this era has been worshipped since the early 1980s. Since that time, real money, or gold, lost its luster totally as financial assets were leveraged to the hilt. But things started to change in the early 2000s.

During periods of financial wizardry, which we have experienced since the Fed was created in 1913, gold might seem like a barbarous relic and much less interesting than leveraging assets with the help of credit. What few investors realize is that in real terms, investment markets topped in 1999. As real terms can never be measured in fiat money, only real and permanent money can be used as a measuring stick. And that is of course gold.

If we look at the Dow/Gold ratio (the Dow index divided by the gold price), it topped in 1999 at 44. It reached an interim bottom at 6 in 2011 as gold peaked at $1,920. That was a massive 86% decline in the ratio, a virtual wipeout of stock investors measured in real terms (see chart below). 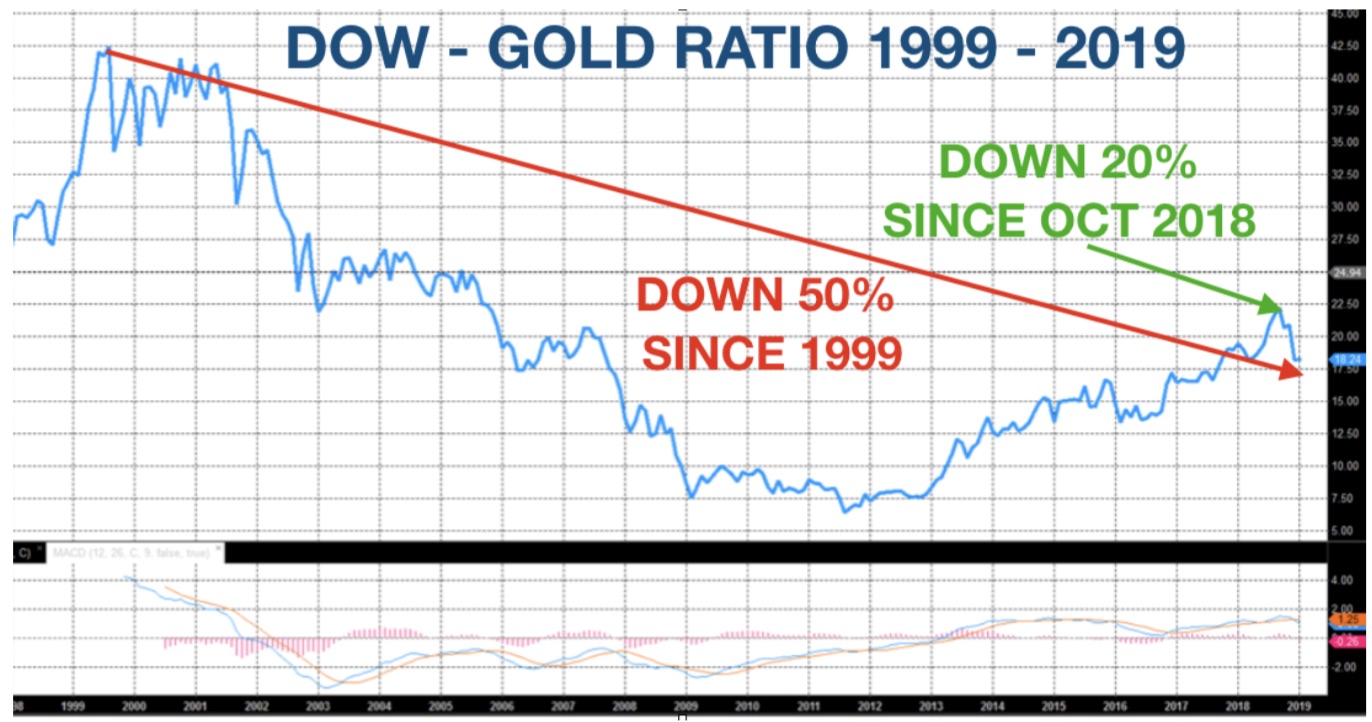 Stocks then recovered, but only by 50% of the decline against gold (see chart above. Thus, in spite of a massive stock market rally between 2009 and 2018, the Dow index has still lost over 50% against gold since 2000. (Dividends are not taken into account, nor is any gold lending).

Technically it now looks like the downtrend of stocks vs gold has resumed. Since the peak in October, stocks have lost 20% vs gold. But this is just the beginning. Eventually the ratio will most likely decline to below 1/1, where it was in 1980, and probably below the long term support at 1/2. That would be massive a 97% decline from here. So that is the magnitude of the potential asset destruction that the US and the world will experience in the next 2-6 years. But like any prediction, we will only know afterwards.

Gold in US dollars is up $100 since the bottoms in August and September of 2018. Gold priced in US dollars is still clearly a long way from the 2011 top at $1920. But the temporarily strong dollar doesn’t reveal the true picture of gold. For that we need to look at gold in other currencies. We know that gold in Argentine pesos or Venezuelan bolivars has made exponential moves. Less known perhaps is that gold is at or near the highs in many currencies like Norwegian and Swedish kroner or Canadian dollars. And in Australian dollars gold made a new quarterly closing high in December 2018 which is very significant (see chart below). 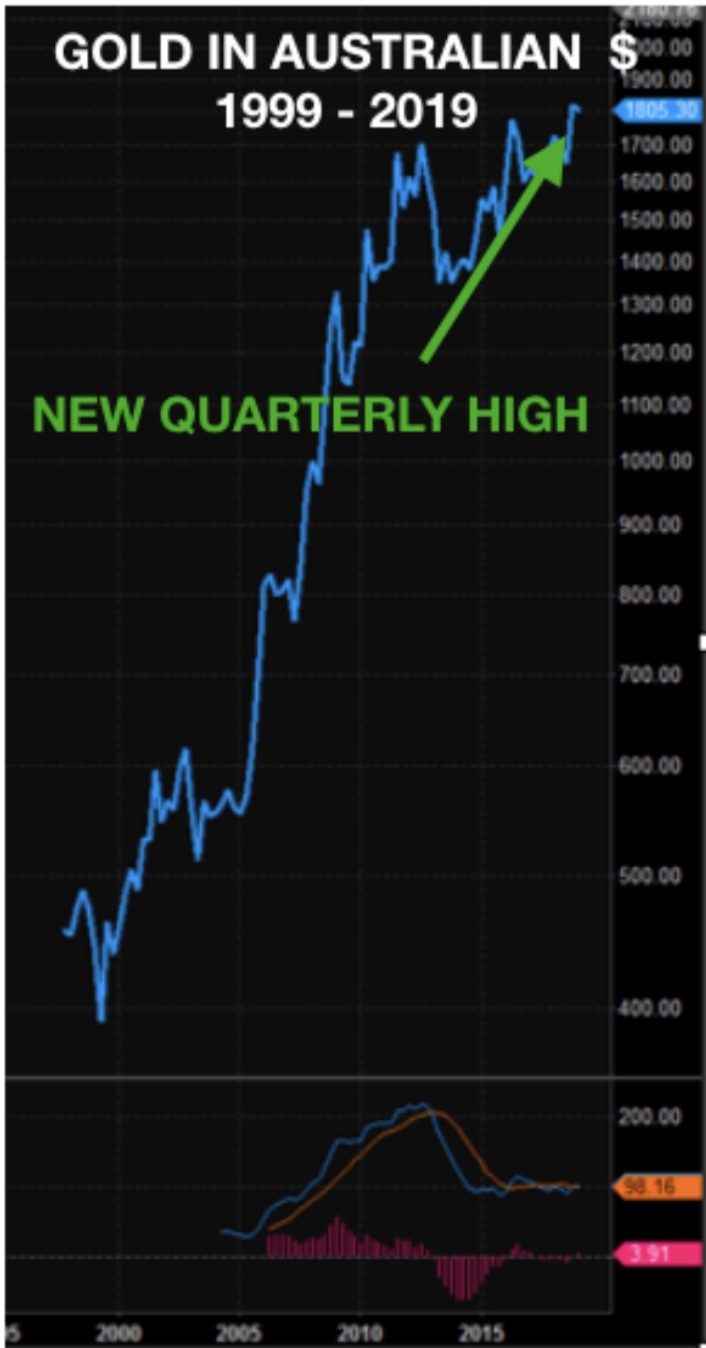 Major moves normally start in the periphery, so what is happening with the gold price in various currencies will eventually spread to all currencies. It would not be surprising to see new highs in gold in all currencies in 2019, including the US dollar. But remember, it won’t be a straight move and there will be a lot of volatility.

The other major predictor for the precious metals is the Gold/ Silver ratio which I have mentioned often. Real, sustained moves up in gold and silver only happen when the Gold/Silver ratio falls, which means that silver moves up faster than gold. The ratio made a new high at 87/1 at Christmas, and has moved down 6% in the last 7 trading days (see chart below).

We still need to see validation of this move, but long term momentum indicators confirm that a major move down has already started.

What we do know is that risk in asset markets and in the financial system is now greater than any time in history due to the size of global debt of $250 trillion, plus unfunded liabilities and derivatives of another $1.75 quadrillion, giving a total risk of over $2 quadrillion. Once this risk starts to manifest itself in defaults, the money printing undertaken by central banks will dwarf any QE program of the past. The big difference between today and 2007-9 is that next time the fake money created will have no effect. The magnitude of the problem and the money creation will have the same consequences as in any hyperinflationary economy. It will totally debase the dollar and other currencies until they are all worthless.

What is clear is that times are changing. Bob Dylan, the Nobel laureate described the course of events that we will see next already 55 years ago in his 1964 song:

Come gather ’round people Wherever you roam
And admit that the waters Around you have grown
And accept it that soon You’ll be drenched to the bone. If your time to you
Is worth savin’
Then you better start swimmin’ Or you’ll sink like a stone
For the times they are a-changin.’

The song is quite long so after the first verse I am just including the last five lines of the song which aptly describes the wealth destruction and wealth transfer that the world is about to experience:

The order is
Rapidly fadin.’
And the first one now
Will later be last
For the times they are a-changin.’

The Greatest Depression
So now is the time to “start swimmin” as the greatest wealth destruction in history is now beginning. But most of the investment world hasn’t even begun to understand how serious it will become because the coming implosion of stocks, bonds, property, and virtually all other asset markets is just one aspect of the coming super bear in the world economy. Still, it will be enough to create the greatest depression ever as stocks decline by 75-95% and debtors default.

The coming collapse of financial markets will have a major impact on all aspects of society. First, there will be mass unemployment. Most countries massage the employment figures. Real US unemployment is around 22%. The 3.9% unemployment reported last week is pure fiction. There are 96 million Americans capable of working who are not in the workforce, but they are conveniently excluded from the fake statistics. The real figure in the coming depression is likely to be well above the 25% that the US experienced during the 1930s. The same will happen in all industrialized countries.

Most people in the West live from paycheck to paycheck. With credit card, mortgage, student and car debt to finance, they would quickly default once their paycheck stops. In 1980, the average American had a debt which was 2x his monthly wage. Today it is 5x. Over 50% of US children live in a home that receives help from the Federal government.

Until now, socialism has taken care of virtually everyone who couldn’t make ends meet. In Europe we have had socialism in most countries for decades. Gradually the US has also become a socialist country. And socialism has appeared to be the perfect political system for creating eternal wealth and buying votes. The only problem is that ‘socialism only works until you run out of other people’s money.’

The Coming Panic
As government debt and interest rates rise together, more and more fiat money will need to be printed to finance defaults, failing banks, exploding derivatives, and rapidly rising government expenditures, including social security payments, imploding pension funds, collapsing tax revenues, etc. The list of holes to plug will be endless.

As hyperinflation takes hold and money printing makes most currencies worthless, governments will attempt to create crypto based electronic money but this will just be another form of fake money and won’t succeed. I don’t think there will be an orderly global reset because major powers will not agree. China and Russia will do their own thing and so will the US. The EU will probably be in a total mess at that time as will the Euro. Banks in Italy, Greece, Spain, France, the UK, Germany, etc, will all fail.

Any money in the bank anywhere in the world will either be lost by insolvency, bail-ins, or total debasement of the currency. Many of the other assets held in a bank could face a similar fate.

Cassandras are never liked, neither before the event they predict nor after it has happened. I have often stated that I hope that my forecasts are wrong because if they come true it will be devastating for the world. Most people will only be wise after the event. What is clear is that the risks are massive and wealth protection means taking steps before the event and that time is now.

The Most Important Gift
The most important asset human beings have been gifted with is their brain and their genes, including their health. Anything material we can lose, however well we protect it. But survival depends mostly on how you use your brain, as long as you are healthy of course. Even the best plans can go wrong. Remember “The times they are a-changing.” Thus, we must be prepared for the unexpected and react if necessary.

It will not be a static and easily predictable course of events. There will be panic moments and there will be seemingly quiet times. But the trend will be very clear — strongly down in the world economy and financial markets. It might take ten years or longer. Nobody knows. What is important is to surround yourself with a supportive group of friends and family as well as other people who will be useful like trusted financial experts, doctors, farmers, tradesmen, etc. And remember, this too shall pass…For those who would like to read more of Egon von Greyerz’s fantastic articles CLICK HERE.

KWN has now released the outstanding audio interview with Bill Fleckenstein discussing what he believes is in store for the stock market, gold, silver, bonds, China, and much more, and you can listen to it by CLICKING HERE OR ON THE IMAGE BELOW.

ALSO RELEASED: Michael Oliver: Something Big Is Underway, And Despite Pullback, Gold’s Rise Will Accelerate CLICK HERE TO READ.

Chaos, Propaganda And Why This Global Panic Will Be So Brutal