As the world edges closer to the next crisis, today the man who has become legendary for his predictions on QE and historic moves in currencies told King World News that gold and silver are about to kickoff the most spectacular bull markets the world has ever seen.

In the 1970s, we had high inflation, weakening currencies and recessions in most countries. I remember that time well. I lived in the UK and experienced a global oil crisis, a coal miners’ strike, and shortages of various products. In 1974, businesses could only operate with electricity for three days per week. I was involved in retailing with Dixons, which later became the UK’s biggest consumer electronics retailer and a FTSE 100 company. We sold televisions and other electric products with candlelight. Dixons’ share price went down 94% (and so did my first options), although the company was always profitable and well financed. My first mortgage went to 21% for a period. 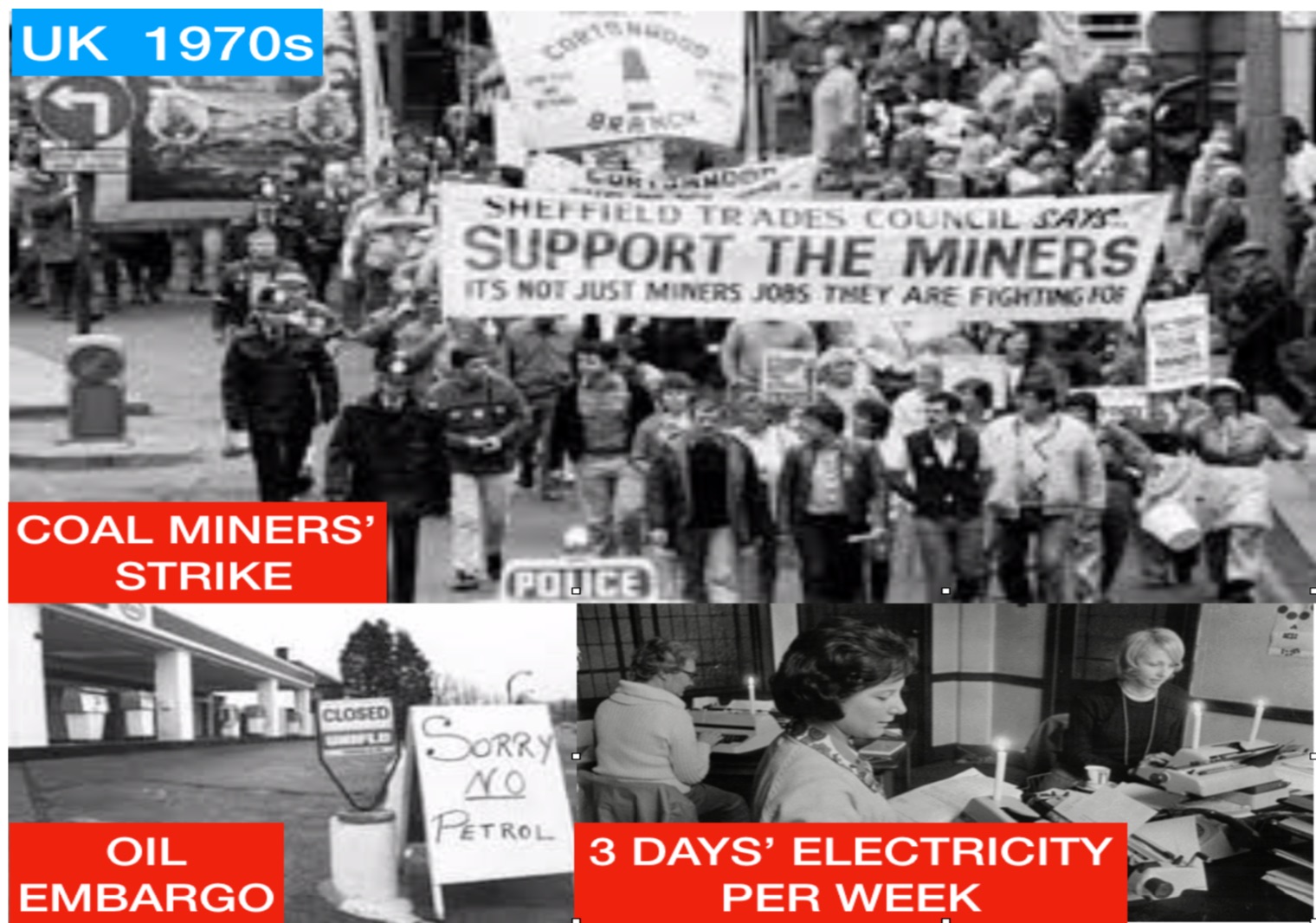 So I was fortunate to learn very early in my career what could happen to a country’s economy. Times were hard but there was no depression and most people had a job. What we must remember is that in August of 1971, Nixon took away the gold backing of the dollar and that opened the floodgates for the credit creation and money printing that we are now in the final stages of…

Since 1971, the dollar has lost 97% in purchasing power, and even at today’s level, the dollar is massively overvalued. 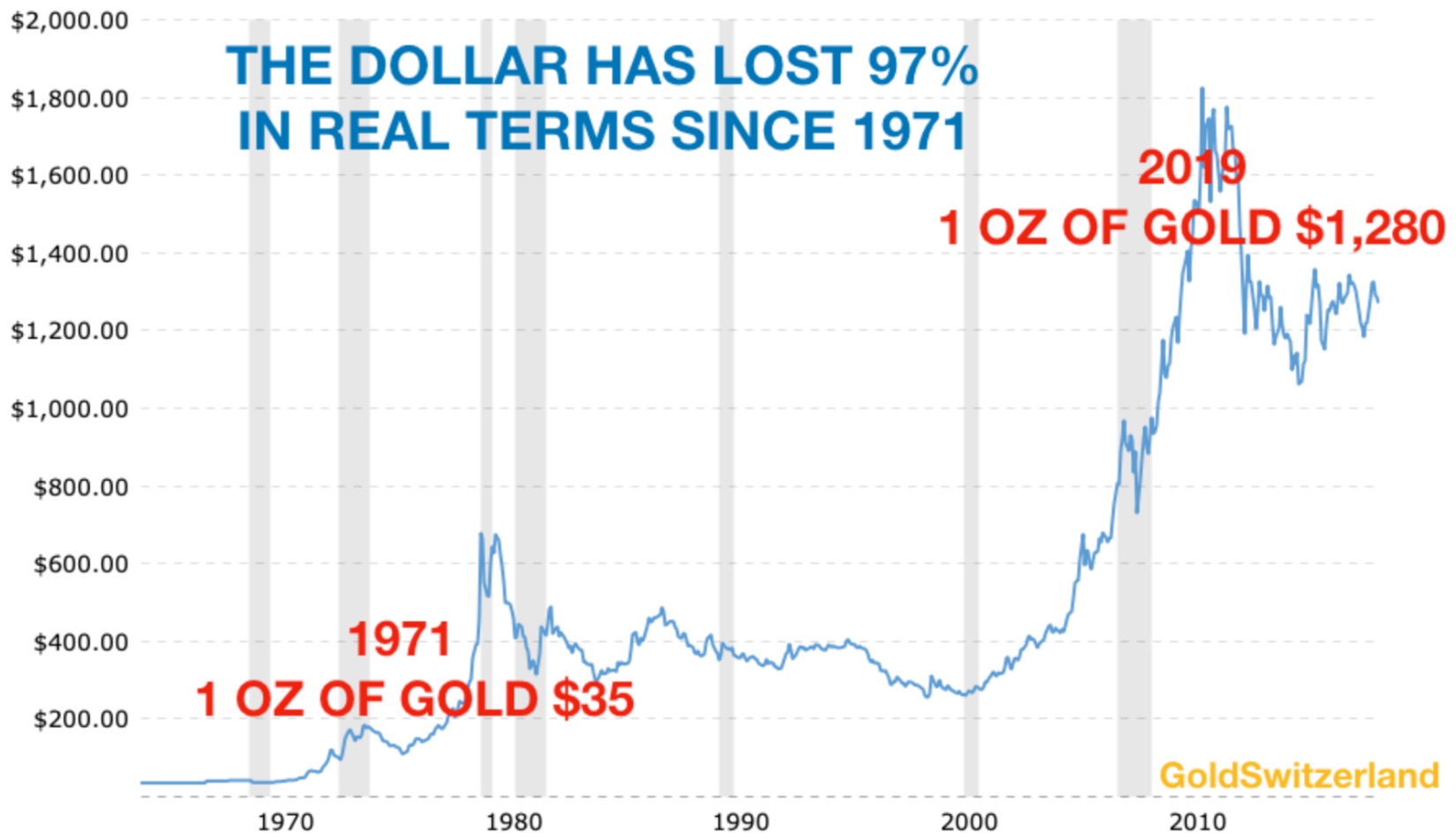 Although I sincerely hope that gold will not reach $10,000 or more, I am absolutely convinced that this is very likely to happen. This next crisis a much higher gold price will not just reflect inflation and falling currencies, like in the 1970s, but a much more serious or even catastrophic situation both in the US and globally.

So let’s look at a potential scenario for the next few years. This is obviously not a forecast but more of a rough sketch of what we could see in coming years:

I will start by sticking my neck out. Since 2001, we have been right about the risks in the world and gold’s role to protect against these risks. Early in 2002, we entered the physical gold market in a substantial way for ourselves and the people we advised. The ride from $300 in 2002 to $1,920 in 2011 was spectacular. But the gold price rise was just a confirmation of the risks that we had identified, which led to the 2007-9 financial crisis.

Postponing The Eventual Collapse
The world financial system was minutes away from going under in 2008 but was saved with tens of trillions of printed money issued by the Fed and other central banks around the world. This did not save the world but postponed the eventual collapse. What you learn after a long life of experiences at all levels is that things take longer than you think. There is always a danger to believe that when you see a major problem in the economy that it will materialize very quickly. We have now learned that things can take a lot longer than you expect. Thus, patience is a very important virtue that is learned from a long life of experiences.

10 Years Later
Today over 10 years have passed since the culmination of the Great Financial Crisis. The optimism is as great as ever. Stock, bond and property markets, are at, or near the highs. So the world has learned nothing. The cause of the problem in 2007-9 was debt in various forms, including derivatives, and today, with global debt having doubled since 2006, the risk position is exponentially more explosive. 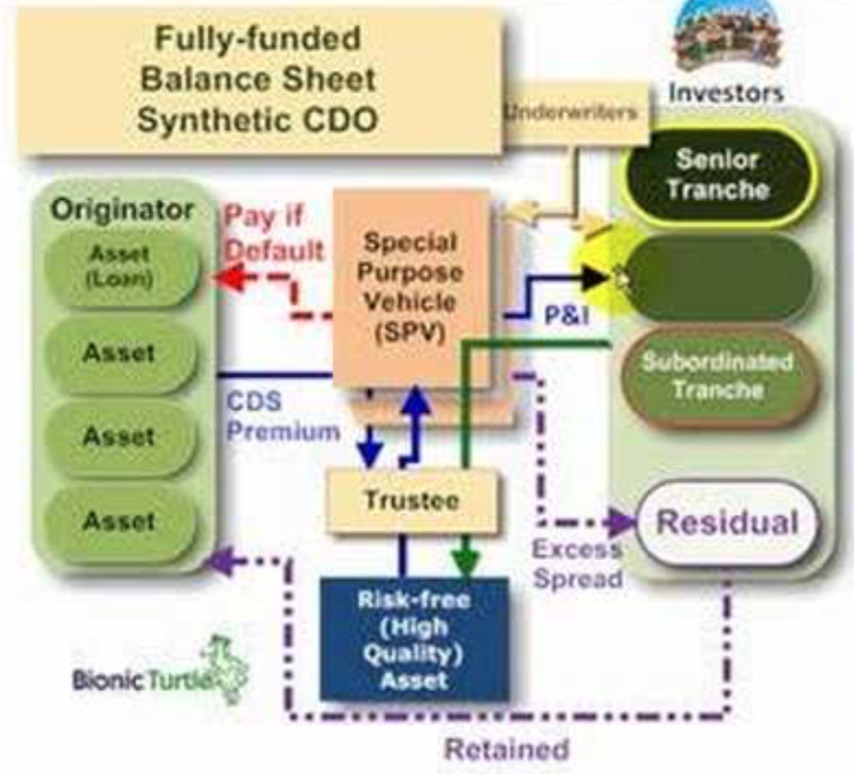 The trigger last time was derivatives on mortgage debt. But clearly the world has a short memory since the synthetic CDO market (Collateralized Debt Obligations) is back with a vengeance. US synthetic CDOs have grown 40% this year. This time the CDOs are not on mortgages but on corporate debt. That market is considered a lot safer than the mortgage CDOs according to the issuers, which are banks like Citigroup, Barclays, BNP Paribas, and Societe Generale.

Well that’s what they always say. But today if we look at corporate debt it is at an all-time high vs GDP, which is at 73%, up from 45% in 1971.The synthetic CDO is a highly leveraged instrument that can involve multiple bets on the same loans. So these CDOs are just another example of “the more it changes, the more it stays the same.” In other words, global debts are at an all-time high and the dangerous derivatives we saw last time are back.

There Are Bubbles Everywhere
The 2007-9 crisis was only a rehearsal for what we are to see next. The rubber band is now stretched to a maximum and there are bubbles everywhere. Just like the world on the surface seems to have been functioning for ten years since the crisis, why couldn’t this continue for another ten years? Yes, in theory it could but at some stage we will reach the point when that little boy calls out “the Emperor has no clothes.” There is clearly a limit to how long the laws of nature can be broken and how long the world can live on air or manufactured money that has zero value since it has been created without any counter-performance.

But as we have experienced, bubbles can last a lot longer than we expect. The best way to time a market turn is with technical analysis and that is of course not fool proof either. Nevertheless, from many aspects, both fundamental and technical, 2019 looks like the year when we could experience a turn in markets and the world economy.

Our proprietary long term cycle system points towards a potential top in the US stock market in the week May 13-18. The same system did forecast the Aug-Sep 2011 top in gold many months in advance. A cycle system can of course never predict the magnitude of the turn. Interestingly, the brilliant technical analyst Bob McHugh (Technical Indicator Index) also has a turning point for the stock market around mid-May. So middle of May could be a very important time for a stock market turn. Stocks should move up until this point and thereafter either start a secular bear market lasting many years or at least decline substantially in a correction. In any case, global stock markets are very likely to start their long term downtrend in 2019.

Gold & Silver
Gold and silver are finalizing their corrections now. We might have seen the correction lows already. If not, they should happen in the next 2-3 weeks. The gold-silver ratio just made a new high above 87 and reversed quickly by 1.5% on Friday. From a technical perspective, the high on the daily, weekly, and monthly indicators, was not confirmed by momentum indicators. This is called a bearish divergence and is an important sign of a market turning down. 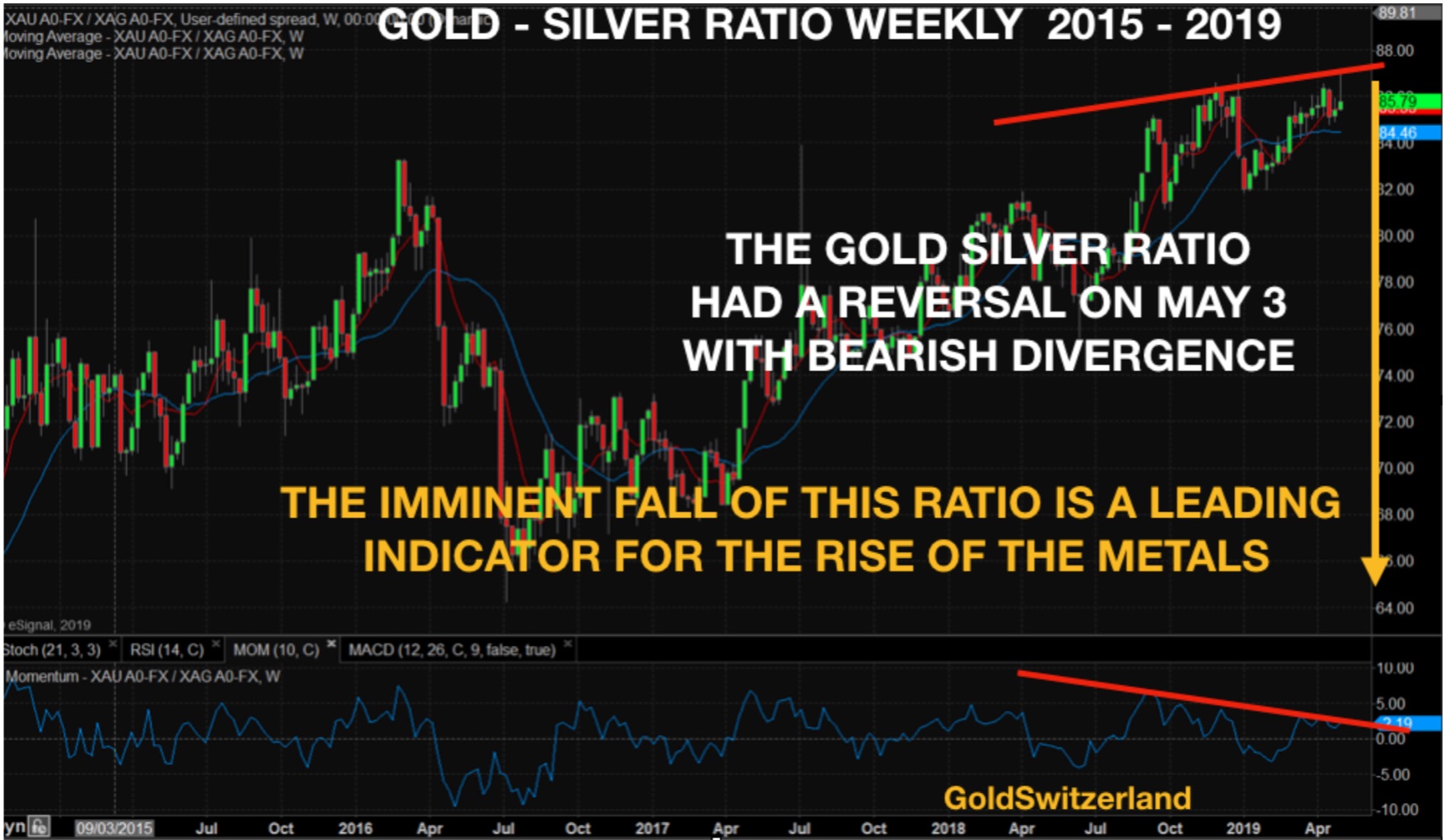 I have often said that silver is the leading indicator for the precious metals. Thus silver will take the lead in the coming precious metals bull market. It could be that we already saw the turn last Friday. If not, it should happen later in later in May.

I normally don’t go into detailed technical analysis, but since we could potentially be at very important turning points, it is important to mention this since fundamental analysis will not help us with short term timing.

The Most Spectacular Bull Markets The World Has Ever Seen
The metals are now ready to start the most spectacular bull markets that the world has ever seen. This market is like a coiled spring and we will see rapid moves to the upside in both gold and silver. The first target for gold, which could be reached quickly, is $1,600. At the same time, silver will probably go to at least $25.

As I discussed at the beginning, sadly, a higher gold and silver price is associated with difficult conditions in the world, both economically and socially. But initially the move will happen before the difficult times start.

Wealth preservation investors must remember that the forecasts above are about short term timing and not about protecting your wealth. The risks in the world are now of a magnitude that any serious investors who wants to avoid a total annihilation of their wealth must reduce their exposure to all the bubble assets, stocks, bonds, and property, as well as to the banking system.

Gold and silver have always been the ultimate insurance in any period of crisis. Since the coming collapse is likely to be greater than anything seen in history, the protection against the present risks in the system must also be greater. In these circumstances, I consider that 25% in physical gold and silver is an absolute minimum. I know it might sound dramatic to many people but what is going to happen to the world economy and financial markets will also be spectacularly dramatic. Therefore, it is absolutely essential to hold adequate protection…For those who would like to read more of Egon von Greyerz’s fantastic articles CLICK HERE.

***Also just released: Adrian Day – Here Are A Couple Of Strategies To Employ While Waiting For Gold To Breakout CLICK HERE TO READ.

Here Is Where Things Stand In The Gold, Silver And Currency Markets