Today the man who has become legendary for his predictions on QE and historic moves in currencies and metals just sent King World News his latest work on gold and the coming global economic meltdown.

June 20 (King World News) – Egon von Greyerz at Matterhorn Asset Management (based in Switzerland):  When will the wax melt that holds up the global economy? Hubris is driving humans and markets ever higher and closer to the sun. The higher everything goes, the greater the risk that the wax melts and the wings that are supporting the global economy just fall off and everything crashes to the ground. 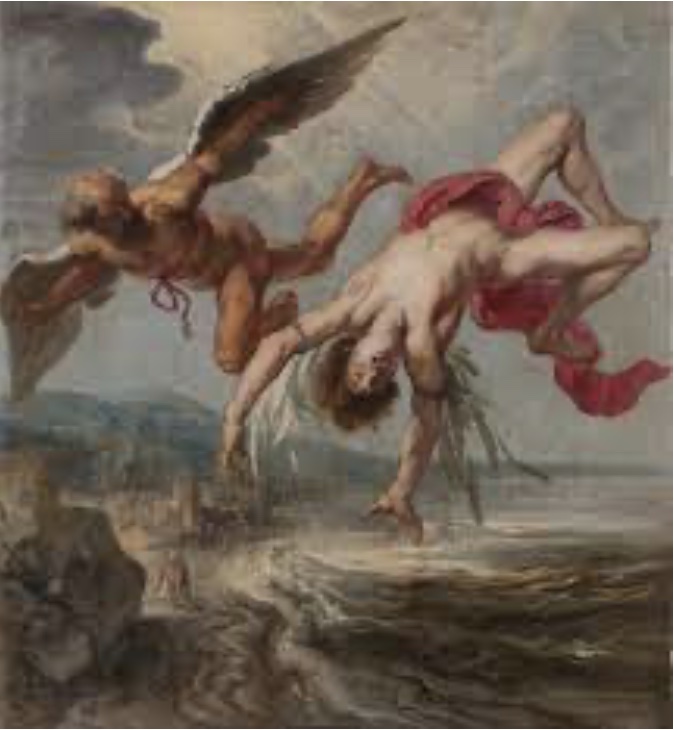 Investing successfully is primarily about managing risk rather than maximizing profits. As we reach the end of the biggest bull market in history, investors feel so secure that risk has become an irrelevance.

HOCUS POCUS SYSTEM – THE SAVIOUR OF STOCKS
The Hocus Pocus system of finance has offered total downside protection for investors for 1/2 a century. The last big crash that affected a whole generation was the 1929 crash. After a 90% fall in the Dow, it took 1/4 of a century to recover to the 1929 high.

This is the beauty of Hocus Pocus finance. Through printing and credit expansion you create unlimited access to liquidity for the big investors. Virtually no funds reach ordinary people who need it but instead the Hocus Focus system rewards the Croesus investors which means the haves get more and the have nots become relatively much poorer.

As the graphs below show, the bottom 50% hold 0.6% of corporate equities and Mutual Funds whilst the top 1% hold over 52%. 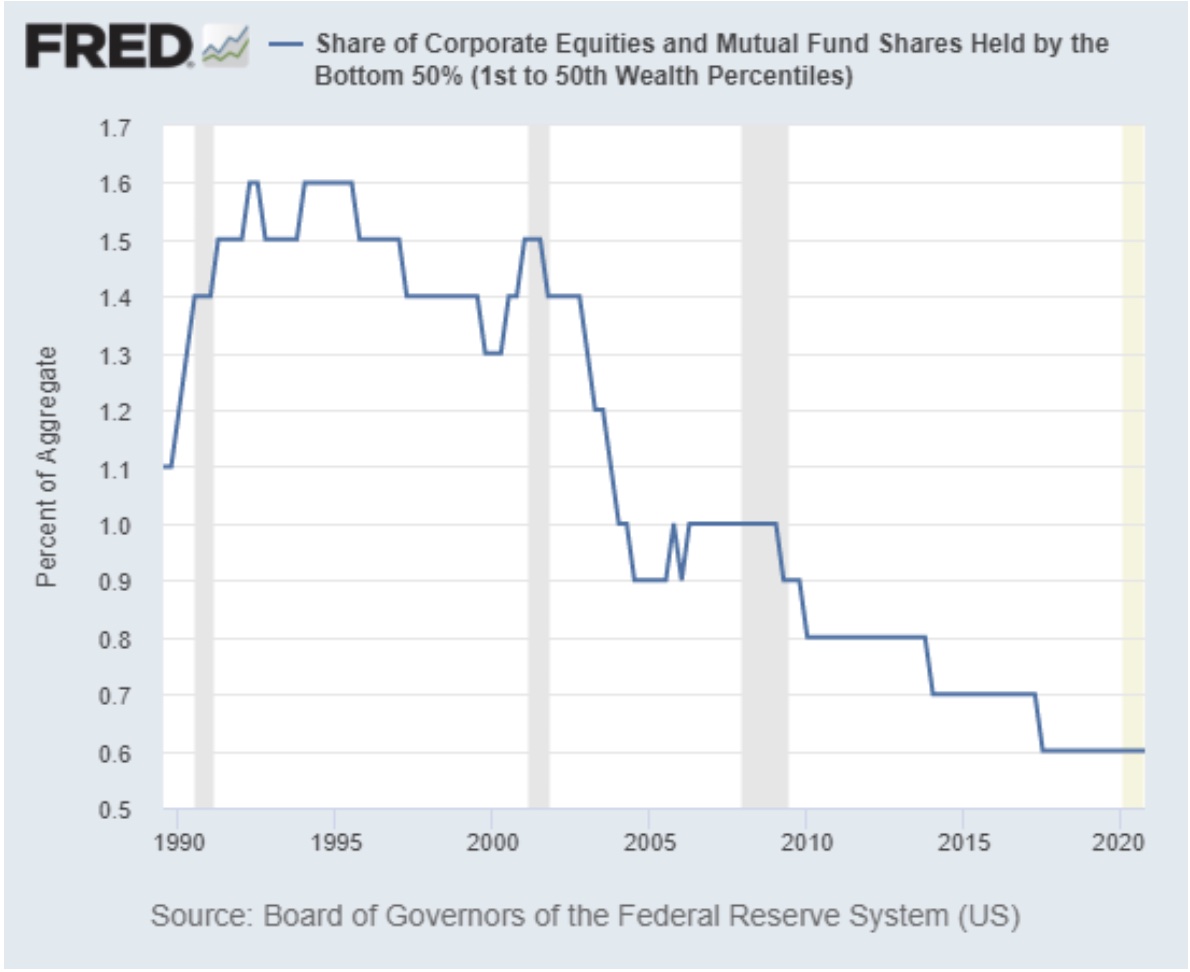 Income inequality is also expanding with the top 10% of earners getting just below 50% of income. As the graph shows, Europe is more egalitarian. 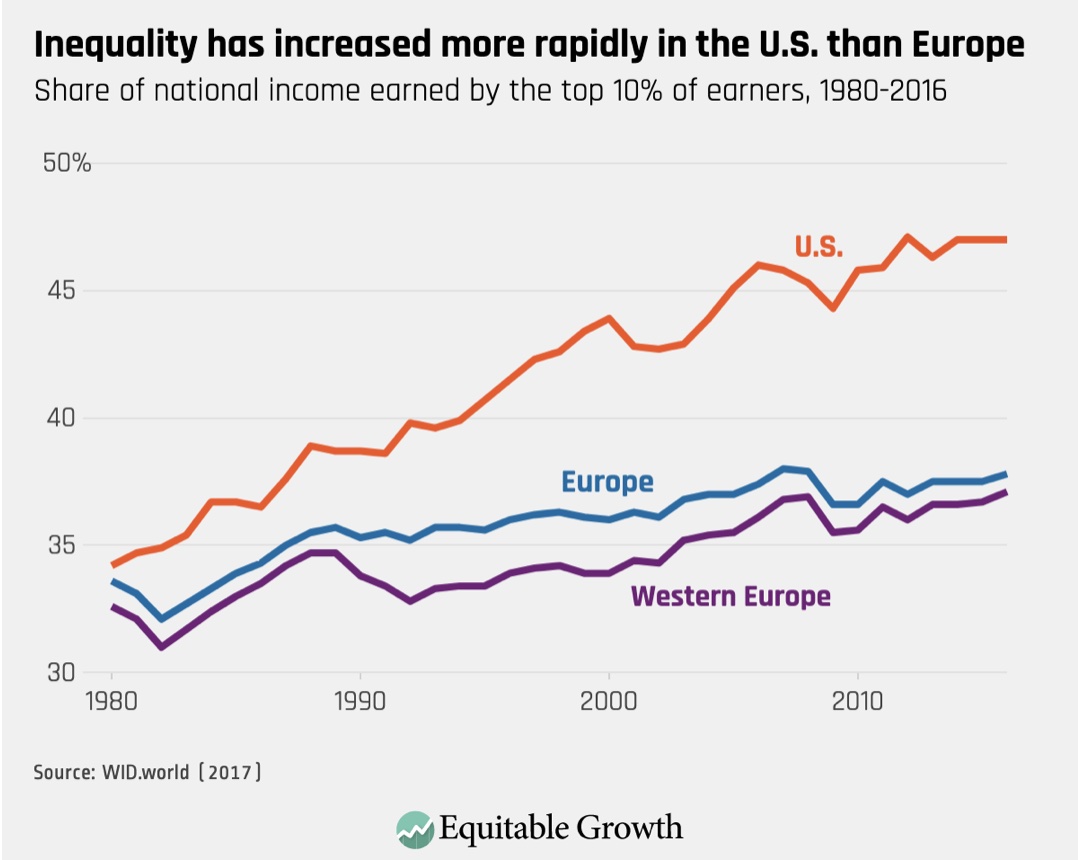 REVOLUTION, WIPEOUT OR BOTH
The inequality of wealth and income can correct itself in two distinct ways.

Either a revolution like in France in the late 1700s or Russia in the early 1900s. This would lead to a general fall in economic activity and redistribution of wealth in a new Marxist system. Asset markets would crash leading to everyone being worse off until Marxism is rejected by the people. In Russia that process took around 70 years last time.

The other way is a collapse of asset markets leading to a massive wipeout of the wealth of the rich. The poor would also be worse off due to the general deterioration in the economy…

THE WAX OF THE EVERYTHING BUBBLE IS MELTING
So coming back to when the wax holding it all precariously actually melts, let’s return to the Greek mythology.

Daedalus and his son Icarus were imprisoned by King Minos in the Labyrinth that Daedalus had built. The only way out was to fly and Daedalus came up with the idea to make bird wings that were attached to their bodies with wax. They managed to flee from the labyrinth using their wings. Icarus had been warned by his father not to fly too close to the sun as the wax would melt and he would crash. But carelessness and hubris couldn’t stop Icarus from reaching ever higher until the wax melted and he crashed to his death.

As the Everything Bubble is flying closer to the sun, the risk of the wax melting is growing exponentially.

The wax holding it all together needs a number of ingredients, to stick such as:

Take away one or two of these ingredients and the wax will start melting and the whole global economy will crash to the ground.

But who really cares about the wax that holds the world economy together. I and a few others have written about the problems we see and the risks we perceive. Also we discuss the consequences that will affect most people.

But whilst some of us believe that our message is of vital importance to everyone, we are sadly only reaching a minuscule minority of people.  As the  income and wealth graphs show above, even in the Western world, most people have no assets to protect and an income that barely covers their daily outgoings.

HOCUS POCUS SYSTEM CANNOT STOP MELTING OF WAX
As I often stress normal people without major savings can still buy gold and silver for wealth preservation. With 1 gram of gold costing $60 and an ounce of silver $30 virtually everyone can put some savings into precious metals. If the Venezuelans had done that 20 years ago with very small money, that would have saved them from total destitution.

I sometimes hear from people who are poor investors and even worse traders. These are people who are victims and never take responsibility for their own actions.

Even worse, they buy at the top and sell at the bottom. And then they are experts in the most exact of all sciences, namely HINDSIGHT!

Sadly these are people who will never make money consistently on anything since they can’t take responsibility for their own actions.

Also, they don’t comprehend that the primary purpose of holding gold or silver is to protect your wealth against the wax melting i.e. the massive risks of the everything bubble crashing to the ground.

Also, they don’t understand that the main purpose of precious metals is wealth preservation or insurance against a rotten financial system and a constant debasement of currencies until they reach ZERO as the table below shows. 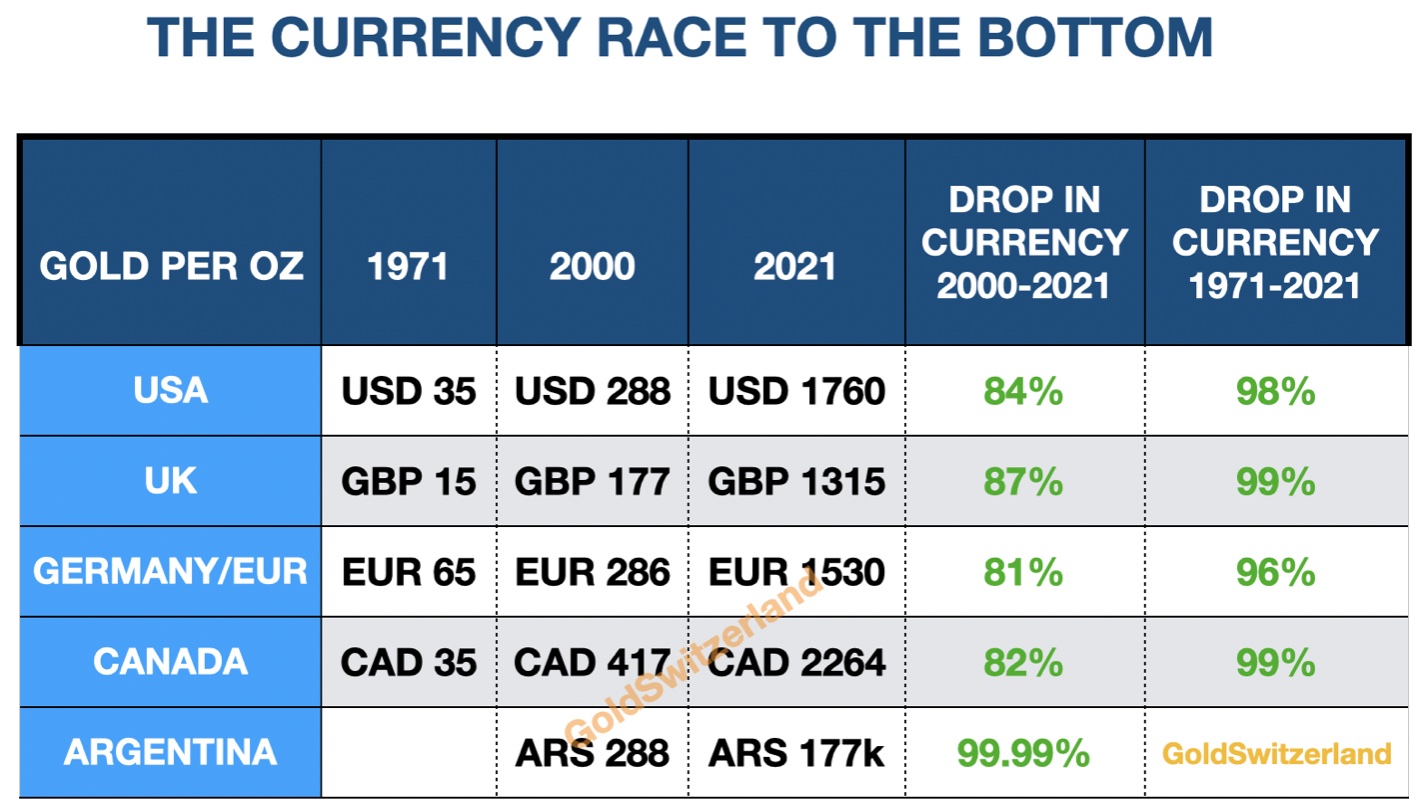 GOLD AND SILVER UPTREND IN TACT
Technically, the precious metals are going through a minor correction which probably will not last much longer. The next move will be to $1,950 for gold on the way to $3,000 initially. Silver is likely to soon reach $30 on the way to $50 and beyond.

These prices are probable medium term targets to much higher levels as the currency system collapses.

As the currencies start their next debasement move, holding gold and silver is imperative.

Gold looks extremely strong technically as the chart in this article shows. But I must stress again that investors must not focus on price but on long term insurance and wealth protection.

INSTITUTIONAL GOLD DEMAND WILL DRIVE THE GOLD PRICE
Another factor which will drive the gold price is institutional gold investing for primarily inflation protection purposes. The latest pension fund to buy physical gold and store it in private vaults outside the banking system is CPEV for the canton of Vaud. They have switched out of hedge funds and into $600 million of physical gold.

Swiss institutions understand the importance of holding gold in physical form  outside the banking system rather than holding futures or gold ETFs.

I have explained the dangers of holding gold ETFs in this article from last year.

We are also advising clients not to hold gold in any bank, not even a Swiss Bank.

GOLD OFFERS INSTANT LIQUIDITY
What institutions appreciate with physical gold is that it represents instant liquidity.

Over $180 billion of gold (mostly paper gold) is traded every day. Gold can be bought and sold around the clock at the quoted spot price plus a small margin for physical delivery. 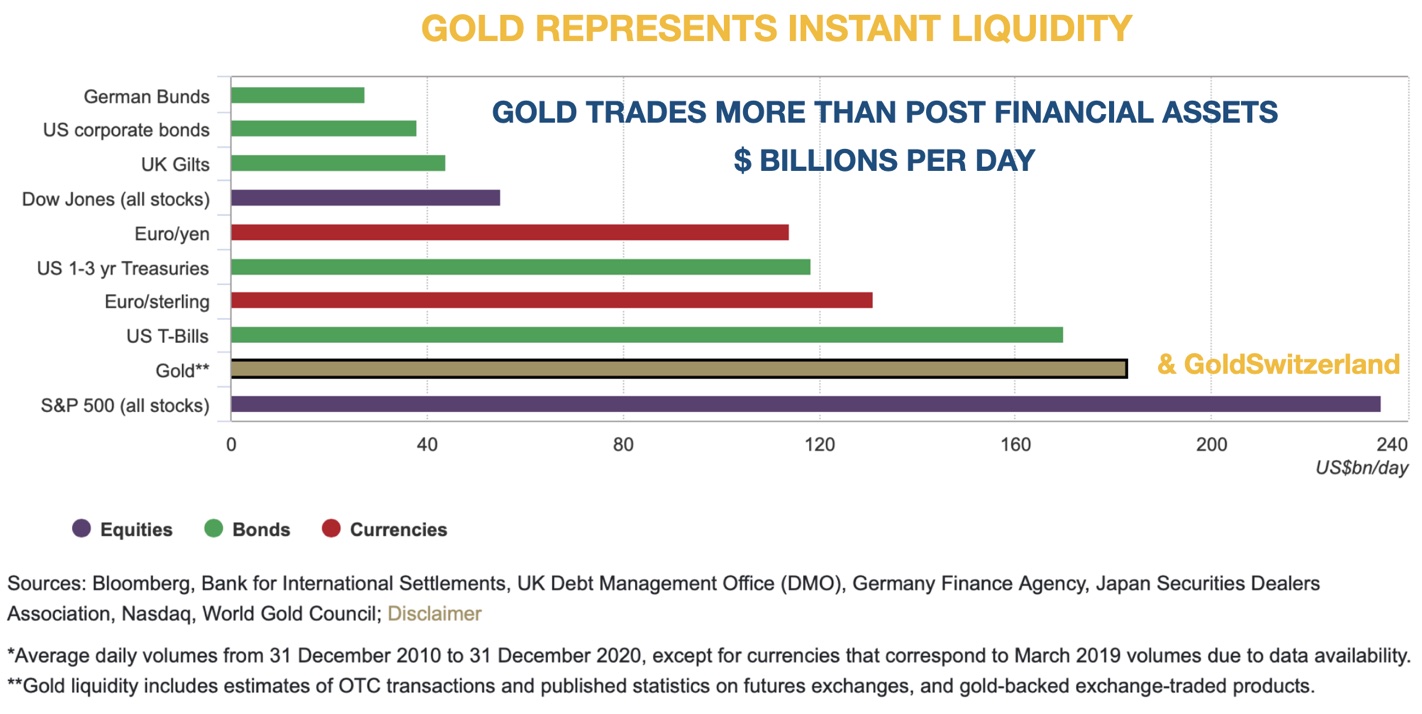 SWITZERLAND – A STRATEGIC GOLD HUB
Switzerland is the primary gold hub of the world. Over 70% of all the gold bars in the world are refined in Switzerland. Gold is 29% 0f Swiss exports and thus strategically important.

It is very important that investors have direct access to their own gold bars  in the vault without passing through an intermediary as this would represent a higher counterparty risk.

Also, any intermediary organising the purchase and storage of the gold must be a Swiss company. Holding gold in Switzerland organised by for example a US or UK company adds a layer of jurisdictional risk.

All gold held in Swiss private vaults are subject to Swiss regulatory control and compliance. Gold which does not comply with the fiscal laws of the beneficial holder is not accepted by any vault.

Swiss private vaults  have no reporting requirements to any country. This protects the confidentiality of the holder.

WORLD’S BIGGEST PRIVATE GOLD VAULT IN SWISS ALPS
The vault in the video below is a Swiss owned private vault in the Swiss Alps. It it  the biggest private gold vault in the world and the safest.