Today the man who has become legendary for his predictions on QE and historic moves in currencies and metals told King World News that people need to get out of the financial system now!

“The scholar does not consider gold and jade to be precious treasures, but loyalty and good faith.” — Confucius

May 30 (King World News) – Egon von Greyerz at Matterhorn Asset Management (based in Switzerland):  This article will discuss gold’s growing importance as the principal protector of wealth and also that the coming price evolution of gold will be dazzling as it reaches heights that no one can imagine.

But first let us observe Confucius’ words at the beginning of the article. There are many  real values that are much more precious than wealth or gold. Loyalty and good faith are clearly two of them. Also as I have many times stated, some of the best things in life are free, like family, close friends, nature, music, books and many more….

But with the risks and problems that are now facing the world, it is also our responsibility to protect our family and assist our friends in whatever way we can.

SYSTEMIC & CURRENCY RISK
There are two principal risks that need our attention:

These two risks are totally interrelated.

The systemic risk arises as a result of a 100+ year period (since the Fed was created in 1913) of deficit spending and debt explosion.

And since Nixon closed the gold window in 1971, things have gotten a lot worse. Debts and deficits have gone exponential and the fake GDP expansion could only be achieved with the creation of fake money fabricated by central and commercial banks.

All this money was created out of thin air. No one needed to work one hour for it and nobody needed to produce any goods or services against it. And today not even a printing press is needed. All that is required is pushing a button on a computer and trillions of dollars, euros etc just appear out of nothing.

HOCUS – POCUS
This is the biggest Hocus-Pocus scheme ever produced in history.

To further deceive the people, the so called experts have come up with the name MMT (Modern Monetary Theory).

When you need to deceive the people, you invent expressions which sound very fancy and creative like MMT or QE (Quantitative Easing). Both these two expressions mean forging money but that would clearly be too obvious. Much better to hide behind fancy words or a theory which no one understands, not even the inventors.

Is it possible that credit growth could be healthy for the economy?

Yes at certain times but not if you constantly need $3-5 of credit to create $1 of GDP.

And certainly not if you grow debt 31X and tax revenue only 6X which has been the case since Reagan became President in 1981.

And most definitively not if the Federal debt can only be financed at zero or negative interest rates. In the long term Investments must always equal Savings. But that fundamental law of nature and economics has been set aside by the MMT Wizards.

Remember that the Piper will always get his pay.

But the risk that the cost will be the survival of the whole financial system. MMT or money printing lasts until the world wakes up to the fact that there was no substance and no value in the money that inflated all the bubble assets of stocks, bonds, property, etc.

MONEY AND ASSETS MADE OF AIR
So if the money was created out of mainly Nitrogen and Oxygen or thin air, the value of the assets created must clearly be mainly air too.

The only thing that need to trigger the coming collapse is the evaporation of confidence. And once confidence goes so will the system with it.

But governments and central banks will clearly not give up without a final stand. This will involve money printing into the hundreds of trillions and eventually quadrillions as the global derivatives bubble implodes. Remember that when counterparty fails, the gross derivatives of $1.5 to $2 quadrillion will remain gross. Hyperinflation will obviously be the consequence as the currency collapses.

Because never before have so many countries been indebted to such a great extent with absolutely ZERO ability to repay the debt or to finance it proper market rates.

It is all really very simple. Extreme moves always return to the mean in normal times. But we haven’t had normal times in the last half century so the extreme swing of the pendulum to one side will result in a similar counter reaction.

IMPLOSION OF ASSETS
Thus after the massive creation of more fake money with zero economic benefit, all assets including paper money will implode with devastating effects on the world financial and economic situation. And that is how the world goes from a depressionary hyperinflation to  deflationary implosion and depression.

So this is in my view a very likely scenario in the next 3-10 years and probably sooner rather than later.

Remember that we are talking about probabilities and definitely not certainties. I can clearly be wrong but more likely in the timing than in the eventual outcome.

Thus in my view the systemic risk is greater than any time in history. What actually will happen only historians can tell us with certainty. Because hindsight is the most exact of all sciences!

Thus it is absolutely guaranteed that all currencies will lose the remaining 1-3%. The only question is how long it will take. Again, I would be surprised if it takes as much as 10 years. Between 3 and 5 years seems more likely.

So there we have it. Not a rosy scenario but the consequences of creating a world based on debt, fake money and deceit leading to a total lack of morality and real values.

But remember that countries and empires have gone through major forest fires before and life on earth has continued and advanced. So even though the coming setback that we are all facing is likely to be greater than the world has ever encountered before but it will create the foundation for future healthy growth.

WEALTH PRESERVATION
Wealth preservation is what it says, protecting current wealth and also generational wealth. European families who have survived financially for centuries have always had major portions of their assets in land and in physical gold.

Gold is a 100%-proof bet on the continued failure of governments’ monetary policies.

Or in other words, holding physical gold is like putting your money on black on a roulette table with only black numbers. You know that you will win every time as history proves with 100% certainty that governments will continue to destroy the currency and thus the economy.

So regardless if investors are in agreement with the systemic collapse that I have outlined above, no one can deny the currency collapse since that has happened without fail throughout history.

Governments are incapable of stopping deficits or money printing. The US for example has increased its debt every year since 1930 with four year’s exception. America is a bankrupt country but has managed to hang on to its reserve currency status until now. But this only at an enormous cost. Since Nixon “temporarily” took way the gold backing of the dollar in 1971, the dollar has lost 98% in real terms.

With the current state of the US economy and with Biden having already committed $6 trillion in his first 100 days, the dollar is guaranteed to implode.

The principal objective of a government is to be reelected and the only way to achieve that is to buy the people’s votes. Thousands of years of history proves that.

GOLD STANDS AS A PROTECTOR
In times of political and geopolitical upheaval gold also serves as a protector and life saver.

Gold is also your best protection against a rigged and totally corrupt financial system.

To take a few examples, just look at the Romans in 180 to 280 AD when the Denarius lost 100% of its silver content or the people in Uganda during Amin’s rule or in Yugoslavia during the hyperinflation of the early 1990s or in Venezuela today, to mention just a few examples in history. The list will fill a whole book.

Within the next 5 – 10 years investors are likely to lose in excess of 90% of their wealth.

The likelihood of having nothing left in real terms is substantial just from currency risk.

GET OUT OF THE SYSTEM
So now is the time to get out of the financial system for a major part of your assets and invest in physical gold and silver.

The average investor hasn’t got a clue of the REAL return on investment. REAL in this case means measured in stable money. And the only stable money in history, WITHOUT EXCEPTION, is of course gold.

No one must believe that measuring your wealth in the US dollars for example has got anything to do with the REAL performance.

Wealth preservation is now paramount and that involves not having the majority of your assets in paper wealth within a shaky financial system.

GOLD AT THE CREST OF A MAJOR BULL MARKET
Gold began this bull market in 2000. But it is really a bear market in currencies and in paper assets which we are facing. 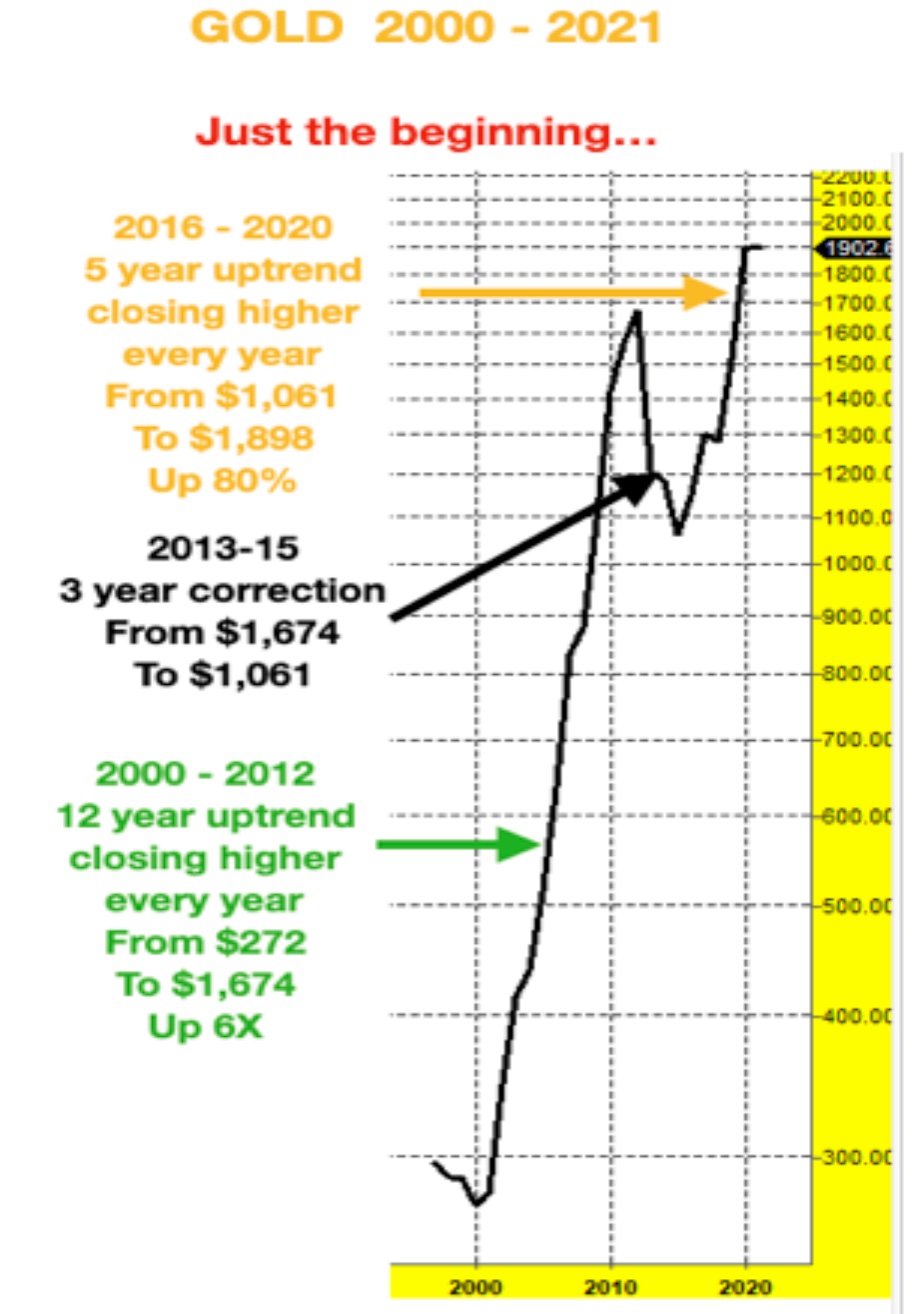 There is no better asset than gold to protect against the systemic and currency risk which the world is facing. But it is not just a matter of wealth preservation as I expect gold to also generate substantial wealth enhancement in coming years…This will link you directly to more fantastic articles from Egon von Greyerz CLICK HERE.