Greyerz – Crushing Debt Will Usher In A Global Implosion

As the world edges closer to the next crisis, today the man who has become legendary for his predictions on QE and historic moves in currencies, told King World News that crushing debt in the West will usher in a global implosion.

“The rich rules over the poor, and the borrower becomes the lender’s slave.” — Solomon

A Sword Of Damocles
July 8 (King World News) – Egon von Greyerz:  “This is the story about Debtor, a newborn American baby. Debtor has just been born into the greatest economy in the world, a land full of promises and opportunities. This is what his parents tell him. But unbeknown to Debtor, he has been given a very bad start in life. The parents haven’t told Debtor, and how could they since they are not aware themselves, that he starts life with a massive debt burden that will grow manifold during his lifetime…

King Solomon’s words will ring true for almost every American born today. The average American is already a debt slave at birth. And by the time he dies, his debt will have increased exponentially, thus passing on an even bigger debt and greater enslavement to the next generation. This is a vicious circle that has gone on for over 100 years. A very small elite has become incredibly wealthy and the masses have become enslaved by private and government debt.

For the majority of people it will be impossible to extricate themselves from this massive stone of debt around their neck. Instead they will add to the debt by taking on more debt. But the government will also do their part. They will at least double the national debt every 8 years as they have been doing for several decades (see last week’s KWN article). Starting from $21 trillion debt today and assuming that Debtor will live until he or she is 88 years old, a doubling of the debt every 8 years would lead to a $43 quadrillion federal debt in 2106.

Most of us will of course not be around to check that forecast, but since it is just an extrapolation of long term trends, it is difficult to argue with although a lot can happen in 88 years. Even the $43 trillion US debt in 2106 could be conservative. Higher deficits and higher interest rates, both being likely, could multiply the $43 trillion many, many times.

I am sure that no one expected in 1981, when Reagan started with a $900 billion debt, that the US debt would have gone up 23x to $21 trillion, 37 years later. No one likes forecasting the truth because the truth looks horrific when it comes to all the mismanaged economies in the world. But the federal debt is of course only a smaller portion of the total debt and liabilities that Debtor and his fellow Americans are responsible for. The biggest burden will be the unfunded liabilities of Medicare and Social Security. Professor Laurence Kotlikoff has calculated that these amount to $220 trillion. That is 10x current federal debt and a liability that is unlikely to ever be funded. The best solution would of course be a miraculous increase in prosperity and tax revenues, but at this point that is very unlikely. 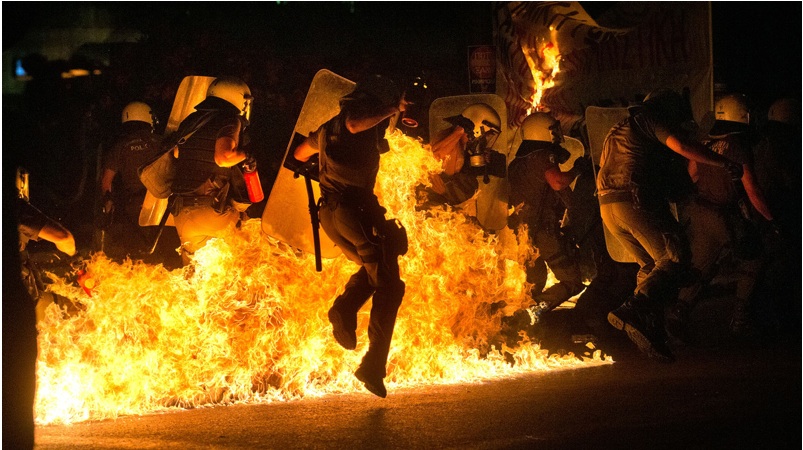 Another alternative would be that Debtor and his young friends spend all their working life just to pay the pension and medical costs of the older generation. This is also unlikely, plus it would lead to a revolution. More likely is that the government will just create more debt to pay for these commitments. We know that a debt problem will not be solved by incurring more debt and whatever additional money the government will create out of thin air will have zero value and therefore zero effect. So that leaves the option that there will be virtually no medical care or pension for Debtor and his fellow Americans. This will lead to civil unrest as well as poverty, famine and disease. Not a very desirable outcome but sadly very likely.

If we take the US population of 325 million, Debtor will be responsible for his share of all outstanding government debt and unfunded liabilities. That means 1/325 millionth of $21 trillion or $65,000 of debt is what Debtor starts off with as a baby. He clearly didn’t deserve that and when you look at the population as a whole, they will never be able to repay it.

Debtor also needs to take responsibility for his share of unfunded liabilities, which is 1/325 millionth of $220 trillion or $650,000. His parents never told him this because they were brought up in an era when the government just printed or borrowed money whenever a need arose. The parents never understood that their government constantly spent money that didn’t exist. They clearly hadn’t read Charles Dickens’ David Copperfield and nor had their government:

The government never told Debtor’s parents that it always spent more money than it had and that this eventually would lead to misery for the US and for virtually every American. The government could not tell Debtor’s parents and the US people that it totally mismanaged the economy. The principal aim of the US government (as well as most governments) is to be re-elected. And the best way to achieve that is to buy votes by bribing the people. But this has been a costly affair since the US government has not been able to make ends meet since 1960. Thus, for almost 60 years the US government has spent more money than it has collected from taxpayers in order to buy votes.

Once the newborn Debtor comes of age he will argue that he didn’t incur the debts and liabilities and therefore he will refuse to pay them. It obviously doesn’t matter if he refuses or not as he is not in a position to even pay the interest on the liabilities. In addition to his inherited debts, Debtor will, during his lifetime, continue to incur all the debts that every US citizen does. These will include credit card debt as well as student, auto and mortgage loans. As the chart below shows, these debts have gone from just over $7 trillion in 2003 to almost $14 trillion today. During Debtor’s lifetime, total consumer loans will grow from $14 trillion today to $100s of trillions. Debtor will of course have no ability to repay his loans and nor will any of his fellow US citizens.

CONSUMER LOANS IN THE US 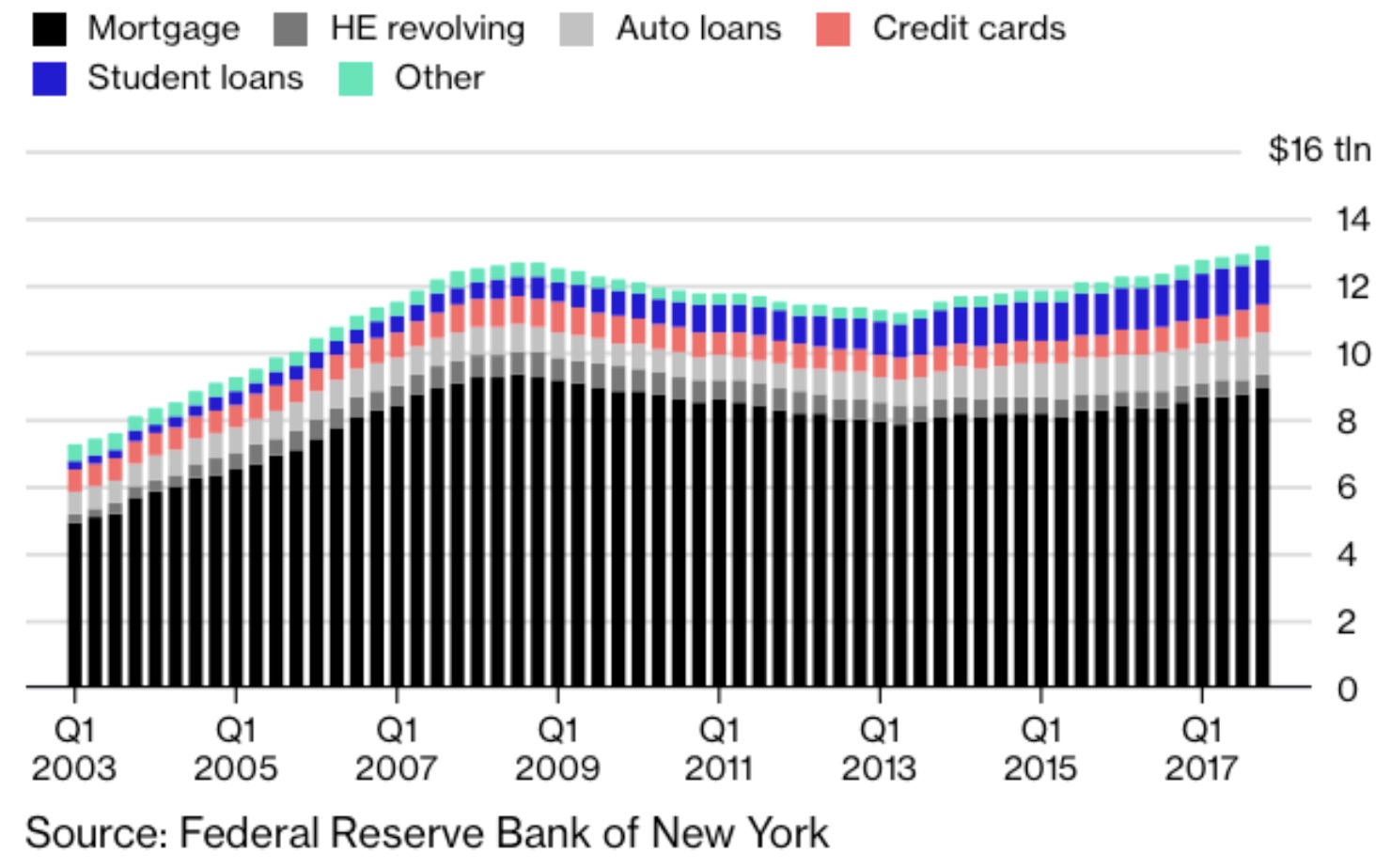 Many debts are likely to be forgiven by the government, but what most people don’t understand is that their government can’t just wave their magic wand and forgive or write-off debts without consequences. Someone will always have to take the pain of making debts disappear, whether it is savers, pension funds or other investors. On the other side of a debt is an asset which will decline in value proportionately to the debt. So when debts disappear, whether it is by defaults or write offs, there will simultaneously be an implosion of asset values.

The US government, as well, as many other governments, for over half a century bribed the people with social security, welfare and medical care at the expense of future generations. Debtor’s parents and their fellow Americans never understood that the country couldn’t actually afford the standard of living that it was providing. The common belief in all Western economies today is that the government will always take care of you. No citizen ever asks: “WHERE IS THE MONEY COMING FROM?” According to Kotlikoff it isn’t coming from anywhere. When he recently commented on Trump’s tax bill, he stated: The US is dead broke. This leaves a fiscal Sword of Damocles hanging over our children’s economic futures.

So what is the solution? Well, there isn’t any. The US, together with many countries in the world, is leading its people to perdition. This will include massive debt defaults and a deflationary implosion of most asset values. But before that takes place, governments will separately try to save their economies by printing unlimited amounts of worthless money. This will of course not save the economy but instead lead to hyperinflation and collapsing currencies.

What will happen to Debtor, who was unlucky to be born at the top of the biggest economic bubble in global history? The good thing for Debtor is that all his debts together with the country’s debts will disappear in a black hole. But so will also his savings and investments if he or she is fortunate enough to have any. So Debtor will have a tough start in life. Hopefully during their 88 years they will have a chance to rebuild their finances. Just imagine if their parents had just a little bit of foresight and gave them some gold. Even a small amount would make a very significant difference to their life when things finally come unraveled.”

ALSO JUST RELEASED: After Another Wild Trading Week, Look At What Is Happening In The Gold Market CLICK HERE TO READ.